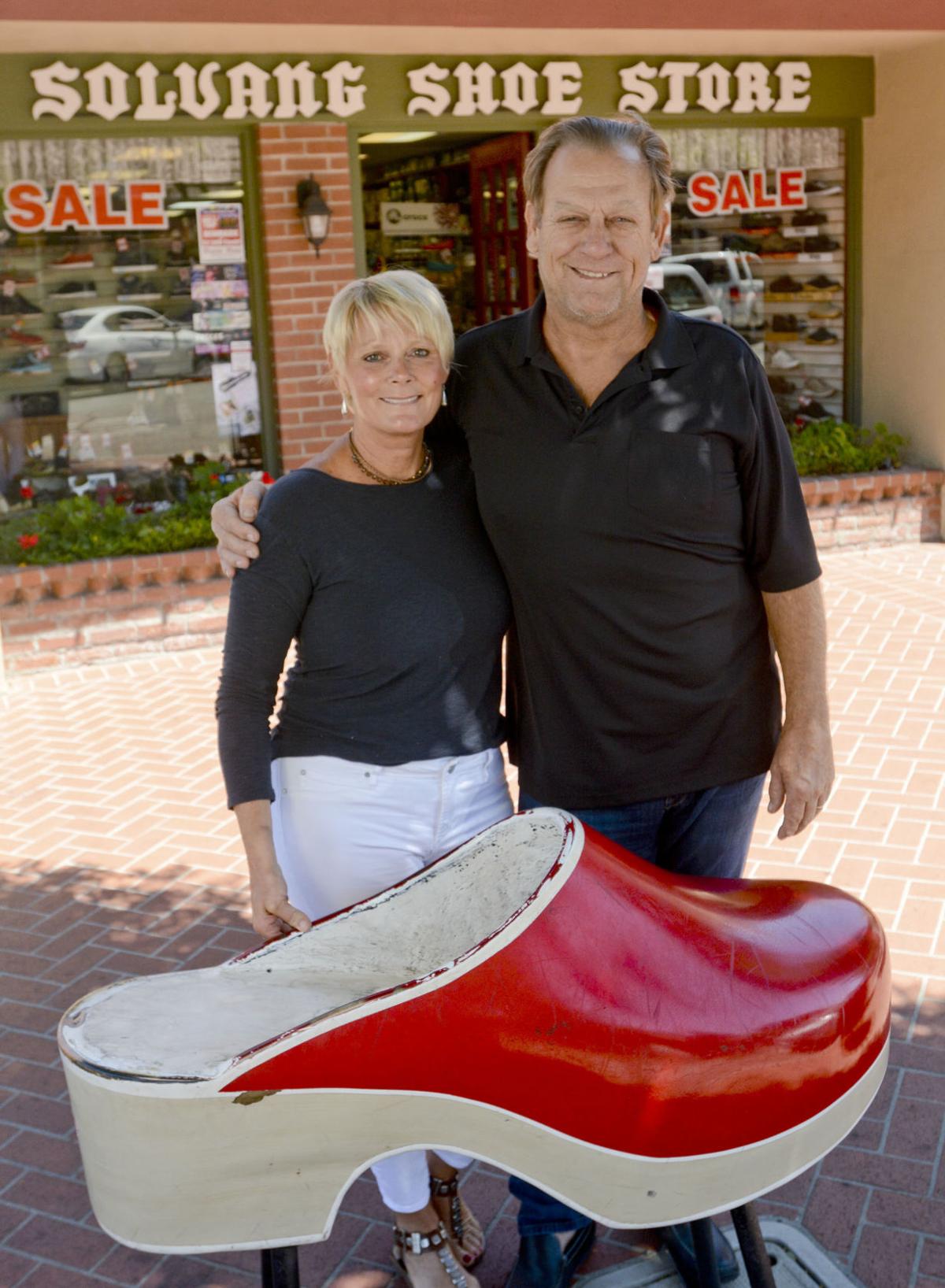 Max and his wife Laura Hanberg own the Solvang Shoe Store, in Solvang. 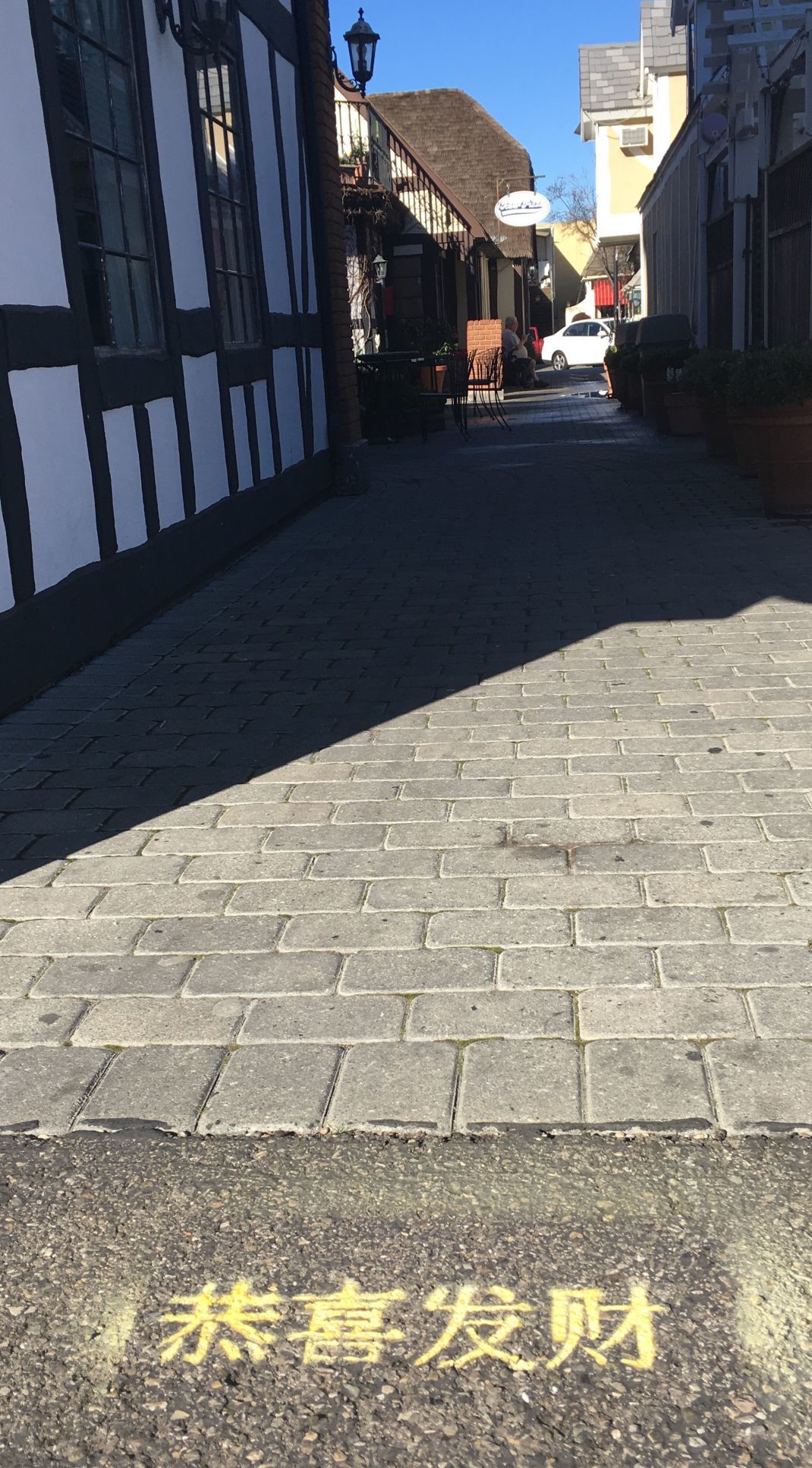 A temporary chalk stencil in Mandarin Chinese issues a traditional Chinese New Year greeting on a Solvang sidewalk in 2018. 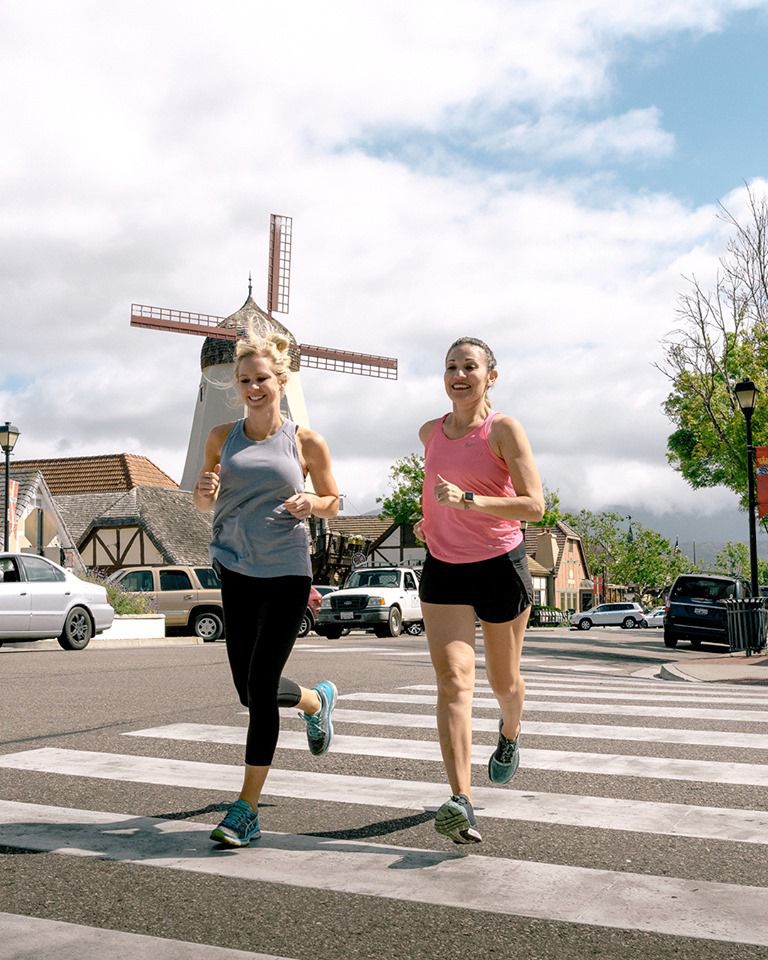 On the tail of what some describe as a successful fourth quarter, including a closeout 2019 Julefest celebration which brought droves of new visitors to town, Solvang is experiencing a slower than usual start to the new year, according to some merchants, who believe tariffs and the coronavirus outbreak may be hurting their bottom line.

While a marked tourism slow-down between January and March is a historical norm, some are saying a 10% tariff imposed by President Trump on Chinese imports last year, coupled with the coronavirus outbreak in China in late December are also impacting the local economy.

According to the tourism website Visit California, China remains California’s top overseas market with three flight entry points in Los Angeles, San Francisco, and San Jose. In Solvang, the most recent annual visitor count available — for the year 2012 — was 1.5 million. Of that number, 200,000 visitors were tied to the Asian market, largely China.

Melissa Deleon, account manager for Solvang boutique hotel and restaurant The Landsby, says they have experienced a noticeable decrease in tourism since mid-January, specifically from the Asian market which she believes is related to the recent global health crisis.

State of the City

The 2020 Solvang State of the City will be held at 10:30-11:30 a.m. on Friday, Feb. 28, at the Solvang Veterans Memorial Hall, 1745 Mission Drive. Mayor Toussaint will address City accomplishments and introduce upcoming City initiatives, followed by guest speakers. The meeting is open to the public and free to attend.

Afterwards, a ticketed State of the City will be held at Solvang’s Hotel Corque, 400 Alisal Road, from 12:30-2:30 p.m. Tickets for the afternoon luncheon event are $35 each and currently on sale at eventbrite.com/e/state-of-the-city-luncheon-tickets-93149922927?aff=city . Tickets include lunch. Advance reservations are required.

"We know trends and note trends," Deleon explained. "We knew when [the coronavirus outbreak] was announced – we thought 'Oh gosh, that's really going to affect us.' During a slow time of year, we look for that business. Seasonally, these are slow months and so we have definitely noticed the impact."

"We've looked at the numbers and they've been lower compared to other years at this time," said West, adding that she is optimistic the "drier season" will soon pass.

David Rasmussen, owner and operator of Rasmussen's Solvang, purveyors of Scandinavian wares since 1946, said he has seen a slight drop in valued Chinese tourism over the last year. But he doesn't believe news of the coronavirus is purely to blame for a slow first quarter.

"There are too many variables involved to pin it down to one thing," he said, pointing to U.S. tariffs on China and weather as examples.

Scott Shuemake, president of IDK Events LLC, City of Solvang Marketing and Tourism Managers and producers of last year's Solvang Julefest, explained that January through March is historically slow for all markets, including Solvang.

"This is principally why 'Taste of' events or 'Restaurant Week' events are popular during Q1," said Shuemake. "It has been reported publicly prior to our involvement with the city that most Chinese tourists come from L.A. Additionally, as China cracks down on outflows of capital, one could expect a decrease in foreign tourism for the country as a whole as it's harder and harder for the average Chinese family to convert sufficient quantities of RMB to USD."

Travel guide company Get Your Guide, which offers transport services to large metropolitan cities around the world, runs groups of people to popular destination spots like Santa Barbara and Solvang. Buses which typically cater to European clientele during high-season, which begins in March, depart from Los Angeles.

A customer service representative for the company said that tours have not been affected by the coronavirus outbreak, and that buses are running as  usual. They will continue to offer their Santa Barbara and Santa Ynez Valley Wine Tour to the public without interruption – "as long as you are healthy," the representative added.

The Solvang City Council voted 5-0 to extend its event planning and marketing contract to IDK Events, the San Francisco based company which took Julefest by the horns at the eleventh hour in 2019. The $300,000 contract would cover services through the remainder of the fiscal year. The contract also includes an option for the city to extend the contract through the next fiscal year at a rate of $600,000.

Elizabeth Birkholm of Birkholm's Bakery in Solvang, said that although this time of year is usually slower they too have experienced a slower pace since December, specifically with Asian clientele.

"I'm not so sure it's because of the coronavirus as much as it is the tariffs," said Birkholm. "I talked to my tour guides about it and they said it's more the tariffs than the virus, since most of their tours are still booked out. If the coronavirus has affected business, we'll know more at the end of March."

The City of Solvang will present two separate 2020 Solvang State of the City meetings on Friday, Feb. 28, themed “Spirit of Solvang, History and Vision”.

Not only does this evening serve as an excellent opportunity for these young men to build both their culinary and social skills, but it also serves as an opportunity for members to make an important impression upon them.

Although there have been no reported cases of COVID-19 — commonly referred to as coronavirus — in Santa Barbara County, Lompoc Valley Medical Center officials have begun making preparations to assess and respond to the growing health crisis.

Max and his wife Laura Hanberg own the Solvang Shoe Store, in Solvang.

A temporary chalk stencil in Mandarin Chinese issues a traditional Chinese New Year greeting on a Solvang sidewalk in 2018.