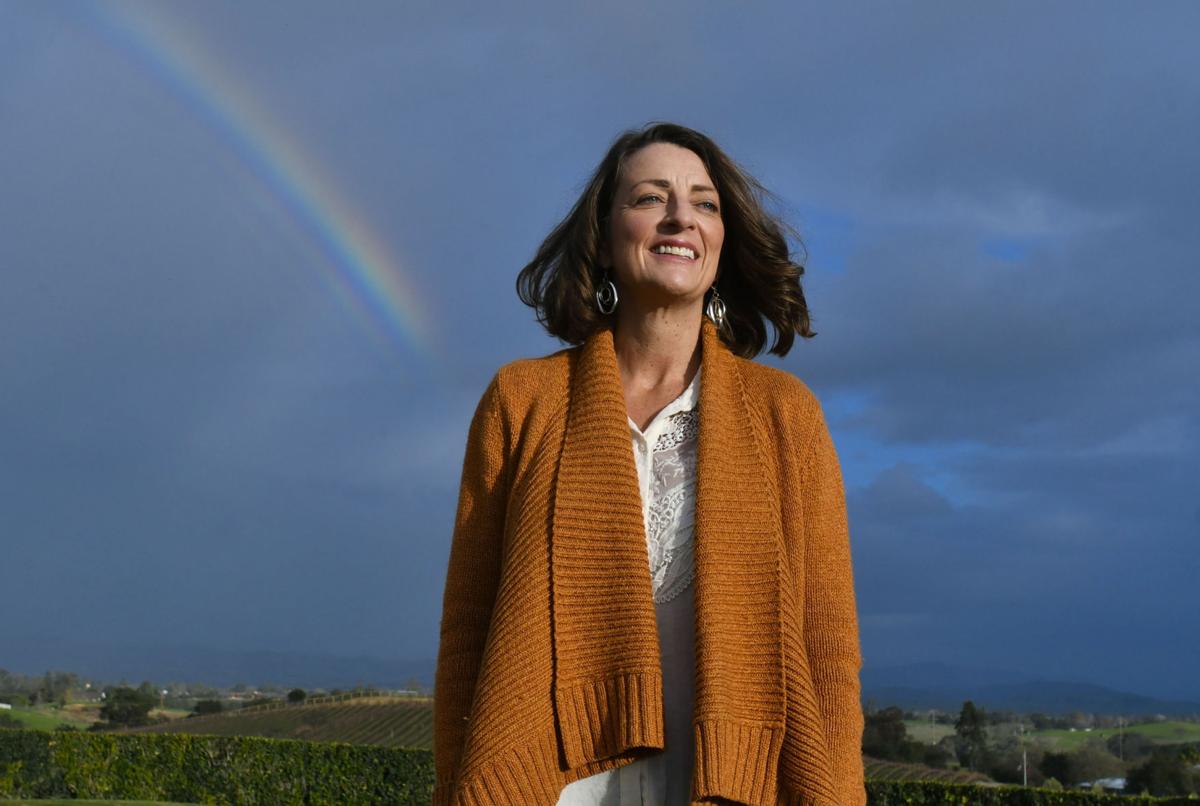 Norma Hinkens, shown at her Santa Ynez Valley home, is a successful science fiction writer. "Girl of Fire," the first book in her latest trilogy, was released Jan. 10. 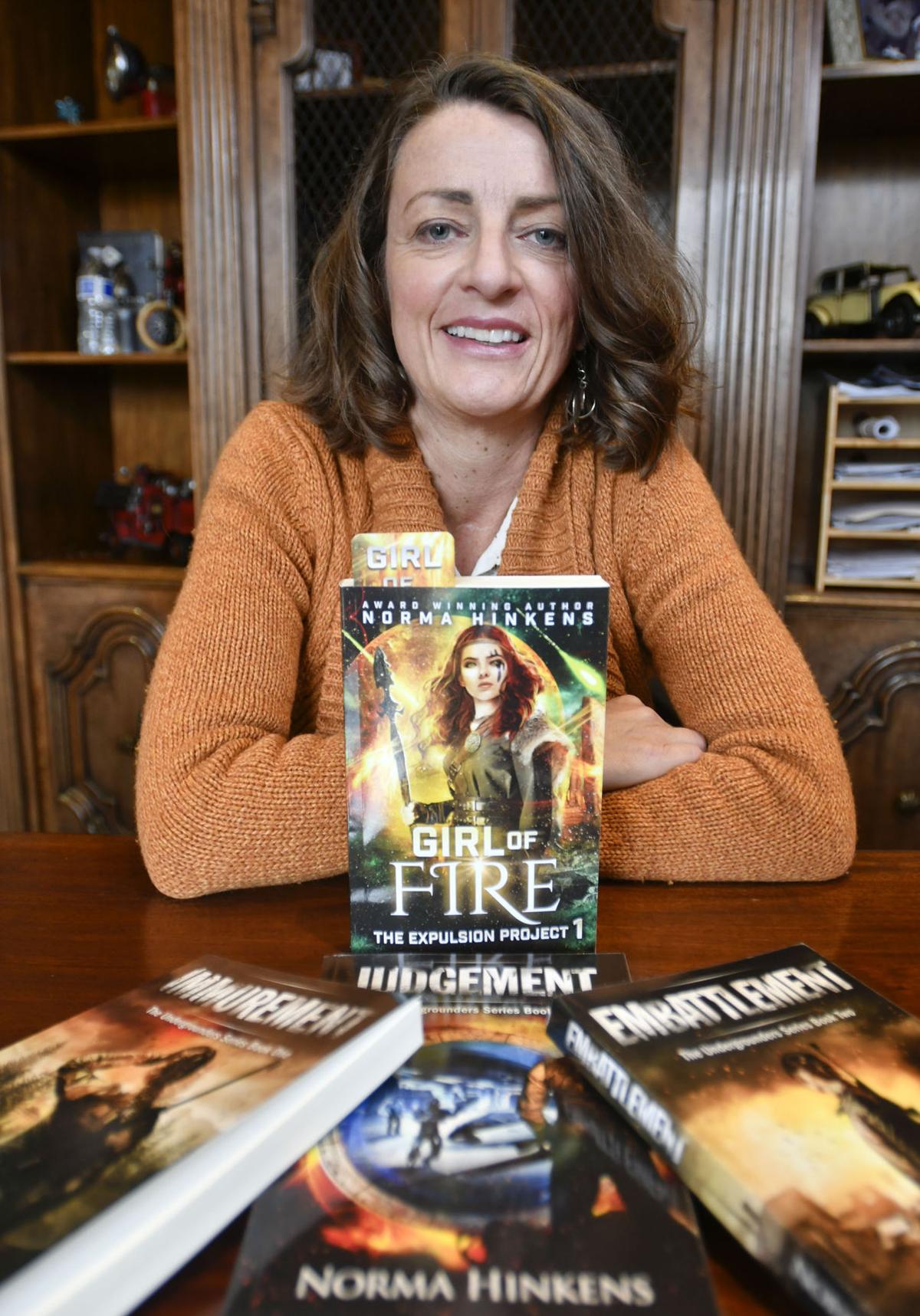 Norma Hinkens is a successful young adult science fiction writer. "Girl of Fire," the first book in her latest trilogy, was released Jan. 10. 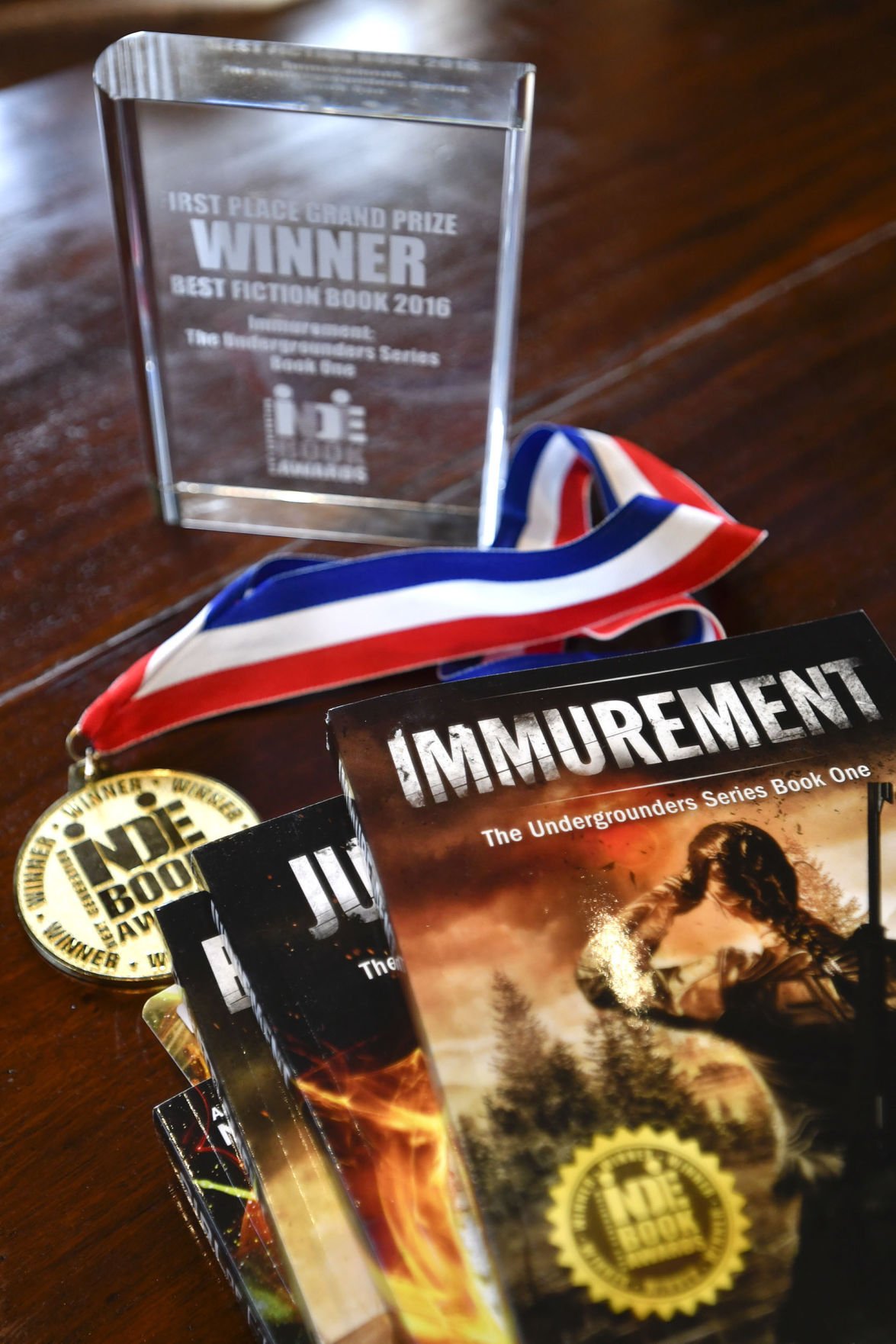 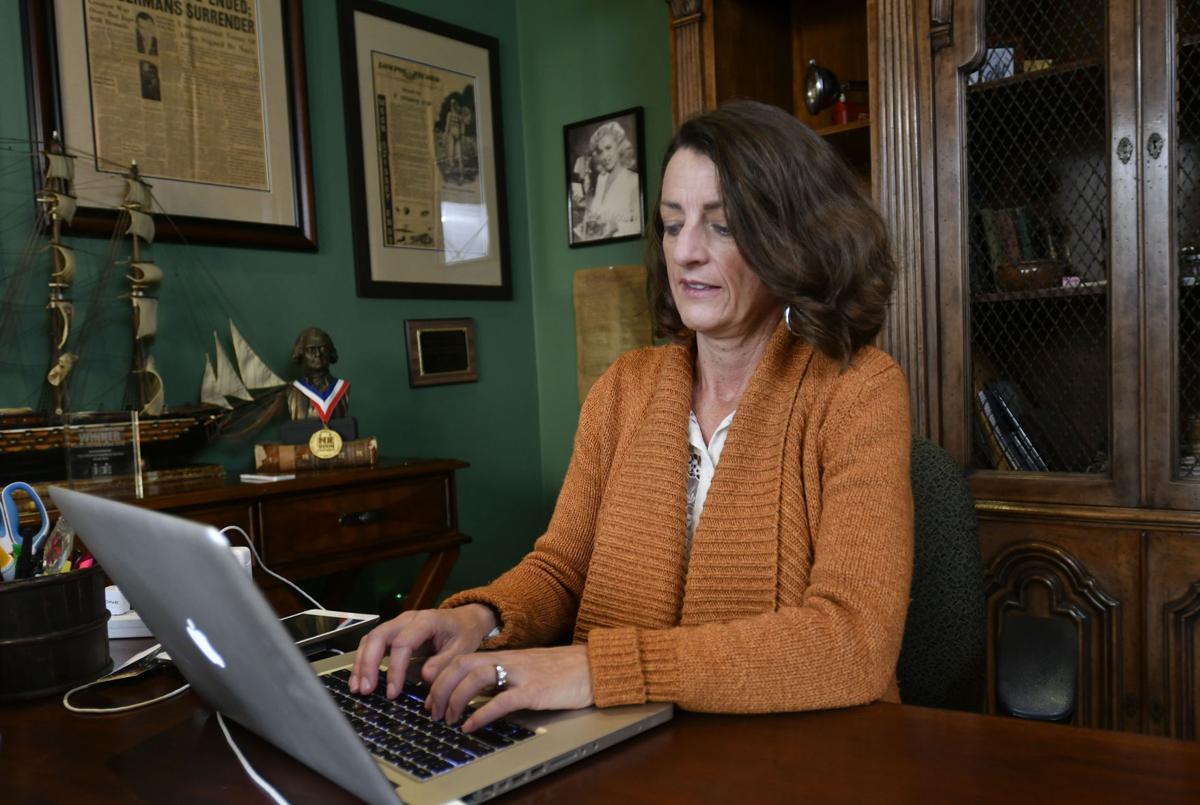 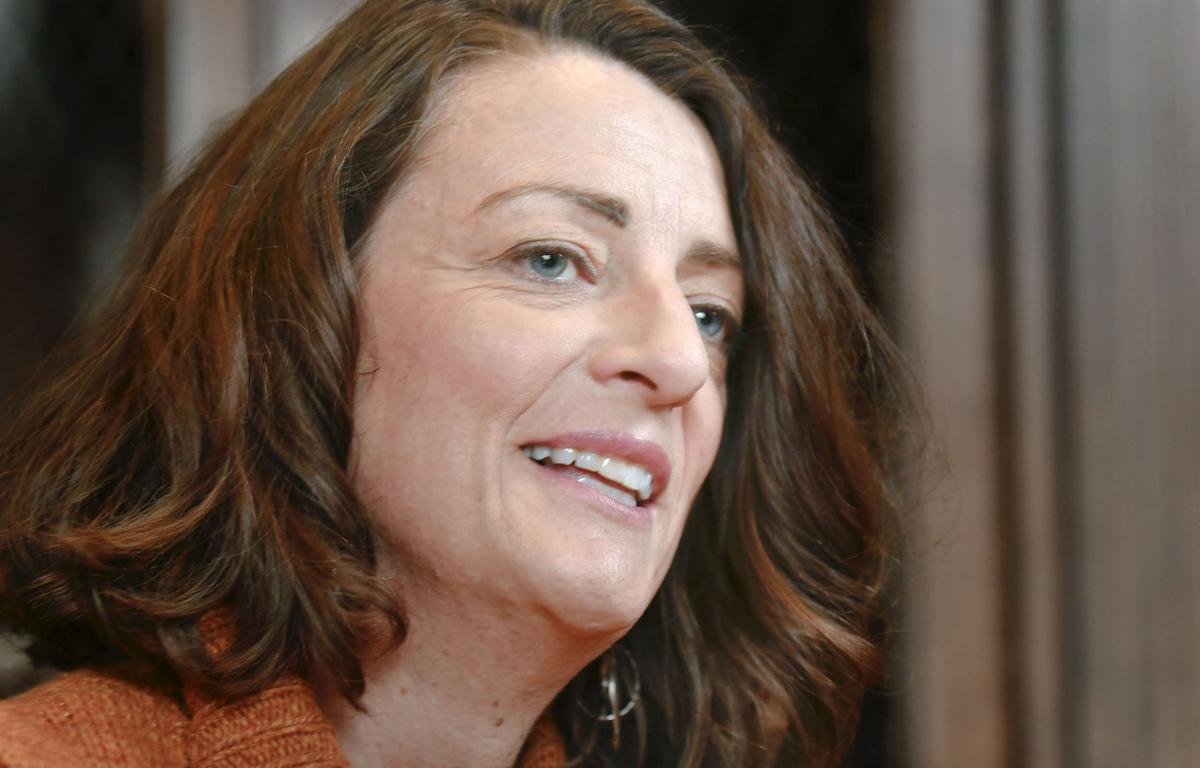 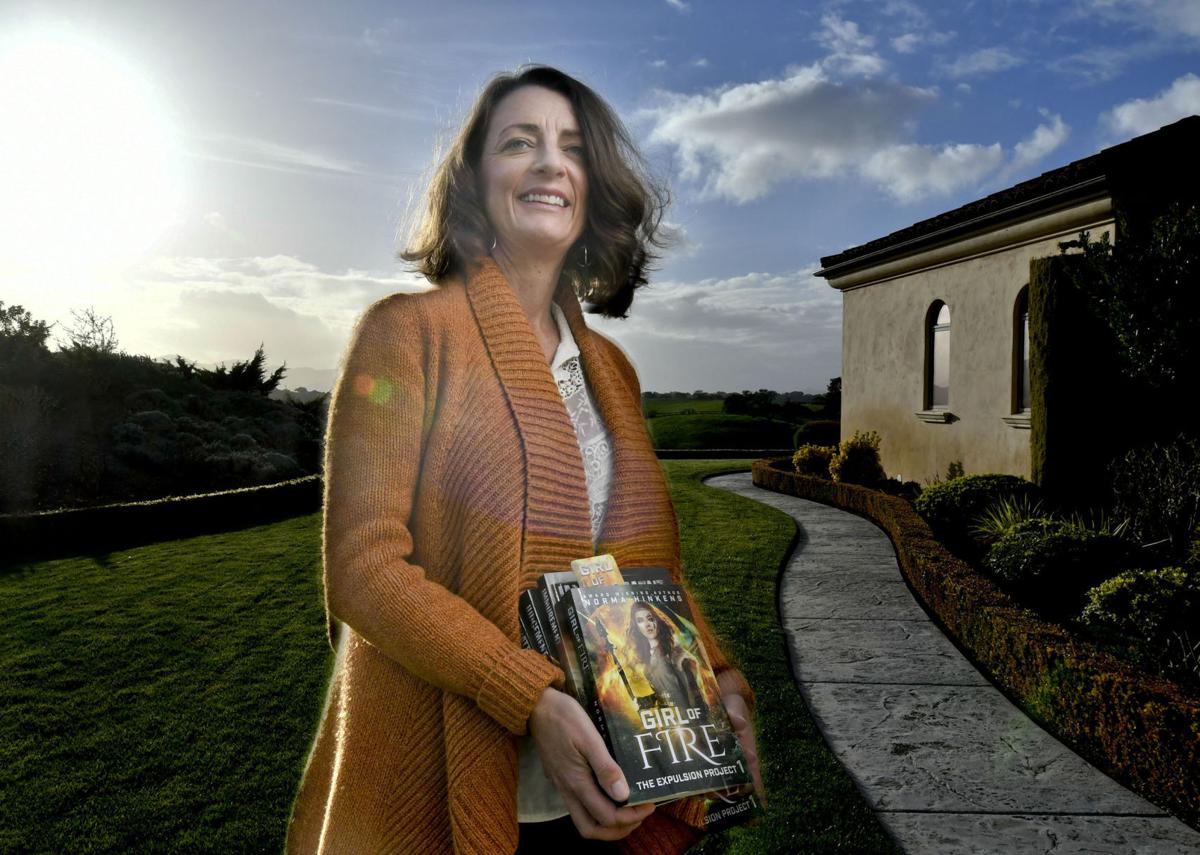 Norma Hinkens, photographed outside her Solvang home, is working on her second sci-fi dystopian thriller trilogy.

With piercing green eyes and flowing red hair, a young woman stares out from the cover of "Girl of Fire." Her spear is at the ready. Trattora is our heroine's name. Born on a primitive frontier planet, she finds herself in a race against time to save that very planet from destruction by the galactic underworld.

That's the storyline of "Girl of Fire," the first book in a new trilogy, The Expulsion Project, by Solvang author Norma Hinkens. It was released Jan. 10.

At first glance, Hinkens seems an unlikely candidate to be the author of young adult post-apocalyptic dystopian thrillers but that's exactly the genre she specializes in.

"Any of the big young adult movie hits of the last few years like 'The Hunger Games' and 'Divergent,' they fall into that dystopian thing. The regime has fallen, somebody horrific has taken over, and the young people have to save the day," she explained. "It's definitely a hot genre."

Hinkens considers herself a natural storyteller. She was born and raised in County Donegal in Ireland, the land of storytelling.

"Every pub on the corner has its own resident storyteller," she recalled. "My grandparents and uncles were good storytellers. I think I absorbed a lot of that without realizing it."

After college, her first job took her to Germany, and then with the same company, to Michigan. That's where she met Joe Hinkens. The two later married and moved to California where he owned property and had a business, Mainline Auto Body, in Santa Maria. Eleven years ago they built their current home, on 27 acres atop a hill with breathtaking views.

With three children to raise, it has only been in the last few years that Hinkens has had the time to settle in and put on paper the voices she had in her head about heroes emerging from terrible situations to overthrow terrible regimes.

It's those sort of stories that have always fascinated her, Hinkens said.

"I was the kid who was reading concentration escape stories when other kids were reading fairy tales," she laughed.

Hinkens candidly acknowledged that making her heroes female is a marketing decision because most most readers in the young adult category are women. They are, however, women of all ages. With the world being so fast-paced and everything coming at us in sound bites, women looking for an easy read at the end of a long day gravitate to these young adult books, she opined.

It's what Hinkens, herself, now reads.

"I try to read a lot of contemporary young adult books. I read Cassandra Clare and authors like that. You have to keep your finger on the pulse of the market. It changes quickly, especially with young adults."

Hinkens' first trilogy, The Undergrounders Series, quickly established her as a force to be reckoned with in the world of young adult science fiction dystopian thrillers. Her heroes had been living in bunkers until they formed an alliance and successfully overthrew an evil regime.

At her admirable writing pace of 10,000 words a week, the three books were published in less than a year, starting in December 2015.

The trilogy won Hinkens thousands of fans, rave reviews and two awards plus $1,500 from the Next Generation Indie Book Awards.

She anticipates it will take her all of 2017 to get the three The Expulsion Project books into the marketplace.

As an independent publisher (the preferred term for what used to be referred to as self-publishing), Hinkens handles all the business of publishing from her Solvang desk.

She conceptualizes her covers and then works with a professional designer on the final product. The books are printed at a facility in Southern California and shipped to Amazon -- at the moment, her sole retailer. Thanks to the fans she made with the first trilogy, Hinkens said she has an extensive email list of Advance Review Readers who agreed to read "Girl of Fire." The unanimously positive reviews led to 300 prepublication orders.

She also does all her own marketing, public relations, advertising and social media.

"The back end is what's really time consuming when you're doing it all yourself," she said. "It's tough. I don't have time to think past the next day. Right now I'm paddling for my life. I've had to learn a lot of graphics for the promo ads. I have to be able to do things on the fly."

But it's the story that comes first. When starting a trilogy, Hinkens knows where it needed to go and what the end would be.

For The Expulsion Project, for instance, she decided to set the story in outer space.

"I thought it would be fun to have a whole new environment. I have all these planets. I could completely make up the technology and the society. It was fun. I really had a blast writing it."

She did not decide in advance all the twists and turns her characters, especially her heroine, Trattora, would take, however.

"If I did, I would be less incentified to get there because I like going on the journey, too. There has to be some discovery in the process for me."

'S is for Solvang': Local author teaches the ABCs of Little Denmark

Drawing from Danish words, local architecture and photography, S is for Solvang also includes fun facts and lively storytelling that are useful not only to children.

Beverly Cleary, the celebrated children’s author whose memories of her Oregon childhood were shared with millions through the likes of Ramona and Beezus Quimby and Henry Huggins, has died. She was 104.

Norma Hinkens, shown at her Santa Ynez Valley home, is a successful science fiction writer. "Girl of Fire," the first book in her latest trilogy, was released Jan. 10.

Norma Hinkens is a successful young adult science fiction writer. "Girl of Fire," the first book in her latest trilogy, was released Jan. 10.

Norma Hinkens, photographed outside her Solvang home, is working on her second sci-fi dystopian thriller trilogy.