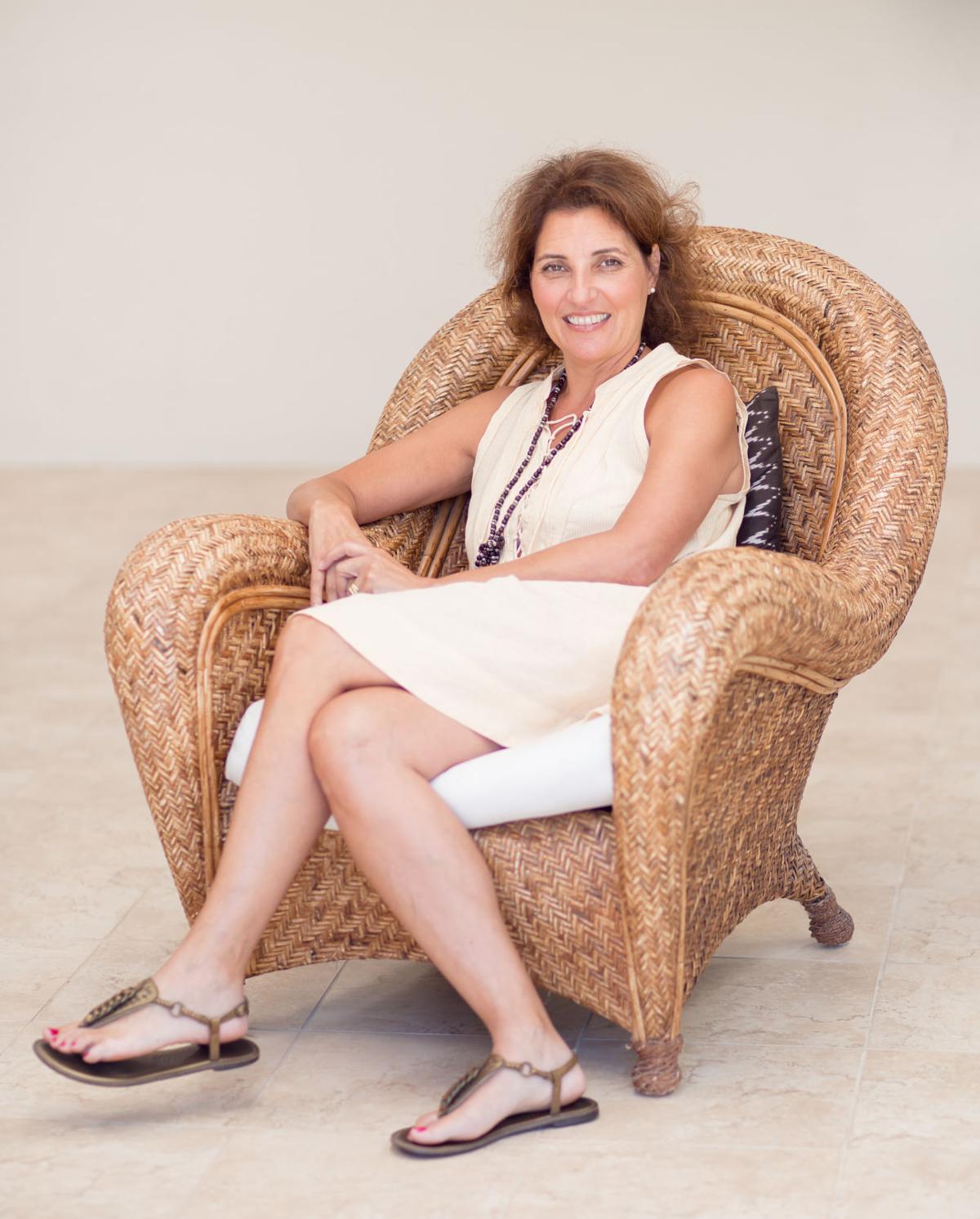 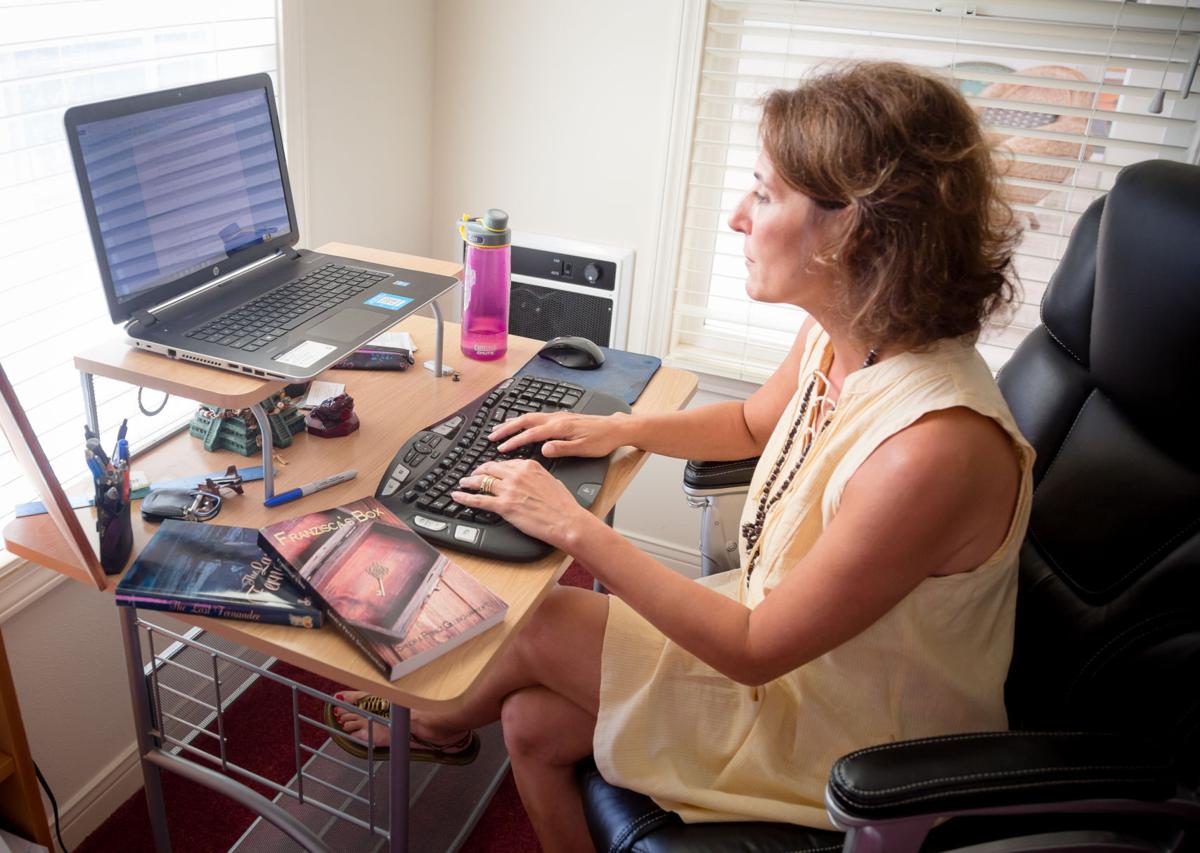 Sandra Perez-Gluschankoff, shown working at her Solvang home, is a novelist who has just had her second book published. She is also the co-writer and co-producer of a new cable TV series, "Life. Matters with Dr. Michelle Gordon." 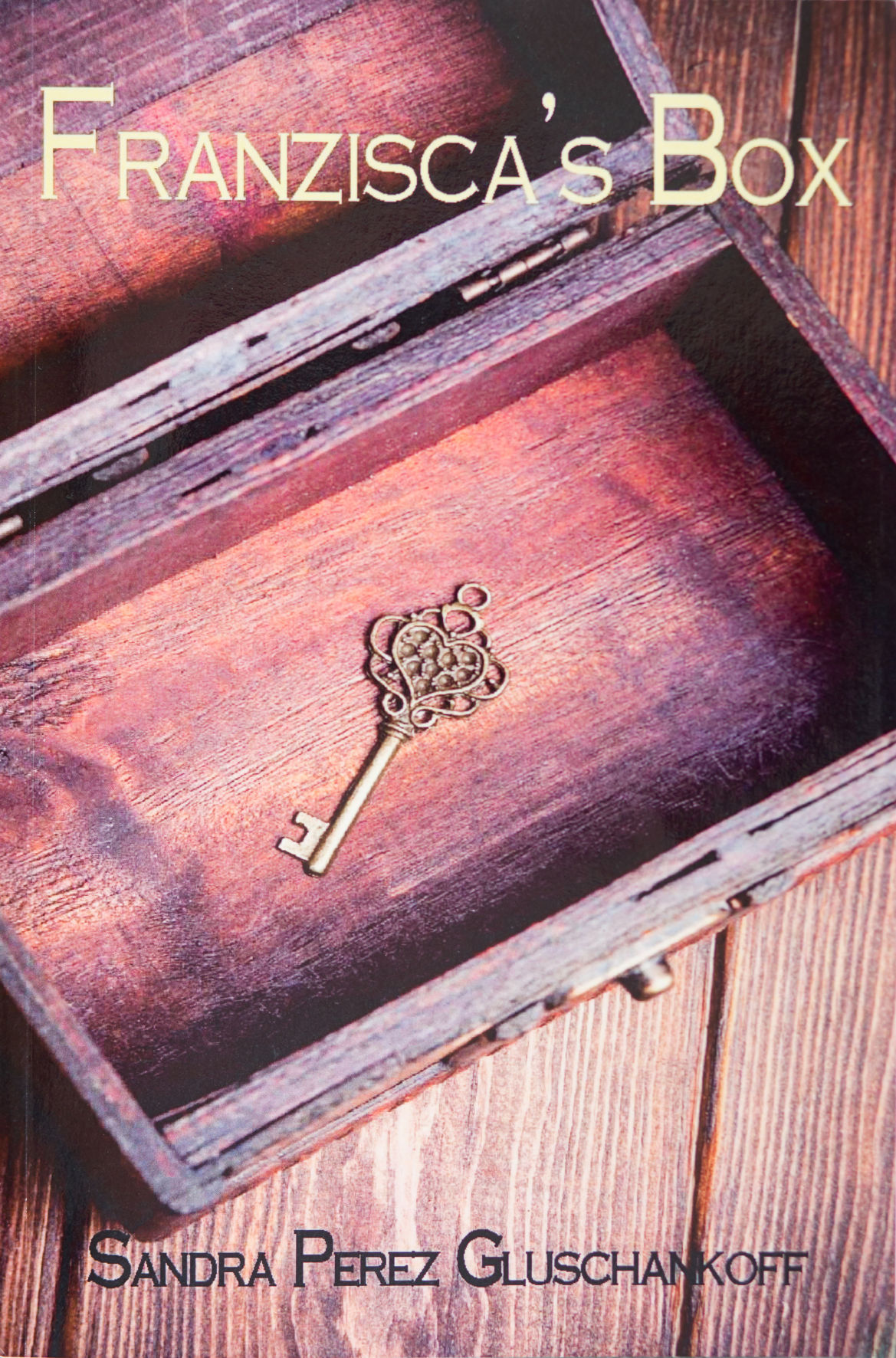 For 22 years before she moved to Solvang in June, Sandra Perez Gluschankoff had been visiting America's Danish capital, and falling in love with everything from its vistas to its windmills. The imprint was such that when she wrote her second novel, "Franzisca's Box," she set the opening scene in Solvang.

"There are two characters in the kitchen. They are looking out the window and into the hills," she said. "The day we came to see this house, I looked out that window," she said pointing to her own large kitchen window, "and I said, 'This can not be'. It was exactly what I had in my head when I wrote that passage."

"Franzisca's Box" is fact-based fiction with numerous elements of the seven-generation story coming from Gluschankoff's own family history.

"I mix present time with historical times," the Argentinian-born author explained. "It starts here, goes to Poland in the early 1900s, to South America, and then back to the U.S. There is Jewish historical fiction and background, and lots of drama." Included is World War II in Romania and the post-war immigration of Nazi criminals into Argentina.

"I grew up in a family of immigrants," she said. "My grandparents on my mother's side spent World War II in Romania. Once the war was over and the Red Army came in, they escaped Romania and fled to an American refugee camp in Italy where my mom was born. The Americans offered for them to come to the U.S. but they'd heard so many wonderful things about Argentina -- how you could find gold on the streets that's where they went, only to find after they got there that the gold was what the criminal Nazis had stolen from the Jews."

Sandra Perez had a far less dramatic reason for leaving Argentina, the country of her birth. In her 20s, she met her husband-to-be, Sergio Gluschankoff, through a mutual friend during a trip to the U.S.

"Apparently, I am unforgettable because six months later he came knocking on my door and asked if we could go out that weekend," she laughed. After another six months of a long-distance commuter romance, she relocated to the U.S., and a year later they married. They are the parents of two sons: One is a UCSB student and the other is going into his third year at Georgetown Law at Georgetown University.

Gluschankoff admittedly had to reinvent herself when she came to the U.S., speaking no English and a few months shy of her university degree.

She became an English-Spanish interpreter for medical and legal offices. She taught Hebrew at a Jewish day school in San Diego where the Gluschankoffs lived for 14 years. Then one day, she said, she woke up knowing she wanted to write, specifically, screenplays.

"I bought every book on screenwriting I could find," she said. She completed a dozen of them. Several finished well (although none won) in various screenwriting competitions. One was optioned for a movie but never produced. She worked as the script supervisor on a small film shot in Santa Barbara.

That led her into a reality series now airing on the FYI channel, "Life. Matters with Dr. Michelle Gordon." Gluschankoff co-wrote and co-produced the 13 episodes of the first season, and appears in several of them.

The show follows Gordon and her friends as they ride through the hills of Mallorca, Spain, and discover Spanish cuisine and immerse themselves in Spanish culture and the arts, while discussing the health and lifestyle issues that women face in aging.

"Life.Matters" premiered earlier this month and has already been renewed for a second season. It is seen locally on DirecTV, Dish and Comcast.

Gluschankoff is also kept busy doing the administrative work for Synergy Organic Farms, a company she owns with her husband. They farm 212 acres along Highway 246 between Buellton and Lompoc.

Her next book is a stand-alone short story, "Wednesdays with Maria." It will be published as an e-book in September and is the prequel to her next novel.

The Gluschankoff home in Solvang still has a bit of that "we've just moved in" look, unpacked but with empty spaces here and there and walls awaiting artwork. The couple is still in the process of figuring that out, and in no rush. After moves from San Diego to Calabasas to Santa Barbara and now the Santa Ynez Valley, they're planning on staying put for a long time.

"We'd come to Solvang on weekends and I remember thinking how really nice it would be to live here. Now that we're here, I love it. There is a certain vibe to the place, a certain energy. I love walking down Alisal, down to where it becomes a narrow winding road. I love seeing people taking pictures of windmills and the horses pulling the carriage. It makes me smile."

Writers are invited to create a mysterious or scary story related to the supernatural, in 500 words or less.

Attendees will witness Blatch at the time of the final state vote on the 19th Amendment in August of 1920.

Sandra Perez-Gluschankoff, shown working at her Solvang home, is a novelist who has just had her second book published. She is also the co-writer and co-producer of a new cable TV series, "Life. Matters with Dr. Michelle Gordon."