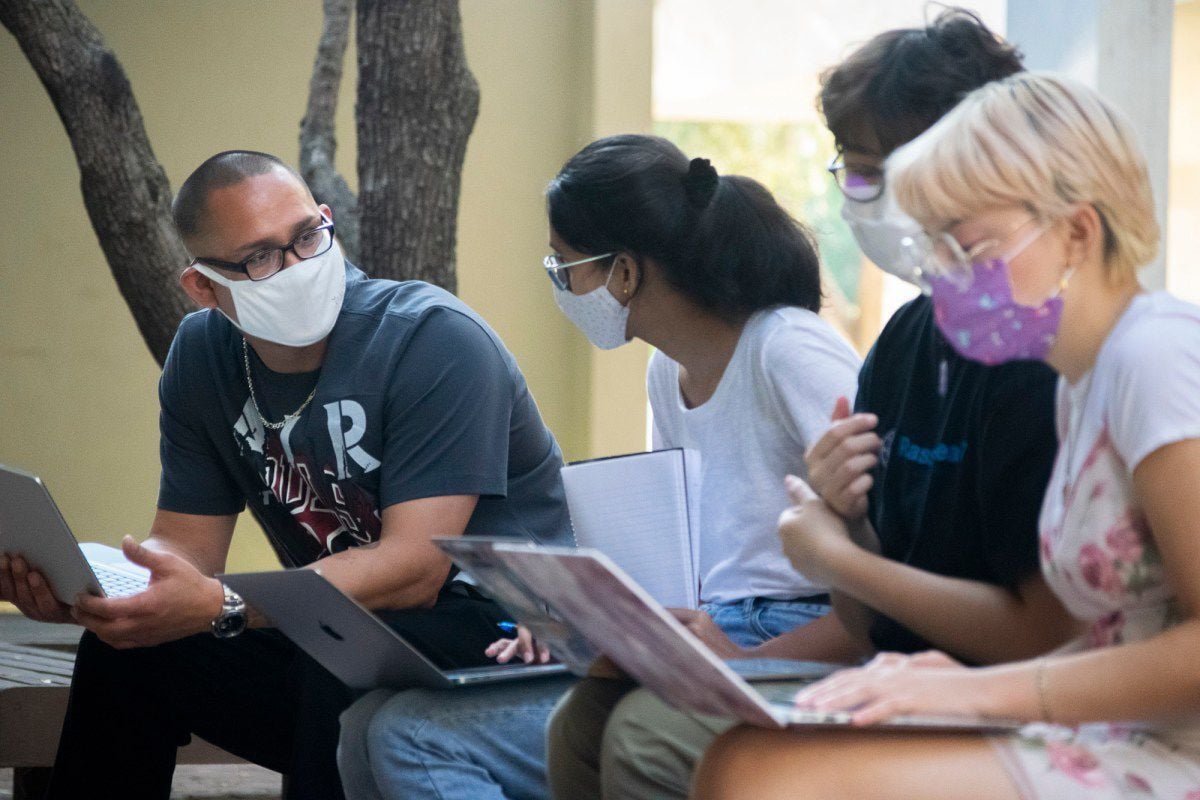 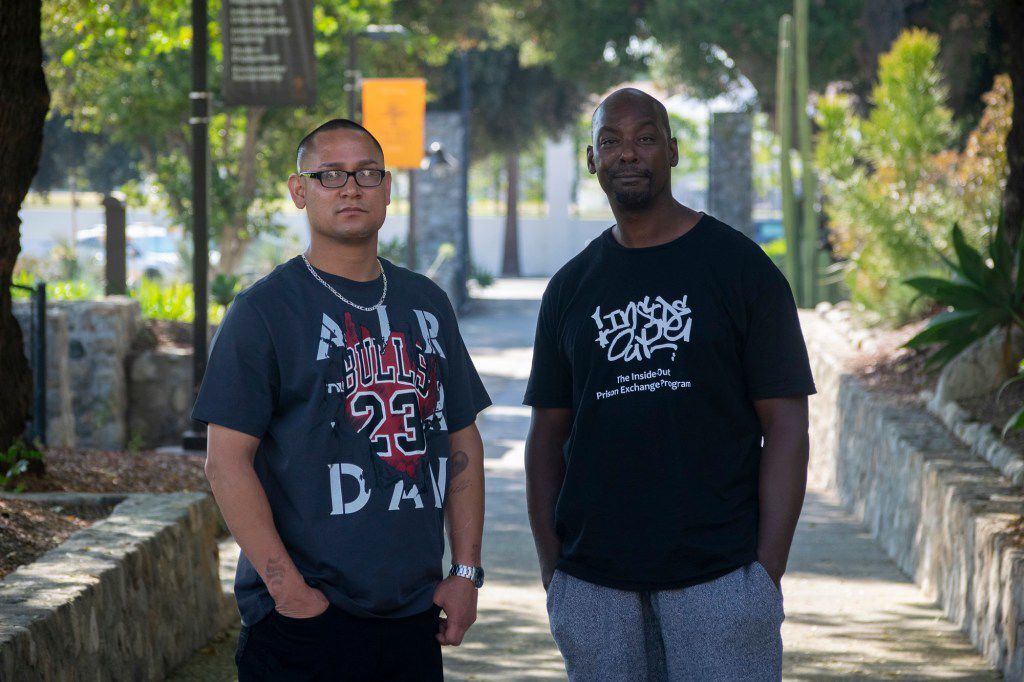 Fifteen years ago, Kenny Butler was at a low point. He had just been sentenced to life in prison.

Now Butler, 47, is on track to earn his bachelor’s degree through a new program at Pitzer College, a small private liberal arts school in Southern California.

The program, which began last December and which the school says is the first of its kind in the nation, is based on Inside Out curriculum — a type of teaching that brings college students and professors into prisons to learn alongside incarcerated students. Pitzer, a selective school that accepts fewer than 20% of applicants, started the Inside Out program with the goal of helping incarcerated students better engage with coursework and make connections with the outside world — a key factor in reintegrating back into society.

Research shows that prison bachelor’s degree programs reduce recidivism rates and help incarcerated people find better-paying jobs after being released. The Pitzer program comes at a time when California is ramping up its prison education efforts.

“It’s meant the world to me,” said Butler, who like the other students was convicted of a felony and who was released on parole in June.

In prison, “they have us boxed into a certain environment with certain people and lots of guards who are always standing around,” he said. “That’s not healthy for the mind.”

But college, he said, gave him a way to express himself.

“You know, sitting in a classroom environment and not being in any type of threatening environment with them standing over us, and just being able to talk. That’s something I’ve never had.”

Butler is one of eight students from the California Rehabilitation Center, a men’s prison in Riverside County, in the Pitzer program’s first graduating class. All are expected to graduate with bachelor’s degrees in organizational studies by December. Butler and another student who was released from prison in March, Daniel Duron, are finishing their degrees on Pitzer’s campus while living together in a nearby apartment. Another incarcerated classmate completed his degree early and was released from prison in mid-September.

Because the program started in the middle of a pandemic, it debuted via Zoom. But this semester, students and professors are heading back to the prison for in-person classes. The incarcerated men in the program have been convicted of felonies ranging from robbery to domestic violence and manslaughter. To be eligible, they must have already earned associate’s degrees.

The Inside Out approach has been widely used across the country for decades, but Pitzer’s program is the first to offer incarcerated students a bachelor’s degree instead of just standalone classes, said Nigel Boyle, the program director.

As many as 55,000 incarcerated students in California are enrolled in some type of educational program at any given time, said Shannon Swain, superintendent for correctional education at the California Department of Corrections and Rehabilitation. The majority of those students take correspondence classes, submitting assignments via mail and completing them at their own pace.

Other California universities are also beginning to offer bachelor’s degree programs for incarcerated students: California State University at Los Angeles launched the state’s first in 2016, and the University of California at Irvine plans to follow suit in 2022.

But those programs aren’t based on the Inside Out model. While professors may go into prisons to work in person with incarcerated students, other students from the campuses aren’t in the classes alongside them, as they are in the Pitzer program — at least for now.

Just the exposure to outside students and professors can provide a “new experience of the educational process” for incarcerated students who often have a troubled history with the education system, said Lori Pompa, a criminal justice professor at Temple University in Philadelphia, who taught the first Inside Out course in the country in 1997.

If not for the Pitzer classes, “I don’t think I would ever be in a situation where I would speak to a 20-year-old white girl who grew up rich and actually have dialogue on a specific topic,” said Duron.

“She had been willing to engage, learn and understand,” he added. “Both of us know that we’re not very different from one another. We have more in common than we don’t.”

The program is funded by grants and tuition revenue (Pitzer comes with a $50,000-plus price tag for the majority of students). Incarcerated students don’t have to pay a dime, and the school pays the professors. It’s money well spent, Boyle said, because it’s not just the incarcerated students who benefit from the program; the “outside” students do, too.

Katherine Almendarez, a senior at Claremont McKenna College — whose students can take classes at Pitzer because the two schools are part of the seven-college Claremont Consortium — enrolled in an Inside Out class called “Feminism for Men” this past spring.

Every Tuesday at 12 p.m., she signed onto Zoom and 30 miles away, her classmates in prison would log on collectively, sharing a computer. Together, they went over readings, discussed concepts and worked together in breakout rooms.

“Everyone is really, really active and engaged at all times,” Almendarez said in March while she was taking the class. “I’m amazed and impressed by the students inside … Their life experiences really contribute a lot to our class.”

Because they’re older and didn’t go straight to college after high school like she and many of her peers did, Almendarez said, they have more real-world experience that informs their contributions in class.

“A lot of the time, we would probably gain those lessons in years … whereas they already have that and it’s something that they can share with us,” Almendarez said.

Another aspect of the classes she appreciates? The “inside” students’ honesty.

While she and her “outside” peers will often just agree with what other people say in class, the incarcerated students, “they’re just straight up honest, like, ‘This is the way I think about it. If y’all are telling me we shouldn’t, I’m going to accept that and work on that,’ ” she said.

“This is the only class in which the three hours go flying by because of how engaging it is,” she added.

The program also offers its incarcerated students academic advisers, access to tutors and a writing center inside the prison, and help in finding a job after graduation.

Those resources have been transformative for formerly incarcerated students like Duron. Before he enrolled in the program, he said, he had planned to get a job at a warehouse after he got out of prison, since some don’t do background checks and all he had before prison was a high school diploma.

“‘I’ve always been smart and always wanted to go to school but never had the opportunity,” Duron, 40, said. “The money wasn’t there and the guidance wasn’t there.”

But now, he said, with a bachelor’s degree soon to be on his resume and access to campus resources from Pitzer, he’s raised his ambitions. Duron is currently applying for a Fulbright fellowship in Ireland and looking into master’s degree programs. He said he wants to get involved with nonprofits that focus on re-entry or maybe get into legislative advocacy work.

He said he still might face some obstacles due to having a felony on his record, but the degree will help.

The challenge of scaling up

One challenge for Inside Out programs is scale. Class sizes in the Pitzer program are capped at 12 incarcerated students and 12 outside students — close to the standard class size for all Pitzer’s discussion courses.

Boyle, the Pitzer program’s director, acknowledged that the college only has so many resources and therefore has had to keep the program small. But he said Pitzer is working on a partnership with California State University San Bernardino to expand how many students it can serve.

Currently, the program is selective with more students wanting to join than available seats. Some prerequisites, like an associate’s degree, help thin out the pool of potential applicants.

Around the country, at least 20 states now teach Inside Out classes, but funding is often a problem, with volunteer professors taking on the courses in addition to their normal workload.

Swain of the California corrections department points to research that shows that education is the most cost effective way to reduce recidivism — the rate at which people return to prison.

A 2013 study from the RAND Corporation found that participants in correctional education programs had 43% lower odds of going back to prison and a better chance of getting a job post-incarceration. And the higher the level of education, the lower the recidivism, with only 5.6% of incarcerated people who earn bachelor’s degrees going back to prison.

Offering bachelor’s degrees also combats another common challenge in correctional education: Many prison classes don’t lead to higher-level credentials that would be most beneficial to students after they are released.

Many incarcerated students have started asking for bachelor’s degree programs, Swain said. They’ve accumulated six or seven associate’s degrees and want to know what’s next. “They want to keep going,” Swain said, “and they need to be able to set and achieve goals.”

At the California Rehabilitation Center in Norco where the Pitzer program now takes place, student Damian Busby had earned six associate’s degrees and was itching to get to the next level of his academic career. He was “elated” to learn about the Pitzer program.

“I had been running in place (taking community college courses) for so long it felt like I was in that movie Groundhog Day. I could finally advance my formal education to a higher level,” he told CalMatters in a statement.

Busby is set to graduate in December and scheduled to be released on parole in 2027. He hopes he might be able to get out early under a California law that allows people convicted of nonviolent offenses to shave time off their sentences when they earn credits for good behavior and educational achievement.

After prison, he said, he wants to work as either a physicist, mathematician or economist and start his own nonprofit organization to address social problems such as homelessness.

“I think that people need to know the value of education in prison,” Busby said. “As educated persons, we can parole out into the world, and instead of getting in trouble, we will become productive, tax-paying citizens. We will build stable relationships and families, and will give back to society.”

This story was originally published by CalMatters.