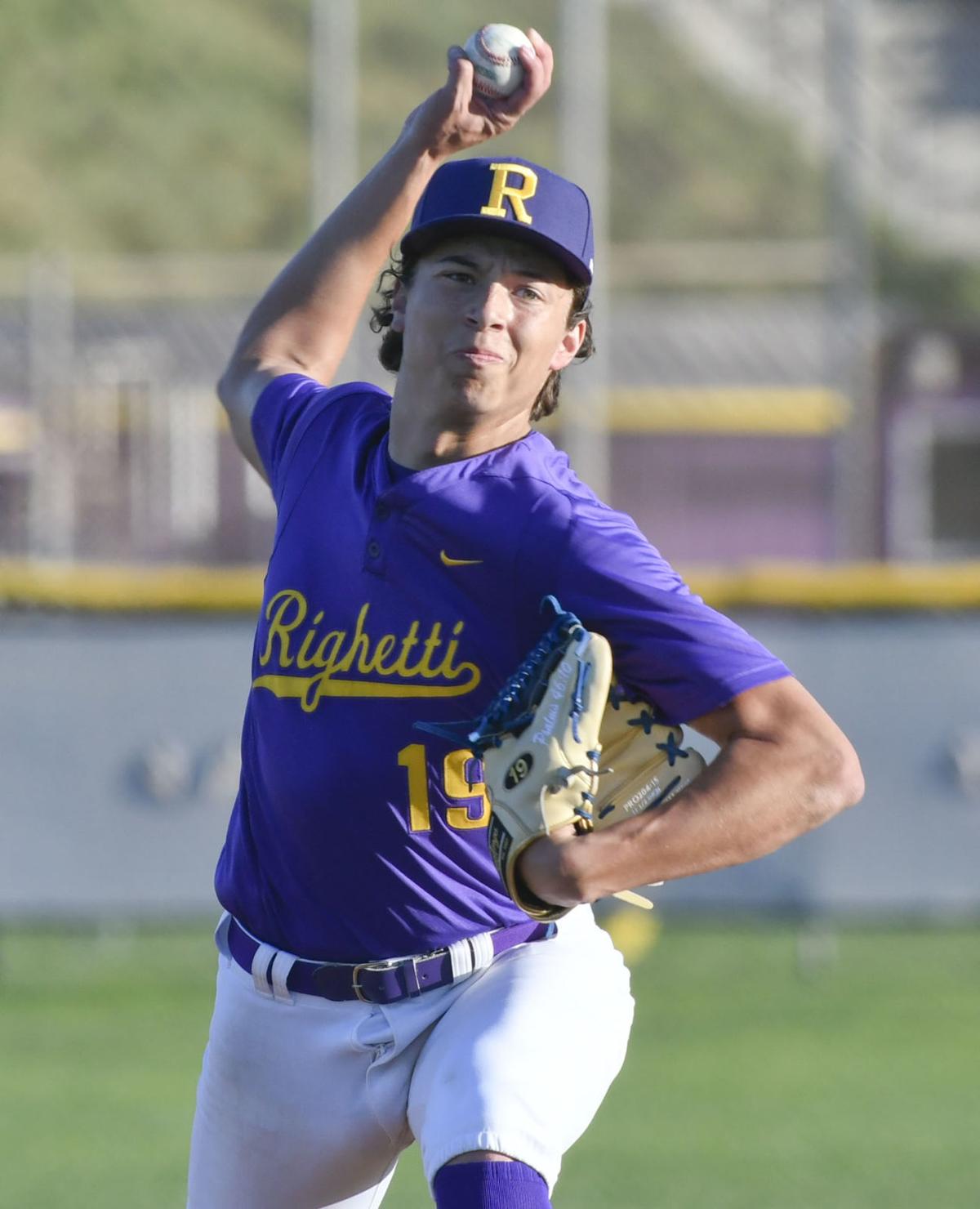 Righetti's Ryan Delgado pitches against Nipomo at the Warriors' field during a game last February. 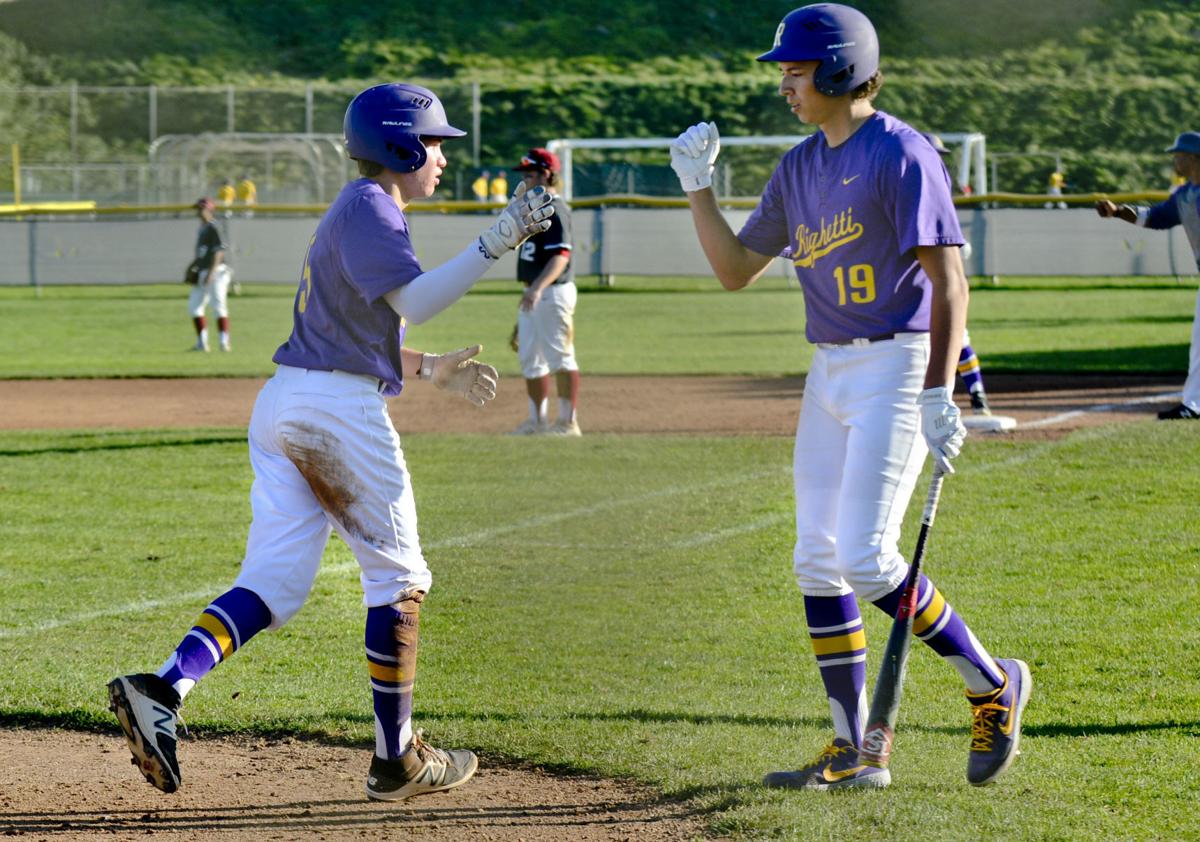 Righetti's Gavin Long, left, high-fives Ryan Delgado after he scored against Nipomo at the Warriors' field in February. Delgado suffered an elbow injury before the high school baseball season was eventually canceled due to the coronavirus pandemic. Delgado will pitch for Cal Baptist after graduating from Righetti High.

After a fruitful pitching career at Righetti High School, Ryan Delgado will pitch at the NCAA Division I level.

"I went on a visit there last August," well before the COVID-19 pandemic hit, forcing the closing of schools nationwide in March, said Delgado.

Pioneer Valley softball coach Kristina Sewell saw to it that her seven seniors got some recognition.

Wednesday night, she gave each of the seven their own drive through parade at each of their homes. The seven seniors on the Pioneer Valley softball squad are Leticia Perez, Serenity O'Nan, Monique Gomez, Lisette Guzman, Breanna Galaites, Gizelle Melero and Amanda Casares.

"I was back in touch with Cal Baptist for, I'd say, the last couple of months. I actually talked to a couple of other schools before, and during, the time I talked to them."

Delgado said he has been working out on his own, but has not been able to throw. "I am currently recovering from an elbow injury," he said.

What won Cal Baptist over as far as Delgado was concerned was, "When I went on a visit, I just felt at home on the campus," he said.

"Getting on the field, I felt comfortable with the campus. It just felt like the place where I needed to be."

When the pandemic truncated the 2020 Righetti season in March with the Warriors sitting at 4-4, Delgado had a 1-1 record.

However, he had allowed just one run, unearned, in seven innings pitched before the elbow injury. Delgado had struck out 10 batters and walked two.

Schools closed statewide in March because of the pandemic. The CIF State office formally announced April 3 that all spring sports post-season events were cancelled.

Delgado, a three-year varsity pitcher, helped the Warriors reach the CIF Central Section Division 1 semifinals in 2019, Delgado's junior year. He was 6-4 with a 2.83 ERA in 14 appearances that season.

Delgado was 4-3 with a 2.30 ERA his sophomore year. During his varsity career at Righetti, Delgado struck out 108 batters and walked 50.

The hard-throwing right-hander said he will attend Cal Baptist on a partial scholarship.

"It's a little bit of both, athletic and academic, more athletic than academic," said Delgado.

Most Cal State and UC schools, it was announced recently, will be online during the 2020 fall semester because of the pandemic, though Cal Poly said at the time it was weighing options.

As for Cal Baptist, "As of right now, I know they're scheduled to start with physical classes, in September," for the 2020 fall semester, said Delgado.

Cal Baptist, with a listed fall 2019 enrollment of 11,045 students, doesn't have the large-population difficulty many Cal State and UC schools face during the pandemic.

The Cal Baptist baseball team was sitting at 7-8 in 2020 before the NCAA cancelled the remainder of its spring sports in March because of the pandemic.

Regarding online learning, Delgado was succinct. "I would rather be in class," he said.

'I feel loved by everyone': Adopt-A-Senior program gives local students a positive send-off

Coronavirus Class of 2020: Buellton, Lompoc seniors look to the future

Eighteen-year-olds Jaime Miguel Gonzalez and Dionysius Clark are just trying to stay positive in the midst of the pandemic.

In a CIF-SS Division 4 title game in November of 2015, the top-ranked Warriors scored 11 of the last 12 goals and eased to an 11-2 win, completing a back-to-back divisional title run under Righetti co-coaches Kyle Shaffer and Rob Knight.

Righetti's Ryan Delgado pitches against Nipomo at the Warriors' field during a game last February.

Righetti's Gavin Long, left, high-fives Ryan Delgado after he scored against Nipomo at the Warriors' field in February. Delgado suffered an elbow injury before the high school baseball season was eventually canceled due to the coronavirus pandemic. Delgado will pitch for Cal Baptist after graduating from Righetti High.