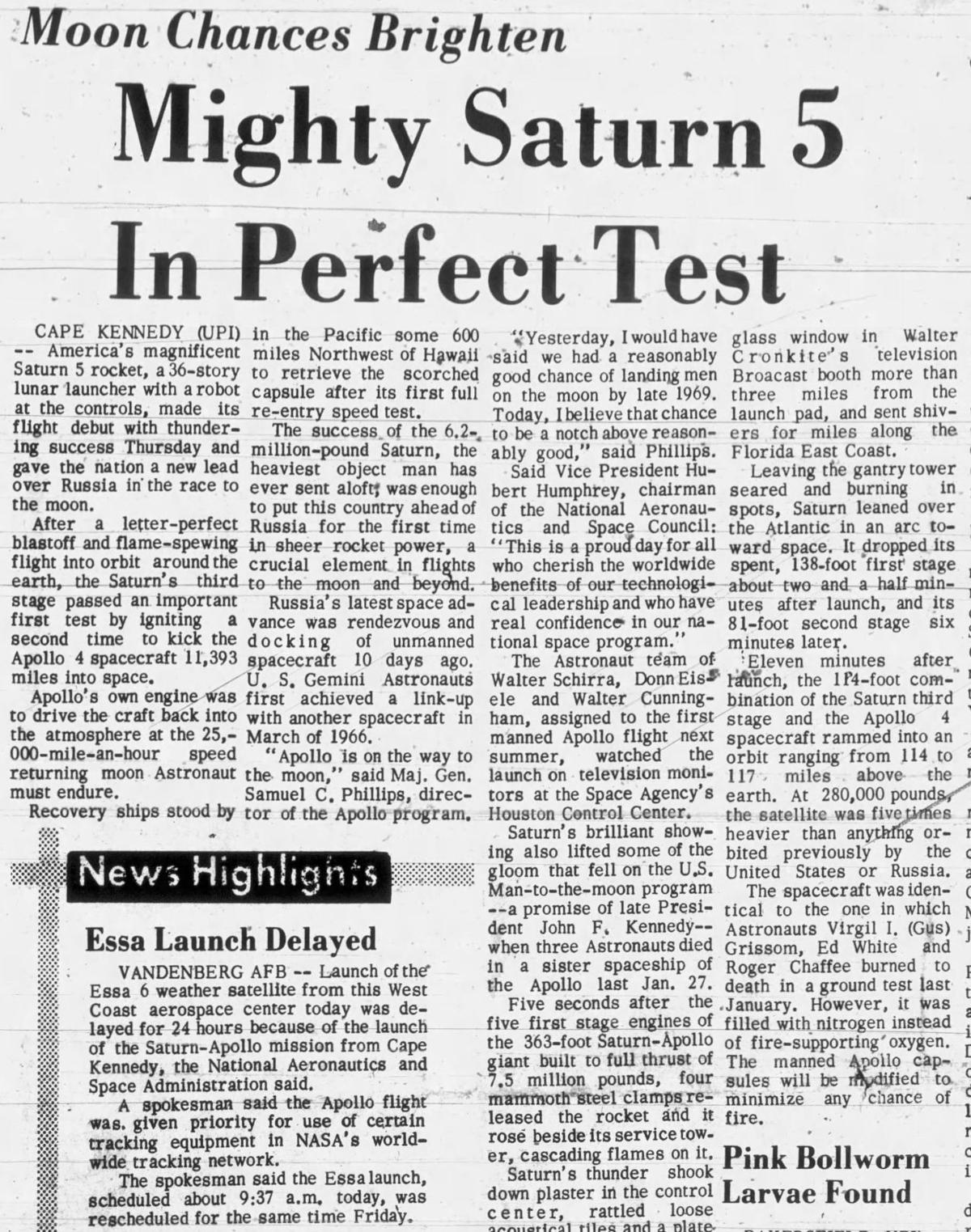 With those words, astronaut Neil Armstrong fulfilled a dream as well as a promise uttered by President John F. Kennedy eight years earlier, when he became the first human to walk on the moon. The date was July 20, 1969 — 50 years ago this month.

Like the rest of the world, Central Coast residents, many of whom lived and worked at Vandenberg Air Force Base, were glued to their TV sets watching the efforts of the American space program and following the progress in the Santa Maria Times.

The day of the moon landing (and Armstrong's historic walk) was a Sunday, and at the time the paper did not publish on Sunday. However, the Monday, July 21, edition came out with the story, and reports of the astronauts' departure from the moon.

The landing and moon walk were the culmination of an effort launched by President John F. Kennedy in 1961, when he addressed Congress on May 25 asking for $9 billion to advance the U.S. space program and stated his main goal:

"... I believe that this nation should commit itself to achieving the goal, before this decade is out, of landing a man on the Moon and returning him safely to the Earth. No single space project in this period will be more impressive to mankind, or more important for the long-range exploration of space, and none will be so difficult or expensive to accomplish."

The Santa Maria Times chronicled Kennedy's request in its edition later that day.

The desire to put a man on the moon was a desire borne out of the emerging Cold War between the U.S. and the Soviet Union, and a big part of that was the so-called "Space Race" between the two countries.

After Mercury came the Gemini program, which involved many of the same individuals who would take part in the Apollo program. The aim of the Gemini program was to develop space flight techniques and fine-tune the plans to send a man to the moon. This Santa Maria Times article reported the efforts of Ed White and James McDivitt in the Gemini program.

In 1966, the U.S. was ready to begin its program to put an astronaut on the moon by moving forward with the Apollo program. After three unmanned flights, NASA was ready to launch its first manned mission, slated for Feb. 21, 1967.

However, tragedy struck during a launch rehearsal on Jan. 27, when Command Pilot Virgil I. "Gus" Grissom, Senior Pilot Ed White, and Pilot Roger B. Chaffee, were killed when a cabin fire ignited in the capsule.

After the deaths of the three astronauts, manned flights were discontinued for 20 months while the problems that caused the failure were addressed and fixed. The tragic mission was named Apollo 1 in memory of the fallen astronauts.

In October 1968, the program pulled off its first manned flight as Apollo 7 blasted off with Wally Schirra, Walt Cunningham and Donn Eisele on board. Apollo 7 stood out as the first three-person American space mission, and was also the first to include a live TV broadcast from an American spacecraft.

The Apollo 7 launch was highlighted in a story on the front page of the Oct. 11, 1968, Santa Maria Times along with the photo of the launch at Cape Kennedy Air Force Station (now more commonly known as Cape Canaveral).

The program's second manned spaceflight, Apollo 8, was launched two months later, on Dec. 21, 1968. The flight was notable in that it was the first manned spaceflight to reach the moon. The crew orbited the moon 10 times in the course of 20 hours. Also, the mission was part of a Christmas Eve 1968 TV broadcast that at the time was the most-watched ever.

The crew for Apollo 8 consisted of Frank Borman, James Lovell (who would be part of an ill-fated spaceflight two years later) and William Anders. After the successful mission, the three would be named Time Magazine's Men of the Year for 1968.

The front page of the Dec. 21 Times led with the Apollo 8 launch. The paper hints at the interest of the Central Coast in the space program, as the Times' front-page flag billed the city as "The Missile Capital of the Free World."

As the calendar flipped to 1969, NASA and the U.S. government could see their dream of a moon landing getting closer.

Apollo 9, launched March 3, 1969 and manned by McDivitt, David Scott and Rusty Schweickart, had the objective of testing the lunar module, which would take the astronauts onto the moon surface, and its ability to land and then reconnect with the command space module. It was a success.

Apollo 10 launched May 18, 1969 with Thomas Stafford, John Young and Eugene Cerman, and served as a 'dress rehearsal' for the moon landing that would come. According to the "Guinness Book of World Records" in 2002, the mission set a record for speed by a crewed vehicle, 39,897 km/h (or 24,791 mph) during its return from the moon.

After Apollo 10, it was time to make landing on the moon a reality as Apollo 11 took off, with Armstrong, Buzz Aldrin and Michael Collins on board. The mission was launched on July 16 and Americans waited back home in anticipation of a historic event.

The Times captured the photo of the rocket taking off from Florida with the apt headline "Up, Up and Away!"

Four days later, Armstrong and Aldrin maneuvered the lunar module Eagle to the moon's surface. Armstrong stepped down onto the surface about six hours later, uttering the famous line that starts this article.

In the days and hours between launch and landing, the nation was thick with hope and anticipation, which the Times captured on July 19 with local residents reactions to the upcoming event.

After the landing and the walks on the moon, the Apollo 11 crew made its way back to Earth, splashing down on July 24 to a hero's welcome.

The Apollo 11 mission clinched the "Space Race" with the Soviets in the eyes of many and fulfilled the promise of the late President John F. Kennedy to put a man on the moon before the end of the decade.

As with the launch and moon landing, the Times gave prime front-page space to the return of the astronauts in its July 24, 1969, issue:

After Apollo 11, six more Apollo missions were launched, with five of them making successful landings on the moon. The one exception was Apollo 13, which launched April 11, 1970, with Lovell, Fred Haise and Jack Swigert on board.

The mission was expected to land on the moon, but before the module got there an oxygen tank exploded, crippling the service module on which the command module depended to operate. Despite the difficulty caused by limited power and water, and loss of cabin heat, the crew returned safely to earth on April 17. In the process, the flight passed the far side of the moon and set a spaceflight record for most miles humans have traveled from Earth.

Aside from Apollo 11, Apollo 13 is probably the most well-known mission in the program, helped no doubt by the 1995 movie of the same name that starred Tom Hanks, Ed Harris and Kevin Bacon.

The Times was ready in its April 17 edition with news that the astronauts had returned home.

After Apollo 13, there would be four more missions, all resulting in successful moon landings.

Apollo 17 was launched Dec. 7, 1972, with Cerman, Harrison Schmitt and Ronald Evans aboard. The mission was known for many records: the longest moon landing (three days), longest time in lunar orbit, and, at 75, most lunar orbits. The crew returned on Dec. 19, as reported on the front page of that day's Times. It would be the last mission of the Apollo program.

As part of our coverage of the 50-year anniversary of the Apollo 11 moon landing we are looking for your memories of the mission and the coverage. Where were you, what were you doing when man first walked on the moon?  Use this online form to send us your memories of the event https://santamariatimes.com/forms/reader_submitted/what_are_your_memories_from_the_apollo_11_mission_to_the_moon/.

You can also go online to sign up for a News+ Membership to support the Santa Maria Times and the local journalists who work to bring these local stories to you every day.

Where were you during the July '69 Apollo 11 landing? Let us know, and we will add it to our 'Apollo Memories'!

Collection: 'From the Vault' series allows you to take a look back at our historic archives

Lights and Sirens in Santa Maria

The following is taken from the Santa Maria Police Department's calls-for-service log and the Santa Barbara County Sheriff's Office daily arrest log. Those appearing as "arrested" are only suspected of the crime indicated but are presumed innocent.

The parade route will travel through Solvang, Santa Ynez, Ballard and Los Olivos before stopping at Santa Ynez High School for a last goodbye.

The Santa Barbara County Public Health Department announced the death of another individual confirmed for COVID-19, a Lompoc resident, on Friday.

'We need a voice': Hundreds participate in peaceful protest, march through Lompoc

At least 400 people took part in the rally, which was arranged by several local young adults in response to the death of George Floyd, a black man who was killed by police officers on Memorial Day in Minneapolis, Minnesota.

Dear Abby: Newlywed is questioned about keeping her name

DEAR ABBY: I'm in my mid-30s and have just been married for the first time. I chose not to take my husband's last name for several reasons. I have a child from a previous relationship who shares my name; I have a unique name that I love; and I am established in a career in which name recognition is important. I am also an older bride. Unfortunately, I didn't discuss it with my husband before the wedding, although I did explain my reasoning later.

Sheriff Bill Brown: When the badge gets tarnished

SHERIFF BILL BROWN Our badges were tarnished by what happened in Minneapolis, but we will continue to work in ways that will restore their luster. 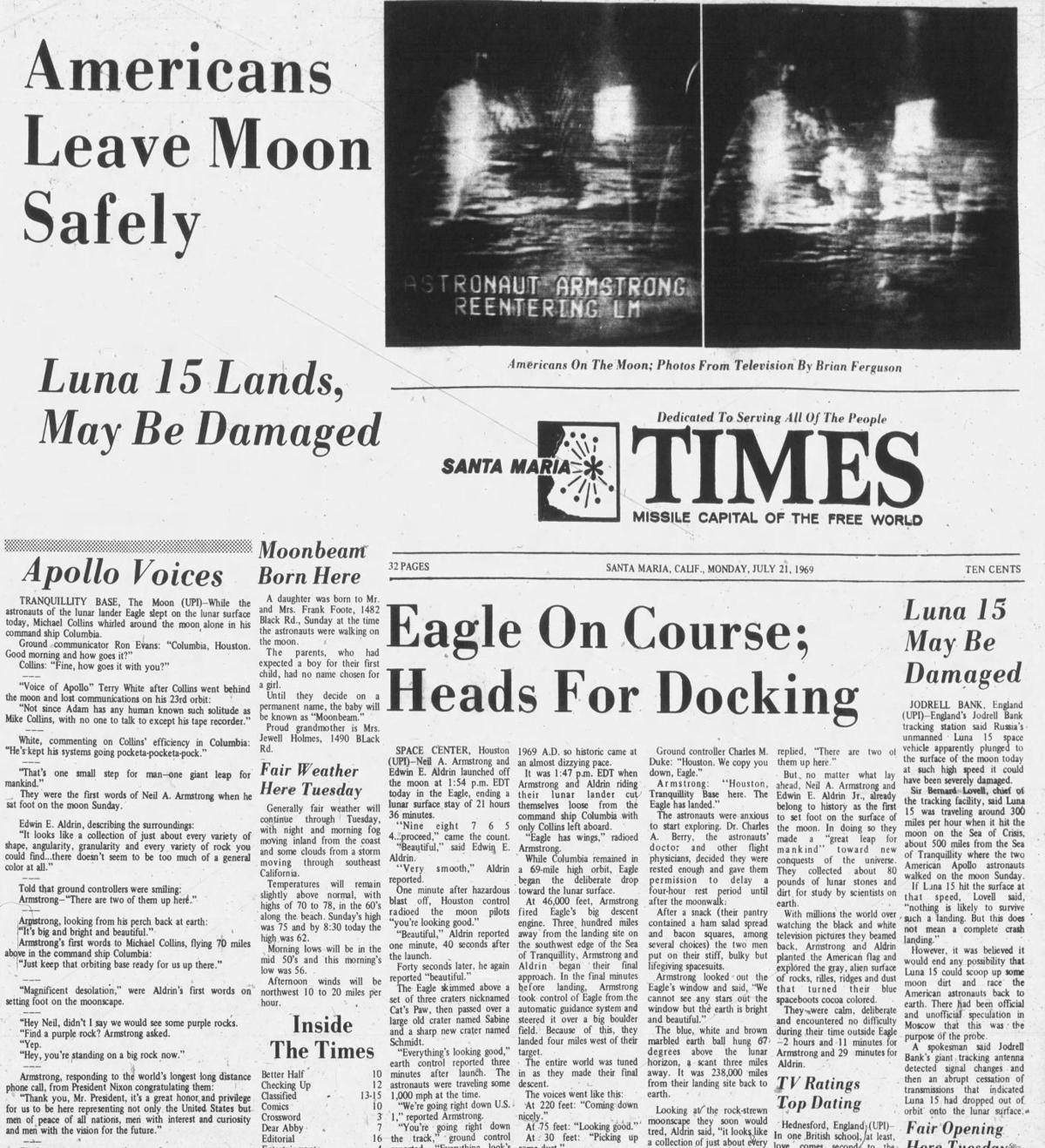 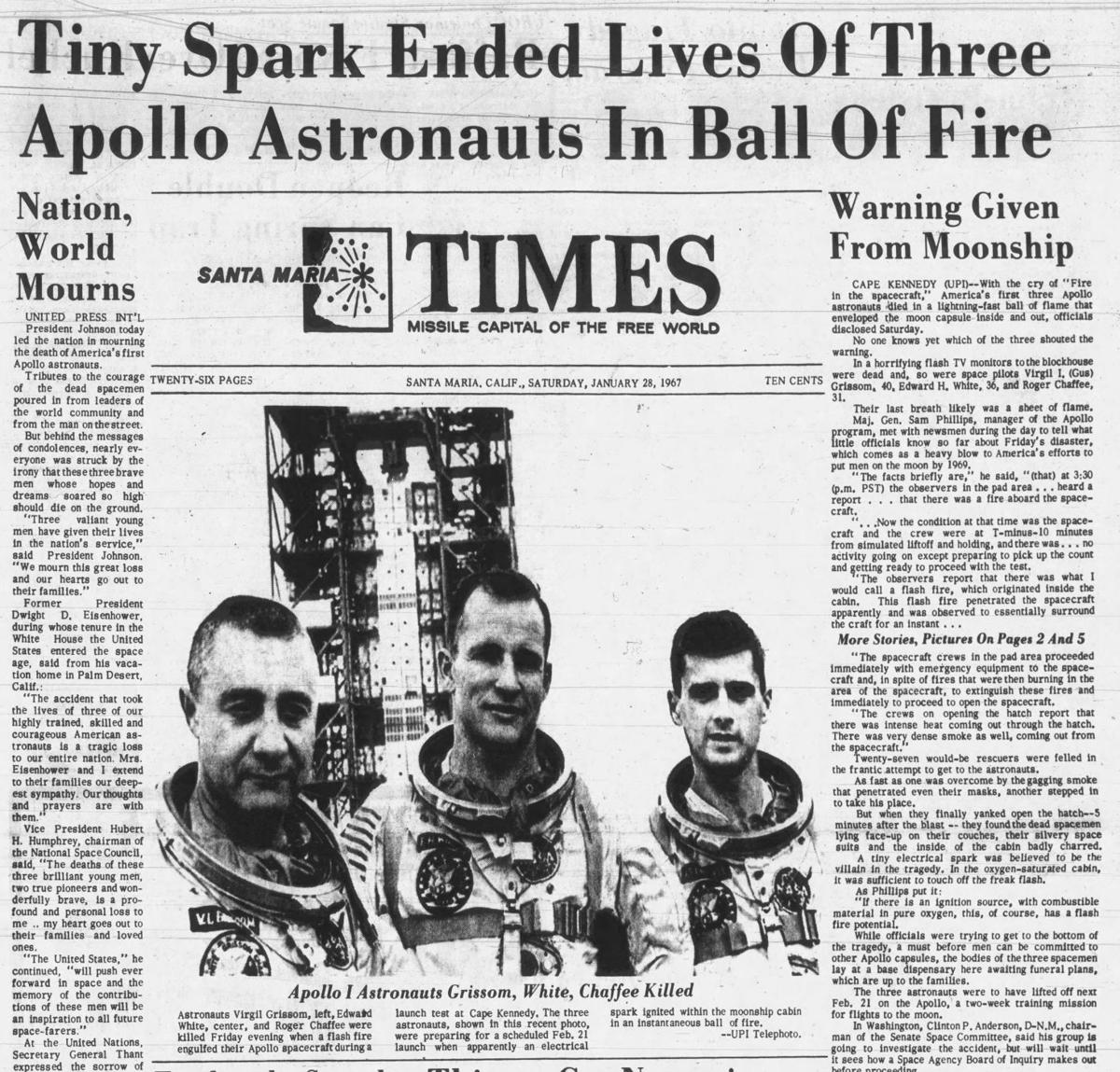 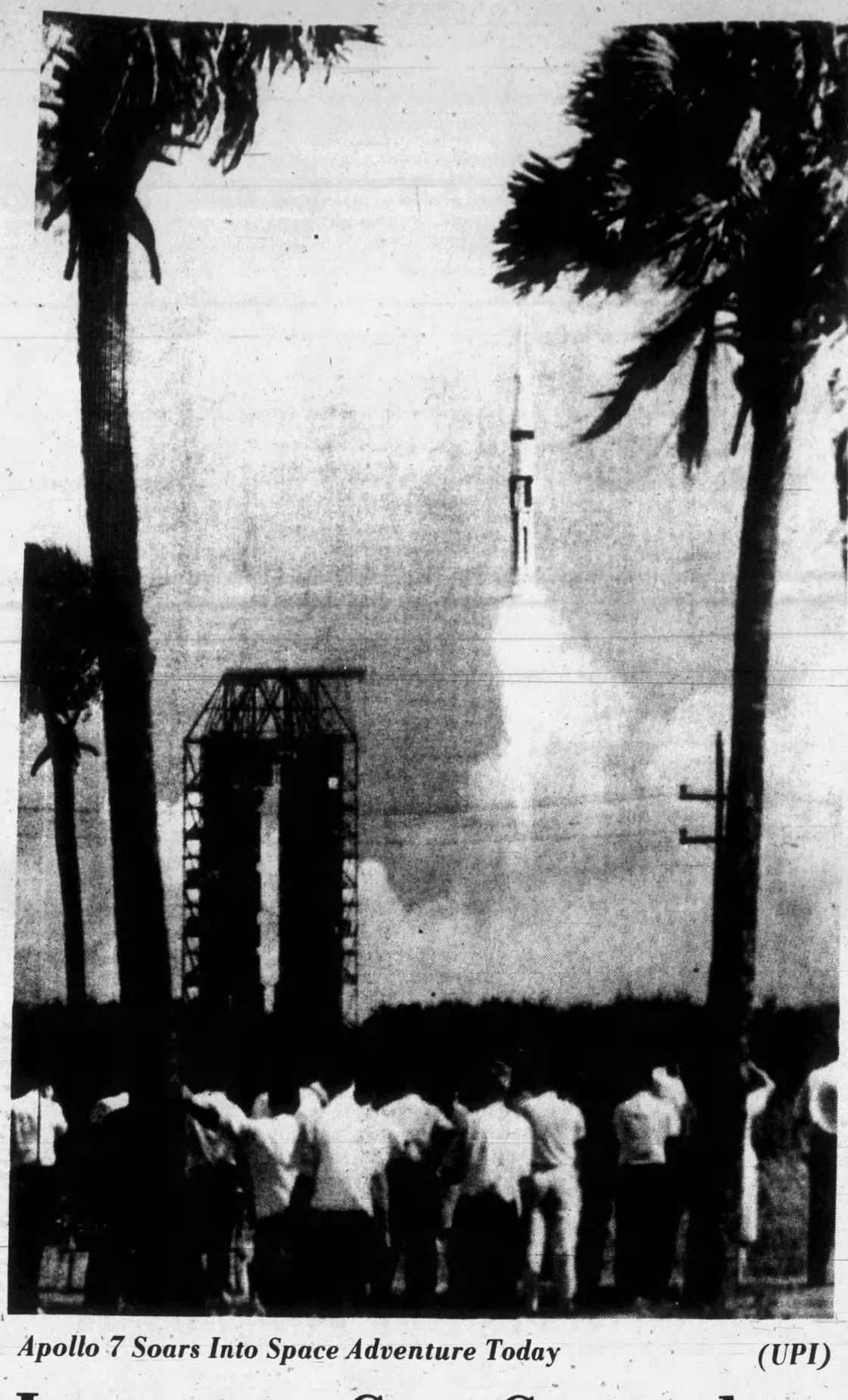 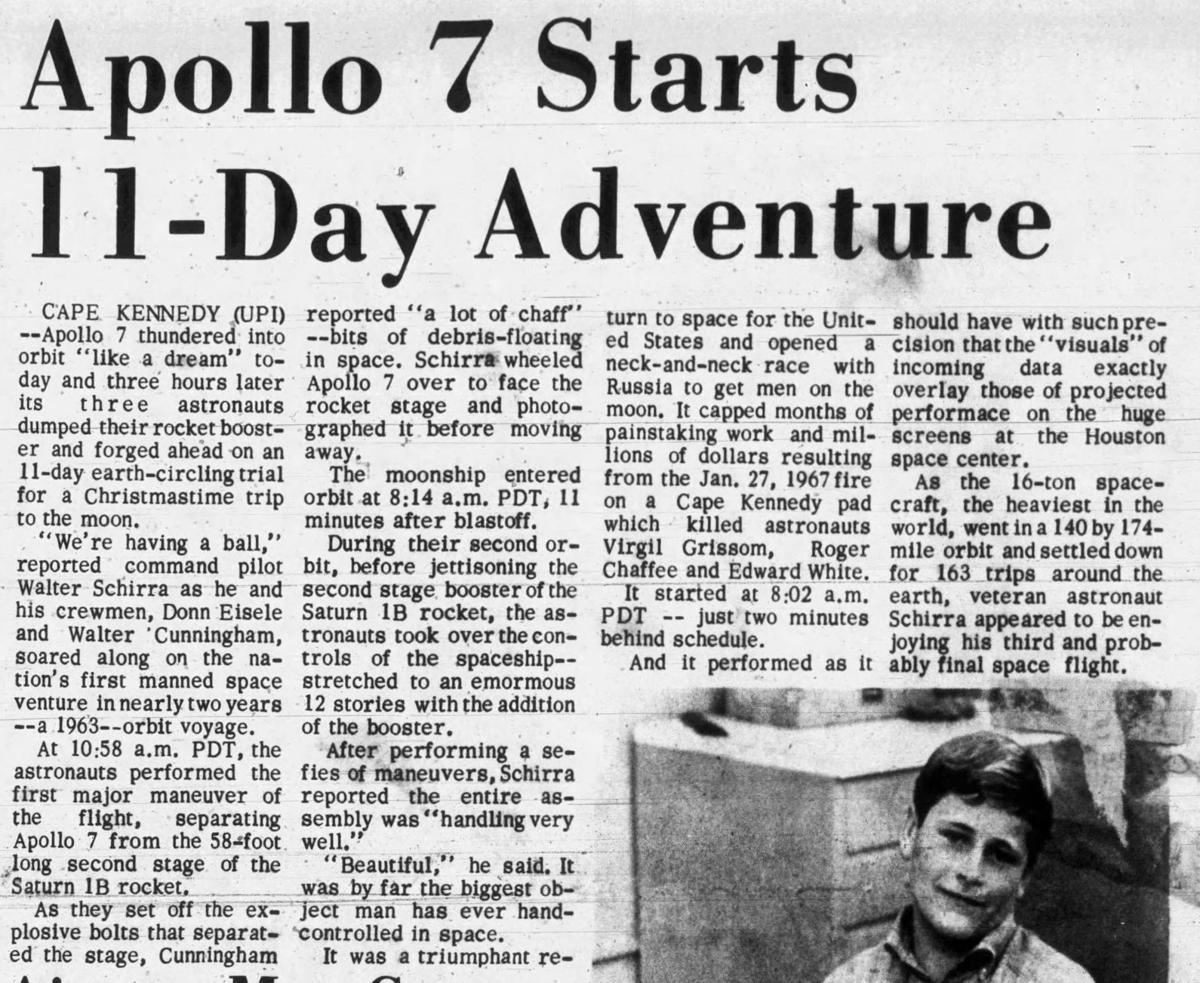 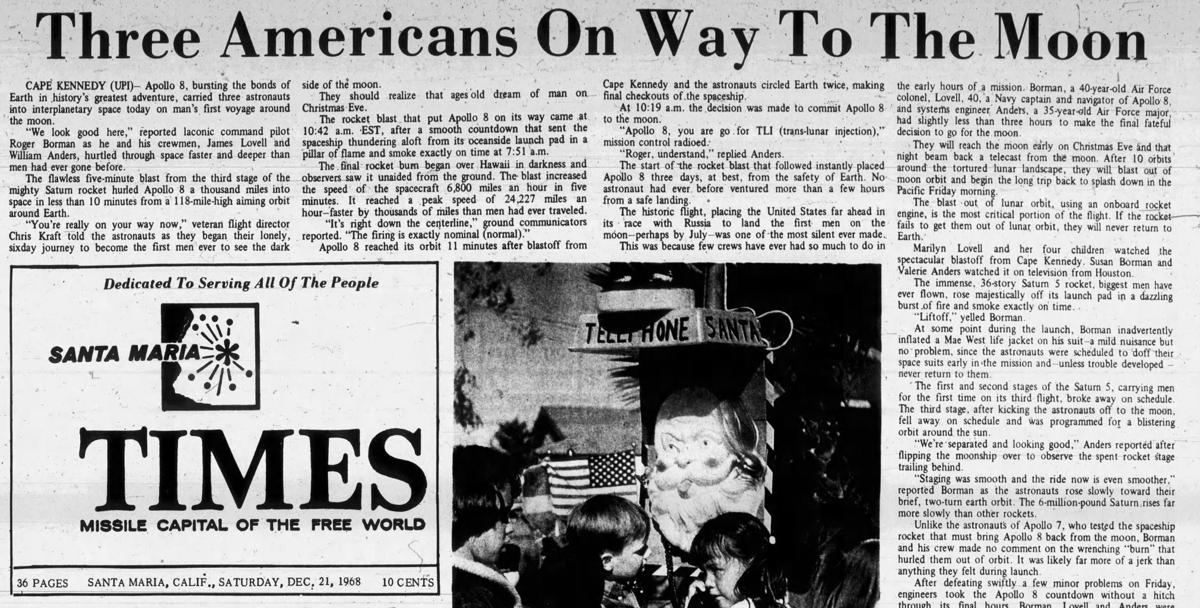 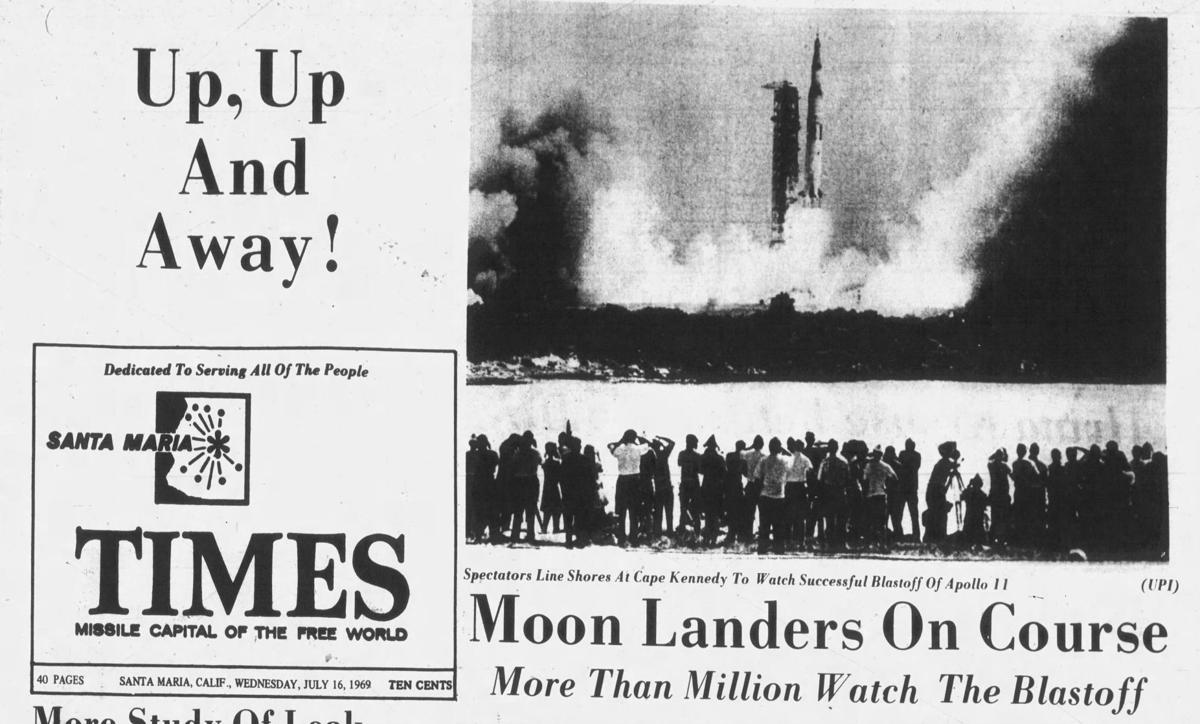 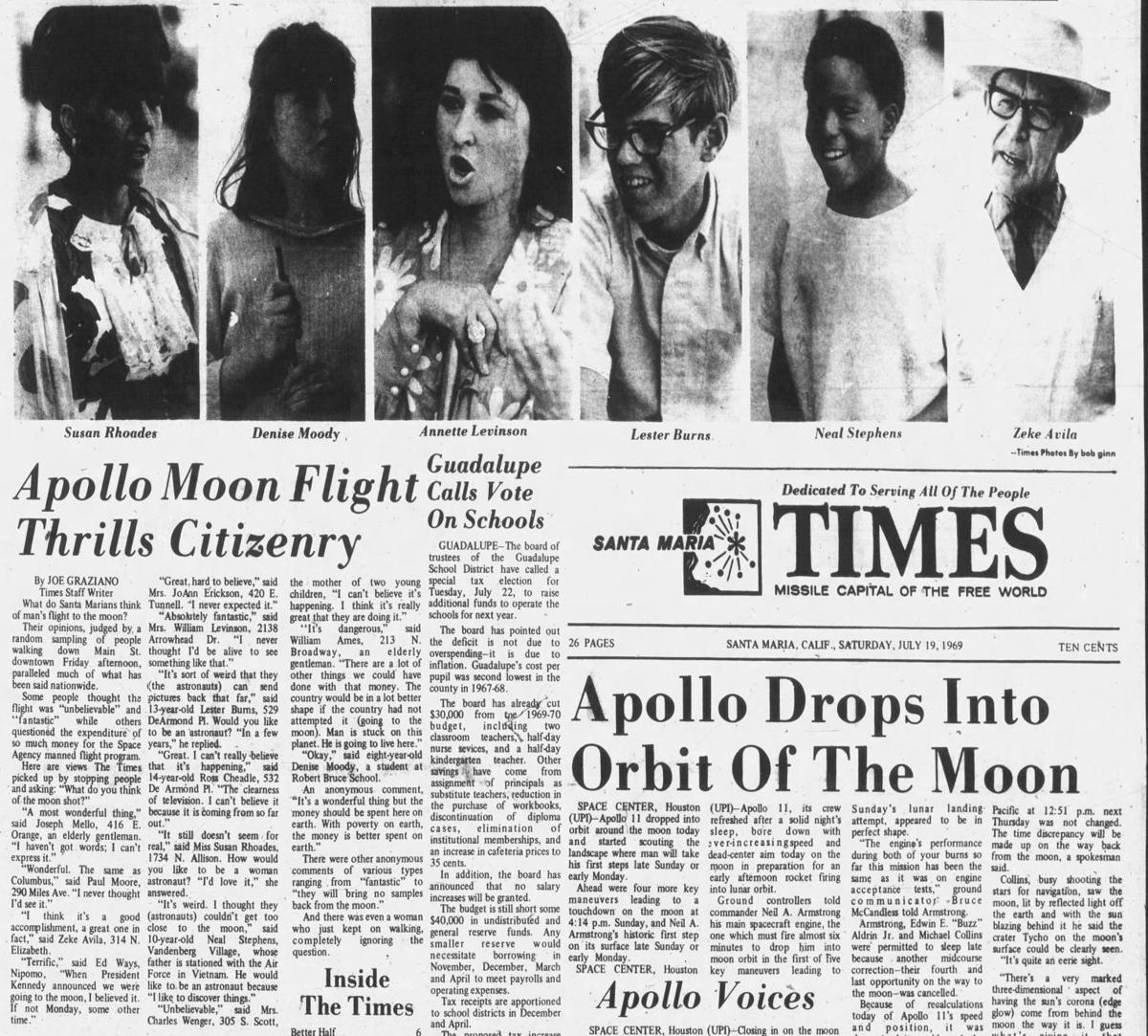 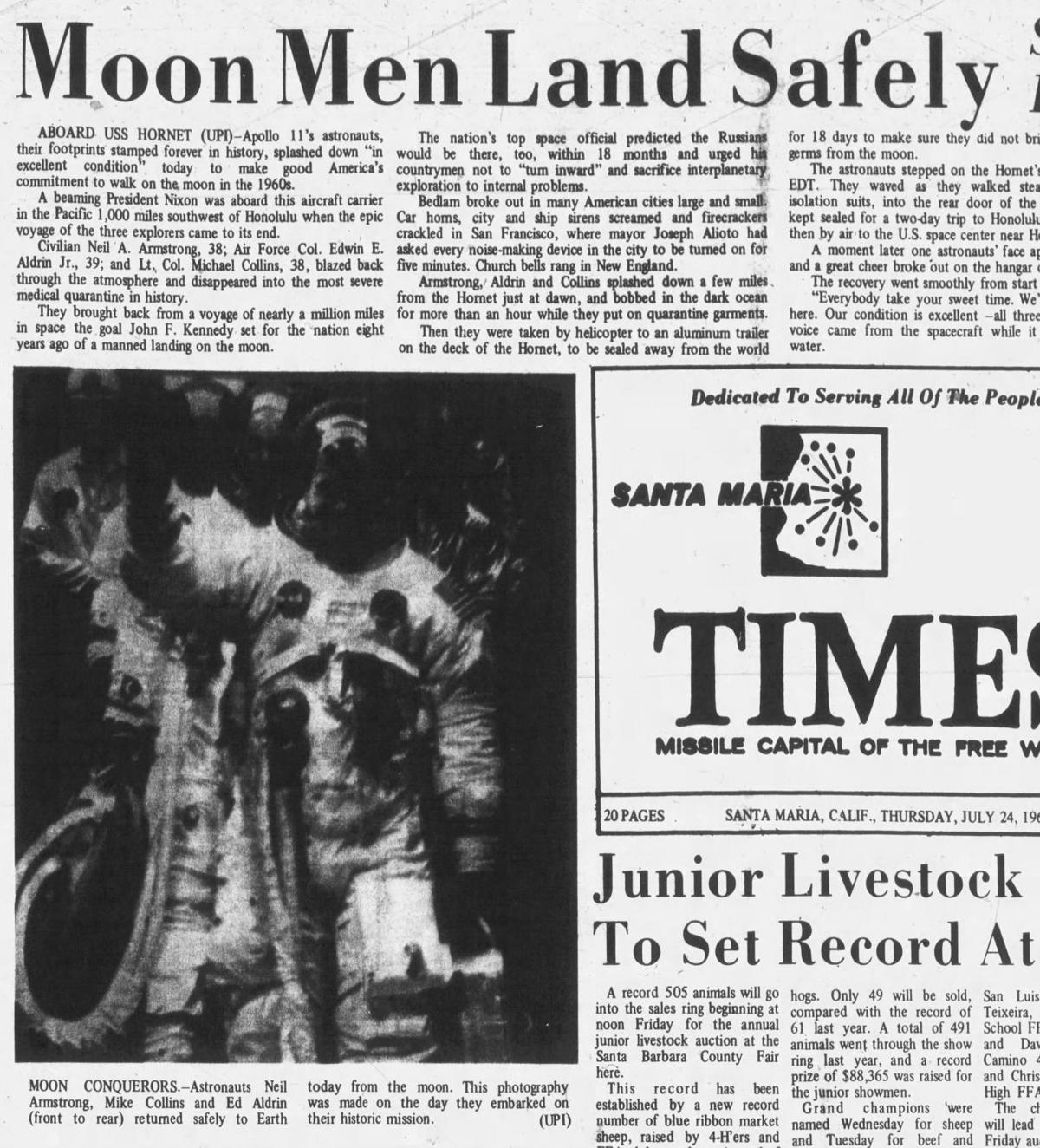 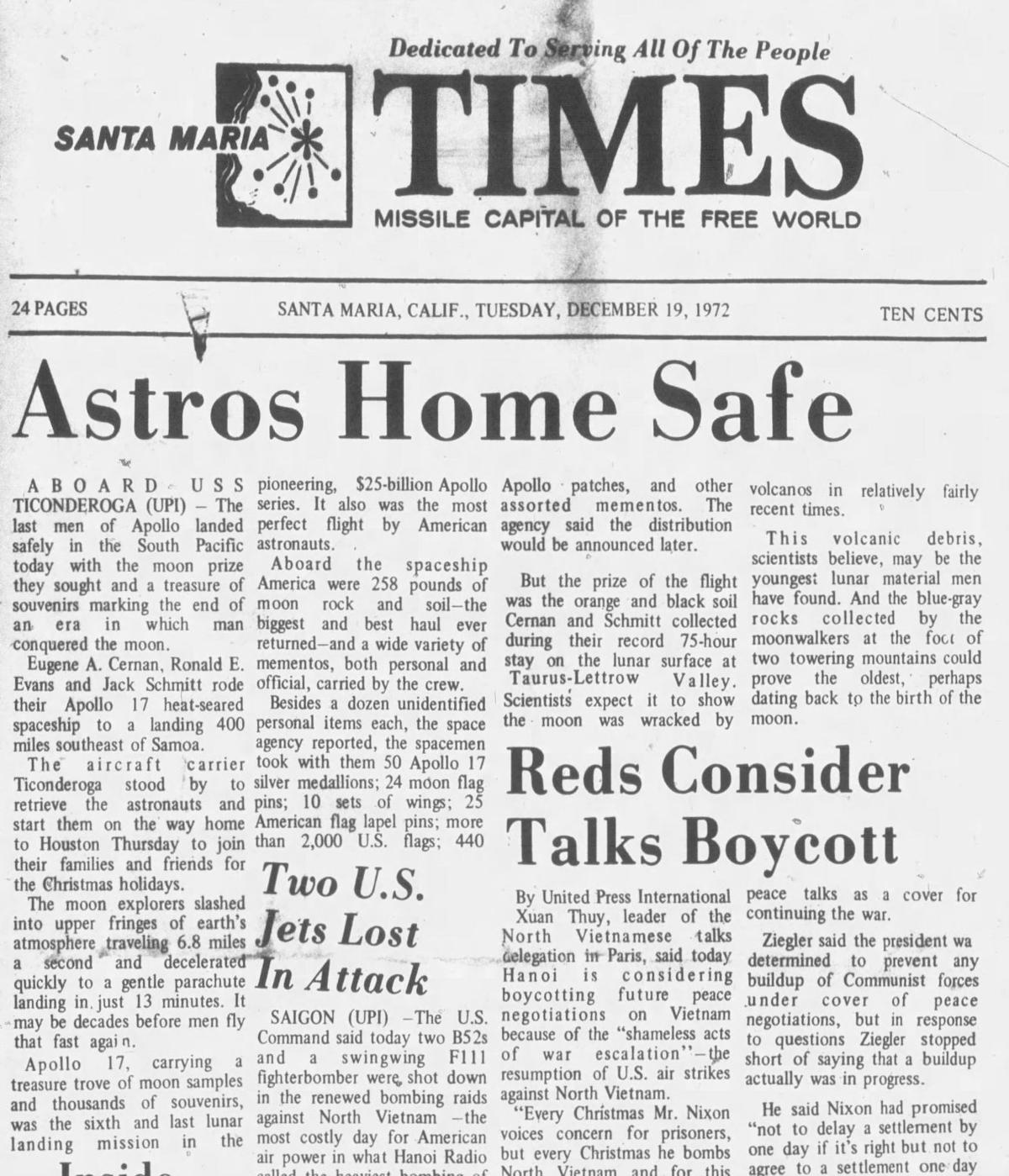