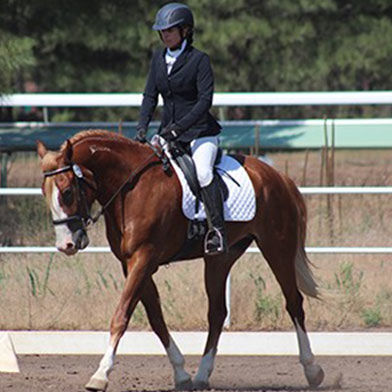 Jamie rides Zeus, a mustang she purchased from the Arizona prison program where inmates train the horses for their first saddle and rider, at a 3-Day Eventing function composed of dressage, jumping and cross country. 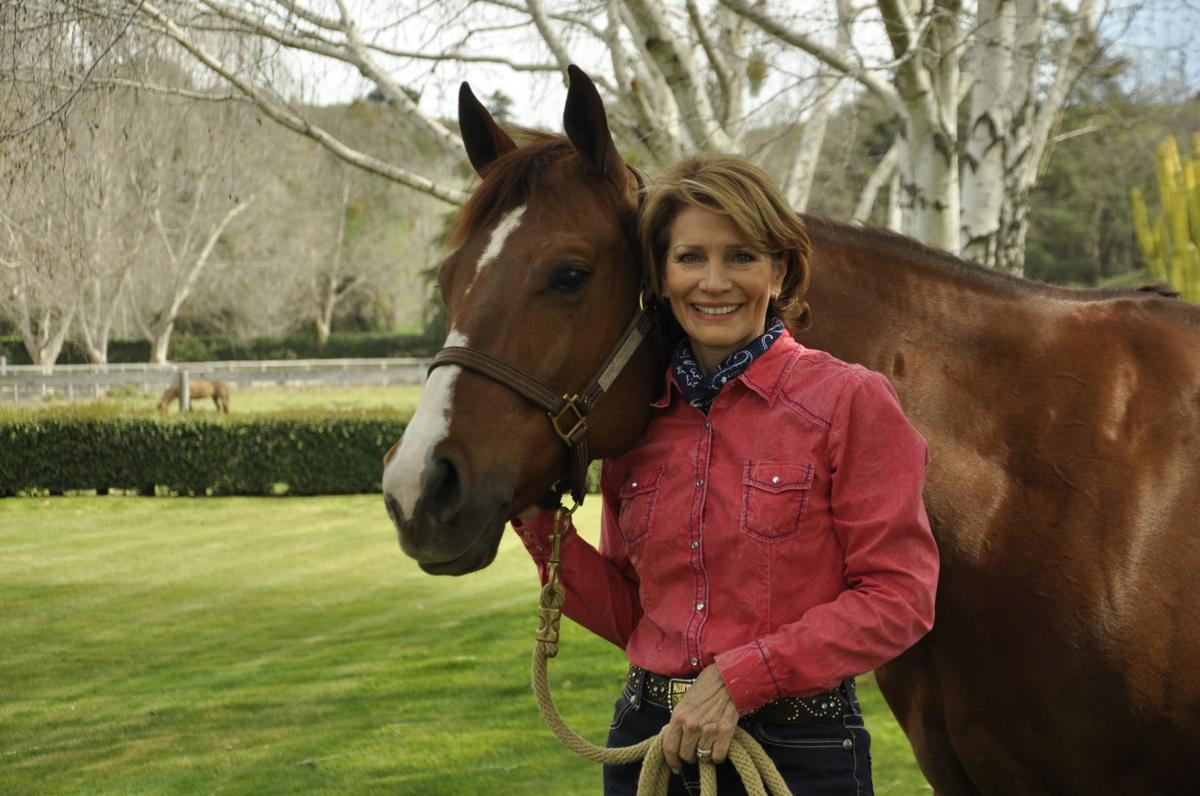 Debbie Loucks with the family's horse, Bunny, which is short for Steel Buns.

Anyone who has spent a great deal of time at an equestrian center knows a “that girl.” She is often at the barn before anyone else and usually the last to leave. Born with the horse gene, “that girl” is often up for an adventure, always on a horse’s back and never shies away from a challenge. She has the best stories and might even be sporting a bandage or two after the weekend.

Not everyone wants to be “that girl," but we admire her pluck and knowledge of horses.

The rest of us at the barn are drawn to her because we know she is going to do something great with her horses, even if it means she has to rescue them from an irresponsible owner. She loves to compete and measures her performance by how much fun the horse had. “That girl” is often into extreme sports and absolutely loves her horses.

This is one of those miraculous stories that is helping to change the world in the way we treat horses. I hope it will give the reader a reason to want to be “that girl” at their barn.

Six years ago, I organized a Monty Roberts demonstration in Sedona and invited Jamie Jennings, a radio personality and podcaster to attend. She accepted and came with a friend. She was impressed by the nonviolent training she witnessed and wrote to me the next day.

Debbie Roberts Loucks: How to desensitize an anxious horse

Horses that hold onto fears of specific rather than common items are doomed to be anxious and nervous their entire lives in the presence of those items. Taking the time to get them comfortable with that object will add to the enjoyment for horse and rider. Many riders even exacerbate the fears by avoiding the very things they should help the horse get used to.

“I swear I woke up this morning inspired and ready to change the way I work with my horses," she wrote. "I had both ridden by 10 a.m.! (and that says a lot when I got home at almost 2 a.m.!) I cannot wait to try the trailer loading with Thor! I am so excited!”

A few months later, Jamie registered for our Gentling Wild Horse course in California, arriving with her son, who was a year old at the time, her husband and her adopted mustang, Thor.

They were to stay through the five-day course in a living-quarters trailer and continue training Thor at the end of each day. Thor had received his first saddle and rider in an Arizona prison system program and tended to bolt. Jamie’s favorite thing has been to transition horses off the racetrack to their second careers She also has a deep love for gentling mustangs.

Jamie had ridden for many years and was clearly a good rider, smitten with horses and desperately wanting to learn more about how to train them in the absence of violence.

Subsequent to this course, Jamie began to mention Monty’s work to her radio audience. She had been in the show ring in many disciplines and was educated under many well-known trainers, yet as she learned the gentle techniques, she was mystified as to why these concepts were not being taught everywhere.

The next horse was led in like a fire-breathing dragon, with a handler on both sides of him. Eduardo went to work and this horse was many times over tougher than the first...

Over the next couple of years, Jamie and I collaborated on many podcasts to share the concepts that were improving her horsemanship and helping her horses have more fun in their sport, most often at 3-Day Eventings.

Jamie, having been an exercise rider at the racetrack, became very interested in the effort being made to take on retiring racehorses and put them through appropriate training so as to find them a new home and vocation.

There was a organization called Horse and Hound Rescue near Jamie that she contacted to express her interest in training retiring racehorses, giving them the skills to reorganize their future and helping to find appropriate individuals to give them a new life.

Just this past year, Jamie was able to successfully help re-home over 90 thoroughbreds.

Queen Elizabeth II last year recognized Jamie with a signed certificate for her extraordinary efforts to reduce violence in the training of horses and her dedication to assist veterans and first responders with post-traumatic stress disorder. She had adopted Monty Roberts’ concepts and initiatives and become a certified facilitator at the Horse Sense & Healing clinics.

There are about 200,000 unwanted horses in the United States that need new homes.

Hundreds of racehorses every year are sent to slaughter, but Jamie and The Right Horse Initiative are helping change that statistic, allowing these horses to thrive for the balance of their lives, which could mean as many as a dozen years or more with people who ride, love and even compete on them.

2020 was the first year Jamie entered into this laudable effort, and now as a Monty Roberts certified instructor, she miraculously found new homes for over 90 racehorses, all of which were trained in the gentle methods.

Jamie has since been singled out and recognized by The Right Horse Initiative for the incredible work she does daily on behalf of horses in transition. She also was presented with the Good People for Good Horses Award as the United States trainer of the year for adoption horses.

Jamie is rapidly building on her idea as more horses come to her. She also has started another podcast, Retired Racehorse Radio, which addresses adoption and the care and training of the retired racehorse.

It is likely that in the next decade, Jamie will reach out to save the lives of thousands of racehorses and mustangs. It is a new and important step in the effort to find a kind way for these animals to spend their second careers.

Debbie Roberts Loucks: How do you love your horse?

You may have never considered what your horse needs are when it comes to affection. Surprisingly each horse is a little different, and our job is to figure out what constitutes affection for them.

Debbie Roberts Loucks: 2020 a year of wins for horses and people

This past year may have tested our limits but it also reaffirmed our values.

Debbie Roberts Loucks: A horseperson's guide to the Equus language

"You can’t quite call yourself a horseperson if you haven’t had a horse turn out from under you while riding, or make a 180-degree spin at the sight of something spooky..."

Debbie Roberts Loucks grew up on Flag Is Up Farms in Solvang and is the daughter of Monty and Pat Roberts. She is the founder of The Movement, an international symposium about the transformative nature of horses, and launched the Monty Roberts’ Mustang & Transition Horse Program in October of 2020. You can follow her on her popular podcast Horsemanship Radio.

“I don’t want any of my students to be as good as me; I want them ALL to be better.” — Monty Roberts

This is a man who takes his mussels seriously. It’s not that he loves eating mussels, but that he found a niche in farming them. Even with the challenges that go with any farming venture, he is passionate about...

After doing some research of my own over the past year, and talking to highschoolers who are taking the same steps I am to find their future career path, I have some tips from my own experience to share with anyone who may be interested.

Elaine Revelle: Mastering your starter for the sake of baked goods

With St. Patrick’s Day coming up in less than two weeks, let’s see if we can bake a tasty bread for the expected corned beef or Reuben sandwiches.

Average last frost dates remind us when it is safe to plant warm season vegetable and bedding plants, and prune or groom plants that are sensitive to frost.

Jamie rides Zeus, a mustang she purchased from the Arizona prison program where inmates train the horses for their first saddle and rider, at a 3-Day Eventing function composed of dressage, jumping and cross country.

Debbie Loucks with the family's horse, Bunny, which is short for Steel Buns.