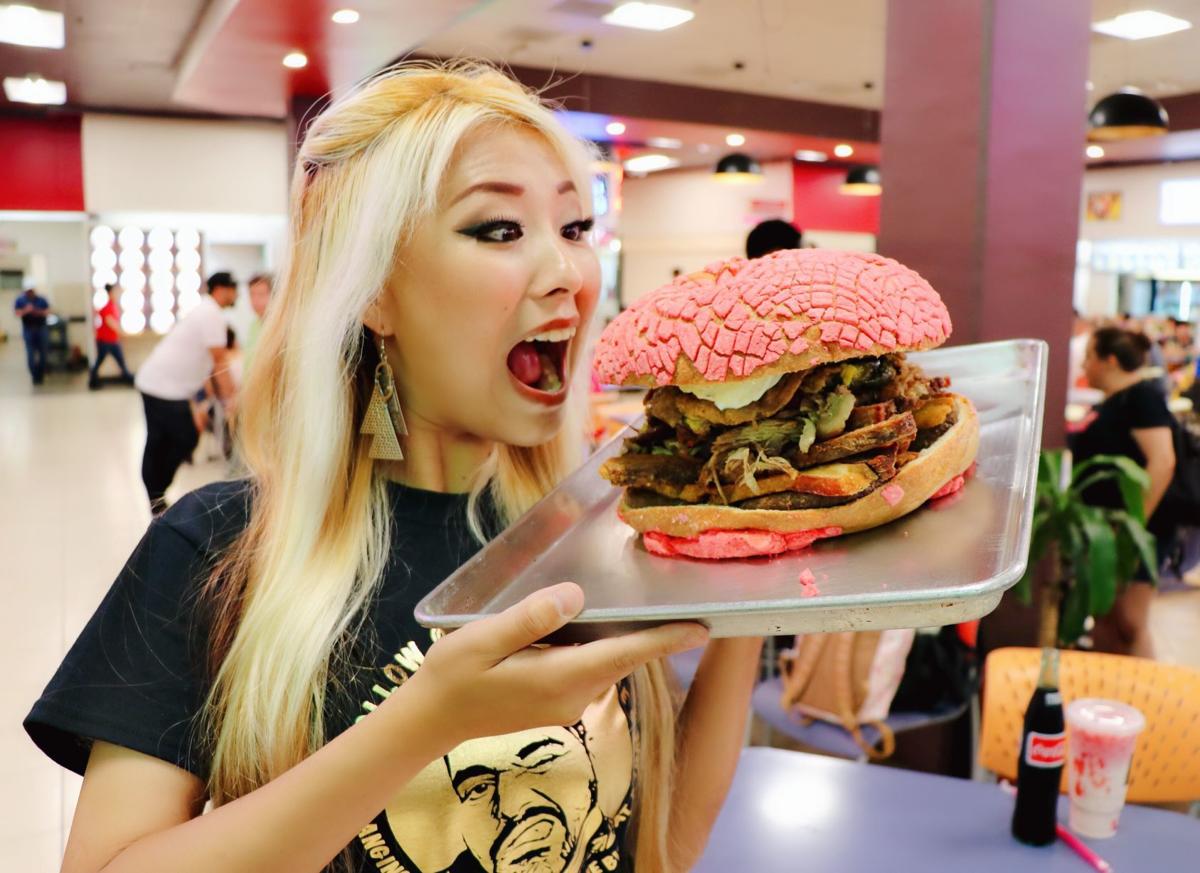 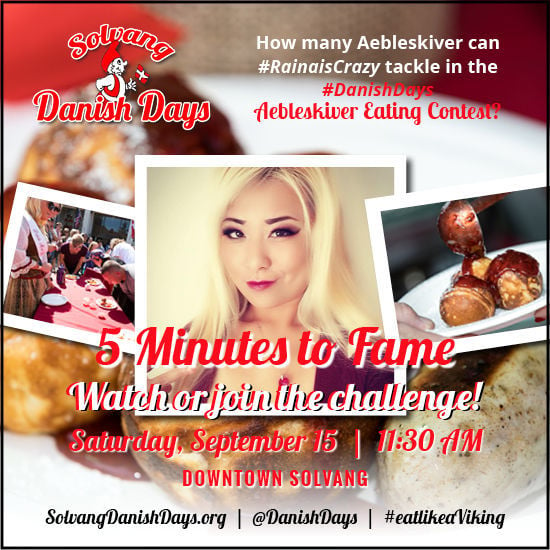 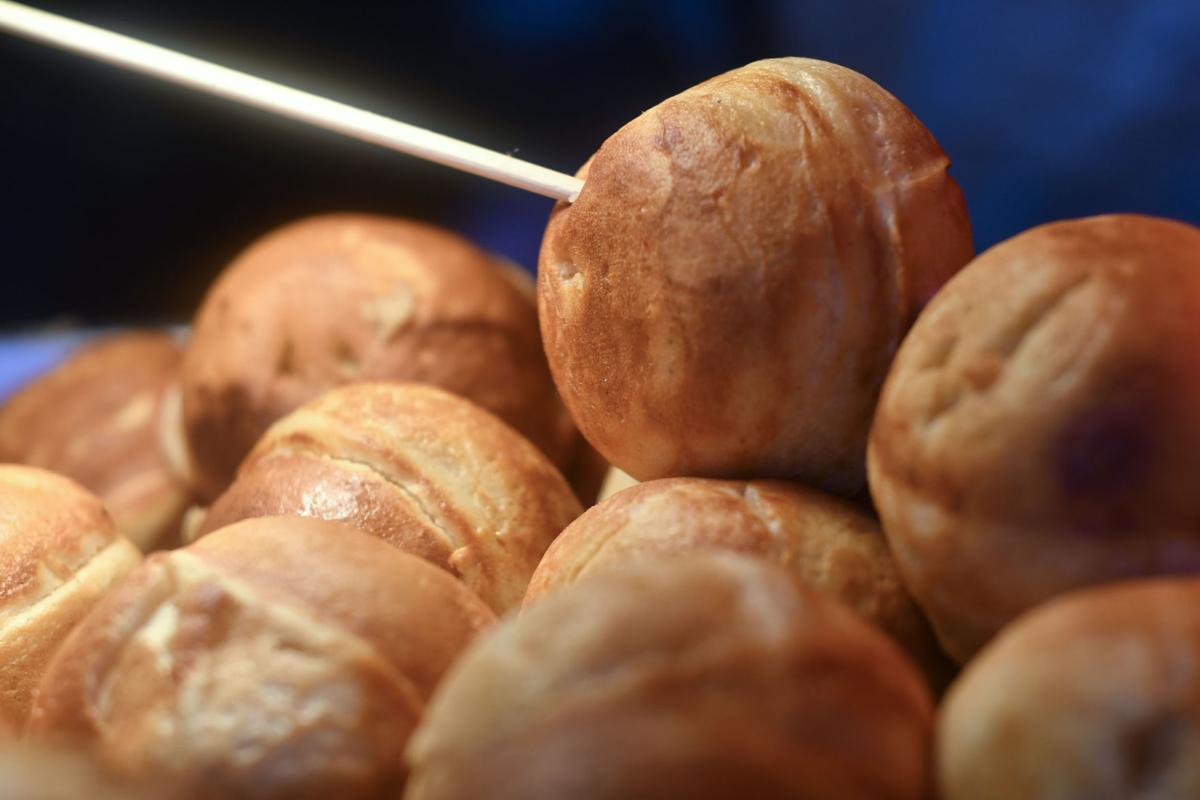 Aebleskiver at the Solvang Restaurant.

"This will be my first time in Solvang. I have no idea what an aebleskiver is," Huang said. Upon learning about the revered puffed pastry she replied, "That sounds delicious!"

The fastidious foodie will make her first-time stop in Solvang on Sept. 15 to gorge on aebleskiver with an aim to beat the standing 2016 record of 18½ eaten in five minutes. Then it's onward to Lompoc to attempt to eat the alphabet at Tom's Burgers with their signature A-Z burger menu that evening.

For her third foodie competition, she will make a stop by The Doggy Door in Los Olivos on Sept. 16 for their Hot Dog Challenge, which calls upon competitors to eat four of the establishment’s fully-loaded hot dogs within 90 minutes.

VIDEO: How to make an aebleskiver

Lastly, it's back to Lompoc on Sept. 18 to tackle Mariscos La Rancherita’s “Bacon Anaconda” before heading back to Los Angeles. She will be challenged to consume an oversized burrito rolled in bacon, all within 40 minutes.

"I have a crazy way of eating, it's gross but people are amazed. I have this trick where I chew my food with my hands," said Huang, who stands at 5 feet. 7 inches tall.

The night prior to competition, she says she chugs about 5 gallons of water to expand her stomach.

Saturday, Sept 15: 11:30 a.m. "Aebleskiver Eating Contest" to be held at the Danish Days Midgaard Pavilion in Parking Lot 2, in downtown Solvang, adjacent to the Danish Days Viking Beer & Wine Garden at Copenhagen Drive between First and Second Streets. Must be 21 years or older to enter Viking Beer & Wine Garden. Both eating contests are free to enter and open to the public. All ages are welcome to compete.

Saturday, Sept. 15: 5 p.m. "Tom’s Burgers (tomsburgersa2z.com) eating contest," located at 115 E. College Avenue #13, Lompoc. The public is invited to watch this contest, which might include the likes of the “C” burger, topped with peanut butter, the “K” burger, featuring banana, and the “Z” burger – one whole pound of patty.

"When the fluid is gone, I'm left with room," she said. "I also don't each much the day before and nothing the day of [competition] and do my weekly detox days."

However, all foods are not created equal.

"I naturally ate a lot as a child. In fact, my co-workers used to to tell me, 'You eat a lot, you should do a food eating contest,'" recalled Huang, an official full-time YouTube star for a little over a year.

Although Huang devours foods at a faster rate than most, she said she has an appreciative palette for Asian dishes since she comes from an Asian-American background. A speaker of Mandarin, Taiwanese, Japanese and some Korean, she said there is a natural affinity for the food she was raised on.

"Put me in a pho- or ramen-eating contest and I can go forever," she said.

But she's not so gung-ho about consuming mass quantities of spicy foods, since a past contest experience in the South left her with a searing memory.

"Hamburgers are a real challenge for me, too; they are dry and tougher to get down," said Huang, 23.

She does have a long-term goal for her "weird talent," as she put it, as it has taken her abroad to Madrid and Valencia, Spain.

Huang was invited to participate in several eating contests in Europe, where she said the phenomenon is just starting to catch on, which spurred her desire to do more than just stuff her face.

"I know my body isn't invincible and I won't be able to do this forever, so I try to mix in more food reviews on my channel. I'd like to become more of a food connoisseur and travel the world," she said.

Also a model and singer, Huang admitted her real love resides in entertaining and that her food inhibitions are really just the vehicle for her artistic expression.

"I'm just moderate crazy. I'm not aiming to be the best eater necessarily, I just do the best I can. I really just want to entertain."

The Danish Days Organ Concert will be on Saturday, Sept. 15 at 1 p.m. at Bethania Lutheran C…

Huang’s entire Central California tour begins Sept. 13 in Fresno and is detailed at rainaiscrazy.com/central-ca-tour.html. Contest results will be posted to that page of Raina’s website. To follow her eating adventures, visit her at youtube.com/RainaHuang, facebook.com/RainaHuang and Instagram @rainaiscrazy.

San Marcos Pass has been used to connect the coast and the Santa Ynez Valley for thousands of years. The Chumash used the Pass as the main trading route between the coastal and Valley Chumash villages. Later, the Spanish missionaries and soldiers used the Pass to travel between the missions.

Today in History: The Vietnam War ended as the South Vietnamese capital of Saigon fell

The honorary induction is celebrated in tandem with the resort's 75th anniversary this year.

Gary Litle passed away April 19, 2021 at the age of 77 after a valiant battle with cancer. He was a long time resident of Santa Ynez, CA. He g…

Today in History: Margaret Mitchell won the Pulitzer Prize for her novel, 'Gone with the Wind'

Today in History: Christopher Columbus landed in Jamaica in 1494

Allen "Peter " Johnson, former President and CEO of Valley Oaks Bank, died after a brief illness on April 25, 2021 in Rapid City SD. He was 85…

Today in History: Actor-singer Ann-Margret is 80

Aebleskiver at the Solvang Restaurant.