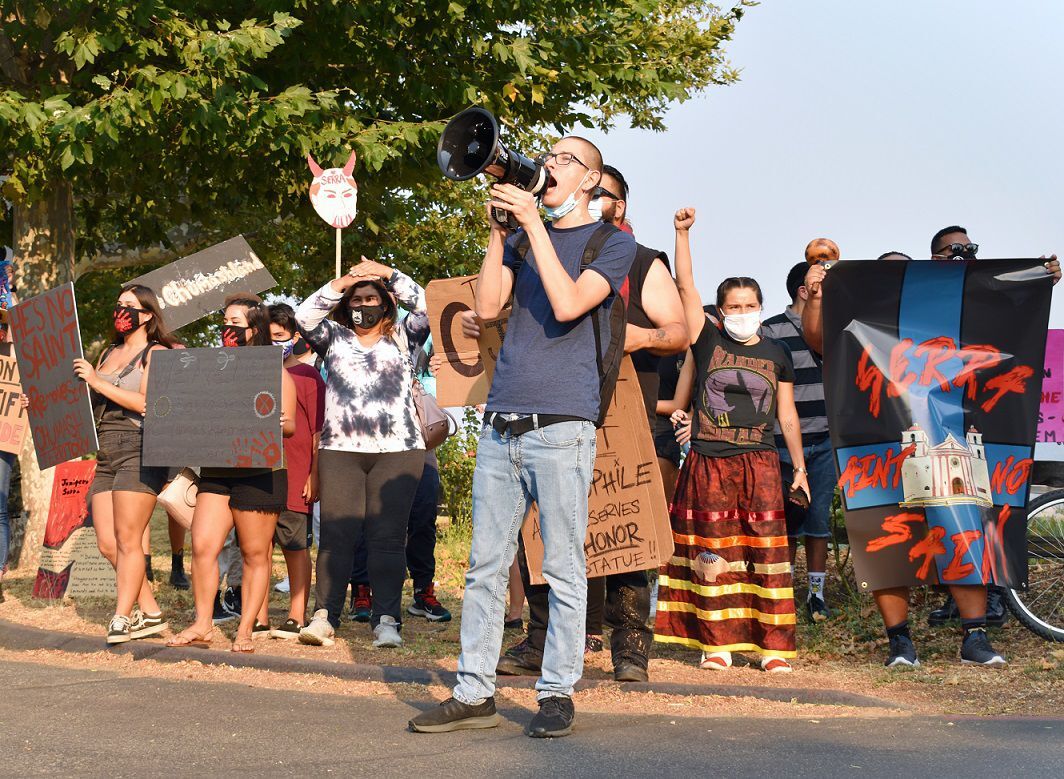 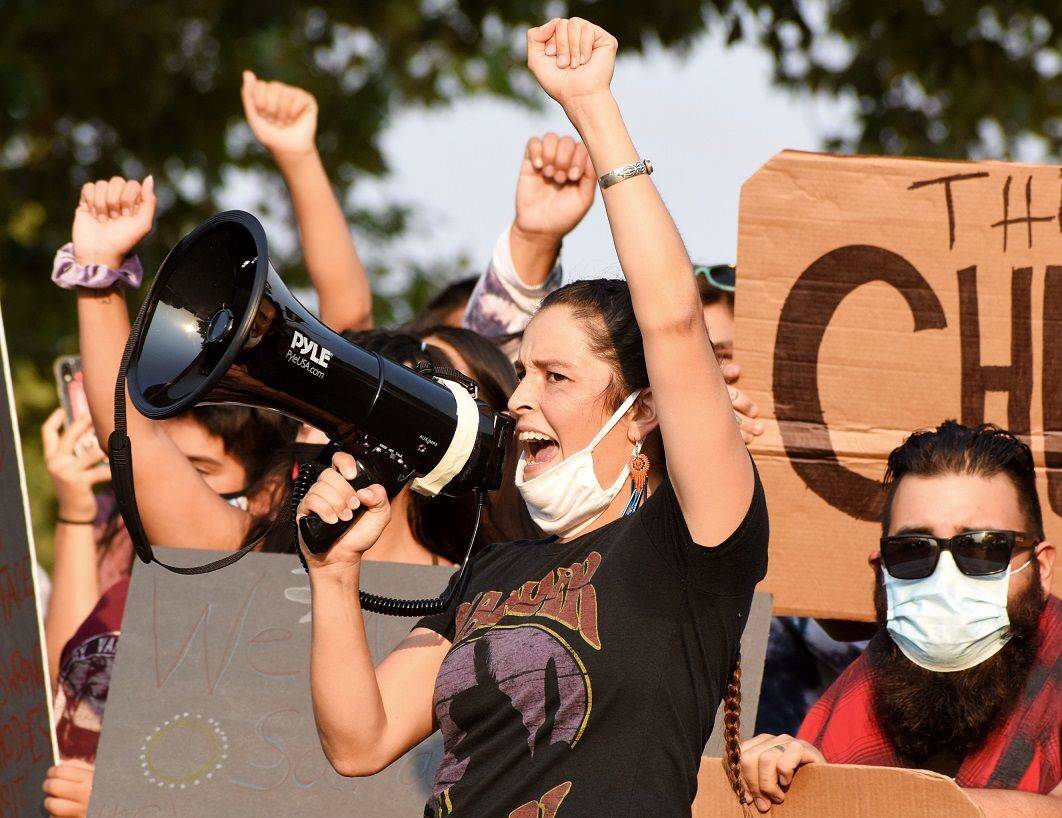 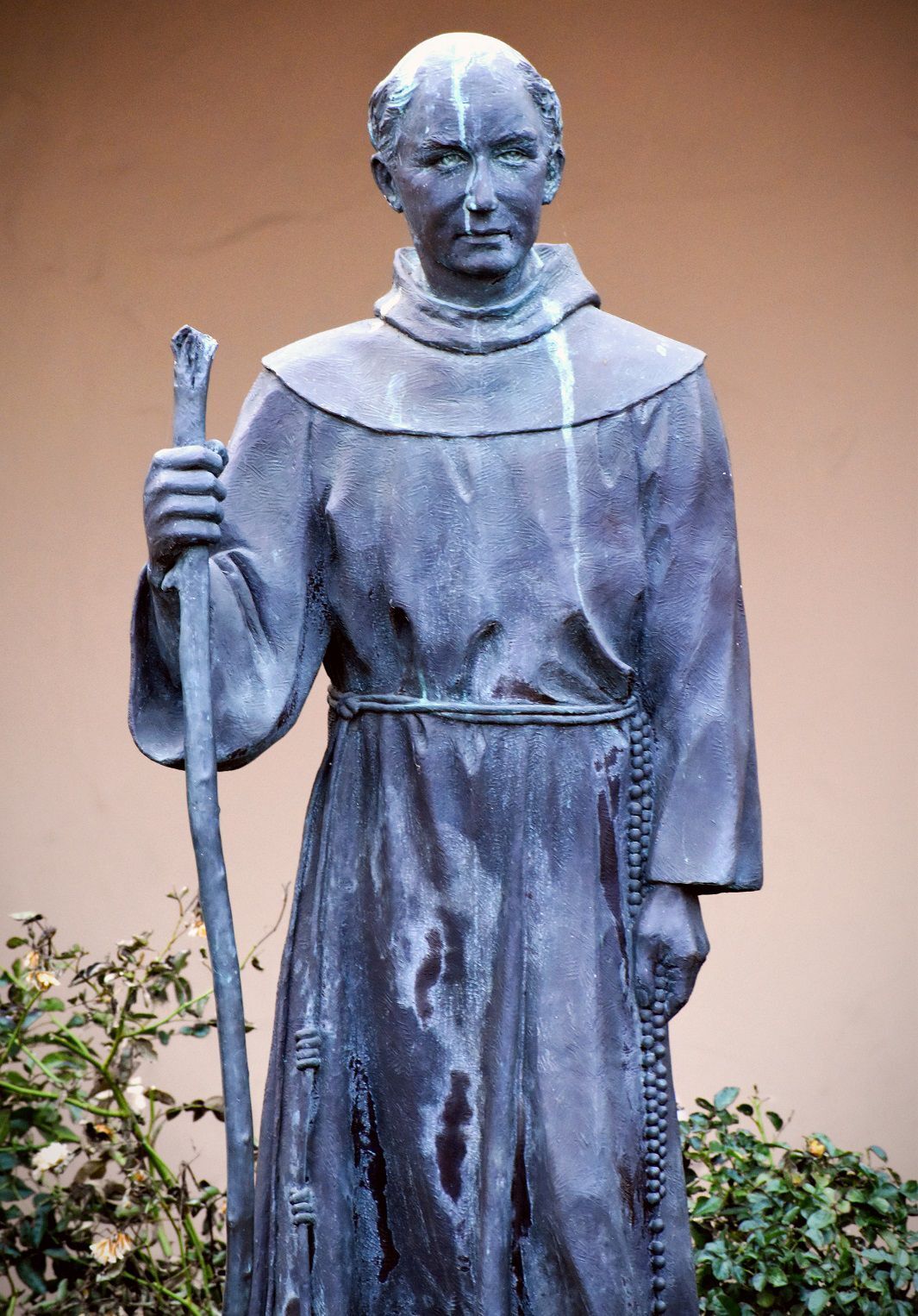 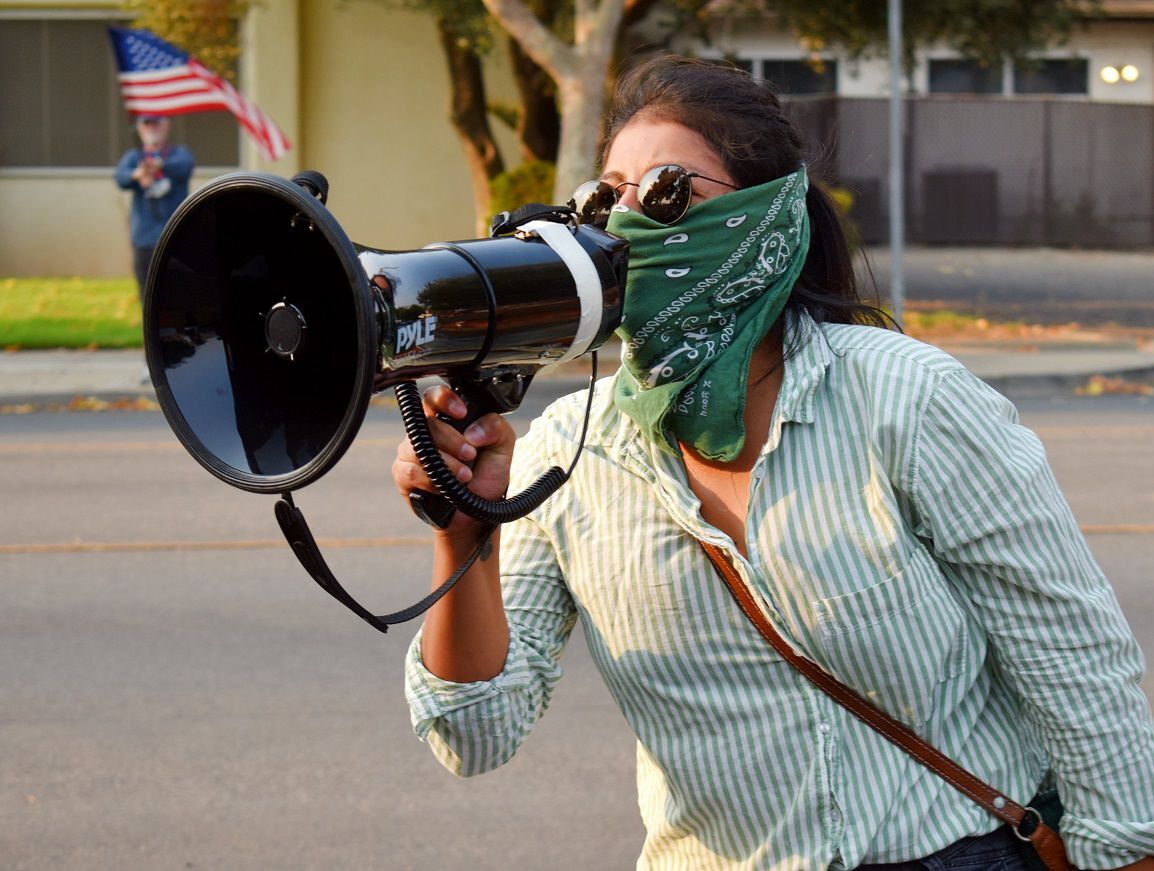 A protester stands in front of Mission Santa Inés demanding the removal of the Father Junipero Serra statue in Solvang on Saturday evening. 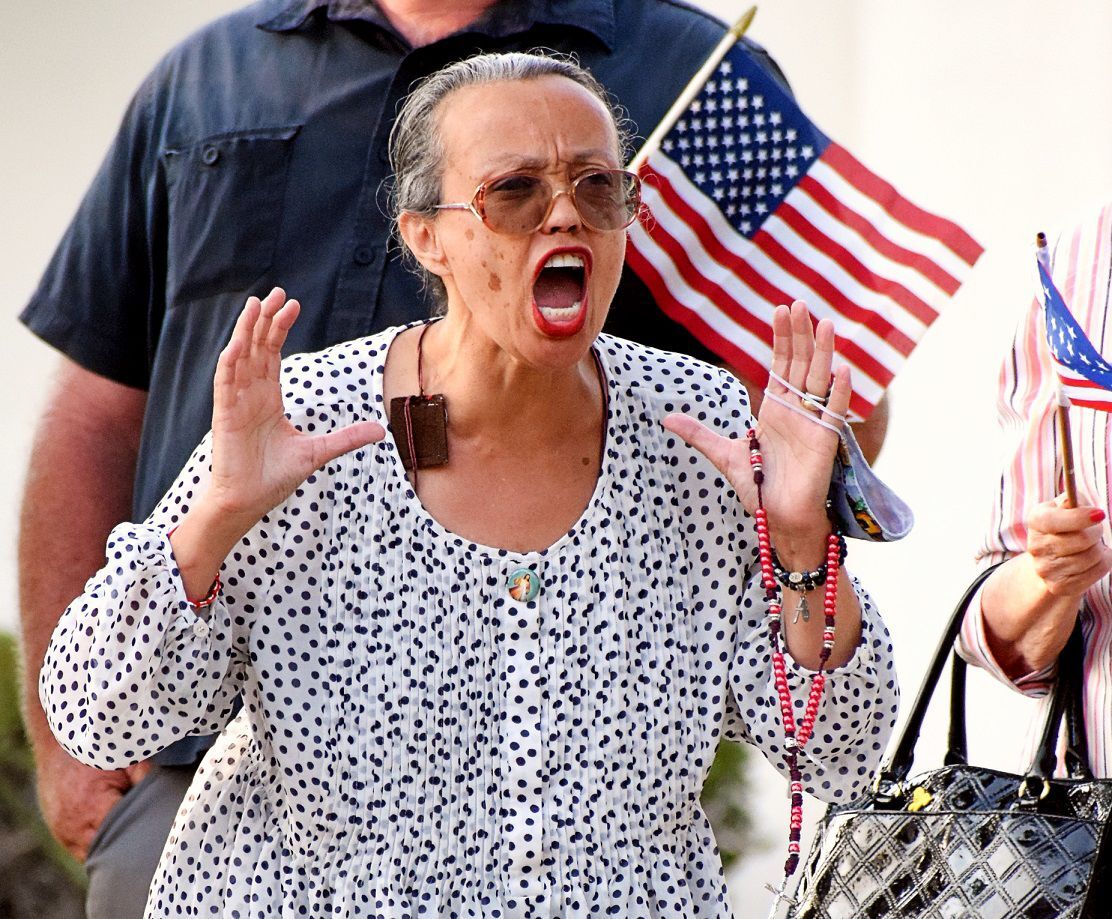 Standing on the other side of Mission Drive, a counter-protester responds to Father Junipero Serra statue protesters gathered in front of Mission Santa Inés on Saturday evening. 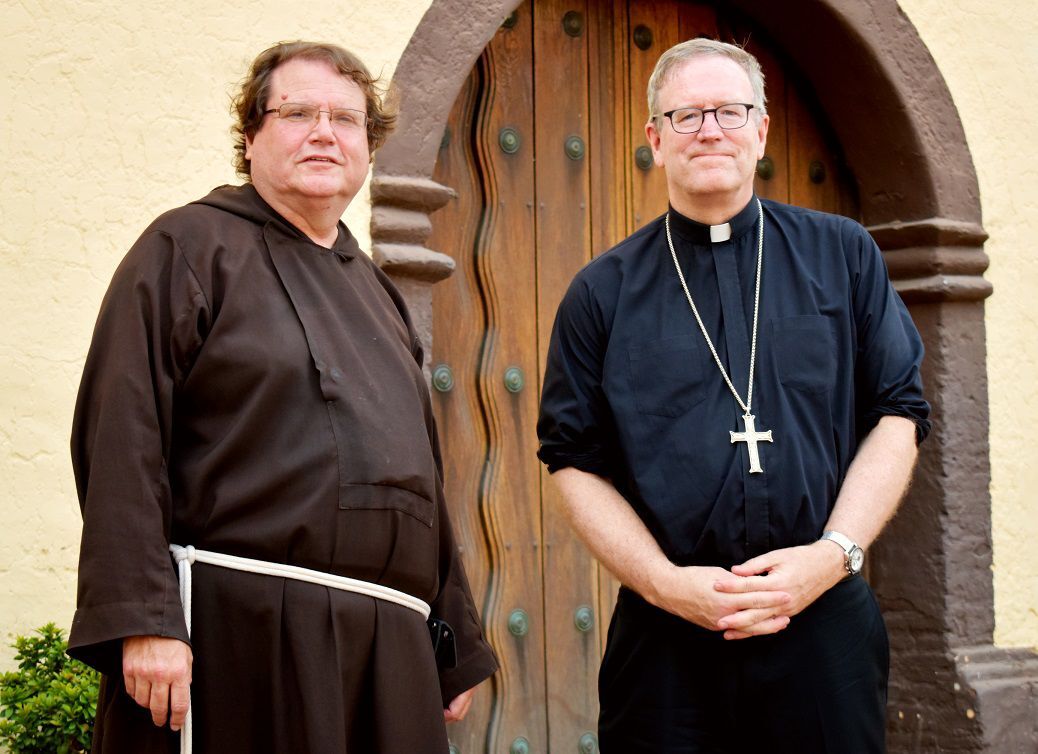 Friar Robert Barbato, left, and Bishop Robert Barron stand unified at the church while protesters gather outside Mission of Santa Inés demanding the removal of the Father Junipero Serra statue.

A cacophony of chanting, shouting, singing and motorcycles revving their engines echoed through Mission Santa Inés on Saturday evening as protesters' calls for removal of the church's controversial Saint Junipero Serra statue were met with loud opposition.

Two dozen protesters marched from Solvang Park up Mission Drive toward the front entrance of the mission, bearing oversized signage reading, "This is Chumash Land" and "Serra Ain't No Saint," while shouting "Take it down! Take it down," referencing the mission's life-sized bronze statue of Serra, an 18th century Roman Catholic Spanish priest and friar who is accused of mistreating Native Americans in his care.

Black Lives Matter activist Maurissa Vigil, 26, donning a face covering and holding a sign, said despite having launched a petition in July appealing to the city and church to remove the statue, and gathering over 1,000 signatures before it was determined that the city of Solvang had no jurisdiction over the matter, the group's attempts to communicate with mission pastor Father Bobby Barbato have gone unanswered.

"We have emailed him and called," Vigil said, standing with her group stopped outside of the mission. "It's still pretty early on in the campaign and we're just going to continue with this. We want to make sure [Father] Bobby has an accurate understanding of why [the statue] is so upsetting and why we would like it to be removed even though it is on private property. It's a significant part of the city."

Vigil said there was never an intent to physically remove the statue during the protest, despite rumors to the contrary.

"The first time I heard someone say that was on Facebook," Vigil said. "There was a post going around trying to rally support against us, mentioning that we were going to tear it down. We've been working on the protest for at least a month, and intended for everything to be just that."

A small group of counter-protesters lining the opposite side of Mission Drive flew large American flags and shouted, "USA! USA," demanding protesters  tell the truth about the history of Serra.

One counter-protester who would only identify herself as Diane, said her group was there in support of America and the Serra statue. She explained that fellow counter-protesters who were not so visible were ready to step in at any moment if the protest turned sideways.

Joining the counter-protesters, Mission Santa Inés parishioner Jan Butler said that although one lady had yelled "Liar! Liar!" at protesters, it wasn't how others in her group felt. Rather, she encouraged those protesting the statue to conduct more historical research.

"I firmly believe that the majority of people do not want to see this kind of dissension at all," said Butler. "They really want to see people come together — I know I do."

A group of church parishioners standing guard at the mission's main entrance marked with bright orange cones and "No Trespassing" signs that warned violators of intended prosecution, were accompanied by 10 "Knights on Bikes," a Southern California Catholic biker group tied to the Knights of Columbus. They revved their Harley-Davidsons in unison to drown out protester chants.

Riverside Knights on Bikes member David Sanchez, sporting a black leather vest with religious and patriotic patches, said he supports peaceful protest and his own right to also peacefully protest.

"Praying and chanting, that's wonderful, but when they start calling the Catholic church the devil and Hitler — I just didn't like hearing it. I didn't think it was appropriate," Sanchez said. "So we have a right to counter-protest. We are in for the service of the church."

Catholic musical group Shofar Christiano from Los Angeles stood firm at the mission entrance with parishioners and produced loud bellowing sounds from their trumpet-like instruments made from hollowed-out rams' horns, a practice that is said to be of ceremonial importance dating back to biblical times.

In response to the increased noise volume, protester Railyn Jenae took the bullhorn and led protesters, largely comprised of Chumash descendants, in louder cries to remove the Serra statue.

A father holding his toddler who declined to be named, said he joined the protest in support of the cause — and future generations.

Fifty yards away, on mission property, a group of 20 friars from San Lorenzo Seminary dressed in brown robes, sang hymns and recited prayers as the mission bells rang out in vigil.

The visiting regional bishop of Santa Barbara and Ventura counties, Bishop Robert Barron, who had earlier led a prayer service and Mass at the mission attended by hundreds of parishioners in response to the planned protest, instructed the group of friars to safely remain on church grounds.

"We heard there was some plan for a demonstration, and that they wanted to remove the statue," Barron said. "They have no business removing a statue from our own property — so we thought we should take a stand, and the stand should be obviously a nonviolent one. No one is interested in a confrontation."

Barbato, who attended the protest Saturday, explained that all access points to Mission Santa Inés had been closed for the day due to the anticipated escalation of the protest by pro-Serra counter-protesters, who had reportedly threatened to take matters into their own hands.

"It's too volatile now, I don't think they want dialogue at this time," Barbato said. "What we're trying to do is pray, and be grateful for what we have. This kind of stuff scares me because it's all over our society."

Addressing the outcry, Barbato agreed that the 18th century was less than perfect, riddled with "problems and struggles."

"I mean, I have a problem with any country going in and colonizing another, but look at human history," Barbato said. "It's a sad reality. If I were back then and could make the decision, I would say, 'No, don't do that, that's other people's lands.'"

He added that although Serra doesn't necessarily need a statue to prove his sainthood, moving the statue is an act beyond his control. Barbato said, however, that he's open to a conversation about it under different circumstances.

"I always have this delusion that people can just sit down and have a quiet talk. But I'm not willing to move [the statue] because they're telling me all these horrible things," Barbato said. "If I say, 'OK,' then what's next? I do feel it's the principle that we have to defend, our freedom of faith. What if someone doesn't like the cross? Are they going to tell us to take that down, too?"

The Solvang Trolley & Carriage Company has catered to thousands of Solvang tourists since 1973.

Solvang City Council members made good on their campaign promise to bring change to Solvang leadership Monday when they voted unanimously to establish the Branding and Design Committee and appointed its first five members.

The Santa Ynez Band of Chumash Indians is seeking to recover $175,000 in property taxes it overpaid to Santa Barbara County originating from an erroneous 2015 assessment of its Camp 4 property, according to a lawsuit filed in Superior Court in October 2018, which has now gone to trial. 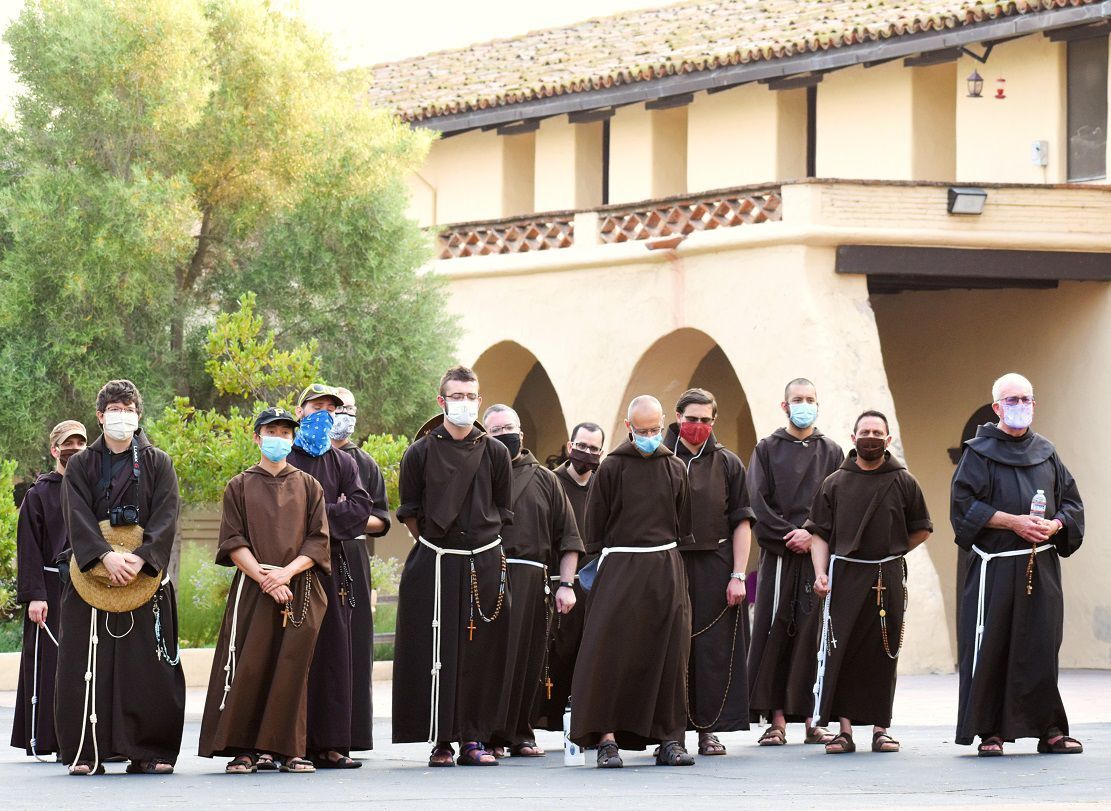 Clergymen of the Santa Inés Mission sing and pray outside of the church during the protest Saturday evening.

A protester stands in front of Mission Santa Inés demanding the removal of the Father Junipero Serra statue in Solvang on Saturday evening. 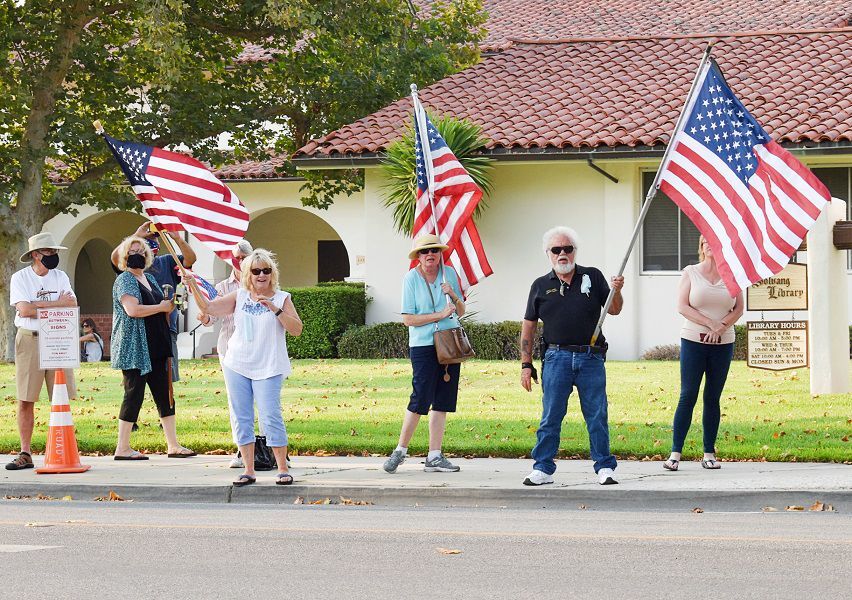 A group of counter-protesters in support of Mission Santa Inés's patron statue stands across the street in front of the library on Saturday evening.

Standing on the other side of Mission Drive, a counter-protester responds to Father Junipero Serra statue protesters gathered in front of Mission Santa Inés on Saturday evening.

Friar Robert Barbato, left, and Bishop Robert Barron stand unified at the church while protesters gather outside Mission of Santa Inés demanding the removal of the Father Junipero Serra statue.