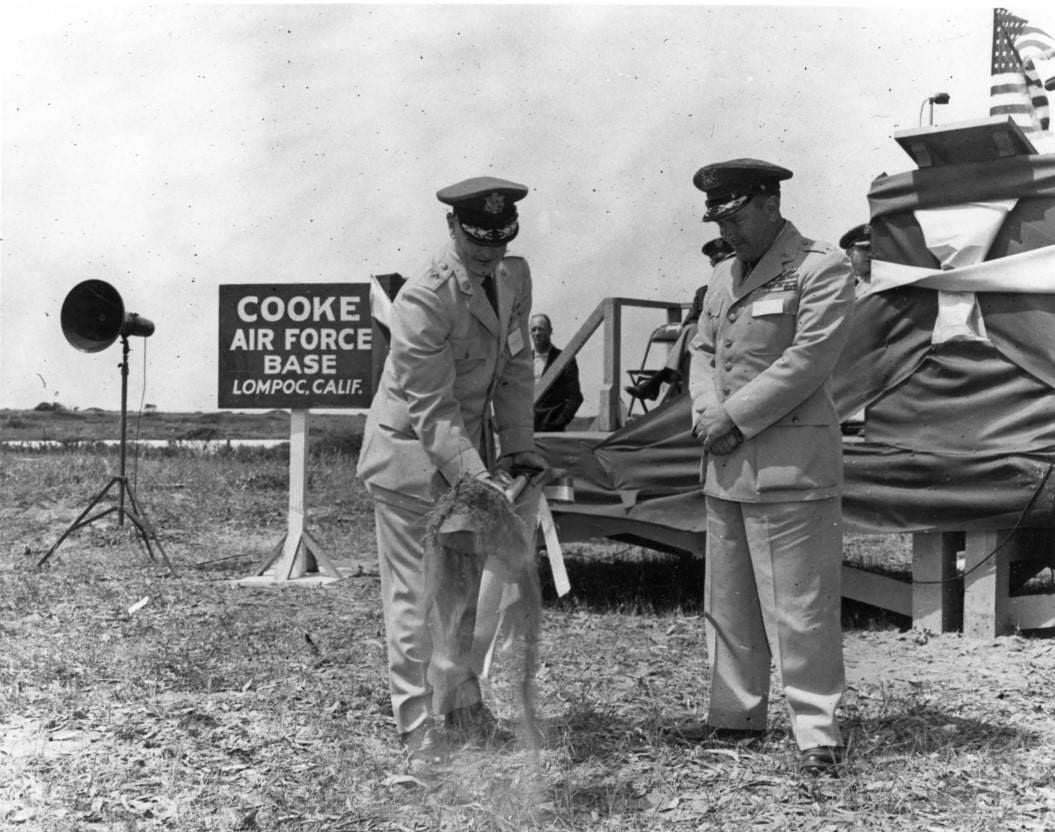 Officials break ground at the U.S. Army's Camp Cooke during the transition to Vandenberg Air Force Base. 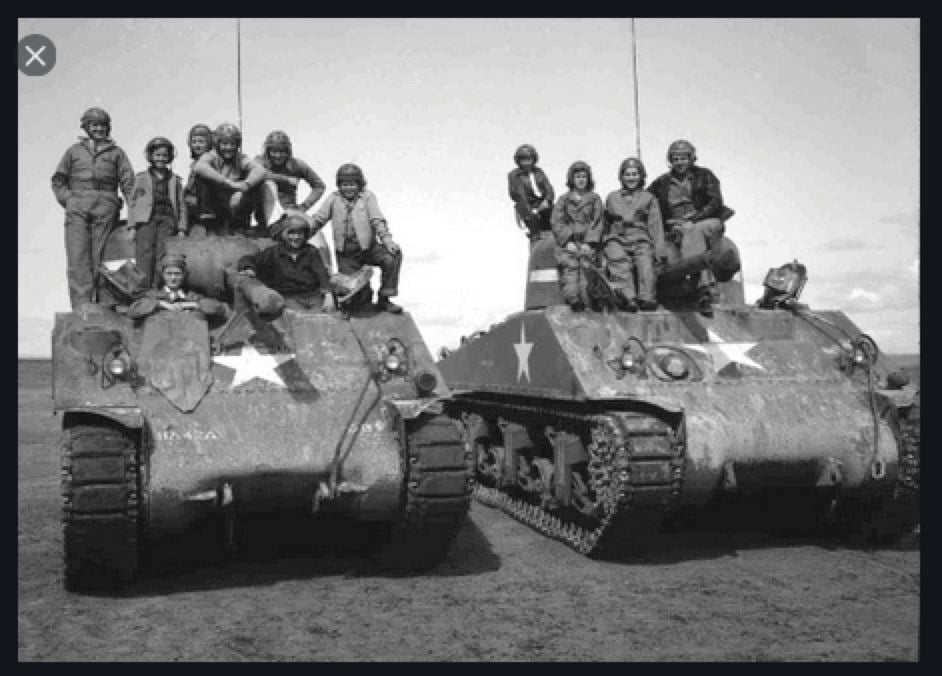 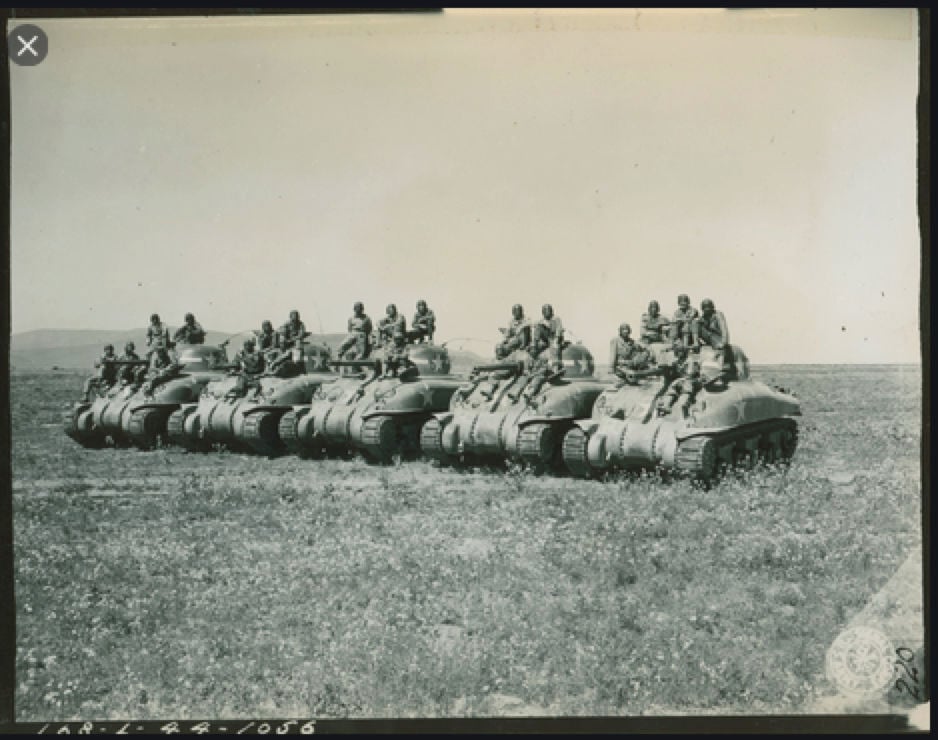 Five Sherman tanks line up at Camp Cooke, circa 1944. 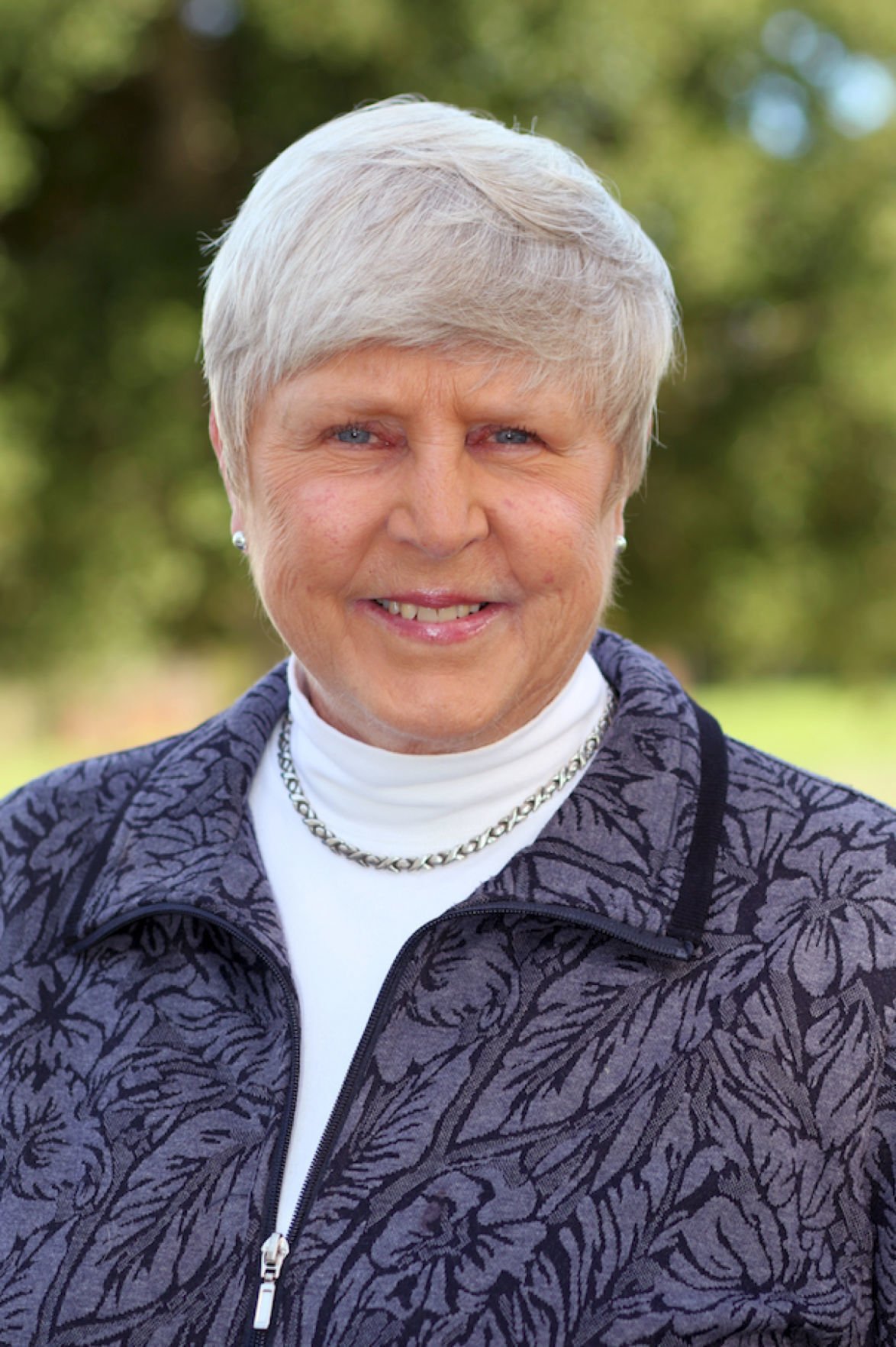 Since Vandenberg Air Force Base has been in the news as a site for the U.S. Space Force, a neighbor who is new to the area asked if I would write about its origin.

The present base is much more than just a military establishment; it encompasses over 90,000 acres and contains some of the highest quality habitat remaining in central California.

It has many valuable cultural and ecological treasures that the government is responsible for protecting and preserving.

During World War II, the United States realized it needed to increase its capability to develop and train with armored tanks and infantry forces. The Army looked for a suitable location to build a new base that was remote from populated areas yet easily accessible.

The triangle between Lompoc, Guadalupe and Santa Maria was perfect.

If you wish to learn more about the history Camp Cooke and Vandenberg Air Force Base, the following books are recommended:

Construction of the base began in September 1941 and was named Camp Cooke in honor of Maj. Gen. Philip St. George Cooke, a cavalry officer whose military career spanned 50 years. Cooke had graduated from West Point in 1827 and retired in 1873, having fought in the Mexican War, the Indian Wars and the Civil War.

In 1941, Camp Cooke became home to the 5th Armored Division; and the steady roar of its tanks and artillery became a daily occurrence. In addition to the 5th Division, the 6th, 11th, 13th and 20th Armored Divisions, as well as the 86th and 97th Infantry Divisions trained at Camp Cooke before deploying oversees. Anti-aircraft, combat engineer, ordnance and hospital units also trained at Camp Cooke.

As Col. Anthony Mastalir, commander of the 30th Space Wing, looked ahead to the future of Vandenberg Air Force Base, he expressed a great deal…

During World War II, over 400 separate and distinct outfits trained at Camp Cooke.

A little known fact is that Camp Cooke became a prisoner of war camp for German and Italian captives. The first group of 587 prisoners arrived on June 16, 1944.

Under the Geneva Conventions, the prisoners had to be housed and fed in equivalent conditions as their captors. Prisoners could not be used for defense-associated work. The prisoners worked as laborers, kitchen and laundry workers and groundskeepers. They were paid 80 cents per day and could buy items at the PX.

As the prisoner population grew, Camp Cooke established 16 branch prisoner camps, some as far as 200 miles away. The reason they were so spread out is that the prisoners were needed to plant and harvest crops as well as do road work away from the base due to the wartime labor shortage.

The prisoners’ work helped pay the cost of housing them and helped the surrounding farm communities. The program closed in June 1946 and the prisoners were returned to their respective countries.

The prison program was transferred to the U.S. Bureau of Prisons to house civilian offenders in August 1959. Today, it is known as the United States Penitentiary at Lompoc.

World War II programs ended at Camp Cooke in June 1946 and the base closed. It was leased to local farmers for agriculture and grazing.

However, the Army opened the base again from August 1950 to February 1953 to train units for combat in Korea. The 40th Infantry Division of the National Guard also trained at Camp Cooke during this time and was deployed to Japan and, later, Korea. The base was once again inactivated on Feb. 1, 1953.

Four years later, the military would return to Camp Cooke. This time, the Air Force was here to stay.

The driving force for the U.S. to have a missile launch facility on the West Coast began with a need to match and overcome Russia’s space launch capabilities.

Russia launched the first manmade satellite, sputnik, into orbit on Oct. 4, 1957. The space race between the Soviet Union and the United States was on.

The secretary of defense directed the transfer of Camp Cooke from the Army to the Air Force to use as a missile training base. The remote location and proximity to the coast offered a perfect setting for safely launching intermediate range ballistic missiles (IRBMs) and intercontinental ballistic missiles (ICBMs). This same location was also ideal for launching satellites into polar orbit without having to fly over any populated areas during liftoff.

At first, the base was called Cooke A.F.B., but on Oct. 4, 1958, it was renamed Vandenberg A.F.B. in honor of the late General Hoyt S. Vandenberg, the second chief of staff of the U.S. Air Force.

The first missile launch from Vandenberg A.F.B. was a Thor IRBM launched on Dec. 16, 1958.

On Feb. 28, 1959, the first two-stage Thor/Gena missile lifted off, carrying the world’s first polar earth orbiting satellite named Discover I. It could send pictures back to Earth.

As the importance of Vandenberg grew, the Navy transferred the 20,000-acre Point Arguello Launch Complex to the Air Force and a network of instrumentation sites were constructed along the California coast and downrange on islands throughout the Pacific to support ballistic, space and aeronautical operations.

On Nov. 19, 1991, the Western Space and Missile Center, which had been operating Vandenberg, was renamed the 30th Space Wing.

Since the space race began, there have been over 2,000 launches from Vandenberg. It has grown to 99,578 acres, has a 2.84-mile runway, is the third-largest Air Force base in the U.S., has 465 different facilities and performs approximately 7,000 range operations per year.

The base has over 3,000 military members, 1,200 government civilians and 3,000 contractors. Overall, it is estimated that Vandenberg’s annual economic impact to our area is over $2 billion and provides 8,700 jobs and accounts for over 7% of all economic output within the county.

This new Space Force opens the way for Vandenberg to become a spaceport that can launch not only military missiles and satellites but private and commercial projects, as well.

If this happens, it will be a huge economic boon to our area as additional high-tech companies will be moving in along with their employees. The Vandenberg economic impact of the 1960s may be happening again, and that will be good for the region.

Stay tuned, exciting times are ahead for Vandenberg and the North County.

Chief Master Sgt. JoAnne S. Bass formally took the reins Aug. 14 as the Air Force’s 19th Chief Master Sergeant, in the process becoming the first woman and the first person of Asian American descent to be elevated to the service’s highest-ranking enlisted officer.

Daughters of the American Revolution chapter members along with representatives from the Santa Ynez Valley’s Veterans of Foreign Wars Post 7139 gathered at Jim Kunkle’s SYV Airport hangar to honor and thank seven veterans.

I have been out to the islands on whale watching, kayaking, and hiking trips, but what did I really know about the Santa Barbara Channel itself and the history of the islands? How were they formed? What unique plants and animals live in the Channel and on the islands?

Over a million people a year visit Catalina Island and spend $166.7 million to do everything from enjoying the beautiful scenery to playing golf, hiking, biking, fishing scuba diving, kayaking, shopping and visiting the many museums. Learn more about Catalina right here.

Officials break ground at the U.S. Army's Camp Cooke during the transition to Vandenberg Air Force Base.

Five Sherman tanks line up at Camp Cooke, circa 1944.