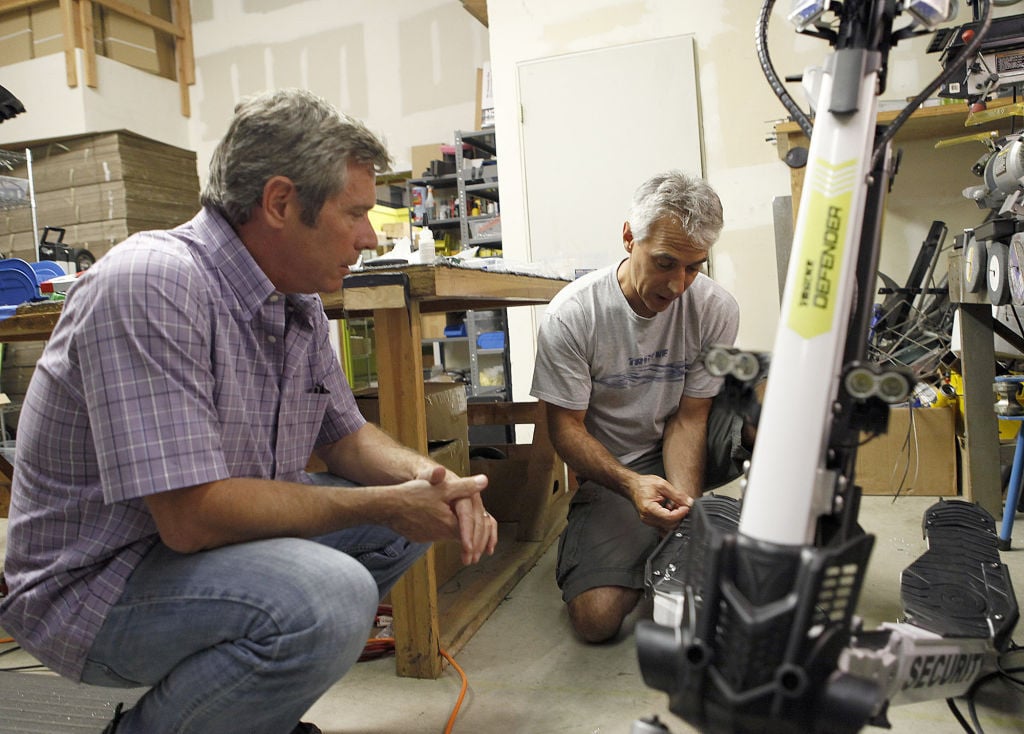 Co-owner of Trikke John Simpson, from left, and chairman and chief designer Gildo Beleski work on Trikke's Defender, a Trikke designed for security personal, at the Trikke headquarters in Buellton. 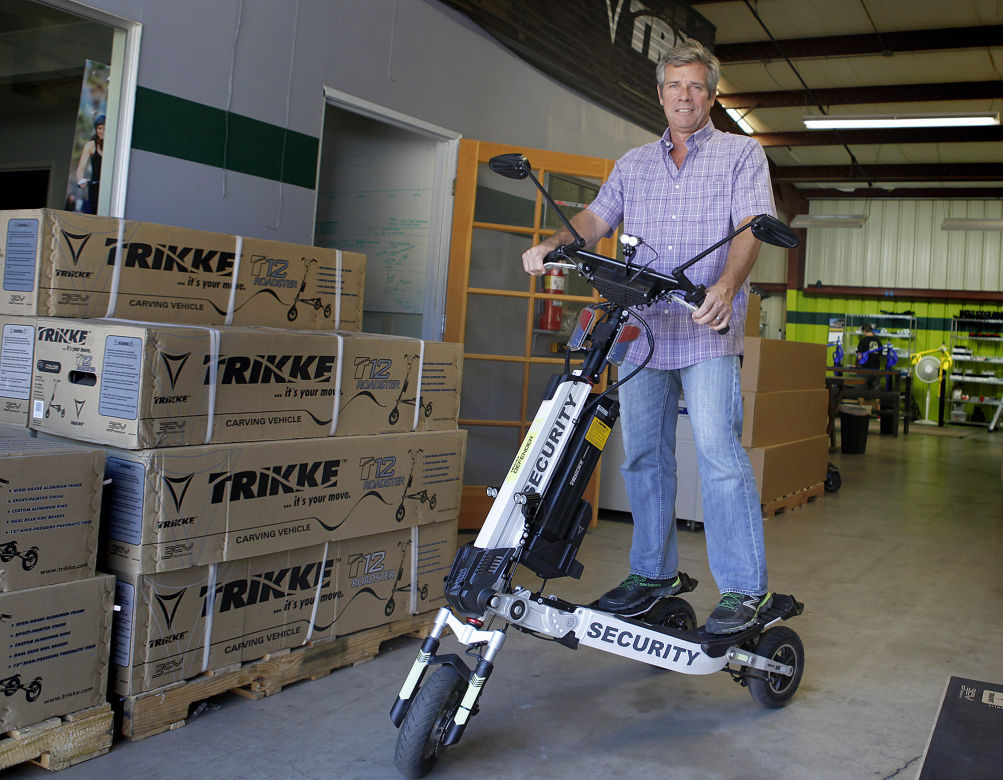 Co owner of Trikke John Simpson at the Trikke headquarters in Buelton. 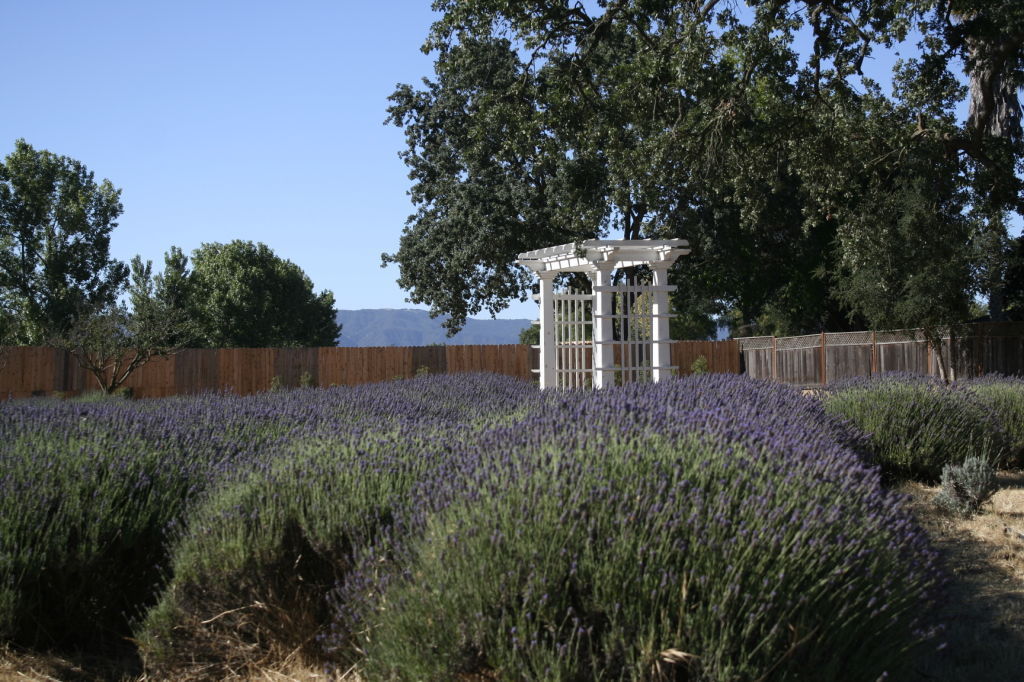 You've heard the expression Made in America, but did you know that a growing number of local businesses are making their unique products right here for distribution to consumers far outside the Santa Ynez Valley?

Trikke manufactures three-point cambering or "carving" vehicles for fun, fitness, transportation, and now, even police and security forces. Founder Gildo Beleski, who functions as the chairman and chief designer, is partnered in the business with John Simpson, who fills the president and CEO roles at their Buellton-based company.

They manufacture about 100 of the body-propelled and electric vehicles a month at their 5,000 square foot Buellton design and assembly facility on Industrial Way, with additional office space on Avenue of Flags.

"Eighty percent of everything that goes into these vehicles, from design and development to assembly and shipping, happens right here," said Beleski.

Case in point is Trikke's latest model, the Defender. "This baby was born right here. It is the newest, most exciting thing we've ever worked on," said Simpson, showing off the Defender prototype for the first time to someone from outside the company. "A cop will look at this and say, 'yes I want that, that's bad a**'," he laughed.

Simpson is taking the vehicle, capable of going 21 mph and thought to be ideal for police or private security forces patrolling areas like the Santa Barbara waterfront and downtown streets, to the CopsWest trade show in Long Beach on Monday.

The Defender is Trikke's highest-end entry into the niche police/security market. The majority of their vehicles, whether body-propelled or electric, are sold to outdoor enthusiasts through retailers, including Target.com for their entry level manual model, and via their website.

The business has been in Buellton since 2005, has 10 employees, and the partners can't imagine being anywhere else. "We're so far, so good, in finding great workers here," said Simpson.

There's nothing high tech about Clairmont Farms. The company has been selling products made from lavender grown in their Los Olivos fields since 1998.

"Body butter, linen water and essential oil are the most popular items," said Sean Crowder, who co-owns the business with his mother, Meryl Tanz. "We have four and a half acres planted and producing, and just planted another acre and a half."

Clairmont Farms lavender products are a favorite at the Lavender Inn by the Sea and the Salt Cave in Santa Barbara. "We have several message therapists in Los Angeles who use our oil as well," said Crowder.

Known for its fine food and wine, you don't have to be in the Valley to enjoy its signature bread dipping oil. The oil is one of several gourmet products sold at the restaurant — the others include olive tapenade and muffaletta — and is available on the shelves of high end gourmet shops from San Luis Obispo to Westlake Village. The oil contains a mix of herbs and garlic, and can also be used as a marinade for roast chicken.

Never was "necessity is the mother of invention" more true than in the formation of Karen and Steve Cottingham's business. Steve was a deputy probation officer assigned to the Los Prietos Boys' Camp on Paradise Road, and frequently came home with extreme cases of poison ivy and poison oak.

"We had more than one trip to the ER to get Steve a steroid shot," Karen said. "On one of them, the doctor mentioned that mugwart can be effective in dealing with itchy skin. Out of desperation, I went out, picked it and made a rub with olive oil. On his next episode, Steve used it in the shower, and it worked. But it was a real mess."

Karen decided a soap made with mugwart might be the way to go, and went to a crafts store where she purchased a child's soap-making kit.

"I made my first batch using cupcake tins," she recalled. Fortunately, she has a brother who is a chemist, and he offered further suggestions.  "I just kept refining it and refining it," she said.

Many of Steve's coworkers and friends, some of whom are on hotshot fire crews, heard about his wife's creation, and came to their door asking if she'd make some for them.

"That's when we decided to sell it commercially," Karen said. "We made our own labels, and Steve starting taking it around."

It didn't take long for word to spread. The Cottingham's Paradise Road Soap is now purchased by the Texas Rangers, and numerous divisions of the U.S. Forest Service, Bureau of Land Management and the National Park Service. It's sold in over 45 stores along the Central Coast, at regional Whole Foods locations, and is a must-have item in the backpacks of hikers, mountain bikers and farm workers around the country.

There’s no shortage of good restaurants in Solvang and the several small towns around it, nor great tasting rooms. Judging by the growth of Los Olivos alone, over two dozen wine tasting rooms there offer excellent Santa Barbara County grown wines.

Despite being out of the competition world for 50 years, Pat Roberts, wife of Monty Roberts, buckled down and achieved an amazing 2019 competing record with “Blackie”, a horse with multigenerational value.

Jane Ann Garey of Santa Ynez passed away peacefully, with her husband at her side, on the fourteenth of January, 2020 in Solvang, after a long…

CAPA Pet of the Week: Blue

Blue is a 2-year-old male, blue weimaraner available for adoption at Animal Services – Lompoc. This handsome boy is an owner surrender who has…

Los Alamos sets up for the 14th annual Mushroom Festival, slated for the weekend of Friday, Jan. 24 through Sunday, Jan. 26.

Dale Richard Molesworth passed away the morning of December 16th, 2019, bringing to a close the 63-year love story of our parents. He was born…

Pamela was born in Kansas to Kathrine and Landon Stableford and is survived by her older brother, Lanny.

Co-owner of Trikke John Simpson, from left, and chairman and chief designer Gildo Beleski work on Trikke's Defender, a Trikke designed for security personal, at the Trikke headquarters in Buellton.

Co owner of Trikke John Simpson at the Trikke headquarters in Buelton.