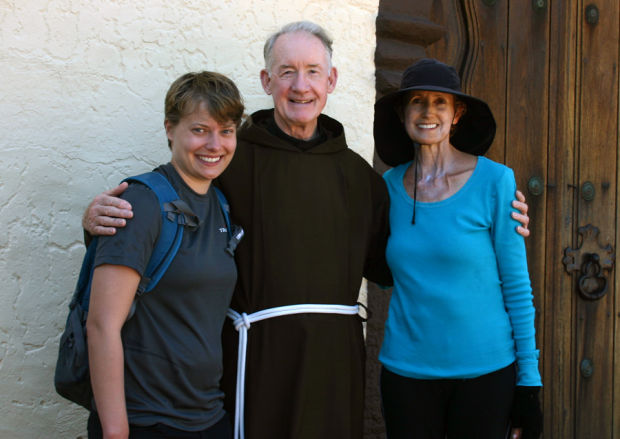 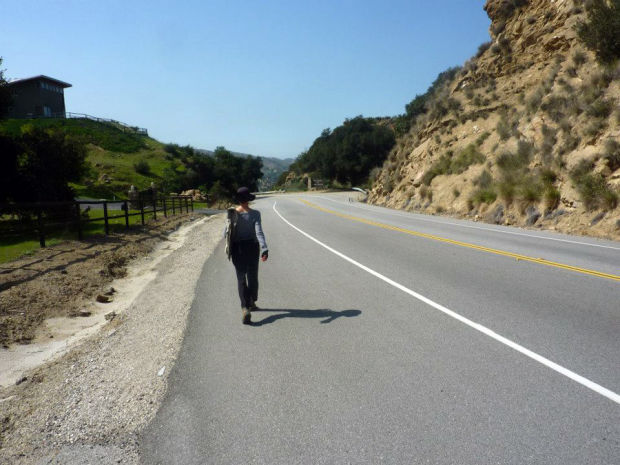 Edie Littlefield Sundby on her Mission Walk through California.

Many cancer survivors participate in local 5k and 10k walks, but Edie Littlefield Sundby has a bigger mission — to walk from San Diego to Sonoma visiting the 21 California Missions.

Along the approximately 500 miles following the El Camino Real, she intends to stop at each Mission, lighting a candle of thanksgiving.

“I just want to inspire people not to give up — to get up and walk and defeat this demonic enemy,” said the 61-year-old Sundby.

The San Diego resident was diagnosed in 2007 with stage 4 gastrointestinal cancer that was eventually determined to be late-stage gallbladder cancer. She had as many as 50 fast-growing tumors, in her gallbladder, liver, colon, bowel and lungs. One tumor appeared to be 7 inches long.

“It is a deadly and demonic form of the disease, spreading and wreaking havoc with few symptoms until the cancer cells have taken control,” Sundby wrote in a online blog for the New York Times.

A prognosis she had just three months to live didn’t faze Sundby, her husband or four daughters.

“There was no time to waste. And no second chances,” she wrote, adding they knew that getting the right doctor would extend her life.

She found Dr. George Fisher, head of clinical trials at Stanford Cancer Center, who promised to treat her even if he couldn’t cure Sundby’s cancer.

Over the first four and a half years, Sundby underwent 65 cancer treatments and has taken more than 500,000 milligrams of chemotherapy drugs. She has since had several setbacks, two surgeries removing portions of her liver and lung and remains tethered to the chemo, but she is determined not to give up.

Inspired by her friend Ron Briery, who wrote an online guide “California Mission Walk,” Sundby decided to make a Mission walk of her own. She was accompanied on the first 320 miles by Briery, his wife Sandy and her friend Deb Dawley who drives a camper, which accommodates them at the end of each day’s walk at a campsite.

“I started on a rainy Wednesday, Feb. 20 and I have walked every day, except one,” Sundby said. “I average around 15 miles a day and I expect to complete my journey by the end of April. “

Leaving the Brierys in Santa Barbara, she was then joined by one of her identical twin daughters, Whitney Sundby and her husband Dale, who will walk with her for the eight days.

“I have watched my mother’s battle with cancer for the past six years. I just want to be a part of my mom’s spiritual journey,” Whitney said. “That’s why I’m here.”

“Edie has such a life urge,” Dale added. “I have never found anyone with as strong a will to live — never.”

Spending the night at Cachuma Lake, her next stop was Old Mission Santa Inés.

“It was 19.6 miles up Highway 154 to Cachuma Lake,” said Sundby on her arrival at Old Mission Santa Inés on Tuesday, March 12. “It was a bit dangerous as there are no sidewalks and the highway is narrow and winding — but it’s so beautiful.”

Sundby was greeted warmly in Solvang by Father Gerald Barron, pastor of the Mission, who bestowed a blessing upon her, and Sheila Benedict, who gave the group a tour of the Mission. Sundby and family then stayed the night in Buellton, resting up for the next day’s journey to La Purisima Mission in Lompoc.

At La Purisima, she rang the bell before continuing her walk over Harris Grade and into the Santa Maria Valley.

Sundby is now technically in remission — despite the fact that her doctor said an advanced gallbladder cancer patient’s chance of surviving is “well under 5 percent.”

“I attribute my mother’s survival to her constant and incredible mental strength and her spirituality,” Whitney said.

“I’m very blessed,” Sundby said. “There are so many people who are suffering with cancer that can’t even walk, nevermind walk 500 miles. My body is functioning, I am truly blessed and thankful.”

At home, she continues to hike daily and do yoga, which she has been practicing for 25 years, and fight the good fight.

“With the help of God, family, friends, doctors, nurses, and legions of angels I have made it through 6 years of late stage cancer,” she wrote on Facebook. “I feel enormous joy and gratitude to be alive.”

To read more about Sundby, visit www.facebook.com/#!/EdiesMissionWalk or Edies Band of Angels.

Dear Abby: Newlywed is questioned about keeping her name

DEAR ABBY: I'm in my mid-30s and have just been married for the first time. I chose not to take my husband's last name for several reasons. I have a child from a previous relationship who shares my name; I have a unique name that I love; and I am established in a career in which name recognition is important. I am also an older bride. Unfortunately, I didn't discuss it with my husband before the wedding, although I did explain my reasoning later.

Robert George “Bob” Petersen, 91, a lifelong resident of Solvang, passed away peacefully at his home on April 30, 2020, with his family by his side

Suzan Hamilton-Todd's five-week European adventure was canceled due to travel restrictions put in place during the coronavirus pandemic.

South on 101: As Santa Barbara slowly reopens, reflections on the 1918 Spanish flu pandemic

SOUTH ON 101 Last weekend, Santa Barbara’s State Street reopened as a car-free promenade. Some businesses opened their doors, and restaurants were allowed to serve outdoors. However, face masks are required inside or while in line to enter a business, and by all workers.

'I've got your back': Buellton solidarity march draws hundreds of peaceful protesters

Knelt to the ground with heads hanging in silence, approximately 200 peaceful protesters on Thursday afternoon remained still for 8 minutes and 46 seconds.

DEAR ABBY: When I was younger, I was engaged to a man I'll call "Jake." I was deeply in love with him, only to have my heart broken when he cheated on me, so I broke it off. A short time later, I developed feelings for his brother, "Jed." One thing led to another, and Jed and I are engaged to be married in two months.

I’m angry, because, like Greta Thunberg, I feel we must be making better decisions to try to slow down this disease until a vaccine is developed.

Ask the Doctors: Pediatric syndrome may be linked to coronavirus

Dear Doctors: What can you tell me about Kawasaki disease? I read that children who had COVID-19 are getting it. But I thought children were supposedly safe from the virus. Why has that changed?

Edie Littlefield Sundby on her Mission Walk through California.