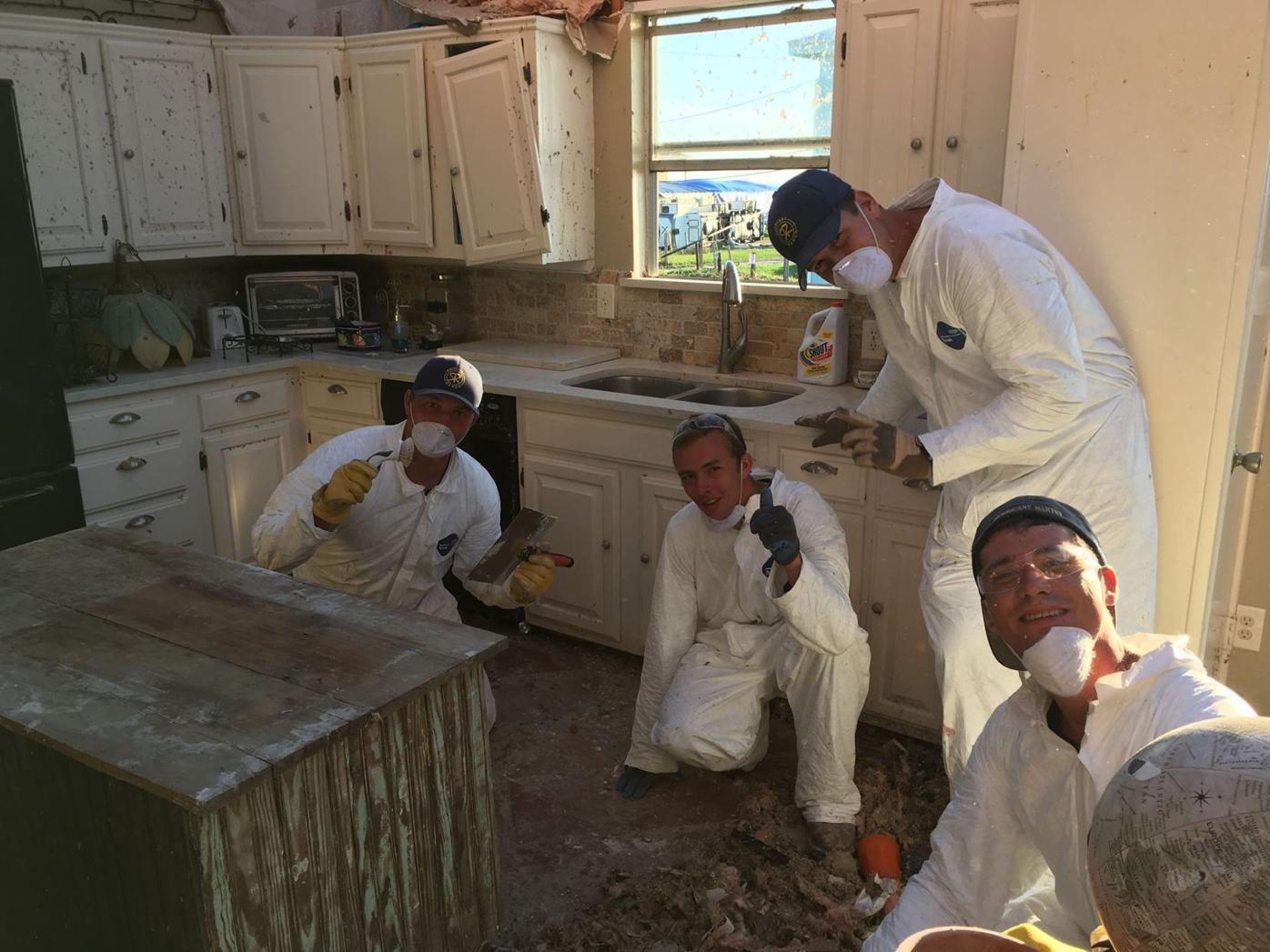 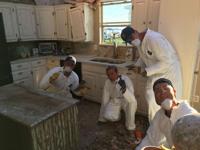 A crew from Recovery Ranch in Santa Ynez helps clean up a kitchen damaged by Hurricane Harvey in Rockport, Texas. 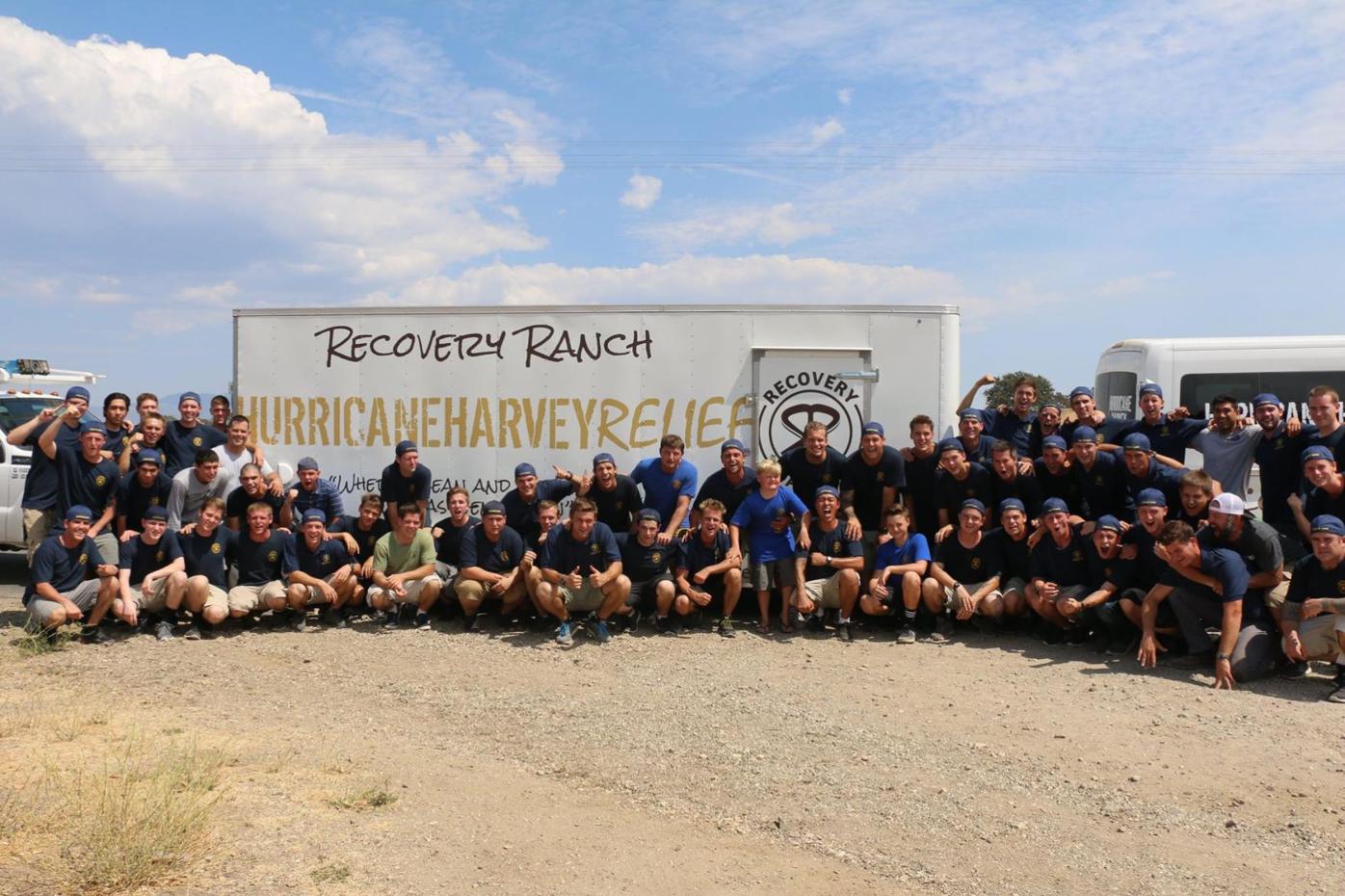 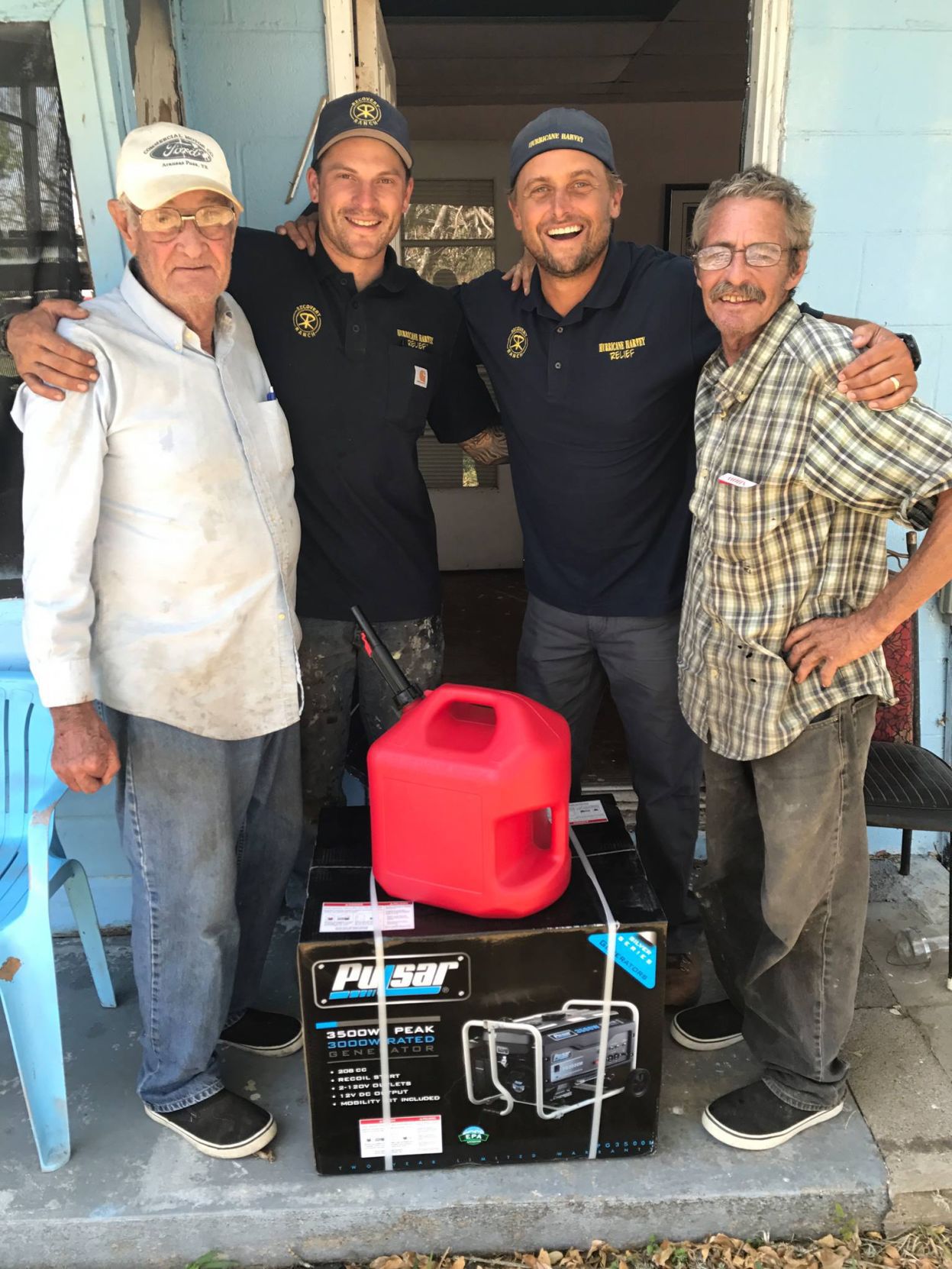 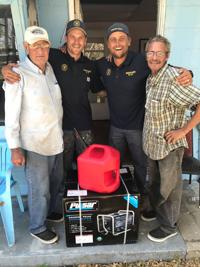 Daniel Ross (second from right), owner of Recovery Ranch in Santa Ynez, stands with a ranch leader and two residents of Rockport, Texas, who received new generators as donations from the ranch. 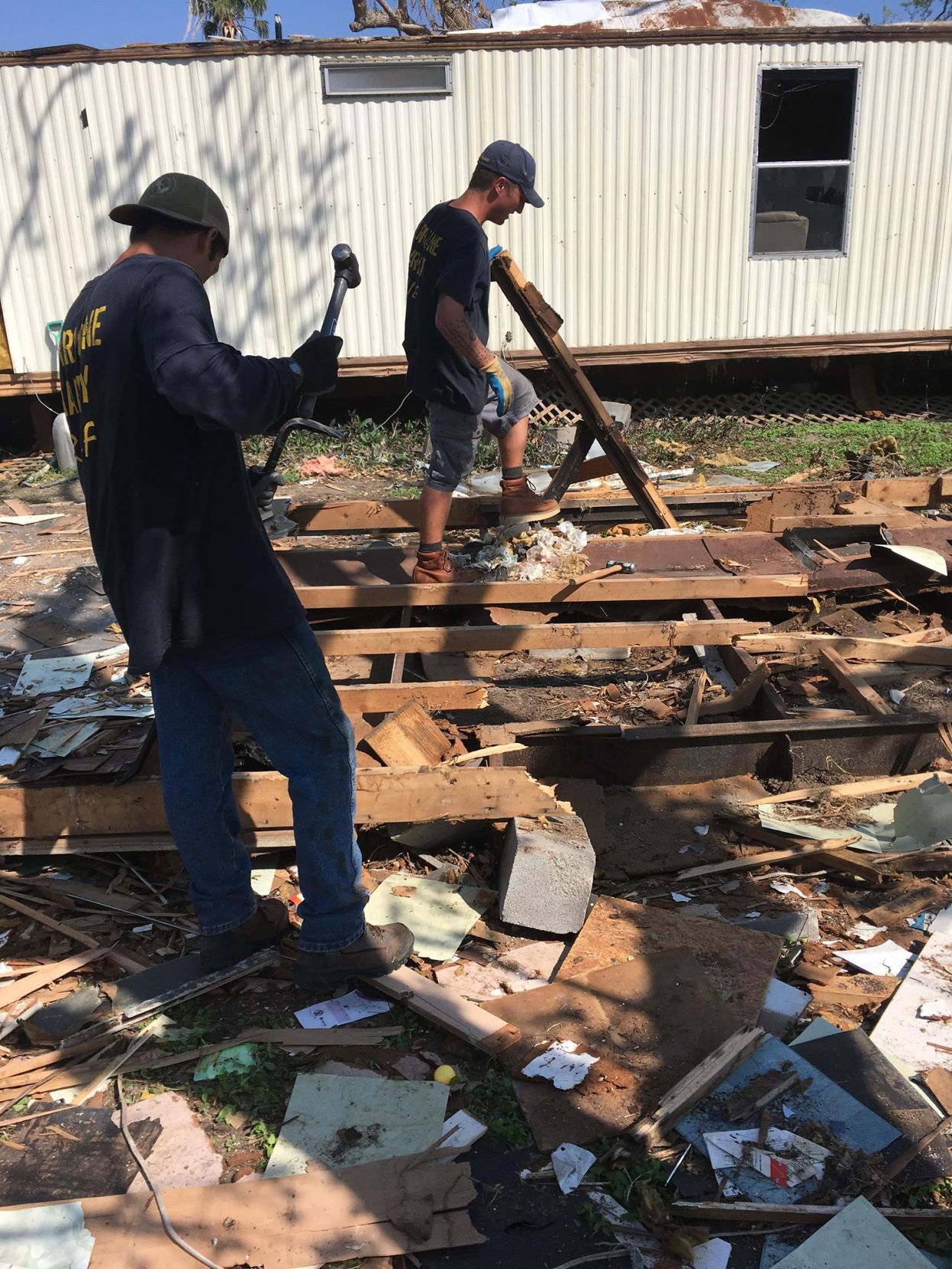 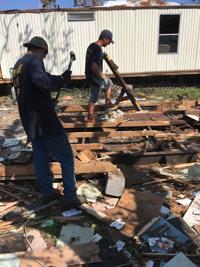 Two volunteers from Recovery Ranch in Santa Ynez help clean up debris from the devastation of Hurricane Harvey in Rockport, Texas. 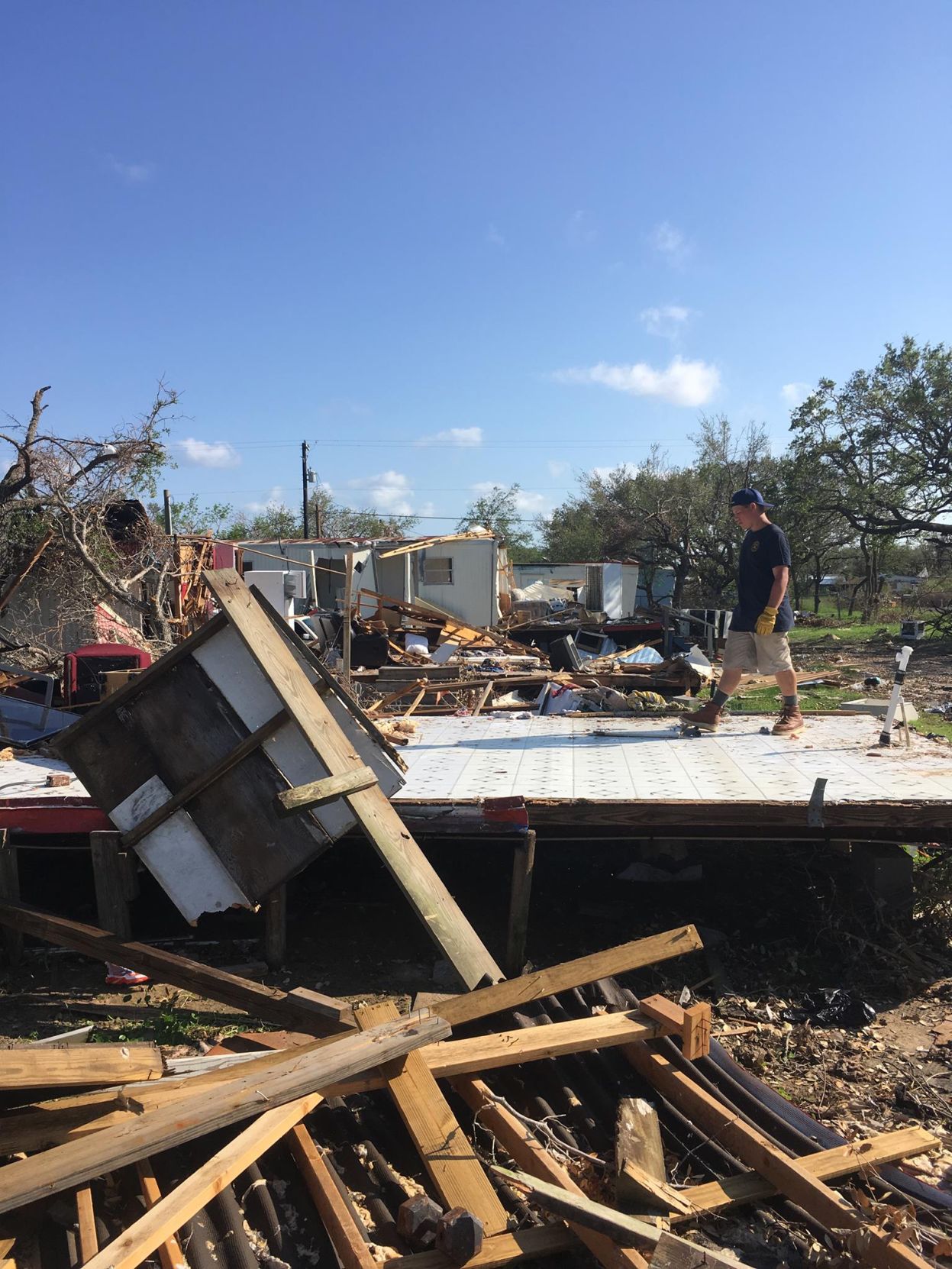 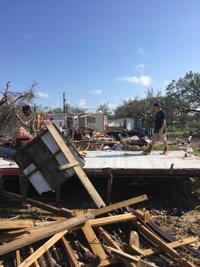 A volunteer from Recovery Ranch in Santa Ynez views the devastation from Hurricane Harvey in Rockport, Texas. 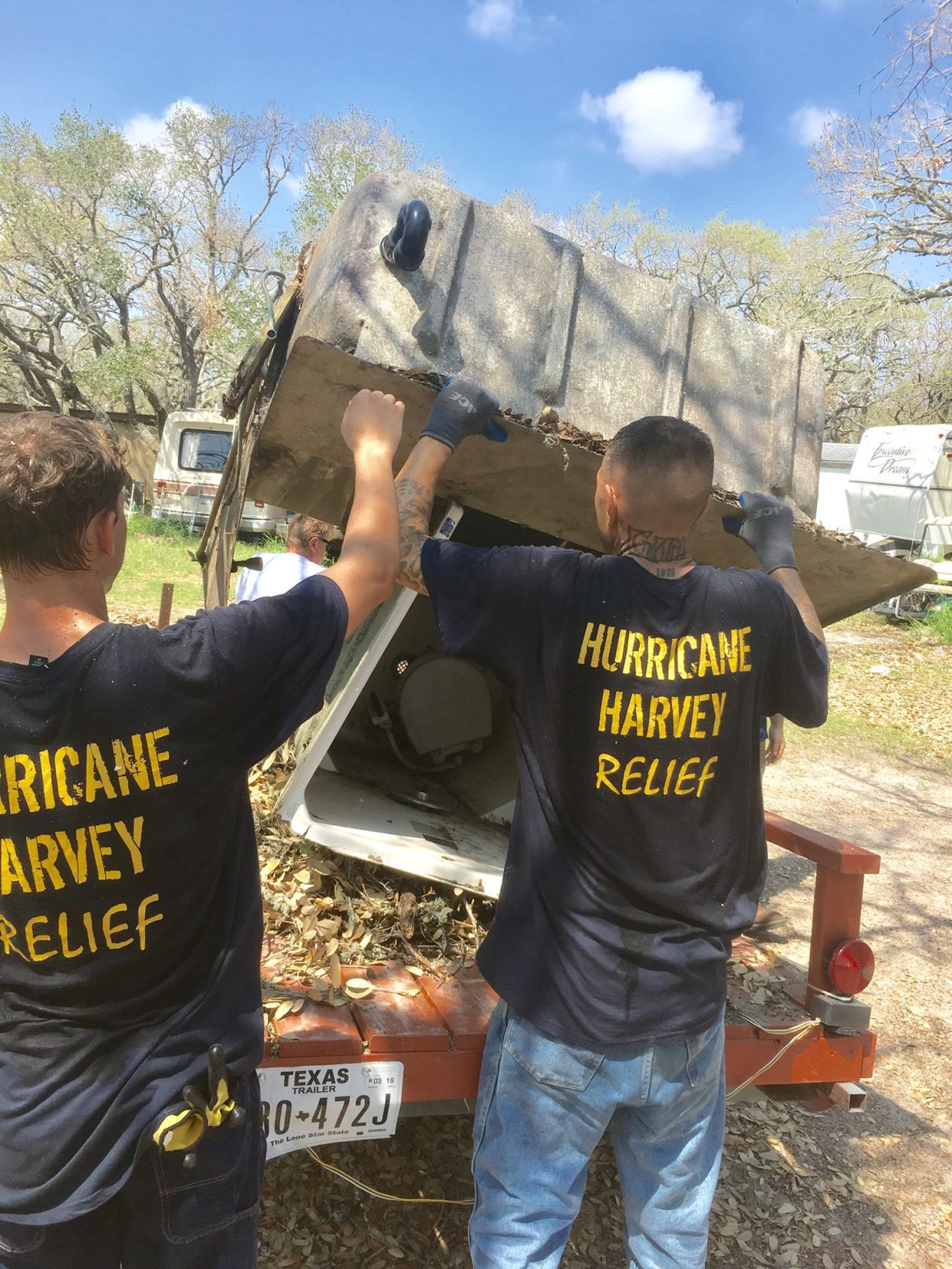 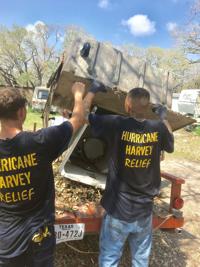 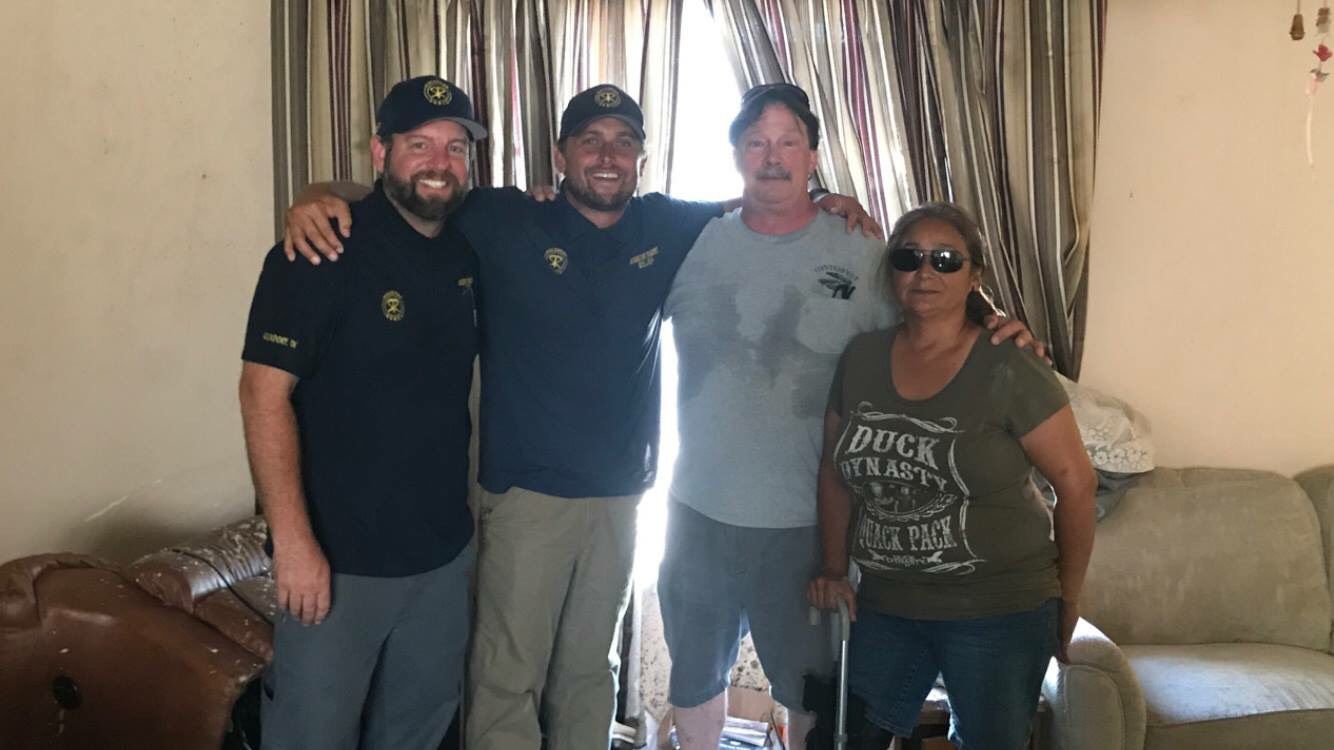 Bryan English (left) and Daniel Ross from Recovery Ranch stand with Randy (second from right) and his wife after inspecting the damage done to their home after Hurricane Harvey hit Rockport, Texas.

A crew from Recovery Ranch in Santa Ynez helps clean up a kitchen damaged by Hurricane Harvey in Rockport, Texas.

Daniel Ross (second from right), owner of Recovery Ranch in Santa Ynez, stands with a ranch leader and two residents of Rockport, Texas, who received new generators as donations from the ranch.

Two volunteers from Recovery Ranch in Santa Ynez help clean up debris from the devastation of Hurricane Harvey in Rockport, Texas.

A volunteer from Recovery Ranch in Santa Ynez views the devastation from Hurricane Harvey in Rockport, Texas.

Bryan English (left) and Daniel Ross from Recovery Ranch stand with Randy (second from right) and his wife after inspecting the damage done to their home after Hurricane Harvey hit Rockport, Texas.

After Hurricane Harvey wreaked havoc on southeast Texas in August, dumping an estimated 61 inches of rainfall in less than a week, relief followed and people rushed in to help.

Among those who traveled to Texas were 52 men from Recovery Ranch in Santa Ynez, who have fought their own battles against the devastation caused by addiction to alcohol and drugs.

Just before Harvey hit, a graduating class of clean-and-sober men received certificates for completing nine months of continuous sobriety at the ranch. Owner Daniel Ross, 44, recalled the day the group decided to help the victims of Hurricane Harvey.

“Right before the hurricane hit, we had our graduation at the ranch and we were talking about what we had done last year with Hurricane Matthew,” said Ross, referring to the group’s trip to North Carolina in 2016. “As soon as Harvey hit, we decided, ‘Let’s go and help.’”

After Harvey hit, dozens of men from the ranch packed their trucks and vans and headed toward the center of the destruction. The Category 4 hurricane — which made landfall near Rockport, Texas, on Aug. 25 — generated winds of up to 130 mph. It lasted several days, caused massive flooding and is considered one of the worst hurricanes since 1961.

Men from the ranch, ranging from their mid-teens to early 40s, rely on the 12-Step program of Alcoholics Anonymous and former UCLA basketball coach John Wooden’s books about living with integrity. Ross said some of the residents of the ranch used the experience they gained a year earlier in North Carolina, where they cleared away wreckage and helped Fayetteville residents after intense flooding.

With no tents to sleep in and no tools to work with, the men from Recovery Ranch had to purchase everything they needed locally. Although they were glad to donate the tools and supplies before flying back to California, Ross said the experience taught them lessons.

This year, after Hurricane Harvey hit, the ranch sought local sponsors for vans, which the men decorated with decals. In addition to six vans, they loaded two trucks with tools and camping supplies for the two-week trip. They also brought a fully stocked food truck and trailers for additional goods.

“We had a huge convoy, and as soon as we got to Rockport we were able to set up tents and set up the food truck,” Ross said. “People from the town could come to us right away and tell us what their needs were. Other people in the area, when they found out Recovery Ranch was there, brought trucks with stuff to distribute. We became kind of the hub to distribute things to people in the community.”

After a natural disaster hits, government agencies and insurance companies are inundated. It’s difficult for victims to get help. Just having someone to speak with, who is supportive and empathetic, is a huge comfort, Ross said.

“They were telling us that all of the tornadoes that came out of the hurricane took down a lot of trees. So we removed a lot of those.”

The ability to tend to people’s needs without having to deal with red tape makes volunteers valuable in the aftermath of a natural disaster with intense flooding. In addition to cutting and removing fallen trees, the men removed rain-soaked drywall from homes that were destroyed by Harvey, Ross reported. He estimates ranch volunteers helped about 40 families with their homes by removing soaked drywall and piling it up where crews with heavy equipment and trucks could haul it away quickly.

“One guy, his whole house was caved in, and he was just waiting for the insurance adjusters to show up,” Ross said. “He didn’t want to touch anything, but he said a friend of his needed a generator. So we were able to get him a generator. We bought two, and gave one to him and one to his friend.”

In addition to providing funds for expensive items like generators, Ross said Recovery Ranch started a GoFundMe page that surpassed 120 supporters and raised more than $33,000 for Hurricane Harvey relief.

“The sad part was that a lot of the neighborhoods we worked on … the people were so poor, and everything they had was pretty much destroyed,” Ross said. “The most rewarding thing is that people really appreciated what we were doing. You realize what people are going through. Their homes have been taken away and they have no place to live.”

Matthew Kennedy was among the 52 men from Recovery Ranch who traveled to Texas.

“I’ve been here for almost nine months now,” said Kennedy, 27. “I’ve never done anything like that before … just seeing how devastated Rockport was and how appreciative the people were. It was a gratifying experience. It was awesome.”

Ross explained that because the first priorities immediately after a hurricane are safety and security, people’s basic needs for fresh water, food and shelter are often overlooked initially. Although Recovery Ranch made no advance arrangements with local officials prior to driving to Rockport, they were welcomed by authorities.

“As soon as we got there, we checked in with the local cops, and they said, ‘If you guys are here to help, you can camp here,’” Ross recalled, noting everyone from the group dressed in matching clothing with Recovery Ranch logos on their shirts and caps. “One of the things we really liked about this is we could just go and help. There’s endless stuff to do out there. It’s nonstop.”

Bryan English, one of the leaders at Recovery Ranch, echoed those sentiments.

“It was nice to see a lot of guys dive right in,” said English, 38. “You would hear people complain about how they were waiting and it was nice to be able to go in and help right away and just do something for them. It was a great trip for all of us and it was an awesome experience for all of the guys.”

Far from the Valley

Rockport is a long way from Recovery Ranch, where chores begin at sunrise.

“We have really high standards,” Ross explained. “Every morning we make our beds with hospital corners. All those details are really important because that’s how we start our day. We don’t want to use — as an excuse— that we were addicts and alcoholics, for not being responsible men. Being honest and having good character and integrity are all the things we practice here.”

Mitch Ambulos is one of the young men at the ranch who went to Texas with an open mind about recovery and relief.

“I wanted to help out,” said Ambulos, 22. “I’m very selfish. I never give back. And I wanted to feel that I did something with purpose. I felt that. I ran the food trailer there. A couple of ladies came up and were crying, and that really got to me.”

Ross said one of the principles instilled at the ranch is the importance of giving back to people in need.

“We’ve been given this incredible gift of recovery,” he said, “and we want to give back.”

In addition to lessons learned from North Carolina, Ross said the men learned recovery is all about gratitude.

“The biggest lesson we learned was just how much we take for granted. How good it feels to help someone else.”

Recovery Ranch consists of a main house, a few smaller buildings and a barn on nearly 1 acre in Santa Ynez. It is part of several affiliated private, for-profit businesses, including Ranch Hands, The Ranch Men’s Store, and Ranch Academy in downtown Santa Ynez. Its motto is: “We’re clean and sober men, live as gentlemen.” Contact: 3694 Tivola St., Santa Ynez, CA 93460; (805) 705-0766.