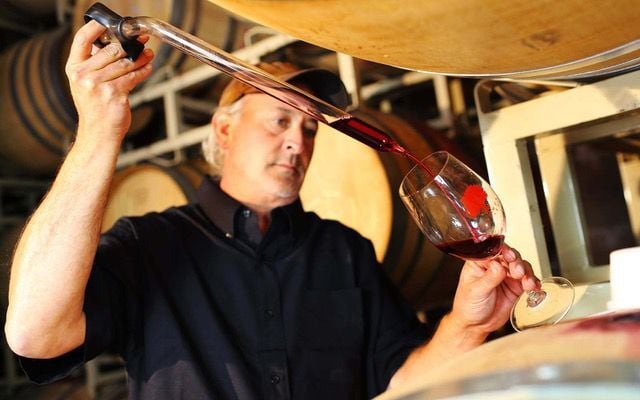 I recently read an article about the six best wineries on Foxen Canyon Road, and three of them have been longtime favorites of mine.

Not for their motivations in producing fine wines, it’s strictly for their history of making great wines consistently well annually. In my experiences over the past 25 years, I would be hard-pressed to pick between Beckmen and Foxen, both are among my favorites, they are equally great. But I have also favored Andrew Murray Vineyards for many years.

Beckmen Vineyards founded their two vineyards and estate in 1994, just two years before I relocated to the Central Coast. Their focus is on Rhone varieties in the Los Olivos District AVA (American Viticultural Area), and their certified Biodynamic Purisima Mountain Vineyard, which is in the Ballard Canyon AVA.

The Beckmen’s two vineyards are in separate AVA’s with different soils and climates that are ideal for Rhone varieties like syrah, grenache, viognier, grenache blanc, Mourvèdre, and counoise grown in Purisima Vineyard, and the cabernet sauvignon in the Beckmen estate vineyard.

I’ll never forget my conversation with the Beckmen’s youngest son Stephen, who’s their winemaker, when he told me the story about converting the Purisima Vineyard to biodynamic farming.

He noted the experimental block they changed produced wine grapes so outstanding, they immediately converted the entire vineyard to biodynamic. While I have long loved their traditional Rhone wines, I also loved their grenache rose so much, I considered it one of the best on the Central Coast. Check them out and view their beautiful estate gardens at www. Beckmenvineyards .com.

Foxen Vineyard’s Dick Dore grew up in the Santa Maria Valley on a ranch owned by his family. He partnered in 1985 with Bill Wathen in winemaking, and they founded the Foxen estate in 1987.

Dore named the winery after his great-great grandfather, Captain Benjamin Foxen, who purchased the historic Rancho Tinaquaic in 1837, a 9,000-acre Mexican land grant that we now know as Foxen Canyon. The anchor on the Foxen label is in tribute to the captain. The winery expanded to another tasting room, but the original “shack” is still open to the public. Both tasting rooms’ names refer to their addresses, 7200 and 7600 on Foxen Canyon Road.

The shack, as I still refer to it, features their Bordeaux and Italian-style wines, while the new tasting room showcases Burgundy and Rhone varieties. Their passion and skill at making such a wide array of great red and white wines, shows in every bottle.

I have always been a fan of their chenin blancs, pinot noirs, and cabernet sauvignons, but you can’t go wrong here. While Dore and Wathen have always favored minimalist winemaking, and sustainably-raised vineyards, they became a solar-powered winery once they built the new winery and tasting room.

Learn more about this fine winery at www. Foxenvineyard .com. On the webpage you can make reservations and get more details about their excellent range of wines.

Winemaker Andrew Murray made a very good impression on the wine critics when he devoted his wine estate to red and white Rhone wines exclusively. In fact, the world famous critic Robert Parker, Jr. referred to Murray as, “one of the shining stars in the Santa Barbara firmament.”

Murray was studying paleontology at UC Berkeley, until a trip to France’s Rhone Valley in the 1980s turned his head. He was so inspired by the syrahs and viogniers he tasted, he found an internship in Australia in 1992 to learn to make those wines. He stayed there 15-months, and upon returning home switched his studies to UC Davis for their highly esteemed viticulture and enology program.

Andrew Murray Vineyards was established on Foxen Canyon Road with much ado. I was invited for the grand opening, and it was awesome. The family had built a pizza oven on the grounds, with great caterers serving gourmet treats, helicopter rides, vineyard tours, and generous tastings.

An amazing event I’ll never forget, even though I missed out on the helicopter ride. These days you can visit Andrew Murray on Foxen Canyon Road. Or you can visit his second tasting room in the heart of Los Olivos, named e11even by Andrew Murray. This new brand gives Murray the freedom to explore with other varieties such as pinot noir and chenin blanc. And his tasting room for e11ven, amidst many great tasting rooms, is open daily.

You can get all of the information you need on www. Andrewmurrayvineyards .com. Please do sign on to the website for local businesses in Los Olivos at www. Losolivosca .com, I’m glad I did as it keeps me informed about every event happening there.

Amazing information providing by your article, thank you so much for taking the time to share a wonderful article.

Ok, thanks for the information and have a good day! mobdro