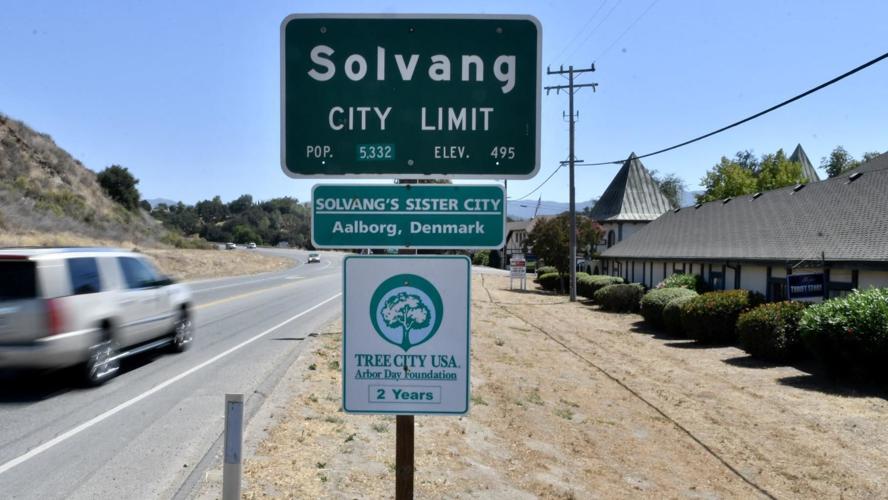 Many of Solvang's single-family residential units have been converted into vacation rental units, taking them off the long-term rental or sales market. 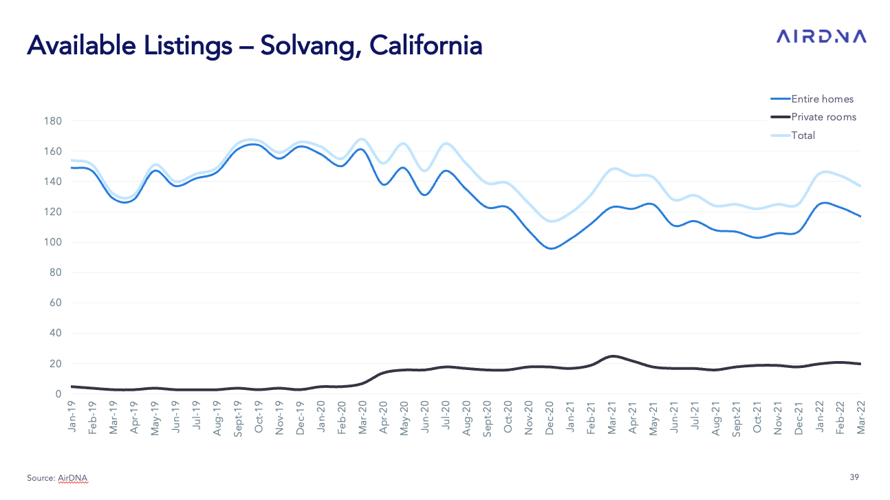 Available listings are tracked in Solvang from January 2019 to March 2022. 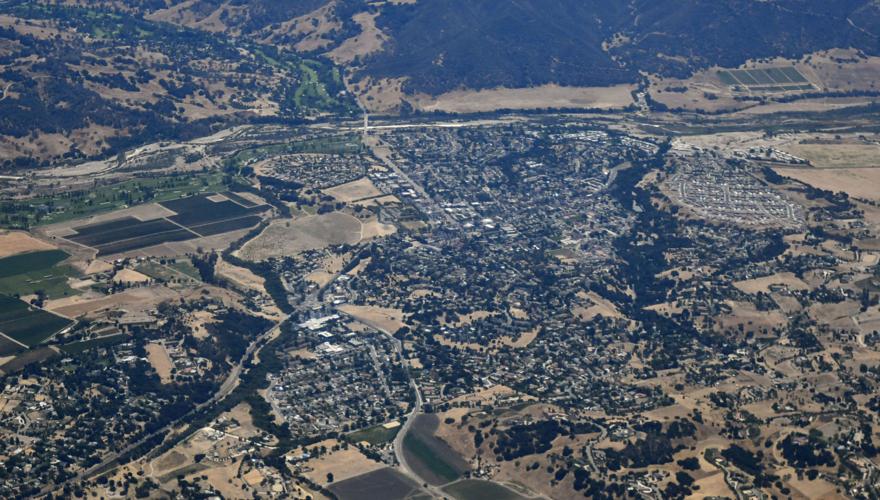 Solvang is shown July 11, 2017, in an aerial photo. Solvang's housing element update, required by the state, is designed to address housing needs through 2031.

With no rentals available in town for its local workforce, no affordable homes for sale and scant few homes available for sale at any price, the city of Solvang is seeking public participation as it grapples with the future of housing.

The city will hold its next 2040 General Plan public workshop at 6 p.m. May 11 online via https://zoom.us/j/3066529195. Officials also are requesting residents’ participation in the housing needs survey posted at https://plansolvang.com/housing.html by May 21.

The housing element update, required by the state, is designed to address housing needs through 2031. The state requires cities and counties to update their plan every eight years, and updates are subject to review and approval by the California Department of Housing and Community Development.

“The local rental vacancy rate is zero. There are no vacant rentals in the whole valley, let alone Solvang,” she said.

She noted there were 15 homes on the market at the time, only two of which were offered at less than $1 million, and no rental availability.

“That’s been the case for several months now, so we’re really in a bad spot right now with housing,” Breen said.

For those who could afford it, buying a second home, vacation home, or property intended as an income-generating vacation rental became nearly a pastime during the height of the pandemic. With interest rates at historic lows, more workers than ever enabled to work remotely, a desire to escape crowded cities amid a viral outbreak, properties in small towns and rural spaces were at a premium.

Rising mortgages rates may have cooled jets, but not soon enough for cities like Solvang which currently have few homes on the market.

As of Sunday, the only rental listed by Zillow within Solvang city limits was a five-bedroom, five-bath, 3,901-square-foot home on Ladan Drive listed at $18,000 per month. The least expensive home among the 10 properties listed for sale was $749,000 for a triple-wide mobile home parked in Rancho Santa Ynez Estates.

Many of the city’s single-family residential units have been converted into vacation rental units, taking them off the long-term rental or sales market.

According to data collected by AirDNA, Solvang’s short-term vacation rental inventory listed with common online booking services included 117 homes and 20 private rooms in March, down from a high of 168 total units in March 2020.

With exception of the brief surge in short-term rental units available in early 2020, the supply of available listings has dropped slightly from and demand has yet to recover to pre-pandemic levels, AirDNA Senior Communications Specialist Chloé Garlaschi reported. But fewer units on the market has only driven rates higher, from an average daily rate of $314 in March 2019 to $363 in March 2022.

“Since the onset of the pandemic, we've noticed a growth in ADRs globally, as larger properties are being booked for whole families traveling together. ADRs are also affected by the concept of ‘revenge travel,’ as guests are willing to spend a bit more for a more luxurious stay after so many months without a holiday. Increased cleaning procedures due to the pandemic can also increase prices,” Garlaschi stated.

Short-term rental supply is flexible and highly correlates with existing demand. A listing can easily be activated or deactivated at any time. Property managers may take any given property offline for a month for personal use or longer-term rentals, then return to short-term rental when the market is more profitable such as local high seasons.

Projects near Orcutt found to conform with Comprehensive Plan, others not ready to consider

Since 2016, Solvang has regulated vacation rentals. Its municipal code allows such short-term rentals only in the city’s tourist-related commercial (TRC) zone and along the south side of Copenhagen Drive east of Fifth Street from 1506 to 1546 Copenhagen Drive. Regulations include: registration of the property with the city, annual written notice to neighboring property owners within 100 feet of the vacation rental, a maximum of two adults per bedroom plus two additional adults, and payment of transient occupancy tax (TOT).

“Generally speaking, in the last three years, we’ve only heard one complaint from a resident. It’s definitely an interesting trend,” Bradford said.

Some cities have attempted to rein in the vacation rental market to address a dearth of residential rentals.

In December 2018, the Los Angeles City Council members voted nearly unanimously to adopt an ordinance specifically designed “to prevent the wholesale conversion of homes into rental properties.” The Home-Sharing Ordinance restricts short-term rentals to primary residences. Hosts much register with the city and post their registration number on all advertisements.

In July, the Placer County Board of Supervisors issued an urgency ordinance to stop new short-term rentals, and in September, the Truckee Town Council followed suit with a similar moratorium while still allowing short-term rental of one bedroom within a home with one family in a permanent residence, with a maximum of one short-term rented bedroom per parcel.

“The COVID-19 pandemic has also exacerbated the housing crisis that the Tahoe region has experienced for years. Over the last decade, the rise in second home ownership and (short-term rentals) in the region has continued to grow, resulting in a decrease in available housing stock for the local workforce,” stated a staff report from the County of Placer Community Development Resource Agency.

The shortage has been particularly noticeable in rural communities, according to Lance George of national rural-housing nonprofit Housing Assistance Council.

“One major theme is rural communities have a dearth of good quality rental housing to start with,” George told the Daily Yonder in July 2021.

In rural areas, the rental housing that does exist is likely to be less dense, consisting of single-family homes rather than multi-family complexes.

“And when you cut into that market at any time, then you’re probably going to inhibit choices for lower-income residents. Economics is all about choices: Someone has a choice to pay higher and others might not have those choices,” George said.

Bradford said she doesn’t see Solvang, which thrives on tourism, looking to rein in vacation rentals.

“The city would have an interest in a mix of housing. Workforce housing is important, but vacation rentals are also an additional supply of our hotels rooms, so at this point we haven’t considered limiting this kind of use. If we see a trend where we’re getting more housing units toward vacation rentals versus what they’re supposed to be and in conflict, then we’d start a discussion on whether regulation for rentals needs to be amended,” Bradford said.

The council has already adopted its preferred land use alternative which provides for mixed-use designations in the tourist-related commercial zone and commercial areas. The plan provides for the infill of additional housing as well as mixed-use which would allow housing and business uses to coexist in the zone.

The city must also determine how to meet its state-mandated housing allocation of 191 units, “which is fairly reasonable,” Bradford said.

During the housing element update, the city will also discuss the future of one of the largest undeveloped parcels on Alamo Pintado Road across the road from the shopping area and hospital.

For General Plan details, to sign up for the General Plan e-mail list, or to participate in surveys, visit PlanSolvang.com.