An architectural rendering shows how the four-story apartment buildings proposed for 1783 Mission Drive in Solvang by Ed St. George might appear from the Mission Drive side. 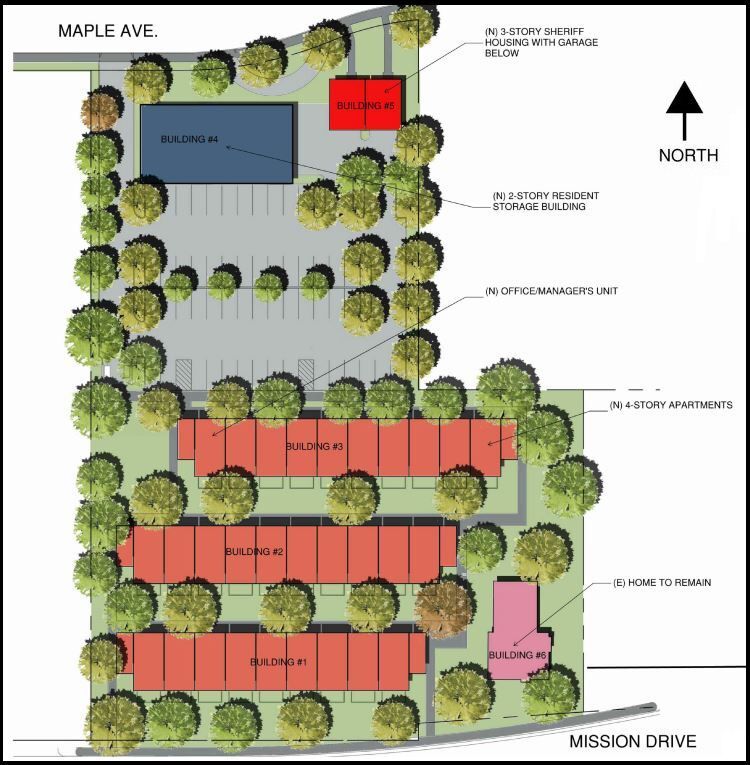 A site plan prepared for Ed St. George shows how his proposed apartment complex would be situated on the 2-acre lot formerly occupied by Skytt lumberyard in Solvang. In addition to three four-story apartment buildings, the complex would include a two-story storage building for residents, a three-story two-unit apartment building, with garages on the bottom floor, for sheriff’s personnel and an existing single-family home retained to also house sheriff’s personnel. 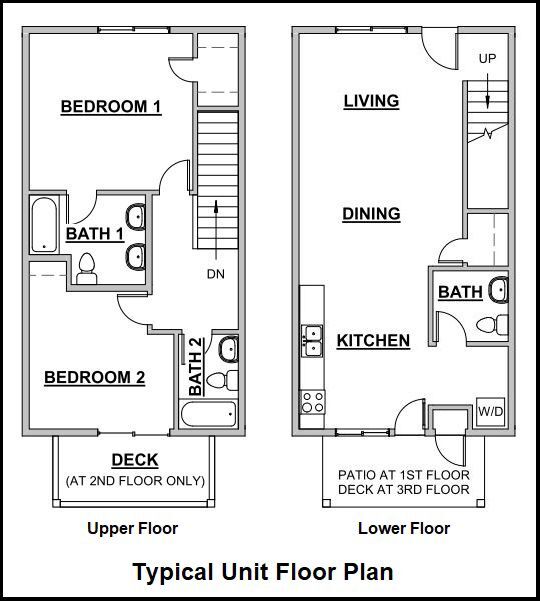 Typical two-level units in Ed St. George’s proposed apartment complex on Mission Drive in Solvang would have an open living, dining and kitchen area with a half-bath on the lower floor and two bedrooms and two bathrooms on the upper floor.

A developer who couldn’t drum up support for his plans for a European-style plaza, a scaled-down plaza and then simply a hotel in Solvang said he has abandoned the concept and submitted plans to the city for an apartment complex instead.

“That project wasn’t getting any traction, so we’re going back to housing,” developer Ed St. George said Wednesday.

Plans submitted to the city call for construction of three four-story apartment buildings, one with 18 units and two with 20 units, on the Mission Drive side of a 2-acre lot formerly occupied by Skytt lumberyard.

One unit would be reserved for the manager.

St. George said the apartments are being being built under the provisions of Senate Bill 330, the Housing Crisis Act of 2019, that streamlines the permit process, so he thinks construction might be underway in 18 months.

“Of course, we still have to go through a couple of Planning Commission meetings,” he added.

The architectural design doesn’t adhere to the Danish style that dominates downtown Solvang just a block away, but he isn’t worried about that being an issue.

“But actually, it kind of fits the neighborhood,” he added, noting the style is more like the residential complex across Maple Avenue to the north.

Each of the two-bedroom, three-bath units would have two floors, with the lower floor providing an open living, dining and kitchen area plus a half-bath and space for a stacked washer and dryer.

The upper floor would consist of two bedrooms and two bathrooms, one with two sinks and a larger closet.

Once the center's $2.5 million capital campaign hits its first financial benchmark — $1.5 million — the plan is to break ground on the project. So far they have raised $450,000.

SB 330 also includes provisions for building affordable or workforce housing, which this complex will provide.

“It’s classified lower income [housing],” St. George said. “I would expect some of the two bedroom, two-bathroom units to start around $500 to $600 a month.”

New construction would also include a two story building for residents’ storage.

“We’re going to take advantage of the gradient difference there by putting a storage unit on the property for the residents,” St. George said. “Instead of 15 extra parking spaces, we’ll put up a 9,000-square-foot two-story storage unit, and every apartment will get an 8-by-10 storage compartment.”

The complex also will include a new three-story building with two apartments designated for sheriff’s deputy housing, with a garage on the ground floor below each apartment.

“Have you ever known a sheriff’s deputy that didn’t have a Harley and a boat?” St. George joked.

The storage building and sheriff’s apartments would be constructed on the Maple Avenue side of the lot and separated from the four-story apartments by a parking area with access from Maple.

St. George said he’s been talking with the Santa Barbara County Sheriff’s Office for two years about incorporating housing for sheriff’s personnel in the project

The number of residential units would require 59 parking spaces, and the plans provide 62 spaces.

“We’ve given this a lot of thought,” St. George said.

But when he initially met with Mayor Ryan Toussaint, he was told a hotel was what the city really needed to generate revenue through the transient occupancy tax charged on every room rental. The TOT makes up a large chunk of the city’s income.

“More than 50% of the city’s TOT comes from one hotel, and that’s the Alisal [Guest Ranch & Resort],” St. George said. “God forbid anything happen to that.”

His initial proposal, which would have involved demolishing the Veterans Memorial Building, the Solvang Library, Solvang Senior Center, the sheriff's substation, courtroom and county offices, put many Solvang residents up in arms in May.

Residents objected to what they said was the loss of the city’s history and heritage.

St. George responded with a modified project that would make the Veterans Memorial Building the centerpiece of the plaza, with existing agencies and organizations retaining a place in the project.

Mark Oliver: Ripping the heart out of Solvang

GUEST COMMENTARY If the Solvang city council cannot do the right thing and pull the plug on this downtown development proposal, then put it to a vote of the citizens of Solvang. We guarantee the development will be overwhelmingly condemned.

“We were going to restore that,” St. George said of the Veterans Memorial Building, noting, however, that the city’s website does not say the building is historical. “We went back and looked at the calendar of events, and it was really not used that much. But it’s loved.”

His second proposal called for a plaza with two hotels, 36,000 to 49,000 square feet of commercial space, 105 to 181 housing units, some designated affordable, and a 500-space parking structure to be built in two phases at a cost of $250 million.

“That extra half a million [dollars] in TOT would really have helped Solvang a lot,” St. George said of the revenue-generating hotels.

But while that proposal didn’t stir up major opposition, it also didn’t generate much enthusiasm.

“It was suggested by a bunch of people that I develop a hotel on my own property and just see what happens,” St. George said.

But after turning in plans for that, nothing happened, he said.

“When I submitted it to the building department, nobody even looked at it,” he said. “It just sat.

“So I said, ‘You know what, I’m just going to build workforce housing,’ which is what I bought the property for to begin with,” St. George said.

Although his big vision of a European-style plaza didn’t come to pass, St. George appears to have no hard feelings toward city leaders.

“Kudos to the mayor and some of the council members,” he said. “They really did try hard to change the community — for the better, I think. … I really, really appreciate Ryan [Toussaint] for all his efforts.”

July 31 recap: Solvang news you may have missed this week

A head-on collision at Mission Drive and Alamo Pintado in Solvang has resulted in a fatality and forced the closure of the roadway for what could be an extended period of time, according to emergency scanner traffic.

A former flute teacher who taught programs across Southern California, including in the Santa Ynez Valley, pleaded guilty Thursday to a federal child pornography-related charge, according to a U.S. Attorney spokesman.

A Santa Barbara County Jail inmate who tested positive for COVID-19 in July, but recovered, was found dead inside his cell on Tuesday, according to a spokeswoman.

Youth organizations like the the YMCA and the Santa Barbara County Boys & Girls Clubs have pivoted from their typical after-school care model to full-day programming in order to help meet the changing needs of the local community.

Unofficial lists of candidates for school and special district boards in the Nov. 3 general election were released Monday, but a number of rac…

A Santa Barbara man was identified as the driver killed Friday in a head-on collision at Mission Drive and Alamo Pintado Road in Solvang, according to the Santa Barbara County Sheriff's Office.

A Lompoc religious nonprofit accused a Wyoming organic farm and a cannabis company of stealing water it uses to grow food and blocking access to a well on a neighboring parcel, despite a decades-old legal agreement allowing them to do so, according to a lawsuit filed in Santa Barbara County Superior Court.

An architectural rendering shows how the four-story apartment buildings proposed for 1783 Mission Drive in Solvang by Ed St. George might appear from the Mission Drive side.

A site plan prepared for Ed St. George shows how his proposed apartment complex would be situated on the 2-acre lot formerly occupied by Skytt lumberyard in Solvang. In addition to three four-story apartment buildings, the complex would include a two-story storage building for residents, a three-story two-unit apartment building, with garages on the bottom floor, for sheriff’s personnel and an existing single-family home retained to also house sheriff’s personnel.

Typical two-level units in Ed St. George’s proposed apartment complex on Mission Drive in Solvang would have an open living, dining and kitchen area with a half-bath on the lower floor and two bedrooms and two bathrooms on the upper floor.