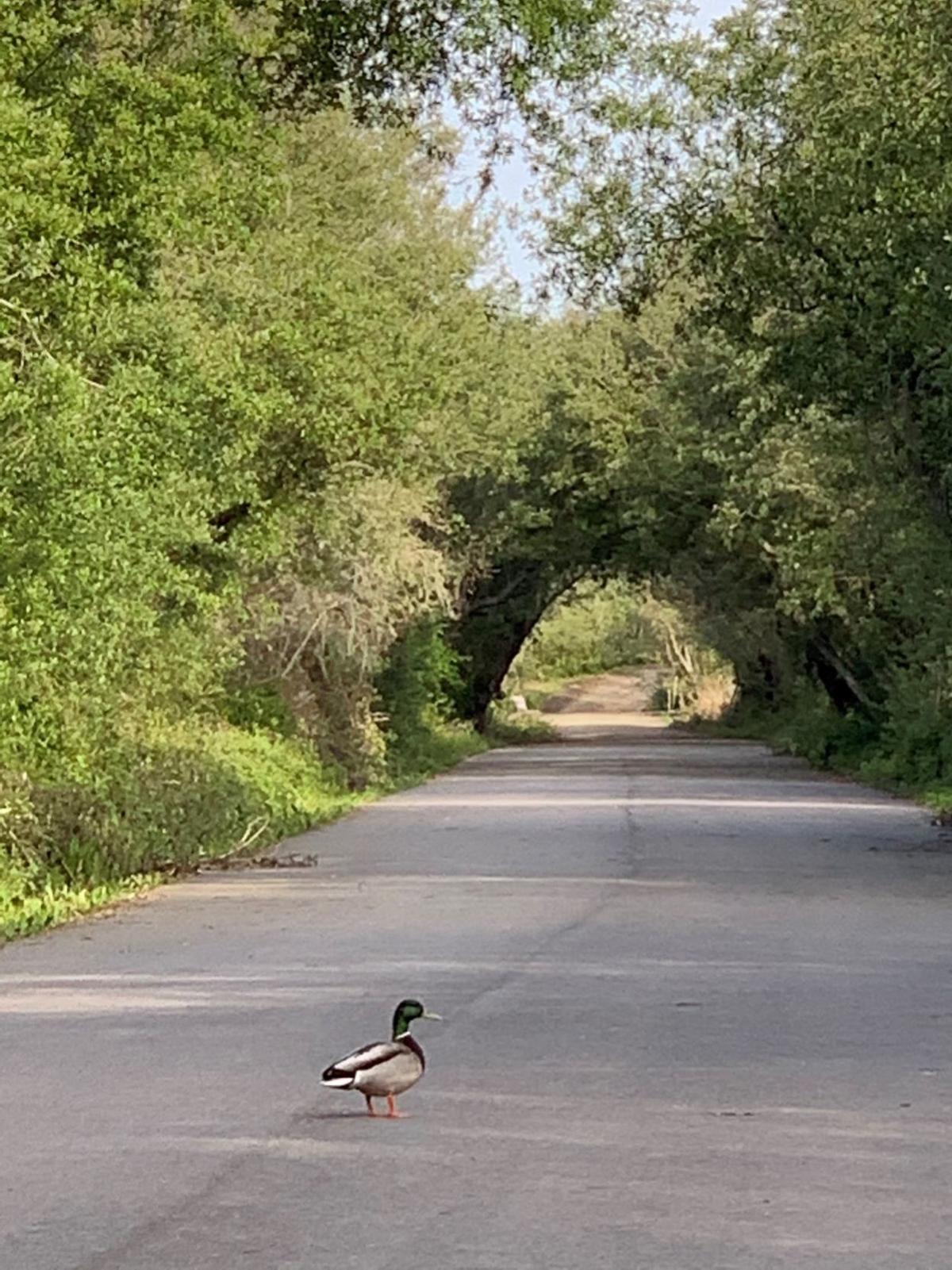 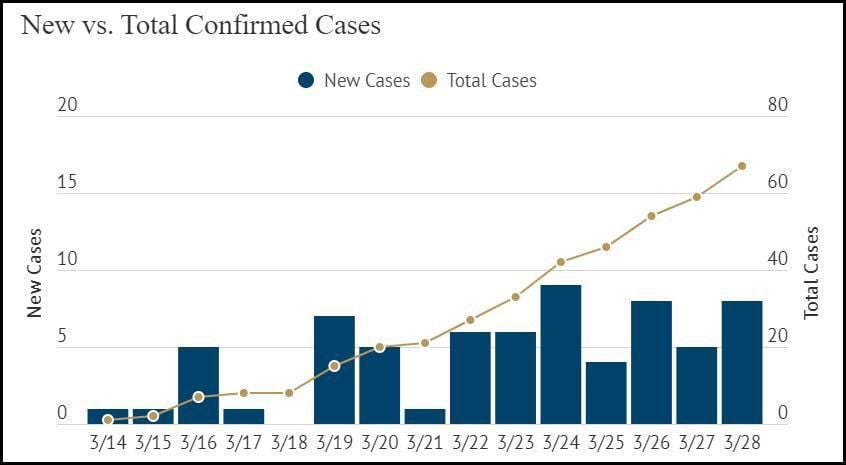 A graph from ReadySLO.org shows the daily progression of new confirmed cases of COVID-19 in blue bars compared to the total number of cases in the gold line. As of Saturday, San Luis Obispo County had 67 confirmed cases, while Santa Barbara County had 64.

The Santa Barbara County Public Health Department on Saturday said it had confirmed 17 new cases of COVID-19, bringing the total to 64 — nearly as many as the total 67 reported in San Luis Obispo County.

No deaths have been reported in either county, but five of the two counties’ patients are in intensive care units.

Of the new cases, nine are from Santa Maria, one is from Lompoc, five are from Santa Barbara and two are from the unincorporated areas of the South County, a spokesman for the county’s Joint Information Center said.

Although the Public Health Department released the cities and areas where confirmed COVID-19 cases have occurred, the spokesman said “it is critical that residents in all areas of the county stay at home and practice social distancing when performing essential tasks outside their home.”

Of the total 64 patients, 47 are recovering at home, six are recovering in a hospital, which includes three in an intensive care unit, and 11 have fully recovered.

San Luis Obispo County had 67 confirmed cases of COVID-19 as of Saturday afternoon, with nine of those hospitalized and two of them in intensive care units, according to the ReadySLO.org website.

Forty-five patients are recovering at home, and 13 have fully recovered, according to the website, which noted the most cases — 19 — are in Paso Robles, followed by Arroyo Grande with 11 and Atascadero with 10. Morro Bay and San Luis Obispo each had six.

A total of 378 coronavirus tests had been conducted on SLO County residents, with 30 of the cases found by the County Public Health Department lab and 37 found by private labs.

Twenty-two of the victims acquired the disease as a result of travel outside the county, with the source of 18 cases still unknown but under investigation. Personal contact with a known source accounted for 14 cases, and 13 came as a result of contact with unknown individuals within the community.

We are putting together a list of area restaurants, bars and other businesses that have been impacted by the coronavirus restrictions — bans o…

These two sites are the latest additions to a list of parks the state has closed to vehicles in an effort to discourage crowds and limit the spread of COVID-19, a State Parks Department spokesman said.

However, the state-operated parking lot off West Grand Avenue in Grover Beach remains open to vehicles, although parking is restricted to one hour only.

California State Parks has also temporarily closed all campgrounds, museums and visitor centers in the parks system and canceled all events, the spokesman said.

As of Saturday, all noncampground outdoor areas of parks, including trails and beaches, and day-use restrooms remained open, but officials were advising visitors to bring their own soap for handwashing and to use alcohol-based hand sanitizers when water is not available.

If necessary, additional closures will be enacted in the coming days, the spokesman said.

An updated list of closures is available at www.parks.ca.gov/FlattenTheCurve.

The Santa Barbara County Board of Supervisors is scheduled to receive an update from Public Health Department officials Tuesday in a virtual meeting the public can’t physically attend but can watch online and comment on via email or telephone.

County staff will provide the most recent information on the status of COVID-19 cases and the county’s response in the meeting scheduled to begin at 9 a.m.

Members of the public will not be allowed to attend the board meetings in-person until the public health emergency is declared over but can view a livestream of the meeting at www.countyofsb.org/ceo/csbtv/livestream.sbc and on YouTube at:www.youtube.com/user/CSBTV20.

Those who wish to comment on a specific agenda item and have their comments placed into the record at the meeting should email them before 5 p.m. Monday to the clerk of the board at sbcob@countyofsb.org.

Those who decide to make a general public comment or to comment on a specific agenda item while watching the livestream can submit a comment, limited to 250 words, via the same email address.

The clerk will try to read those comment into the record but may not be able to due to time limitations. Comments received after an agenda item will be made part of the record if received prior to the end of the meeting.

Those who wish to comment by phone should call 805-568-2240 and state their name, phone number and which item they want to speak on, and the clerk will call those individuals at the appropriate time.

County adds website to help with economic recovery from the coronavirus

The Workforce Development Board of Santa Barbara County is gathering federal, state and local assistance programs available to small business owners, employers, employees and residents for the site.

The website, which can be accessed at www.readysbc.org/economicrecovery/, features the latest information and resources for both businesses and individuals affected by the COVID-19 pandemic.

“The county of Santa Barbara wants everyone to get the most up-to-date information about the financial assistance that is available now," said Gregg Hart, 2nd District supervisor and chairman of the County Board of Supervisors.

The site is divided into information for businesses and for individuals. Resources range from federal, state and local assistance programs, to immediate steps one can take and job opportunities.

Because information regarding businesses and workforce assistance is changing day by day, the site will be updated frequently to reflect the most recent information available, county officials said.

Those who need assistance can visit the website or contact the county staff by email at COVIDbiz@countyofsb.org.

This report was compiled by Mike Hodgson, associate editor for Lee Central Coast Newspapers. He can be reached at mhodgson@leecentralcoastnews.com.

A graph from ReadySLO.org shows the daily progression of new confirmed cases of COVID-19 in blue bars compared to the total number of cases in the gold line. As of Saturday, San Luis Obispo County had 67 confirmed cases, while Santa Barbara County had 64.