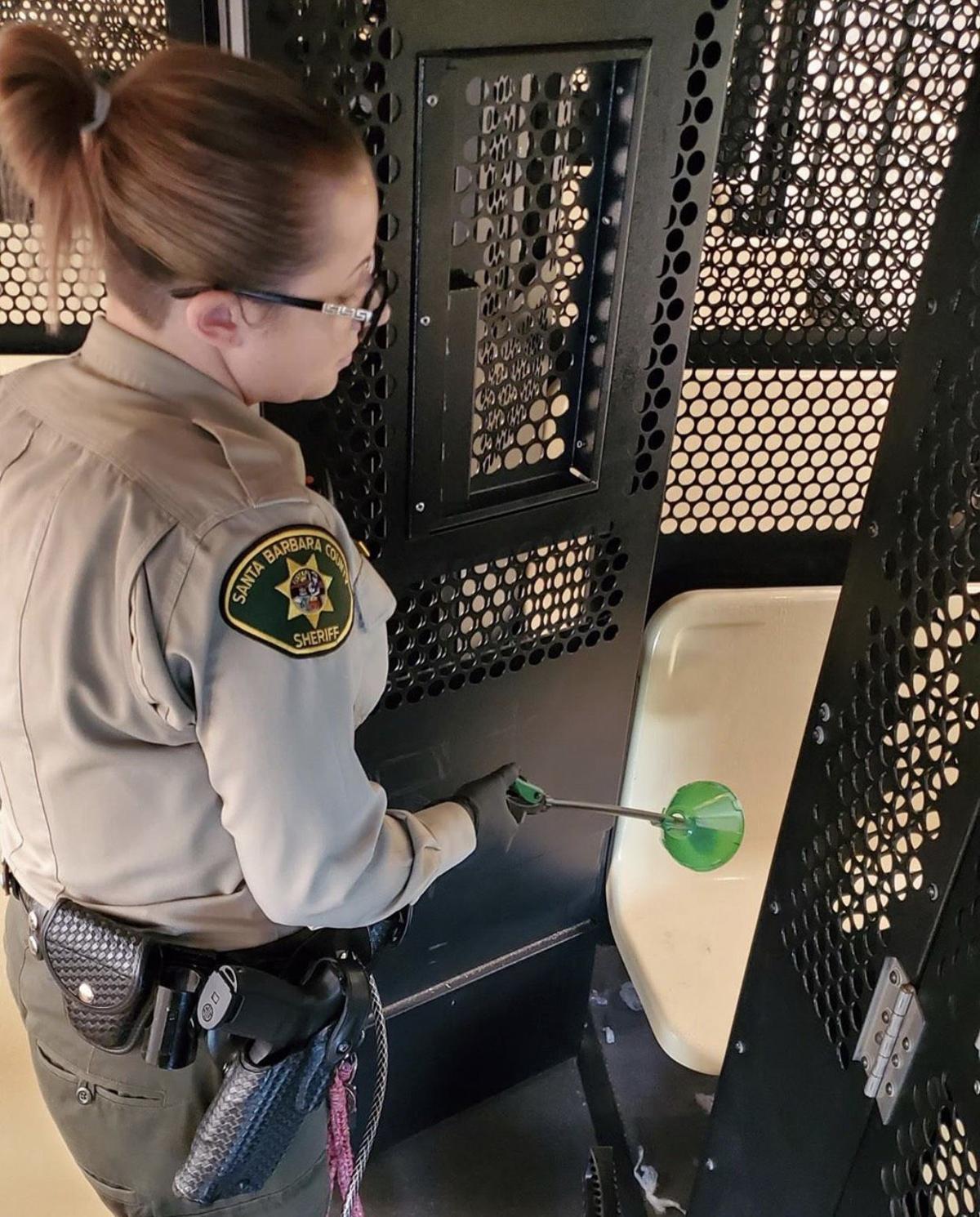 A Santa Barbara sheriff's deputy disinfects a holding cell in an effort to prevent the spread of the coronavirus. 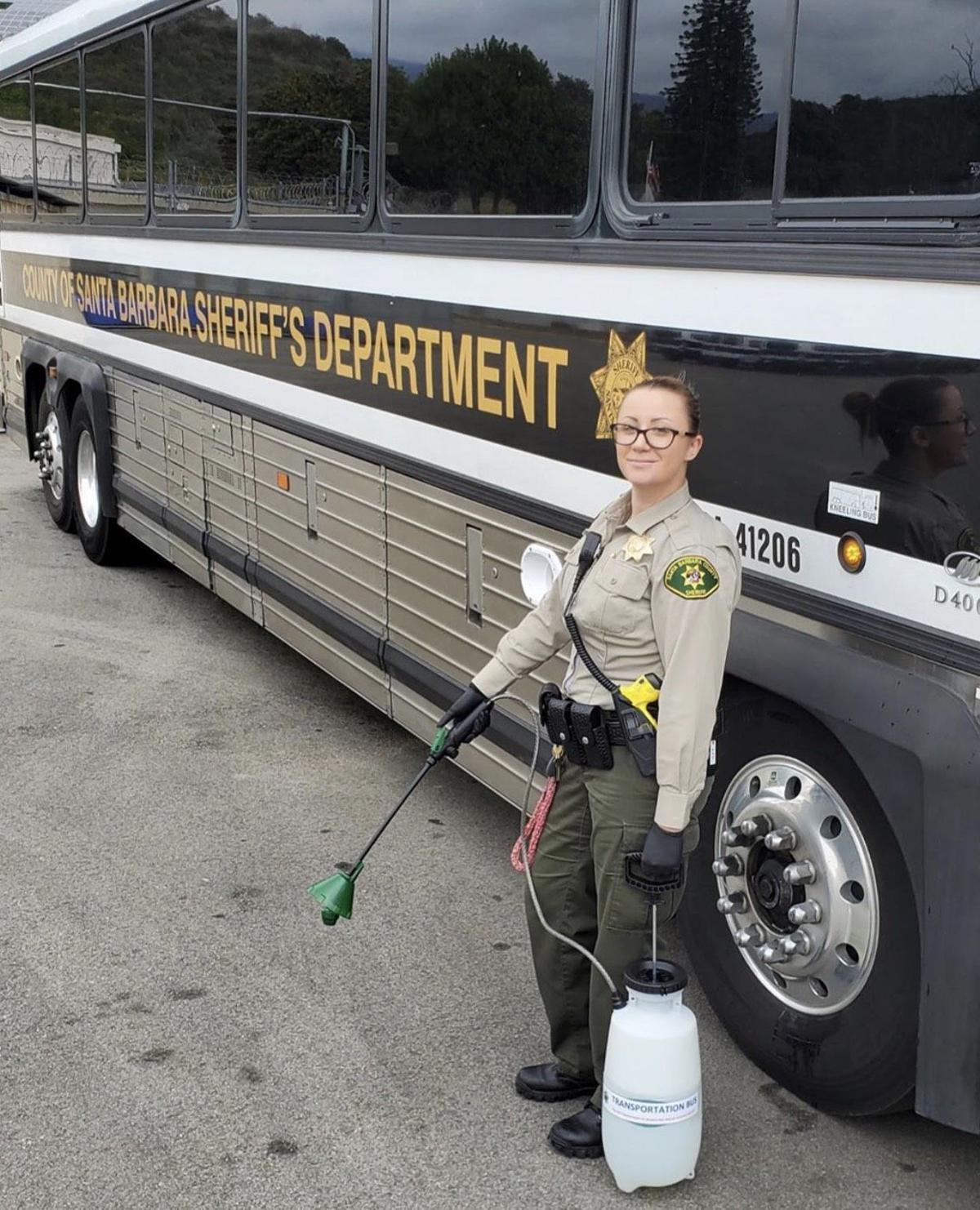 A Santa Barbara County sheriff's deputy stands by ready to disinfect an inmate transportation bus in an effort to prevent the spread of the coronavirus.

A Central Coast attorney who tested positive for COVID-19 and at least a dozen Santa Barbara County Sheriff's employees are in self-isolation following two separate exposure incidents, according to a sheriff's spokeswoman.

The Sheriff's Office on Tuesday notified the public that 12 of its employees — four custody deputies, a general services employee, two contracted Wellpath Healthcare employees and five civilian sheriff's employees — came in close contact with a colleague infected with the coronavirus on March 12, according to spokeswoman Raquel Zick.

The patient, a civilian jail employee and resident of San Luis Obispo County, recently returned from Europe and sought medical attention after becoming ill at work. The employee later tested positive for the coronavirus and now is under self-quarantine, Zick said.

All 12 employees were evaluated by medical staff and did not show symptoms but were, nonetheless, told to self-isolate at home by local health officials.

In an unrelated incident, a San Luis Obispo County-based attorney who became ill after working in a Santa Maria courtroom on March 12 has tested positive for the coronavirus, according to Zick.

Those who were present in the courtroom on the same day, including a sheriff's bailiff, showed no symptoms but were instructed by the court to seek medical evaluations.

Following evaluation, the bailiff was told to self-isolate.

The attorney's client, a defendant who is an inmate at the Santa Barbara County Mail Jail, and another inmate who shared the same jail cell were both rehoused in a negative-pressure location, or cell that allows air in but not back out, Zick said.

Both inmates showed no symptoms, but their housing area was thoroughly cleaned and disinfected, and they will continue to be monitored by jail medical staff.

In an effort to limit exposure to the virus, sheriff's officials have taken several steps.

For several weeks, jail staff have used a screening procedure recommended by the Centers for Disease Control and Prevention when booking inmates, including asking questions regarding travel, known contact with a positive coronavirus case and taking the person's temperature, Zick said.

Inmates and staff were advised by sheriff's officials to "stay healthy" by frequently cleaning touched services, washing hands with soap and water, social distancing when possible, and covering coughs and sneezes.

Patrol deputies have been issued personal protection equipment, and jail staff have an inventory available if suspected or confirmed cases arise.

If an inmate tests positive for the coronavirus, jail staff will isolate that individual.

In the case of a suspected COVID-19 death, sheriff's officials have received information from the International Association of Chiefs of Police about how to respond, according to Zick.

St. Mary of the Assumption

This is a list of the top active warrants put out by the Santa Barbara County Sheriff's office as of June 1, 2020.

A Santa Barbara sheriff's deputy disinfects a holding cell in an effort to prevent the spread of the coronavirus.

A Santa Barbara County sheriff's deputy stands by ready to disinfect an inmate transportation bus in an effort to prevent the spread of the coronavirus.