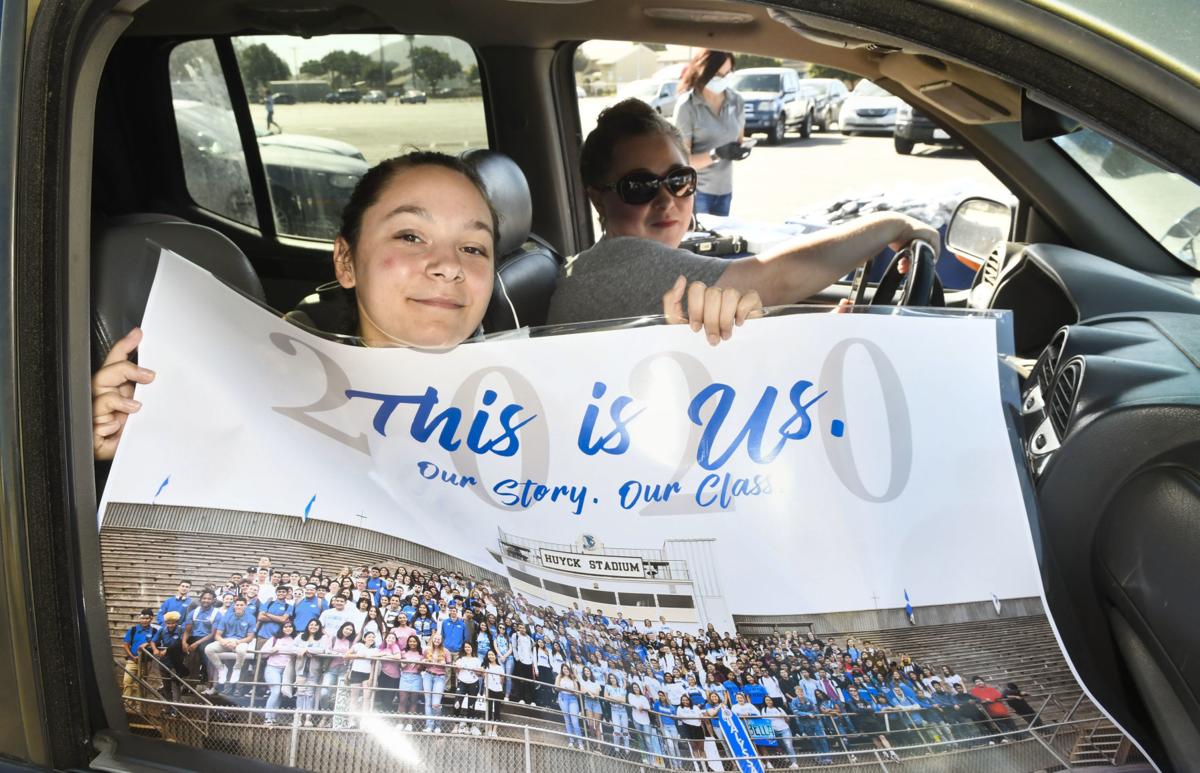 Anna Tanalski shows off her class photo as she and Lompoc High School's class of 2020 were honored during a drive-through celebration on campus last week. 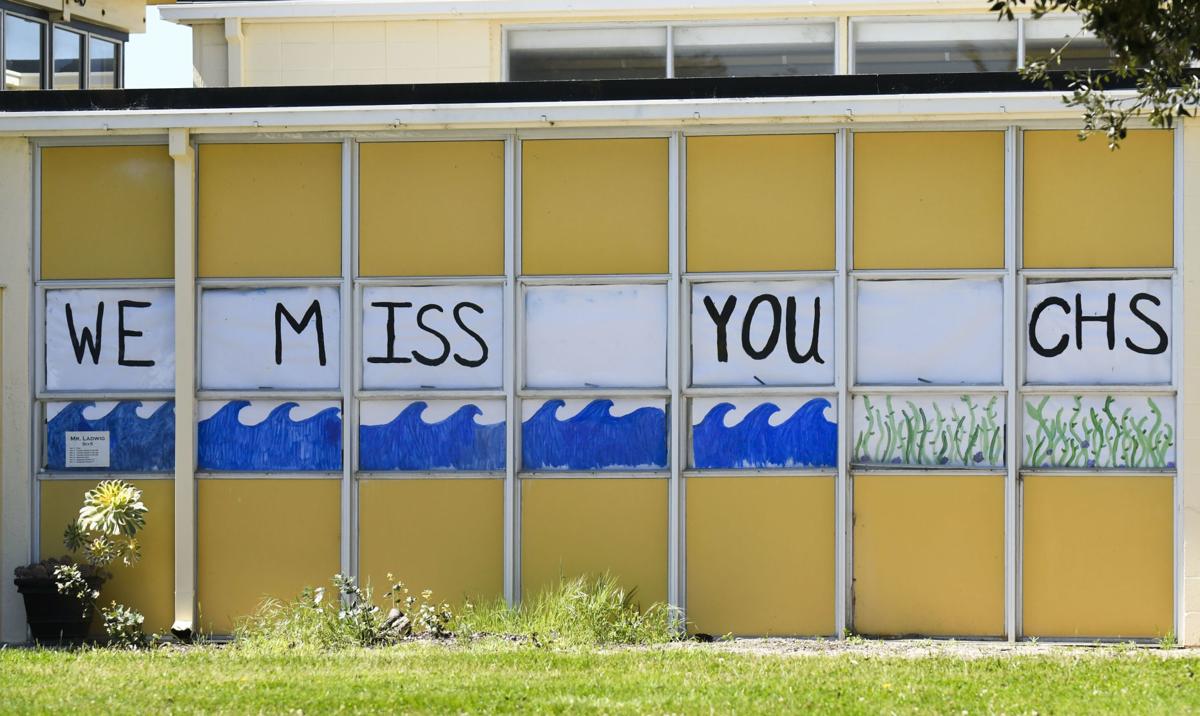 A sign at Cabrillo High School says "WE MISS YOU CHS." 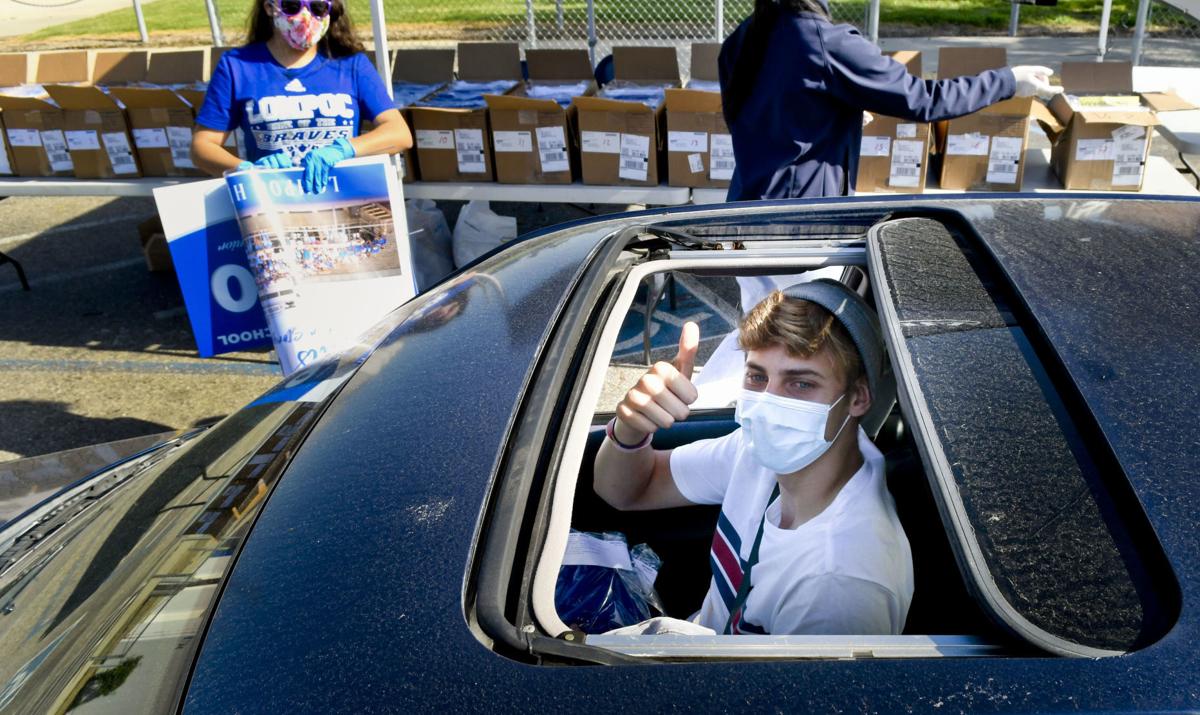 A member of Lompoc High School's class of 2020 gives a thumbs-up as he receives his graduation cap and gown during a drive-through celebration on campus last week.

The plan includes contingencies that, depending upon the status of the coronavirus crisis, could see the implementation of “drive-through” or “drive-up” celebrations in June, with in-person ceremonies to follow in August or later.

“Although we wish our world could go back to ‘normal’ and our graduation ceremonies would go on as originally planned, we feel it is essential to plan for our students and families and commit dates to this very important milestone,” read a portion of a statement from the committee. “We are proud of our students, families and community members, and we know that together we can get through these challenging times.”

The survey results, which were reviewed by the committee members, indicated that students and families wanted more than just a virtual celebration, according to the committee.

Lompoc High School thanks, congratulates Class of 2020 with gym mural

Principal Paul Bommersbach began work late last week on a mural on the southern wall of the Lompoc High gym that includes the names of the 360 members of this year’s senior class, as well as a couple messages of support for the class. That move is in addition to a large banner that the school has begun publicly displaying around the city to congratulate the class on its accomplishments, despite what turned out to be an abbreviated final year.

If the Santa Barbara County Public Health Department lifts the shelter-at-home restrictions by May 21 and allows public gatherings, LUSD leaders intend to proceed as scheduled with a graduation ceremony for students at Maple High School on June 3, and ceremonies for Lompoc and Cabrillo High schools on June 4. Social distancing measures would be put into place.

Under that latter scenario, each school would provide graduates and their families with details on what those social distance ceremonies would entail, according to LUSD.

If those mobile celebrations are implemented, they could be followed by in-person gatherings in August or even later in the year.

If the public health guidelines allow for public gatherings by July 31, according to the district, Maple, Lompoc and Cabrillo high schools would each hold in-person ceremonies on Aug. 14 with social distancing measures in place.

If the county does not allow for public gatherings by July 31, the LUSD Graduation Committee reported that it will announce a “future date for an in-person graduation as soon as possible.”

The date of the public health restrictions being lifted is key so that graduates and their families will have enough time to prepare.

“LUSD recognizes that families need to know potential dates ahead of time for planning and family travel purposes for any in-person graduation ceremony and need to have clear, timely communication about the guidelines and restrictions,” read the statement from the committee.

Whenever the in-person ceremonies are held, LUSD reported that all attendance requirements will be in accordance with state and county health recommendations and will be publicized at least two weeks in advance of each respective ceremony.

The LUSD Graduation Committee is comprised of staff from each of LUSD’s five high school diploma programs — Lompoc, Cabrillo and Maple high schools, as well as the Bob Forinash Community Day School and the Lompoc Adult School and Career Center — plus administrators from the district office.

The division recently launched its Virtual Recreation and Resource Center at www.cityoflompoc.com/recreation. The site includes resources, classes and activities broken into age-appropriate groups. Classes taught by Lompoc recreation instructors are featured alongside other video resources.

About 200 families participated in the event, and many of the attendees became emotional, according to Manzanita Principal Suzanne Nicastro.

'I really miss being in the classroom': Lompoc teacher still connecting with students

The series “Our neighbors: Living through a pandemic” is a collection of short vignettes highlighting the struggle and the hope of residents quarantined on the Central Coast. Through their stories it becomes clear that we really are facing the coronavirus together.

Thanks to some of the COVID-19 business restrictions being relaxed on Friday, many Lompoc retailers have spent the past several days reopening their shops and preparing for what could be a critical return to business.

'Hanging in there': Lompoc Flower Festival Queen Contest presses on with 8 candidates vying for crown

The 2020 Lompoc Flower Festival Queen Contest is pushing on, despite the Lompoc Valley Festival Association’s decision last month to call off this summer’s Flower Festival. The eight young ladies vying for the queen’s crown have continued to fundraise during the health crisis, and contest organizers have tentatively scheduled a couple of public events to recognize the candidates.

With an eye on reopening classrooms in the fall, LUSD officials are encouraging parents to provide feedback through a six-question "School Reopening 20-21 Parent Survey" at lusd.org.

Each of LUSD’s four diploma-issuing institutions — Lompoc, Cabrillo and Maple high schools, plus the Lompoc Adult School and Career Center — will host small celebrations over the next week that will offer opportunities for graduates to walk across their school’s respective stage.

Anna Tanalski shows off her class photo as she and Lompoc High School's class of 2020 were honored during a drive-through celebration on campus last week.

A sign at Cabrillo High School says "WE MISS YOU CHS."

A member of Lompoc High School's class of 2020 gives a thumbs-up as he receives his graduation cap and gown during a drive-through celebration on campus last week.