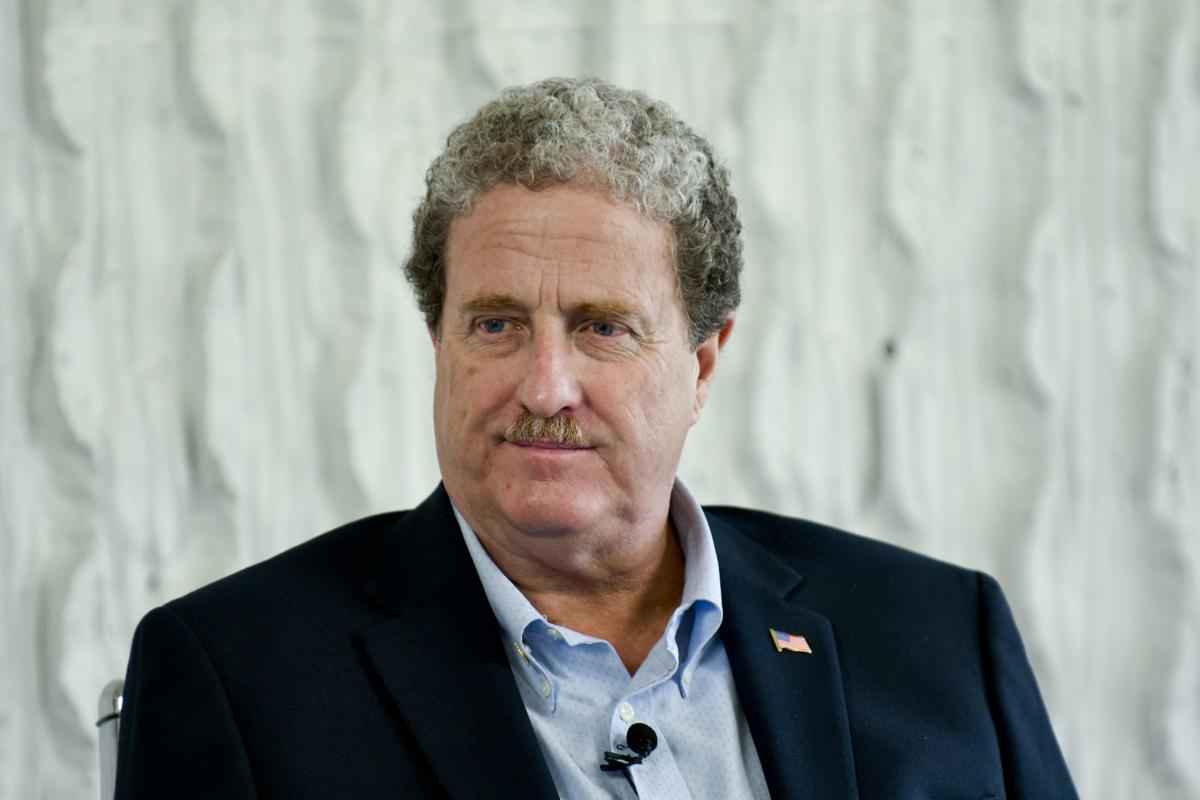 Republican Andy Caldwell of Santa Maria, who is challenging Democratic incumbent Salud Carbajal for the 24th Congressional District seat in the House of Representatives, listens to a question about his position on a national topic during an interview with editors at the Santa Maria Times. 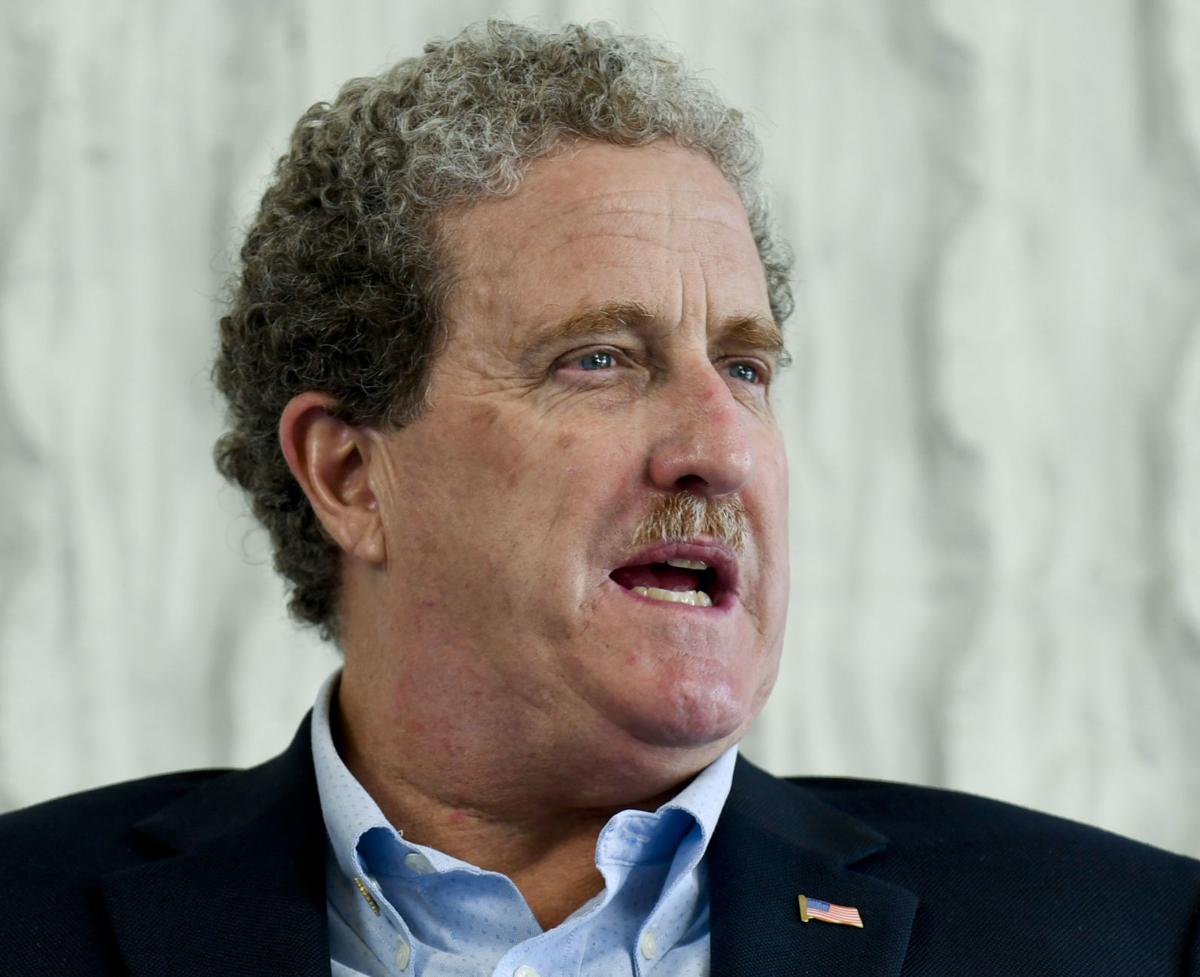 Andy Caldwell, Republican candidate for the 24th Congressional District seat currently held by Democrat Salud Carbajal, answers a question during an interview with editors at the Santa Maria Times. 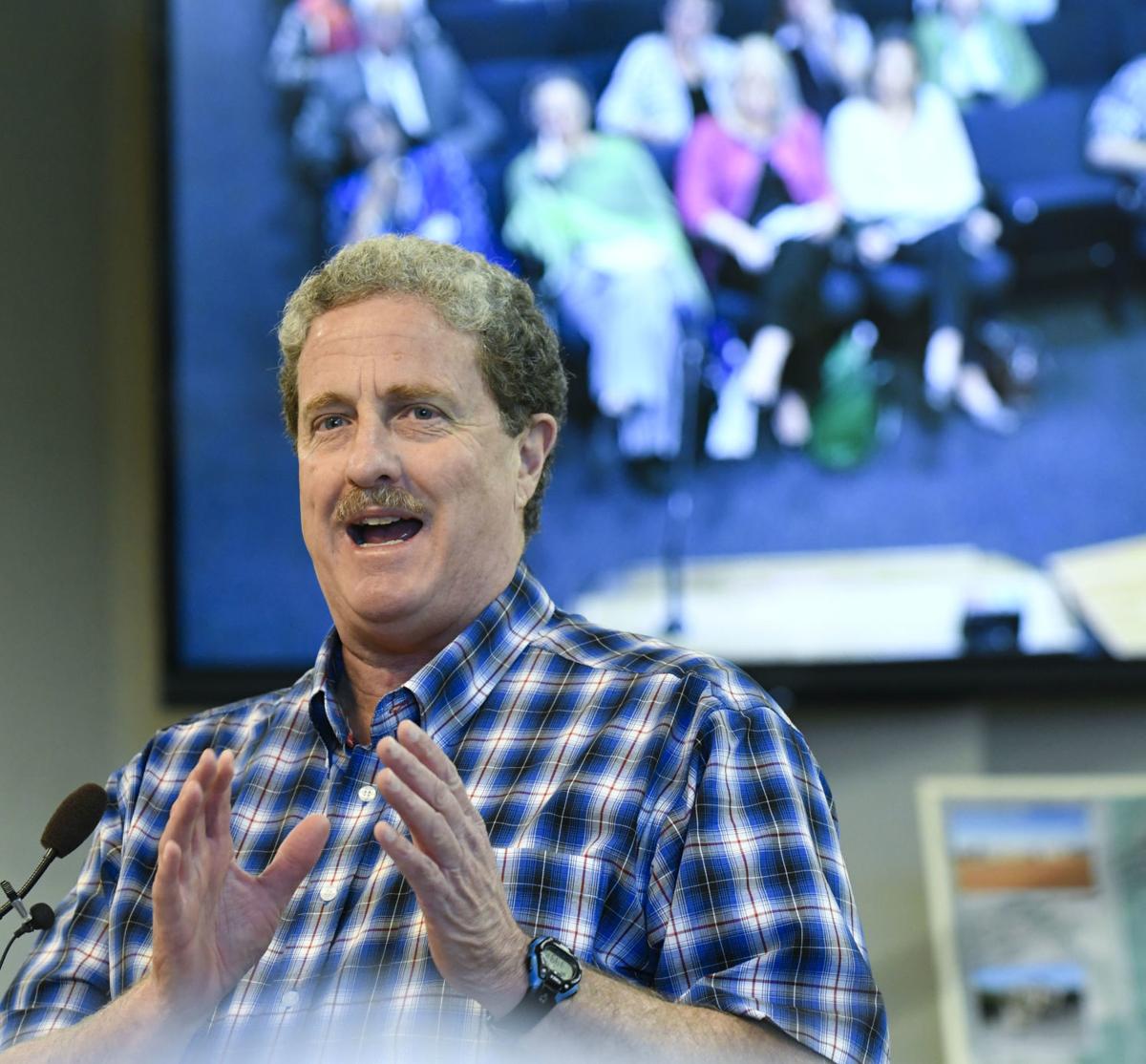 Andy Caldwell believes he can see government from both sides of the aisle. He spent half his life as a registered Democrat before becoming a Republican.

But Caldwell, who’s challenging incumbent Democrat Salud Carbajal for his 24th Congressional District seat in the House of Representatives, said he doesn’t believe either party is serving the needs of the people any longer. The district encompasses Santa Barbara and San Luis Obispo counties, and parts of Ventura County.

Instead of toeing the party line, Caldwell said if he’s elected to the 24th District seat he’ll represent his constituents and vote for logical solutions to issues.

Andy Caldwell: A government watchdog vs. a career politician

“I’ve never been a party hack,” Caldwell said in a recent interview. “If the Republicans do something stupid I say it and vice versa. This is a fundamental principle with me. I believe that congressional representatives should be representing the people, not the party, in the halls of Congress.

“So if they want to do party business, like get rid of their opponents, sabotage their opponents, they shouldn’t be doing that in the matter of course of congressional hearings and committees and things like that,” he continued. “They should be representing the district.

“And I believe we’ve got to bring that back, to that ideal of service. I haven’t seen that in a long, long time in this region.”

Caldwell, 61, has spent enough time in Santa Barbara County to assess the climate. He and his mother moved to Lompoc when he was 10. He graduated from Lompoc High School and earned a bachelor’s degree in social sciences from UC San Diego.

After college, he was a laborer at the Sinton & Brown Feedlot southwest of Santa Maria, then in 1988 became the industrial relations and safety manager at nearby Union Sugar.

He left the company in 1991 to found the nonprofit Coalition of Labor, Agriculture and Business, or COLAB, in Santa Barbara County and later helped similar organizations get started in San Luis Obispo, Ventura and Imperial counties.

A regular attendee at Santa Barbara County Board of Supervisors, Planning Commission and other government meetings, he frequently provides COLAB’s position on issues during public comment.

He said if he’s elected, he’ll give up his job as executive director of COLAB, but he would carry those same ideals with him to Washington.

Incumbent Democrat Salud Carbajal of Santa Barbara is being challenged for his 24th Congressional District seat in the House of Representatives by Santa Barbara civil engineer Kenneth Young, who has no party preference, and Republican Andy Caldwell, nonprofit organization executive director and self-described government watchdog from Santa Maria, in the March 3 Presidential Primary Election.

If none of the three receives a clear majority of all the votes — that is, more than 50 percent — then the top two vote-getters will move on to the General Election in November.

For complete information about the March 3 primary, visit the Santa Barbara County Clerk-Recorder-Assessor and Registrar of Voters website at https://countyofsb.org/care and click on “Elections,” then choose topics from the drop-down menus.

Caldwell said he’s a moderate when it comes to most issues, but there are a number of things he’s passionate about.

“I grew up relatively poor, so I want people to be upwardly mobile,” he said.

That’s why he’s a staunch advocate of providing more jobs and more well-paying jobs throughout the region for everyone from high school graduates to those with college degrees.

“And the bottom line is that government can either help or it can hinder that, and in most cases in our region, it’s been hindering it,” he said.

One of his goals if elected is to talk to the Vandenberg Air Force Base commander and the companies that are doing space launches and space-related work on the base about creating a campus inside Lompoc so the city can pick up the property tax revenues and attract higher-paying jobs.

The son of an immigrant, Caldwell has a moderate attitude toward immigration, knowing labor is important to local agriculture.

“I don’t believe in the principle or precept that you throw everybody out of this country that didn’t come here legally,” he said. “I would throw out the gangbangers and the felons, and I probably would not be very welcoming to people that come here to become government-dependent.

Video - Andy Caldwell: Neither party is serving the needs of the people

“Having said that, I recognize that many of these people, including ‘dreamers,’ may not have known any other country,” he continued. “And so I would not toss them out; however, they would have a tough row to hoe to citizenship.

Caldwell said he wants an immigration package deal that includes border security, expulsion of gang members and career criminals, a guest worker program and a path to legal residency and possibly citizenship.

“I’ve always been about policy, not politics,” Caldwell said. “My issue is principles, values, goals, and economic return and constitutional rights.”

So he wants to take a hard look at federal policies and eliminate those with unintended consequences, particularly one that has impacted Carpinteria.

Video - Andy Caldwell: With a diverse voter group spread over two counties, how do you plan to win?

But he said at one time, 10 percent of the nation’s cut flowers were grown in Carpinteria greenhouses until the Coastal Commission effectively blocked construction of new greenhouses in the Coastal Zone, dealing the industry a terrible blow.

Andy Caldwell and more than a dozen supporters hit the streets of Lompoc on Saturday, going door-to-door in an effort to win over voters in hi…

He said the death knell was sounded by the federal government’s policy allowing Colombia to export flowers to the United States duty-free in an effort to stem the flow of drugs from that country.

With its prices undercut, the cut flower industry began to collapse in Carpinteria, where the land runs $100,000 to $200,000 an acre and covering that cost requires a high-value crop.

Then California legalized cannabis, which has now replaced cut flowers in Carpinteria greenhouses never built to contain an odor like that given off by cannabis.

“I never thought growing up on the Central Coast we’d get our flowers from Colombia and our drugs from Carpinteria,” Caldwell said. “And you know what? They’re still growing drugs in Colombia.

“So first thing I’m going to do, I’m cutting that export free-duty clause that they’ve got — if I can pull that off as a freshman or what have you — maybe flowers can compete in Carpinteria with cannabis again.”

On other issues, Caldwell said halting the meteoric rise in the national debt and then paying it down it is a priority.

Caldwell said he won’t support eliminating private health insurance but will use market strategies to drive down the cost of health care and prescription drugs.

He wants to increase water storage to protect against droughts, prevent rationing and hold down costs, and he wants to repair and maintain the nation’s crumbling highways, roads and bridges.

Caldwell said he feels compassion for the homeless, but he’s seen the crime that spilled over into Lompoc from the encampment in the Santa Ynez River, where some people had lived for decades, building shacks and tunneling into the riverbank.

He said he’ll offer help to those willing to help themselves but will protect communities from the negative impacts of concentrated homeless populations.

Poll workers are desperately needed in Santa Barbara County for the March 3 Presidential Primary Election, and training for the volunteer positions is scheduled to start Tuesday.

Montecito roads that were ravaged first by a flow of rocks, trees, buildings, cars and mud, then by tens of thousands of trucks hauling away t…

A bill that would protect more than 279,000 acres of Central Coast wildlands was passed Wednesday by the House of Representatives, as a matchi…

Santa Barbara County will apply for approximately $4 million in state funds to provide housing and services to the homeless, including a progr…

Republican Andy Caldwell of Santa Maria, who is challenging Democratic incumbent Salud Carbajal for the 24th Congressional District seat in the House of Representatives, listens to a question about his position on a national topic during an interview with editors at the Santa Maria Times.

Andy Caldwell, Republican candidate for the 24th Congressional District seat currently held by Democrat Salud Carbajal, answers a question during an interview with editors at the Santa Maria Times.