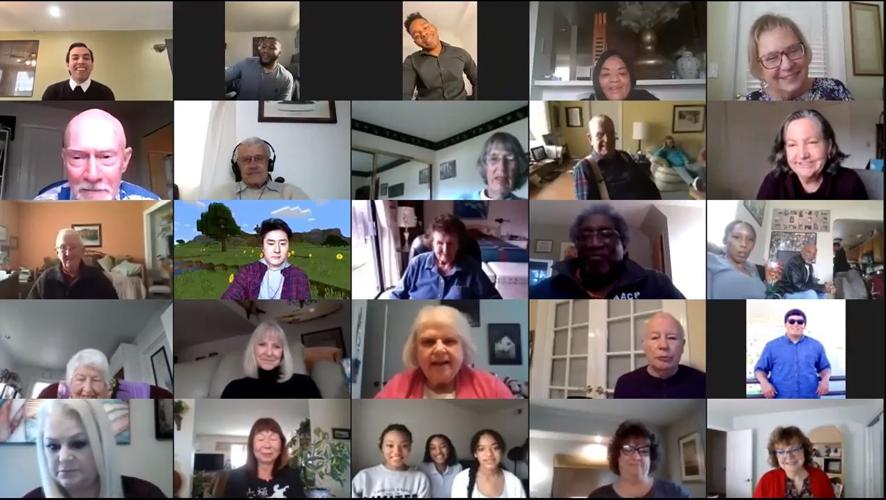 The 11th annual Lompoc Valley of the Flowers Peace Prize ceremony was held via Zoom on Jan. 31. Five Lompoc Black Lives Matter community leaders were named winners of the prize for organizing and delivering one of Lompoc's largest peaceful demonstrations for social justice. Three were present at the ceremony including, from top left, Anthony Vickery, Keith Joseph and Jason Bryson. 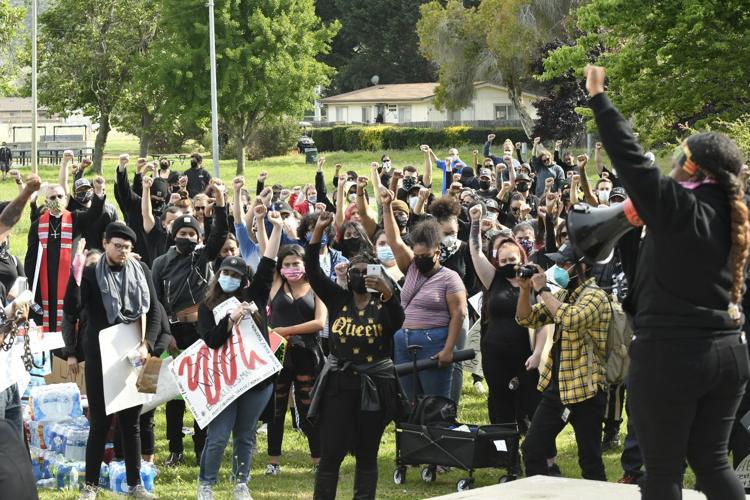 A crowd gathers in Lompoc the evening of June 2 to protest the death of George Floyd. 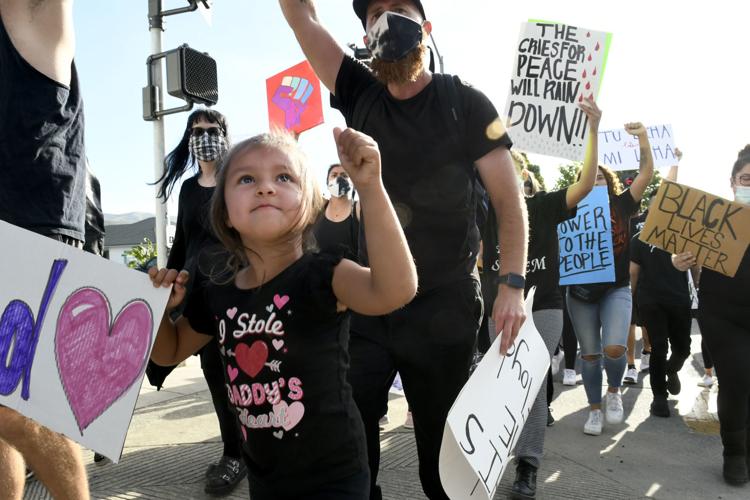 At least 400 people took part in a Lompoc protest on June 2 to demand an end to racial injustice and police brutality. 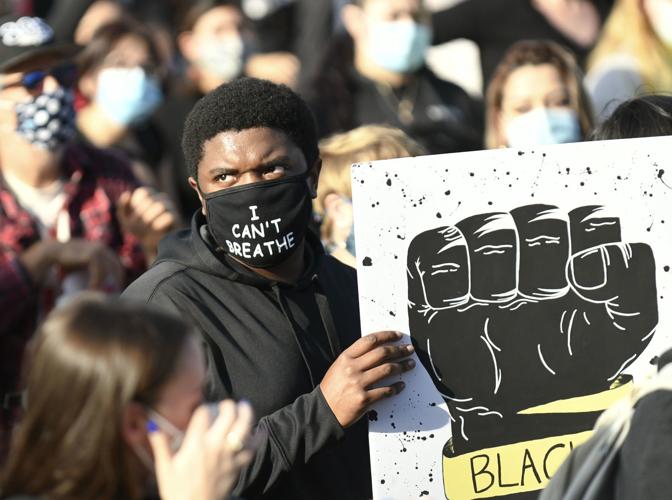 Hundreds of Lompoc community members of various races and backgrounds joined together on June 2 in a powerful show of unity for a peaceful protest to demand an end to racial injustice and police brutality. 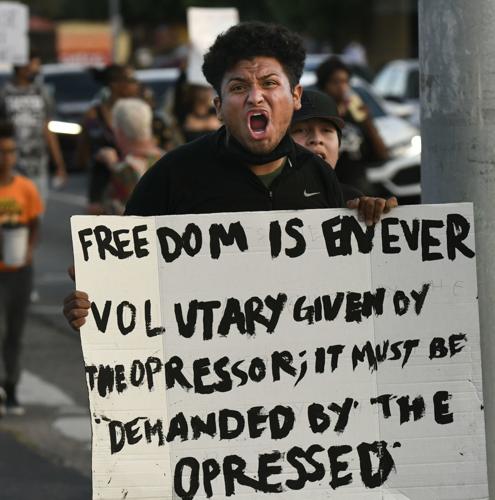 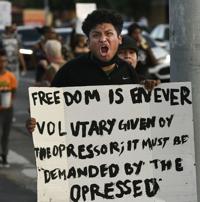 With many of the marchers carrying signs in support of the Black Lives Matter movement and basic human rights, the energized crowd in Lompoc made its way from Ryon Park to the Lompoc Police Station and then up the entire span of North H Street before concluding back at Ryon Park on the evening of June 2. 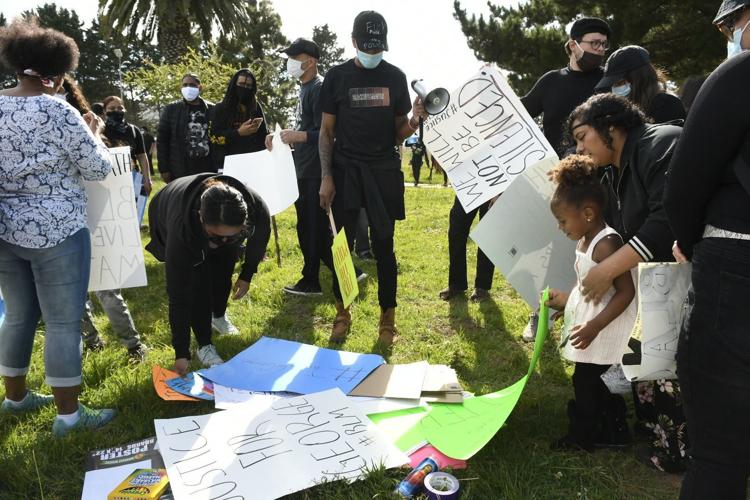 Protesters work with signs in Lompoc during a protest June 2 against police brutality stemming from the death of George Floyd in Minnesota.

The 11th annual Lompoc Valley of the Flowers Peace Prize ceremony was held via Zoom on Jan. 31. Five Lompoc Black Lives Matter community leaders were named winners of the prize for organizing and delivering one of Lompoc's largest peaceful demonstrations for social justice. Three were present at the ceremony including, from top left, Anthony Vickery, Keith Joseph and Jason Bryson.

A crowd gathers in Lompoc the evening of June 2 to protest the death of George Floyd.

After the killing of George Floyd last May, more than 800 Lompoc community members marched from Ryon Park to the Police Department and back, peacefully protesting and demanding an end to racial injustice and police brutality.

"It was a crazy time," said Joseph, addressing more than 50 community members who attended the hourlong award ceremony via Zoom. "After the George Floyd incident, it just sparked a lot of emotion in people, I believe. Especially in Anthony, Rae, Jason and me."

The five leaders named, Anthony Vickery, 21, Kongie Richardson, Keith Joseph, 24, Raelyn Person, 23, and Jason Bryson, were responsible for organizing one of Lompoc's largest demonstrations for social justice following the killing of George Floyd, an unarmed Black man who died after a Caucasian police officer in Minneapolis knelt on his neck for more than eight minutes on Memorial Day.

The death of Floyd, an unarmed Black man who died after a police officer in Minneapolis knelt on his neck for more than 8 minutes on Memorial Day, sparked a national response that also shook Lompoc.

The June 2 protest, which drew hundreds of participants from various racial, religious and political backgrounds, remained peaceful, according to officials, who reported that no vandalism occurred.

Both Joseph and Vickery, on behalf the their group, thanked prize sponsors Valley of the Flowers United Church of Christ, and Vickery acknowledged all the nominees for their own community outreach and acts of kindness.

"It goes beyond the award just knowing that the community can come together when it wants to," Vickery said. "Everybody is so scared to make that change, but once one person does it, it's like a ripple effect. Things can happen."

Joseph explained that although brutality is nothing new, for him the death of Floyd took more time to process.

"To watch someone die slowly on camera," Joseph said, "that one was different."

In contrast to focusing on Black lives solely, Joseph said the group's efforts were meant to benefit the community as a whole and serve as a powerful reminder that the nation's not-too-distant history was plagued by racial segregation.

While the aim to improve mental health resources for local schools remains central to his campaign, Murkison, who is Black, said he also hopes to cast a wider net on youth representation and diversity while serving on the school board.

"We just spoke from the heart," he said, recalling the intensity of the protest and the many challenges of organizing it. "It wasn't just Black lives; it's just wanting to help the community."

The award was given to the Lompoc Black Lives Matter group by Yasmin Dawson, last year's prize winner who in 2019 organized a community march and rally attended by hundreds in the wake of seven reported homicides in the city.

Prior to naming the winners, Dawson greeted attendees with "As-salamu alaykum" — or "Peace be upon you" in Arabic — and acknowledged the efforts of all nominees.

"A year ago, when I accepted the award, I had no idea how much my life would change," said Dawson, looking behind her at the 2-foot-tall, 24-pound Peace Prize sculpture made of copper, walnut and ceramic that is passed to winners annually. "I can think of no better time to hold up the Peace Prize in a year where there has been so much division."

Community members communicated their agreement, clapping quietly or waving both hands by the sides of their heads.

"One could get dispirited by the never-ending darkness that seems to accompany 2020, particularity when watching COVID-19 ravage communities of color and others. But we are stronger together," Dawson continued. "Let us not leave here separately but leave here committed to building together. We have so much talent in our tight-knit community."

Despite some technical glitches early on, the Rev. Jane Quandt, pastor of the prize sponsoring church in Vandenberg Village, led the virtual ceremony with diligence and humor. She tapped members of the church to recognize each nominee and share about that nominee's story of activism.

The Sunday ceremony also included an appearance by Mayor Jenelle Osborne, a reading of quotes about peace and vocal performances by the Simmons Sisters.

Quandt said in the absence of a traditional in-person ceremony, the congregation was grateful "that we can at least gather together here to acknowledge the work of a few of the outstanding people of Lompoc."

Taking an excerpt of "The Hill We Climb," a piece written and read by poet Amanda Gorman at the 2021 presidential inauguration, Quandt read, "We've learned that quiet isn't always peace, and the norms and notions of what just is isn't always justice."

Quandt applauded all nominees for working to make Lompoc a more peaceful and just place to live.

"All of the nominees of the Peace Prize have each, in their own way, been willing to make some noise on behalf of peace," she said.

Azyiah, Amia and Maliah Simmons, each of whom attended Lompoc High School in the 2019-20 school year, earned the nomination for their music video, which they created for a performing arts competition sponsored by EduHam, an educational spin-off of the hit Broadway musical Hamilton. The girls were featured on "Good Morning America" this summer for their efforts.

Veronica Williams, founder of Stand 4 One, a local grassroots nonprofit with a mission to support and empower Santa Barbara County youth, has …

Local tai chi instructor Yuka Freeman has been recognized as the third nominee for the 11th annual Lompoc Valley of the Flowers Peace Prize, f…

As the pandemic restrictions impacted businesses in Santa Barbara County, Back Porch Flowers and Gifts owner Huong Hopp was forced to lay off …