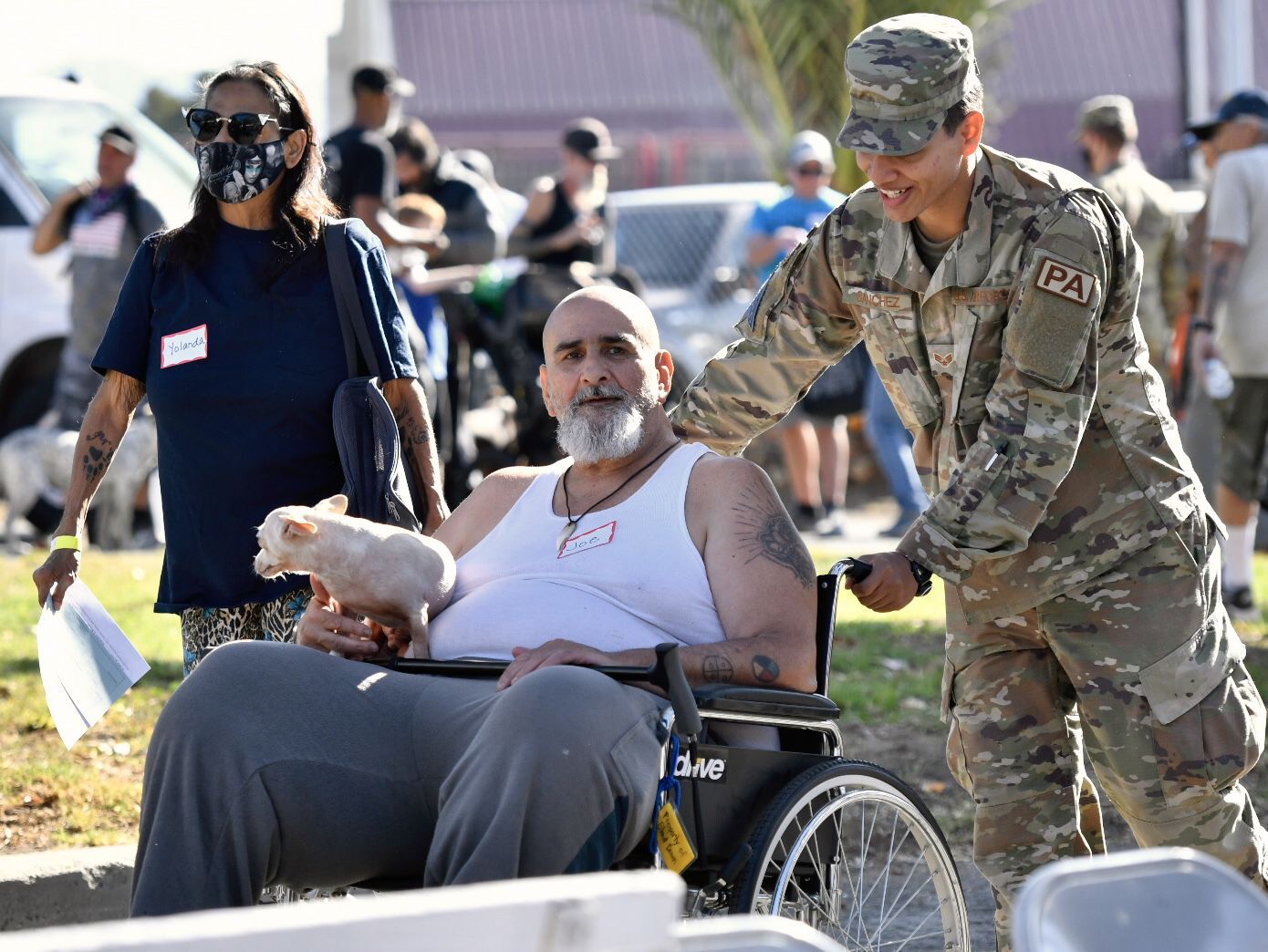 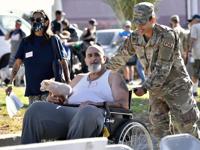 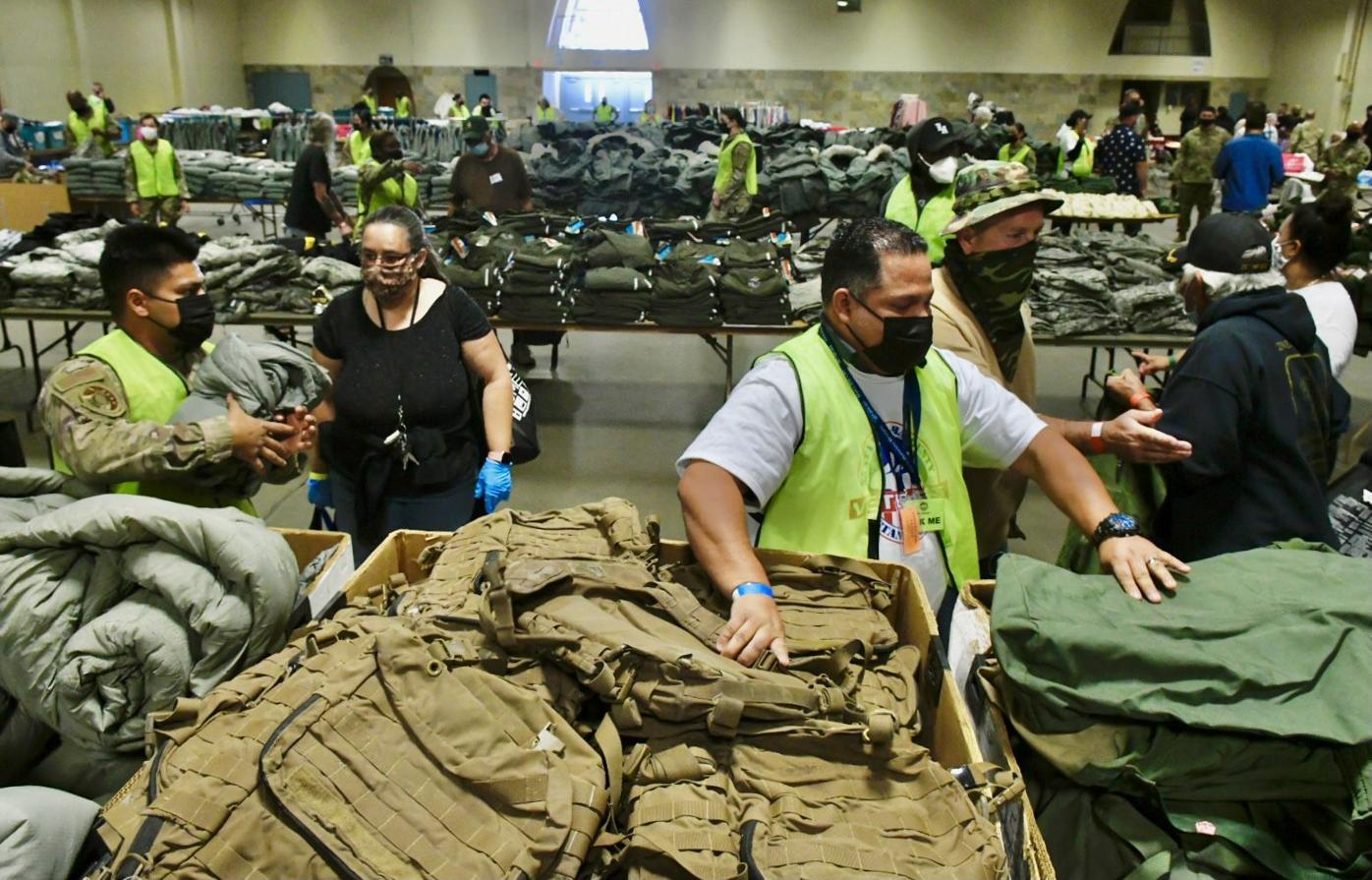 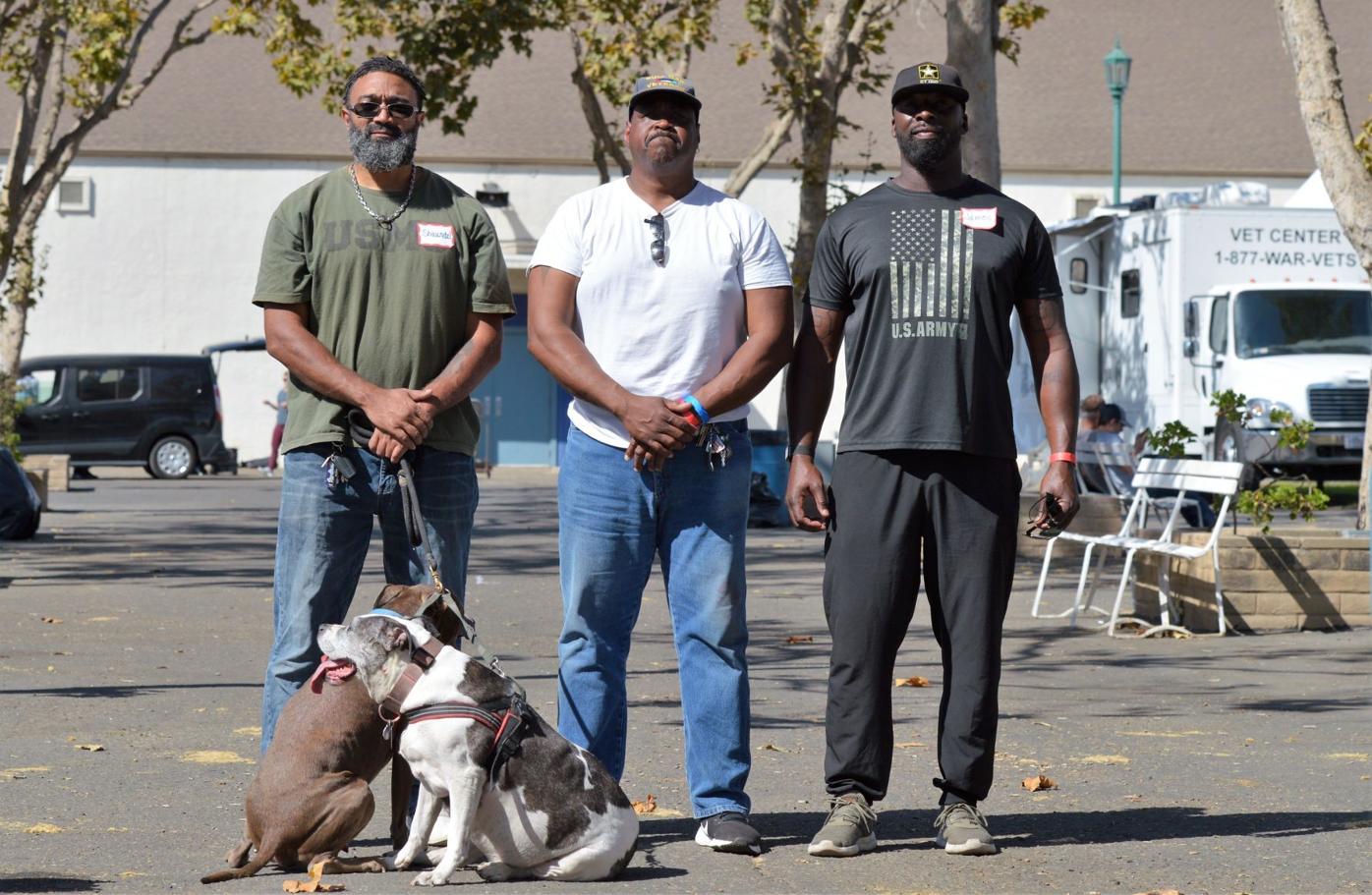 From left, Shawndel Malcolm, with his dogs, Isaiah Toran and James Jones attend the Santa Barbara County Veterans Stand Down at the Santa Maria Fairpark on Saturday. Malcolm served in the Marine Corps, while Toran and Jones served in the Army. 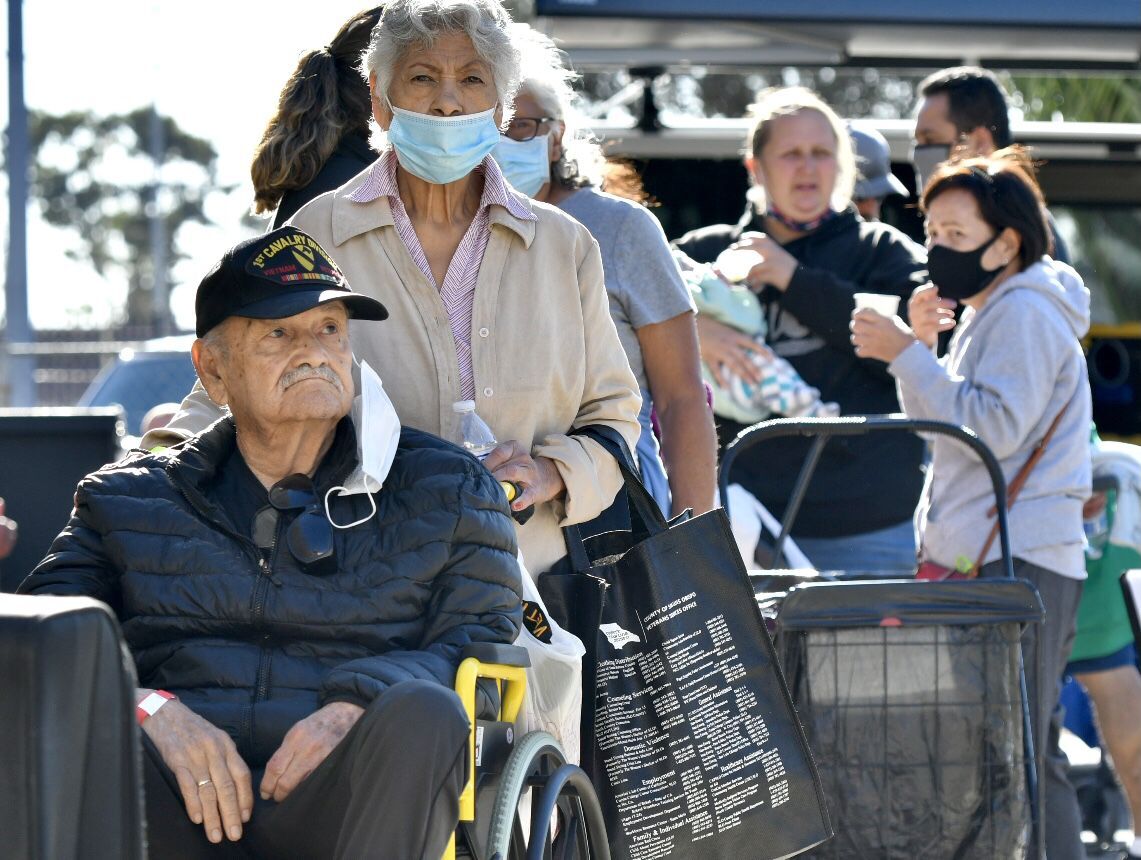 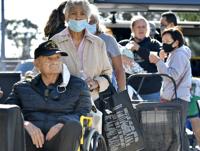 Vietnam veteran Heraclio Lara, 81, waits in line with his wife, Rufina, at the Santa Barbara County Veterans Stand Down on Saturday. 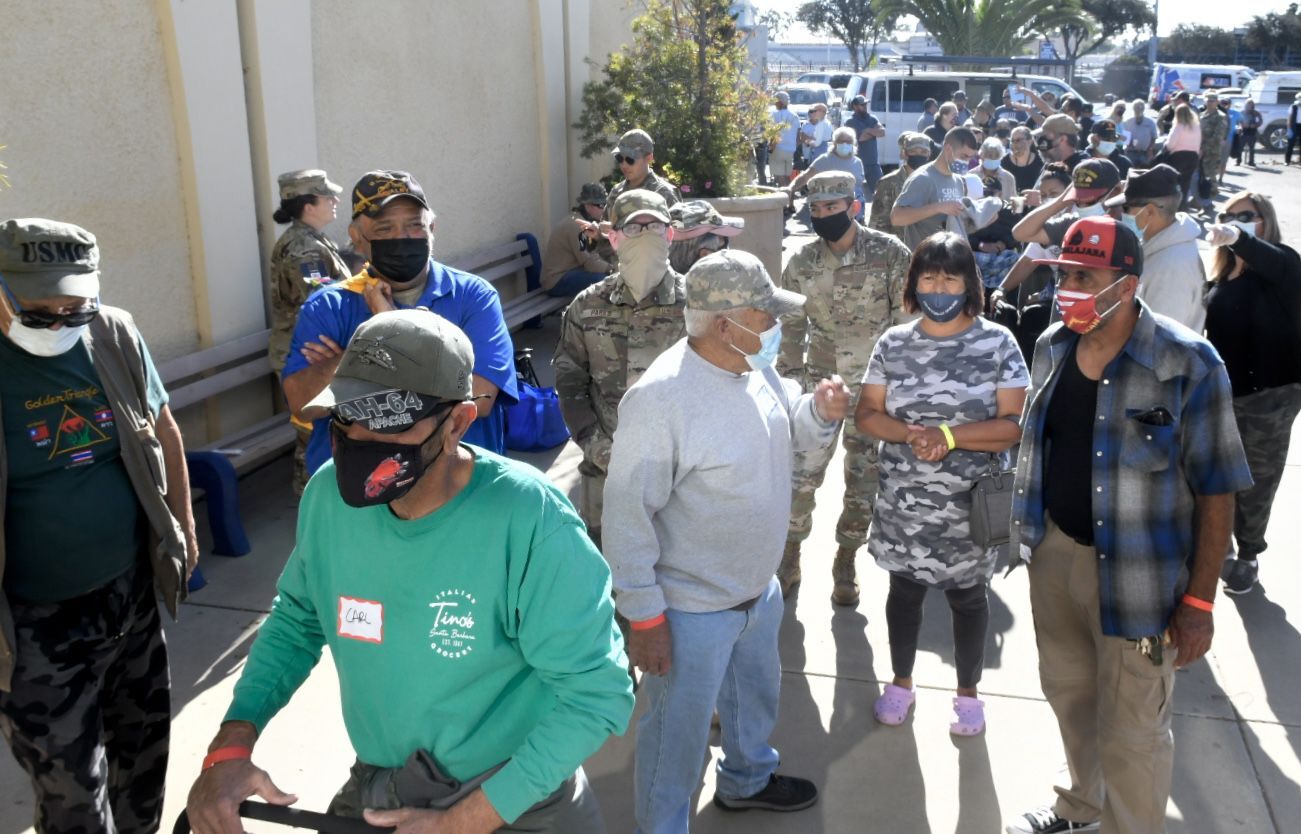 Veterans and family members wait at the Santa Maria Fairpark on Saturday during the Santa Barbara County Veterans Stand Down.

From left, Shawndel Malcolm, with his dogs, Isaiah Toran and James Jones attend the Santa Barbara County Veterans Stand Down at the Santa Maria Fairpark on Saturday. Malcolm served in the Marine Corps, while Toran and Jones served in the Army.

Vietnam veteran Heraclio Lara, 81, waits in line with his wife, Rufina, at the Santa Barbara County Veterans Stand Down on Saturday.

Veterans and family members wait at the Santa Maria Fairpark on Saturday during the Santa Barbara County Veterans Stand Down.

Current and former military service members arrived at the Santa Maria Fairpark early Saturday for the Santa Barbara County Veterans Stand Down, which was held in person this year after a drive-through event last year due to COVID-19.

When the Stand Down returned this year, two things were noticeably different, according to 5th District Supervisor Steve Lavagnino, one of the event’s organizers: coronavirus protocols and less veterans.

Lavagnino attributed the possibility of recent events for the lower turnout, but added the need hasn’t completely gone away.

“The numbers might have been down a little bit because of COVID and the Alisal fire,” Lavagnino said. “The goal at the end of this is to have nobody be here anymore.”

The Santa Barbara County Veterans Stand Down is an annual event that brings together donations and service providers from across the region for local veterans in need. The first event was held in 2012.

This year's Stand Down ran from 9 a.m. to 1 p.m. and provided homeless and at-risk veterans with hot food, access to services, clothing and hygiene items.

More than 100 local providers for social services, including nonprofits, offered to homeless and at-risk veterans attended, with most setting up booths outside as a measure to prevent coronavirus spread, according to Lavagnino.

Additionally, measures such as mask-wearing and physical distancing were in place.

Volunteers, including active-duty Space and Air force personnel from Vandenberg Space Force Base, arrived on scene early to help veterans and assist Sandy Agalos, director of the Stand Down and who Lavagino credits as the “heart and soul” of the event.

“I give her ideas and she makes it happen,” Lavagnino said.

Veterans shuttled in from across the county and locally, including 59-year-old Scott Green, a Picayune, Mississippi, native and Marine Corps veteran.

Green, who is currently staying at the Good Samaritan Shelter in Santa Maria, said the Stand Down wasn’t “as good as it used to be” but praised the volunteers for their time.

“This is their weekend,” said Green, who served as an aviation ordnanceman. “Having them be here all day, it’s a commitment.”

Stand Down attendees also included 66-year-old Ed Saylor, a Pennsylvania native and a CH-47 helicopter flight engineer for the Army. He served from 1973 to 1981 and met his wife, a “beach girl” named Karolyn.

When asked which Army story he likes sharing with people, Saylor recalled a time in 1980 when he and his wife flew with a helicopter squadron somewhere over Germany and it was snowing heavily.

They had to “park” on the side of a mountain and Saylor was the one who had to direct the rest of the squadron through the storm. He jumped out of the aircraft and landed in snow up to his chest.

“The guys were laughing because they all thought I looked like a walrus waddling through the snow,” Saylor said.

In addition to the services, Malcolm said the Stand Down is important to veterans because it's where many seek and find support among their peers.

"We don't see each other's scars, but once you begin talking, you see their wheels turning," Toran said. "It's like, 'hey bro, let's talk.'"

It was the first time at the Stand Down for Jones, who said it was nice to see that veterans are supported.

"I think everybody got what they needed here," Jones said. "They checked all the boxes."