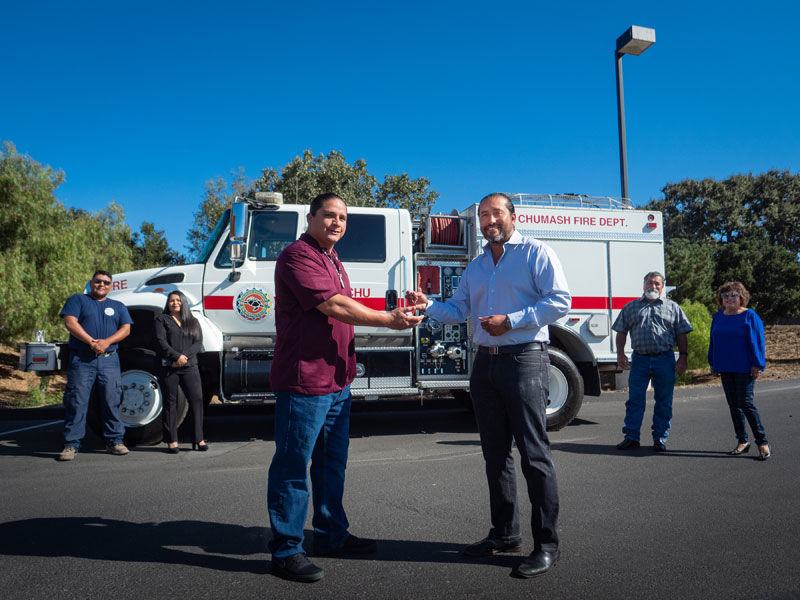 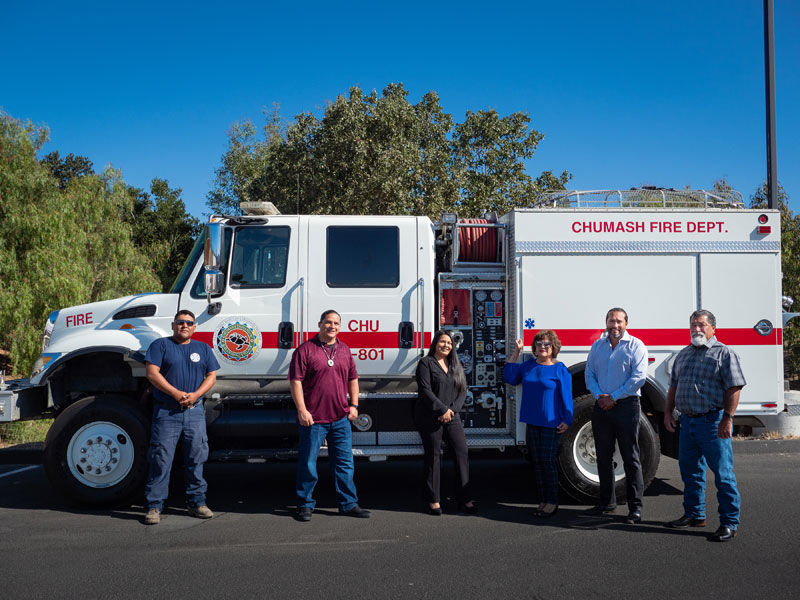 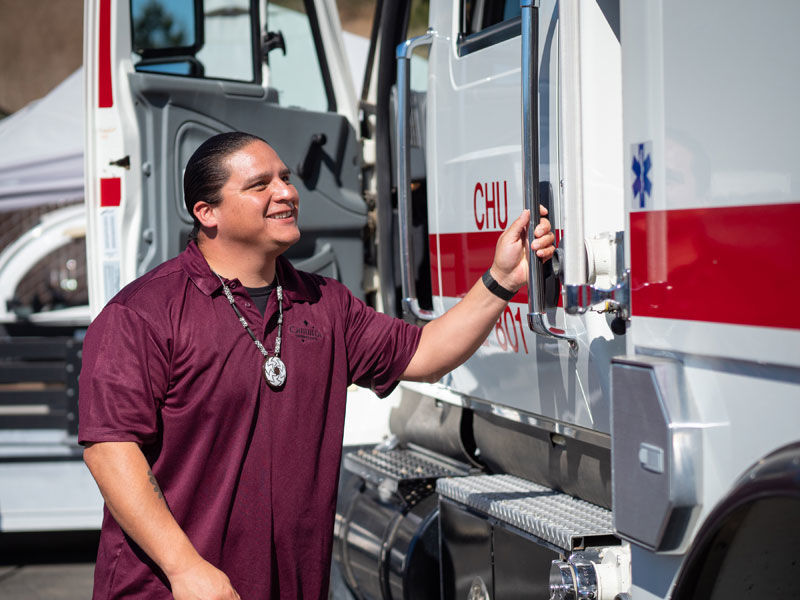 Daniel Salgado, tribal chairman for the Cahuilla Band of Indians, inspects his tribe's new Type 3 fire engine, which is designed to fight brush fires and was donated by the Santa Ynez Band of Chumash Indians.

The Santa Ynez Band of Chumash Indians recently extended a helping hand to another tribe by donating a Type 3 fire engine to the Cahuilla Band of Indians Fire Department of Southern California.

Having battled fires in Riverside County — including the 2018 Cranston fire that charred more than 13,000 acres — the Cahuilla Fire Department, based in Anza, was reportedly faced with growing needs.

Kenneth Kahn, tribal chairman of the Santa Ynez Band of Chumash Indians, said when they learned Cahuilla needed an engine, they were called to answer.

The Type 3 engine, which holds 500 gallons of water and has driven 100,000 miles fighting fires throughout the United States over the past 12 years of ownership, was purchased for the Chumash Fire Department in 2007, a year after the department grew from a hand crew into an engine company.

"The truck still performs well and holds significant value on the resale market," Kahn said of the engine, which is valued at $130,000. "But helping another tribe advance its own fire department by donating a critical vehicle felt like the right thing to do.”

In September, leadership members of the Cahuilla Tribe visited the Chumash reservation to pick up their new vehicle.

The Chumash Fire Department currently has six full-time employees, up to 10 seasonal employees and two engines in its fleet.

In 2017 alone, the Chumash Fire Department was ordered to more than 100 fires in 10 states, including assignments as far away as Florida.

“A donation like this, one that is primarily focused on the preservation of life, means so much to us right now, and in the time of emergency, it will mean the world to those it saves,” said Daniel Salgado, tribal chairman for the Cahuilla Band of Indians. ”This gift will help us preserve life so we can continue carrying on these traditional values and someday return the blessing or carry it forward to the next people in need.”

Through an agreement with the Bureau of Indian Affairs, both the Cahuilla and Chumash fire departments respond to fires throughout the United States.

Members of the public can experience California-style Native American singing and dancing Saturday at the 13th annual Chumash Culture Day, which is free and open to all ages.

The Santa Ynez Band of Chumash Indians has announced a $100K matching grant to support the 45-year-old Solvang Theaterfest's renovation project. The theater's $4.7 million capital campaign project, “Imagine! Building The Future," will address infrastructure and accessibility improvements, and upgrade the technical capacity of the 700-seat venue.

To share in the diversity of Chumash tribes, the ongoing traditions of the indigenous peoples of this region, and the cultural preservation ef…

Thanks to a skilled final shot by Chumash Charity Golf Classic participant Maxine Littlejohn, she and three team members each became a proud owner of a new Chevy vehicle.

Daniel Salgado, tribal chairman for the Cahuilla Band of Indians, inspects his tribe's new Type 3 fire engine, which is designed to fight brush fires and was donated by the Santa Ynez Band of Chumash Indians.