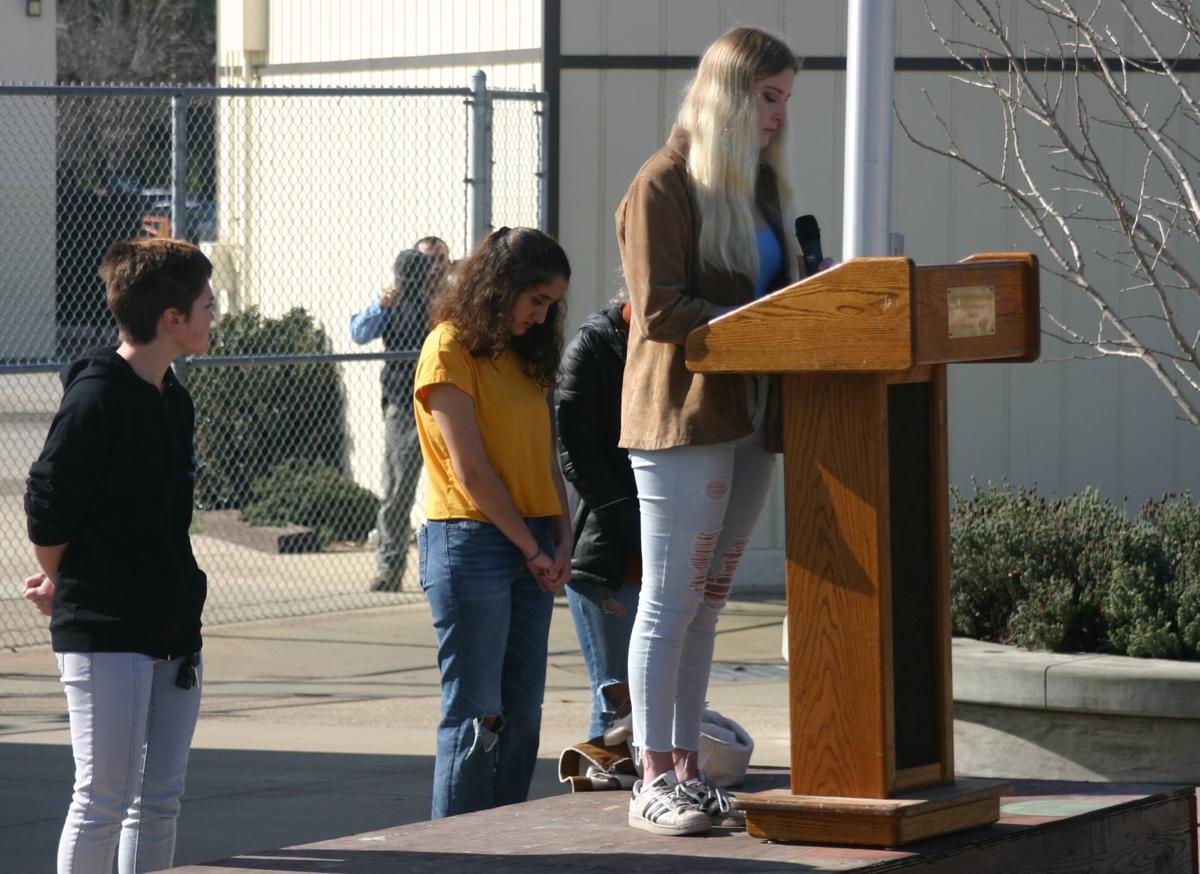 At an anti-violence rally Wednesday morning, Santa Ynez Valley Union High School student Bella Manfreda offers a tribute to some of the 17 victims of the Feb. 14 mass shooting at Marjory Stoneman Douglas High School in Parkland, Florida. Behind her are fellow rally organizers Sofia Caciola and Kiara Castarelli. 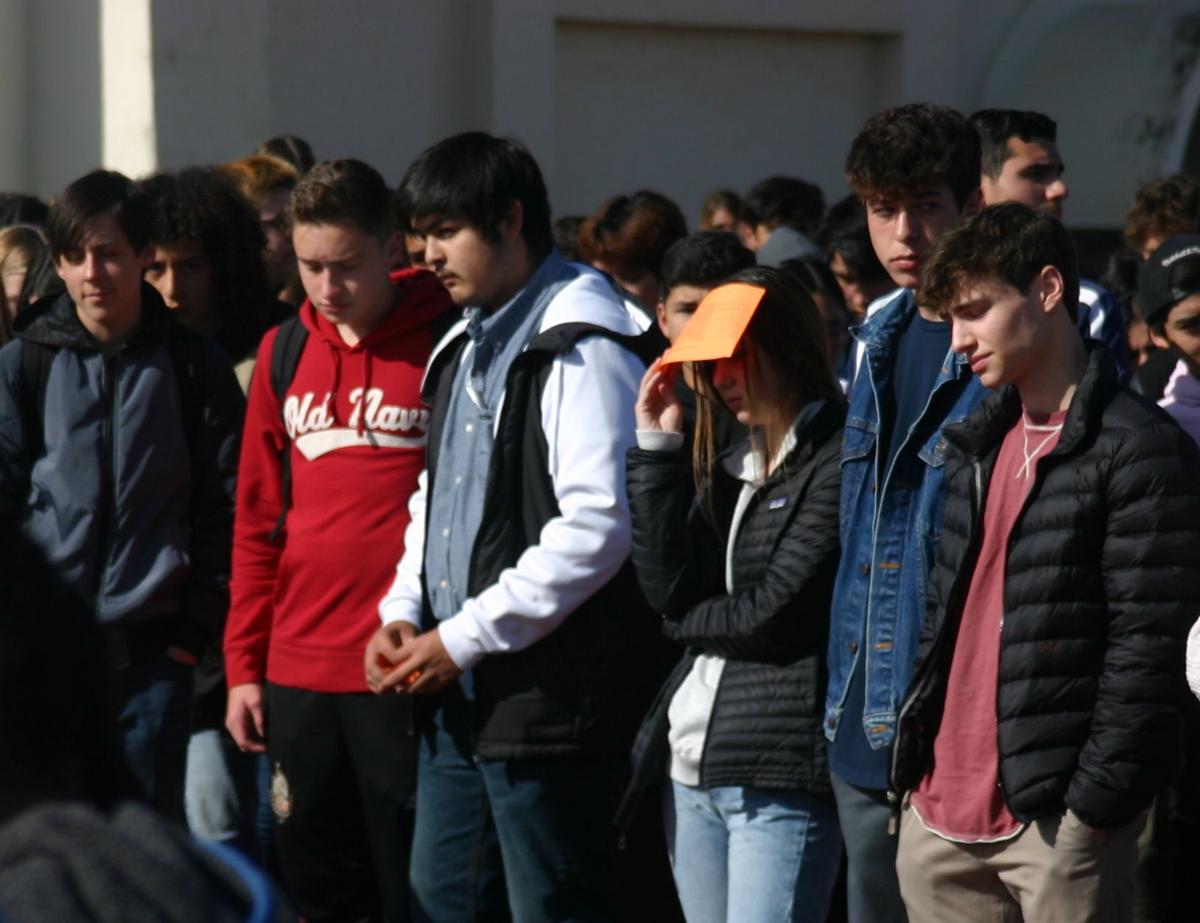 Several hundred students gathered Wednesday morning on the Santa Ynez Valley Union High School field in a quiet rally to call for an end to violence on school campuses nationwide timed to coincide with the #ENOUGH National School Walkout.

The mood was subdued as students streamed from their classrooms at 10 a.m., joining a growing river of their classmates flowing through the gates in the low chain-link fence surrounding the field, where fellow students handed out orange fliers with steps students can take and contact information for elected officials.

Students pooled at the southeast corner of the track and stood quietly to hear rally organizers issue a call to action.

“I’m not here to be on one side or the other, but to advocate for students to be safe,” Sofia Caciola stold the crowd of students, adding that they might think they were powerless but they’re not. “It’s our turn, so be ready to pounce.”

Caciola said it’s time for all sides to stop arguing and come together in a dialogue to find solutions to violence that have left students and teachers dead and wounded at campuses nationwide in recent years.

“Arguing is sending us into infinite cycles,” she said. “Break that cycle. … No matter what our beliefs, we can all agree things need to change to make students safe. … It’ time to say enough — enough senseless violence.”

Bella Manfreda, another of the five student organizers, took the podium to give a short but moving tribute to several of the 17 victims of the Feb. 14 mass shooting at Marjory Stoneman Douglas High School in Parkland, Florida.

Horvath gave a short background on each one and told how they had died — holding a door open so others could escape or shielding classmates from the gunman.

Afterward, students bowed their heads as she called for a moment of silence to remember all the victims of the shooting.

As students returned to their third-period classes following the rally, organizers talked about why they were motivated to organize the event.

“I just felt really helpless,” said Kiara Costarelli of her reaction following the Florida shooting. “I just felt like I needed to do something.”

Horvath said she saw it as a way to bring the student body together.

Others on the organizing committee were Olivia Horvath and Jordan Whitney.

Although Santa Barbara County sheriff’s deputies stood by to provide security, and the gates to the main parking lot were closed and monitored, the rally came off peacefully. Very few outsiders were visible on campus.

“It was very nicely planned,” said Vice Principal Peter Haws. “With the strength of the national movement, we chose to cooperate (with the students) and create an appropriate rally for students to be able to feel they have a voice on something we can all agree on … so they’ll feel authority figures are listening.”

Haws said the students wrote their speeches in advance and submitted them to the school administration for vetting to be sure they did not contain any political messages or any mention of guns.

Some parents and community members have expressed the opinion that students should have held the rally on their own time, rather than on school instructional time.

But Haws agreed with others that the rally was educational in the areas of American government, political science, social science and history, and he noted students were offered the option of remaining in class with their teachers or attending an alternative activity in the gymnasium.

“It was certainly an educational experience for students to work cooperatively with another group … to give students an opportunity to express their feelings and be respectful,” he said.

The Simmons sisters were featured during Thursday’s broadcast of ABC’s Good Morning America in a segment that they thought was to spotlight a song they wrote as part of the Hamilton Education Program, a school-based initiative led by the producers of the hit Broadway musical “Hamilton.” What they didn’t know was that the segment would conclude with them interacting directly with Lin-Manuel Miranda, the writer-producer who created and starred in “Hamilton.”

After a 94-day battle with COVID-19 in which survival was uncertain, Santa Maria resident Efrain Rangel was discharged Wednesday from Marian Regional Medical Center and finally able to rejoin his wife and three children.

Traffic control on Highway 154 between Painted Cave Road and San Antonio Creek Road is scheduled for Wednesday, July 1, between the hours of 8 a.m. and 1 p.m.

At an anti-violence rally Wednesday morning, Santa Ynez Valley Union High School student Bella Manfreda offers a tribute to some of the 17 victims of the Feb. 14 mass shooting at Marjory Stoneman Douglas High School in Parkland, Florida. Behind her are fellow rally organizers Sofia Caciola and Kiara Castarelli.