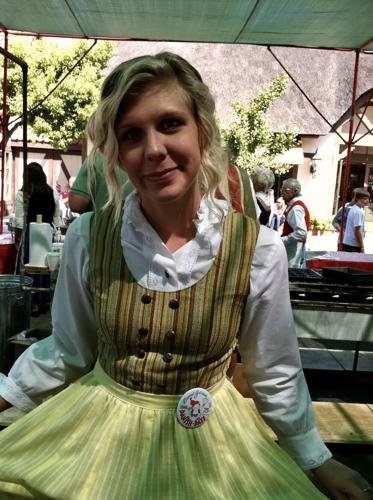 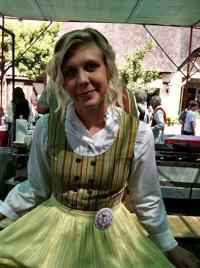 2021 Solvang Danish Days Maid Kayla Bandel wears her traditional Danish Days garb during an æbleskiver breakfast at a past Danish Days event. Bandel will preside alongside two other maids at the 2022 event. 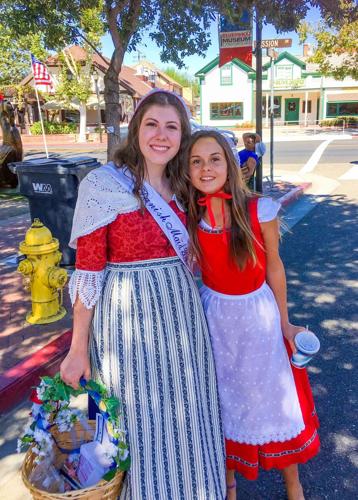 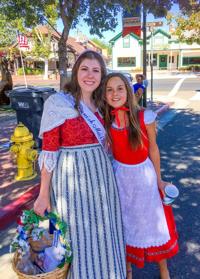 For the first time in the 85-year history of the Danish Days festival, three Danish maids will preside over the event that runs from Sept. 16 to 18 in downtown Solvang.

The maids include 2020 Danish Maid Isabella Lopez, 2021 Danish Maid Kayla Bandel and a third still to be selected.

“In an unprecedented move, due mainly to the festival’s two-year pandemic-induced hiatus, the Solvang Danish Days Foundation decided that it was only fair to give the first two, very deserving young ladies their chance at Danish maid, even though the festival could not take place in 2020 and 2021,” said Brenda Anderson, Danish Days Foundation board member and 2022 festival co-chair.

Applications for the 2022 representative still are being accepted until May 18. To submit an application, email Brenda Anderson at brendaA@rplmanagement.com.

In addition to sharing the royal title with two others, Bandel is making Danish Days history as the oldest Danish maid to hold the title at 32 years old, a foundation spokeswoman said. The title is more traditionally bestowed upon a high school senior.

Bandel's connection to Solvang goes back generations. She is the oldest daughter of Pete and Debbie Bandel and is the granddaughter of Howard Petersen, a Solvang Danish Days Foundation co-founder who was born and raised in Solvang. She also is the niece of Anderson, Danish Days co-chair who also served as a former Danish maid.

According to the foundation, despite Bandel not living in Solvang, the decision to name her 2021 Danish Maid was based on her years of service to the event and multigenerational Danish roots in Solvang.

“Although I do not live in Solvang, Danish Days was always my favorite holiday and celebration, from the time that I was a little girl,” Bandel said.

She recalled when the third weekend in September rolled around each year, she would head to Solvang to fulfill her Danish duties. Those duties began as a child when she would help blow up balloons for the children’s parade and pass out jam and juice at the æbleskiver breakfasts.

Bandel noted that every year during high school, she had æbleskiver with her family, assisted with parade traffic, delivered Sunday’s breakfast to the Atterdag Village retirement community and contributed to the event’s cleanup and breakdown.

“Never because I was told to do so,” she said, “but because I want to ensure that this celebration continues … forever."

"After the past two years that we’ve all experienced, being named Danish Maid 2021 means the world to me,” Bandel added.

She can think back to age 11 when she began helping at her family’s Solvang store Iron Art during the annual festival. She remembers starting as a people greeter and graduating to a sales clerk running the cash register and restocking the store throughout the year as a part-time job.

Above all, Lopez said working during the Danish Days festivities was her favorite experience.

“During Danish Days, the whole town transformed from an already lovely and awe-inspiring village to a whole new world filled with people and pieces of Danish history,” she said. “It felt like stepping into a bit of the past. Seeing the joy which the festival brought to the many tourists was always exciting as it reminded me of just how important Solvang is to the rest of the world.”

Generations before her, Lopez was born the great-granddaughter of Danish immigrants Arne and Gerda Larsen, who immigrated to Canada from Denmark in the 1950s and settled in Solvang approximately a decade later.

Since its modest beginnings in 1936, when a one-day celebration commemorating the 25th anniversary of Solvang’s 1911 founding was conceived, Danish Days has evolved into a weekendlong festival showcasing the village’s heritage.

The two married and raised two daughters and a son — Jette, Birgitte (“Gitte”) and Uffe (“Jack”) — in the Santa Ynez Valley. Each of their children remained in the area and started families of their own.

Lopez’s paternal grandmother, Jette, whom she called “Mormor,” married and had four sons who all stayed near their hometown. Jette then took over her mother's yardage shop and combined it with her mother-in-law’s business Iron Art.

“From family traditions like our Christmas Eve celebrations, recurring every year at Morfar and Mormor Larsen’s house, to learning to cook and bake Danish meals and treats with Mormor or Farmor Jette, whom we called Famy, I have loved and grown from every encounter with the Danish spirit and that of Solvang and its inhabitants,” Lopez said.

“I want to do my part to keep this unique experience alive,” she added. “In becoming a Danish Days maid, it helps me to carry on the traditions of the past generations.”

Leading up to the weekend, the Danish maids will sell “Win a Trip to Denmark” raffle tickets at the weekly Solvang Farmers Market and will make appearances at the Danish Brotherhood, the Danish Sisterhood, the Vikings of Solvang and at Valley Rotary Club meetings to discuss the upcoming events and represent their Danish lineage.

The Danish maids will also be available for media appearances. To further inquire, contact Brenda Anderson at brendaA@rplmanagement.com.