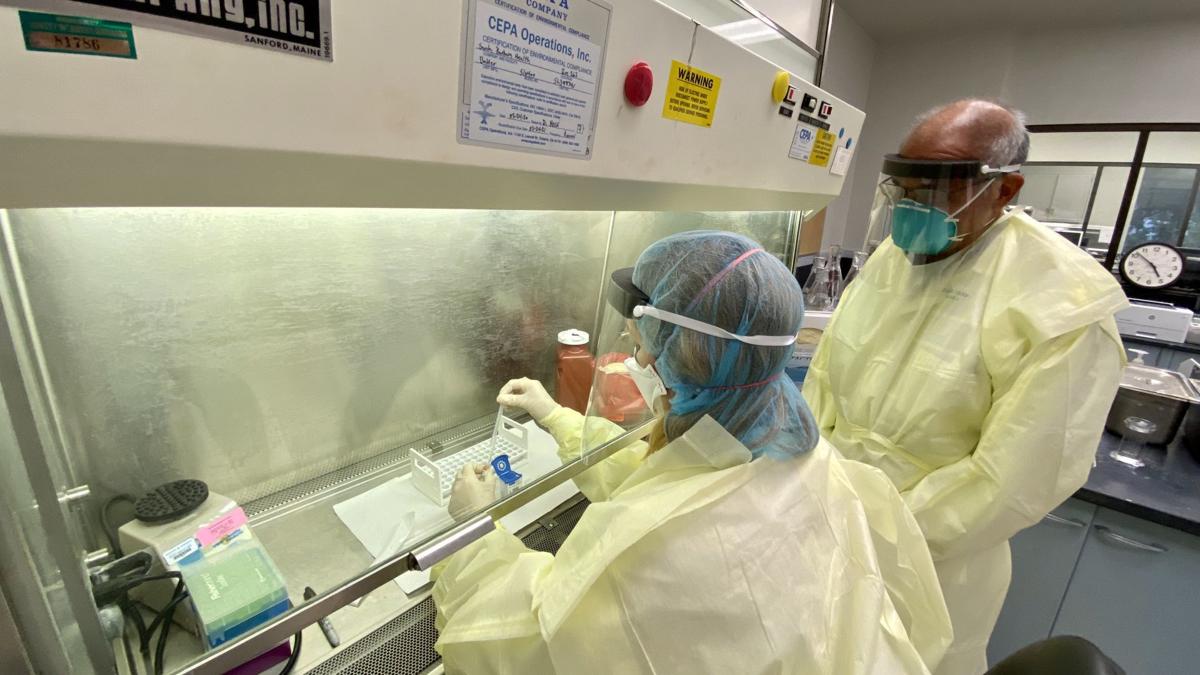 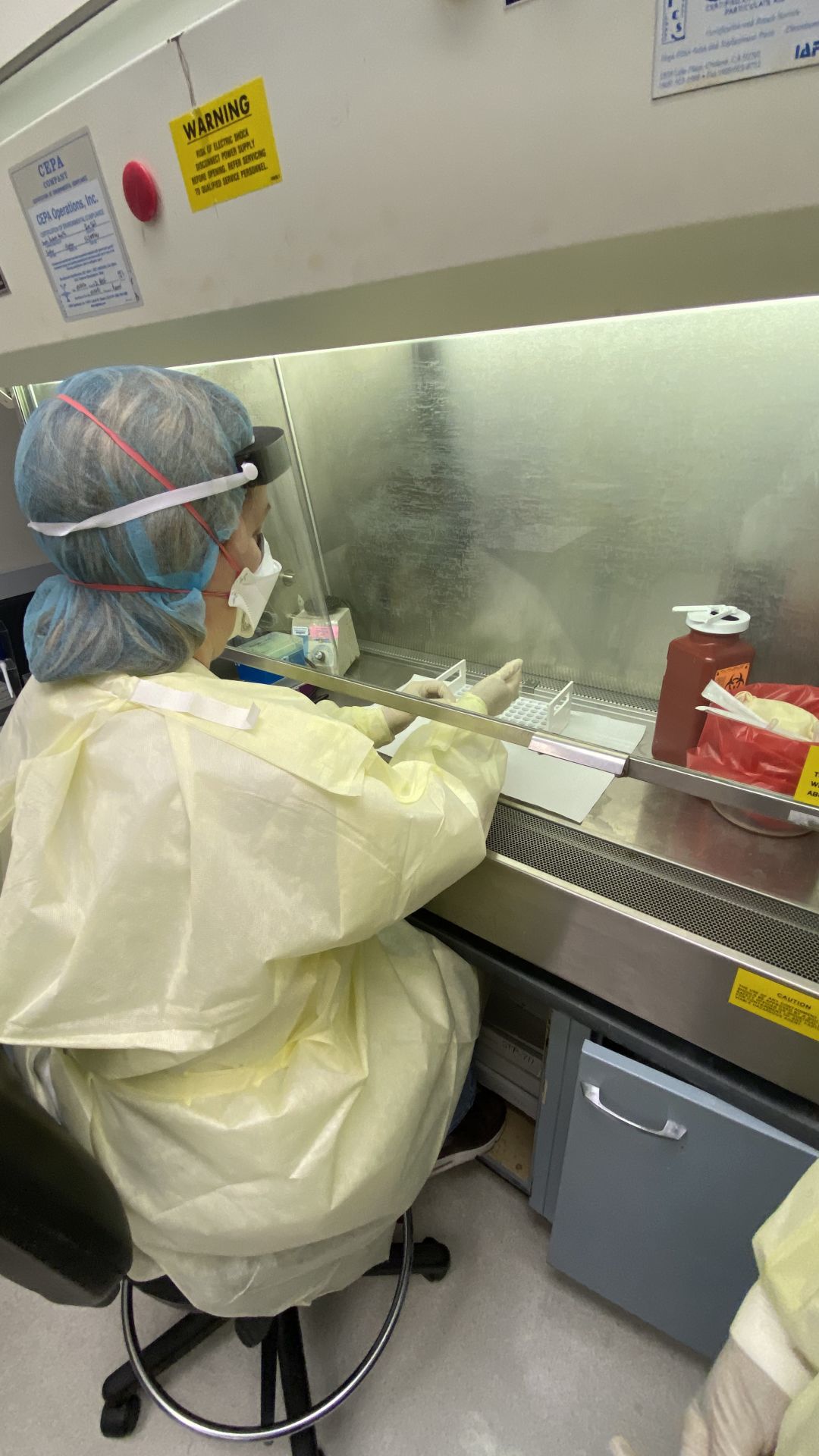 A technician at the Santa Barbara County Public Health Department laboratory prepares to use GeneXpert, a COVID-19 test from molecular diagnostics company Cepheid, on Tuesday.

While COVID-19 testing has increased in Santa Barbara County with a faster turnaround on results, Public Health Department officials still say current case counts are unlikely to represent the full range of spread in the county until more tests are obtained.

Tests are still being mostly reserved for high-priority individuals, including those with underlying health conditions, the elderly, first responders and health-care workers.

However, increased testing capacity over the past two weeks at labs has contributed to slightly more accurate testing numbers.

The county has also begun receiving same-day test results for high-priority patients, including health-care workers and the elderly, at Pacific Diagnostics Labs in Santa Barbara, permitting up to 10 tests per day, public health officials said.

There are also plans for further in-county testing at the County Public Health lab, which was previously unable to accommodate testing due to a lack of sufficient equipment.

Dr. Stewart Comer said the county hopes for quick delivery of tests from molecular diagnostics company Cepheid, which would allow for same-day turnaround on results at the county's lab.

However, due to the difficulty of obtaining such tests, Comer said the county cannot promise when they will arrive.

Even with these added facilities, officials said they will still rely on outside labs for testing, including public health labs in Ventura and San Luis Obispo counties.

'Devastated': High school seniors grapple with reality of not returning to school

“While we will have the capacity to produce rapid tests, we will continue to rely on our partners and the state,” Public Health Department Director Van Do-Reynoso said.

Despite the current and expected testing increases, officials still have not been able to give an estimate of the county’s daily testing capacity or the total number of tests conducted thus far, citing a lack of sufficient information and delays in test results from commercial labs.

Comer said all labs conducting tests for the county are reporting results through a portal called CalREDIE, including such commercial labs as Quest, Sonic, LabCorp and WestPac, as well as Cottage Health laboratories.

“We know all positive and negative results from those sites are being reported through CalREDIE,” Comer said Monday.

While some clinics said they have full confidence that labs are reporting results to the county, other health facilities like Marian Regional Medical Center have reported that does not always occur.

Although faster turnaround from Quest laboratory in West Hills has helped the hospital focus on patients confirmed for the virus, the hospital has still experienced insufficient levels of reporting by the lab, said Dr. Kevin Ferguson, clinical laboratory and pathology medical director at Marian.

“For this reason, the Dignity Health Central Coast Service Area hospitals are internally tracking all inpatient and outpatient results and working closely with the county health departments to assure that the most accurate and up-to-date information is available for our health-care providers at all times,” Ferguson said.

Along with Quest, the hospital also sends samples to Dignity Health Clinical Laboratories in Stockton, Ferguson said. Turnaround for test results has taken around 48 hours, he added.

Marian will also begin conducting tests at its own clinical lab in the near future, since being granted an emergency use authorization by the Food and Drug Administration for three molecular platforms at their lab, Ferguson said.

In total, Marian has requested approximately 800 coronavirus tests from labs.

Despite some continued delays in results, quicker turnaround at labs has greatly assisted local clinics, who are able to report results sooner to both patients and the Public Health Department.

“Our turnaround time with commercial labs has been around 24 to 48 hours,” Jauregui-Garcia said last week. "It started improving about a week and a half, two weeks ago.

"At San Luis Obispo public health labs, the turnaround is a little slower. It depends on the amount of work that they have."

Similarly to Marian, staff at Community Health Center clinics are maintaining their own statistics for their testing, reporting suspected cases to the Public Health Department prior to receiving results.

At Okerblom, Voegele and Hole, a family clinic in Santa Maria, Dr. Robert Okerblom said testing turnaround now takes two to five days, and that although there was some miscommunication with labs initially, communication about results is more reliable now.

“We’re getting reasonable turnaround time,” he said. 'If there’s been some lab error or collection error, that takes longer to report."

Overall, until further testing capability is obtained, lower-priority individuals with minor symptoms will not be tested, blurring the picture of true spread in the county.

In neighboring San Luis Obispo County, however, Public Health Officer Penny Borenstein stated Monday that testing will be expanded to all individuals experiencing coronavirus symptoms, regardless of the severity, in order to give a more accurate picture of the level of spread.

"We can’t really know where we are in this epidemic until we have clear eyes on how many people in this county have this disease," Borenstein said.

Santa Barbara County has confirmed 15 new COVID-19 cases as of Thursday, 10 of which are among inmates in the federal penitentiary in Lompoc, bringing the total to 243 cases.

'I pray all day long': Louis Meza hoping for recovery of wife, fighting COVID-19 in the ICU

Nearly a month after noticing COVID-19 symptoms and two weeks after leaving the hospital himself, Louis Meza is still locked in a battle with the virus, but this time it's his wife he's supporting as she fights for her life.

Officials at the Good Samaritan Shelter are worried about sustaining service to the county's homeless population after racking up a $60,000 bill from expanding shelter services and taking over operation of the Santa Maria High School emergency shelter, all while quickly running through supplies of personal protective equipment.

A technician at the Santa Barbara County Public Health Department laboratory prepares to use GeneXpert, a COVID-19 test from molecular diagnostics company Cepheid, on Tuesday.