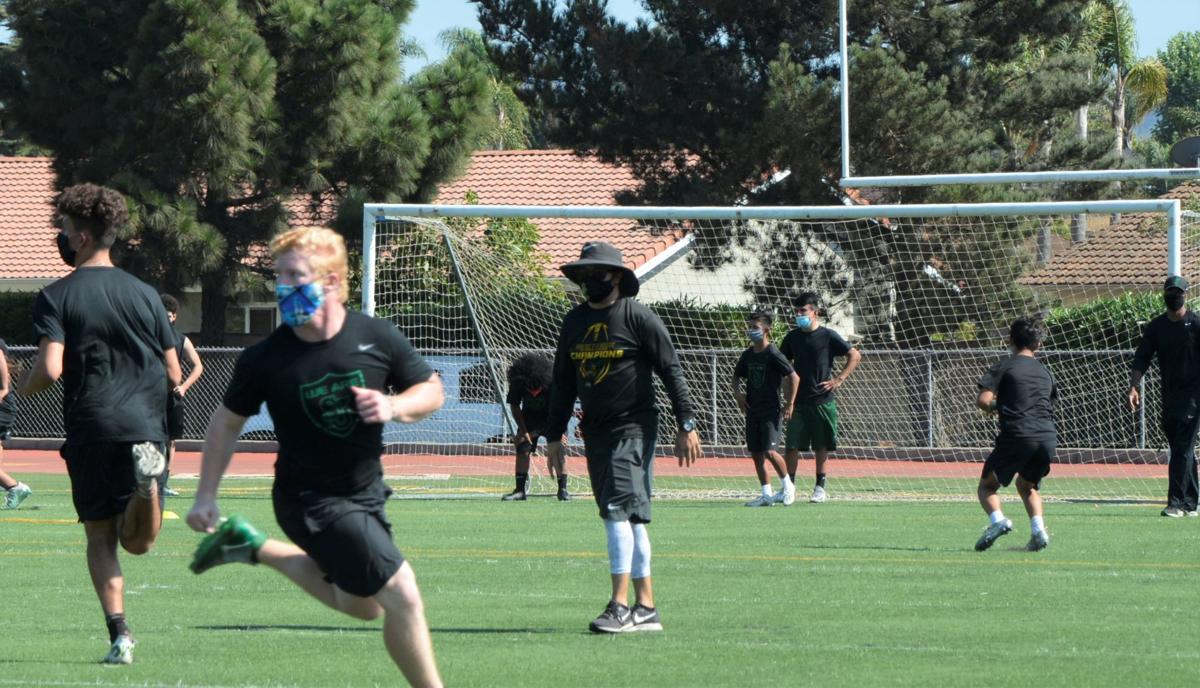 Head coach Pepe Villasenor leads his team in drills on Aug. 24. Players from several St. Joseph sports teams make their way to the large play fields behind campus to start training for the upcoming sports season. 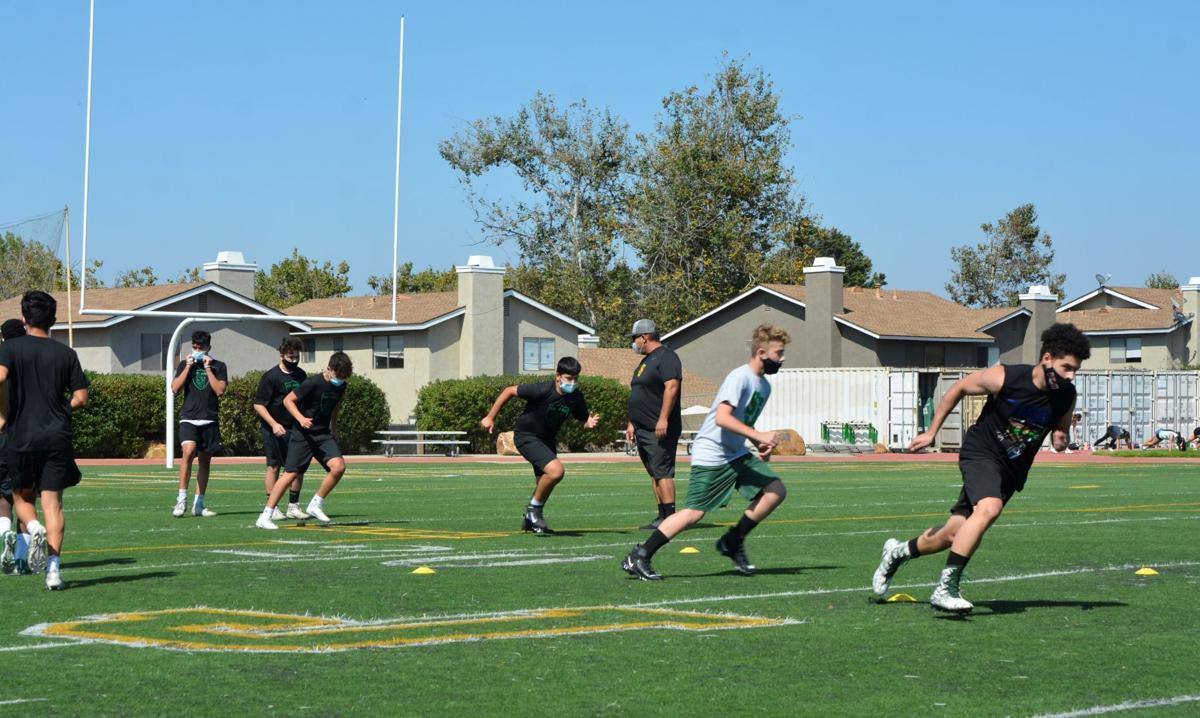 Players from several St. Joseph sports teams make their way to the large play fields behind campus to start training for the upcoming sports season on Aug. 24. 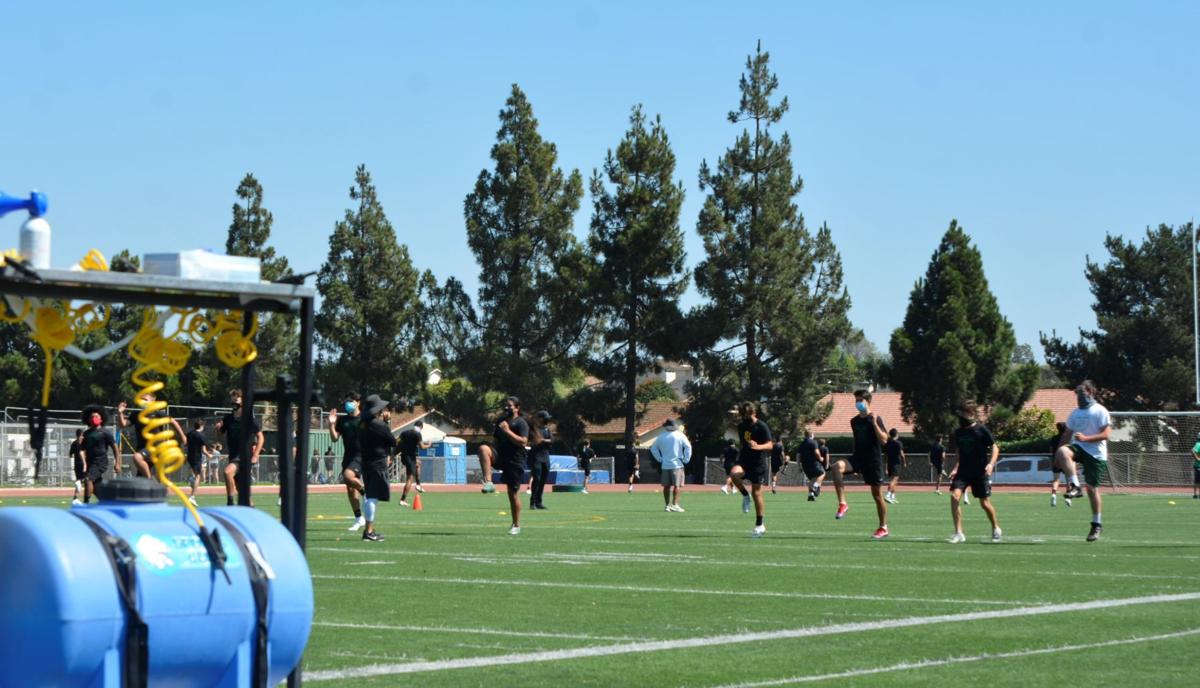 Most of the schools in the area have set the dates for their athletic programs to resume on-campus activities.

Mission Prep was slated to restart this week.

Meanwhile, Lucia Mar Unified, which includes Nipomo and Arroyo Grande high schools, is hoping to start next month, on Oct. 5.

So many different dates for all the different schools. What gives? Well, the various schools have varying goals, intentions and resources.

Nipomo and Arroyo Grande, hoping to start in October, feel it creates the perfect window, giving their student-athletes about three months to prepare for a season that should start in late December or early January. That's the standard amount of time to prepare for a normal fall season.

But is that October date too late? No. I think it's just fine. Did St. Joseph start too early? Nope. That's OK, too.

I know some parents and athletes are raring to get back into the game, but why rush? We know when the various seasons are scheduled to start. (The football season kicks off Jan. 7-8).

If I'm a Lucia Mar parent or athlete, I'm happy with an Oct. 5 date. You wouldn't want to start too early and then have to shut it down and hope you're able restart again. There's nothing wrong with playing it safe, especially in the era of COVID.

I wouldn't be surprised if there's more pressure on LMUSD to start a bit earlier, but I would stick with October.

But what about St. Joseph? Didn't the Knights start too soon then? Not necessarily. Again, St. Joseph is a private school with different needs and resources than large public schools. Seventy-five percent of SJHS students play at least one sport. Sports are vital to that school.

After waiting all of 2020 to get back in the ring for an actual professional bout Dato, cruised to victory in a lightweight match held in Rosarito, Mexico.

Also, being smaller, they can adapt more quickly, stop and start more efficiently. It shouldn't surprise anyone that St. Joe's is being more aggressive than other schools in resuming athletics.

I also like how the different schools have staggered their dates. Instead of everyone starting at once, it's more of a slow wave, with Lompoc and Cabrillo starting next week, Santa Ynez the week after that and Santa Maria schools the following week.

Will there be enough referees when area sports resume? Local officials aren't quite sure.

These ADs and coaches all talk to each other and are working together. Lompoc and Cabrillo will learn something and pass that along to Santa Ynez who can then pass something it learned to Santa Maria schools.

I'm just happy we have some concrete dates on the board and should have more student-athletes on the field. The area districts and their administrators have put together sound plans to resume athletics and bring back some normalcy.

Claire Tuggle, one of the top young swimmers in the nation, joins Central Coast swim scene

Tuggle, who committed to swim for the University of Virginia last month, won the girls 500 freestyle and finished second in the 200 free at the 2019 CIF State Meet when she was a freshman at Clovis North High School.

SMJUHSD joins most area high schools who already have return-to-play dates in place. St. Joseph High School resumed athletic activities on Aug. 24. Lompoc Unified, with Cabrillo and Lompoc, is planning to return on Tuesday, Sept. 8. Santa Ynez Valley Union High is scheduled to return on Monday, Sept. 14. The Warriors, Saints and Panthers will follow on Sept. 21.

Alan and Blaine Johnson's stories began on a farm in Sisquoc. But their passion for drag racing took them all the way to the top of the sport.

Lompoc High's next big-time running back has arrived

Napoleon Kaufman, Sheldon Canley, Lavon Coleman, Toa Taua are all Lompoc High running backs to play major college football, with Kaufman and Canley both being selected in the NFL Draft.

The next great Lompoc back has already arrived and he has a familiar name: Sheldon Canley Jr.

Head coach Pepe Villasenor leads his team in drills on Aug. 24. Players from several St. Joseph sports teams make their way to the large play fields behind campus to start training for the upcoming sports season.

Players from several St. Joseph sports teams make their way to the large play fields behind campus to start training for the upcoming sports season on Aug. 24.