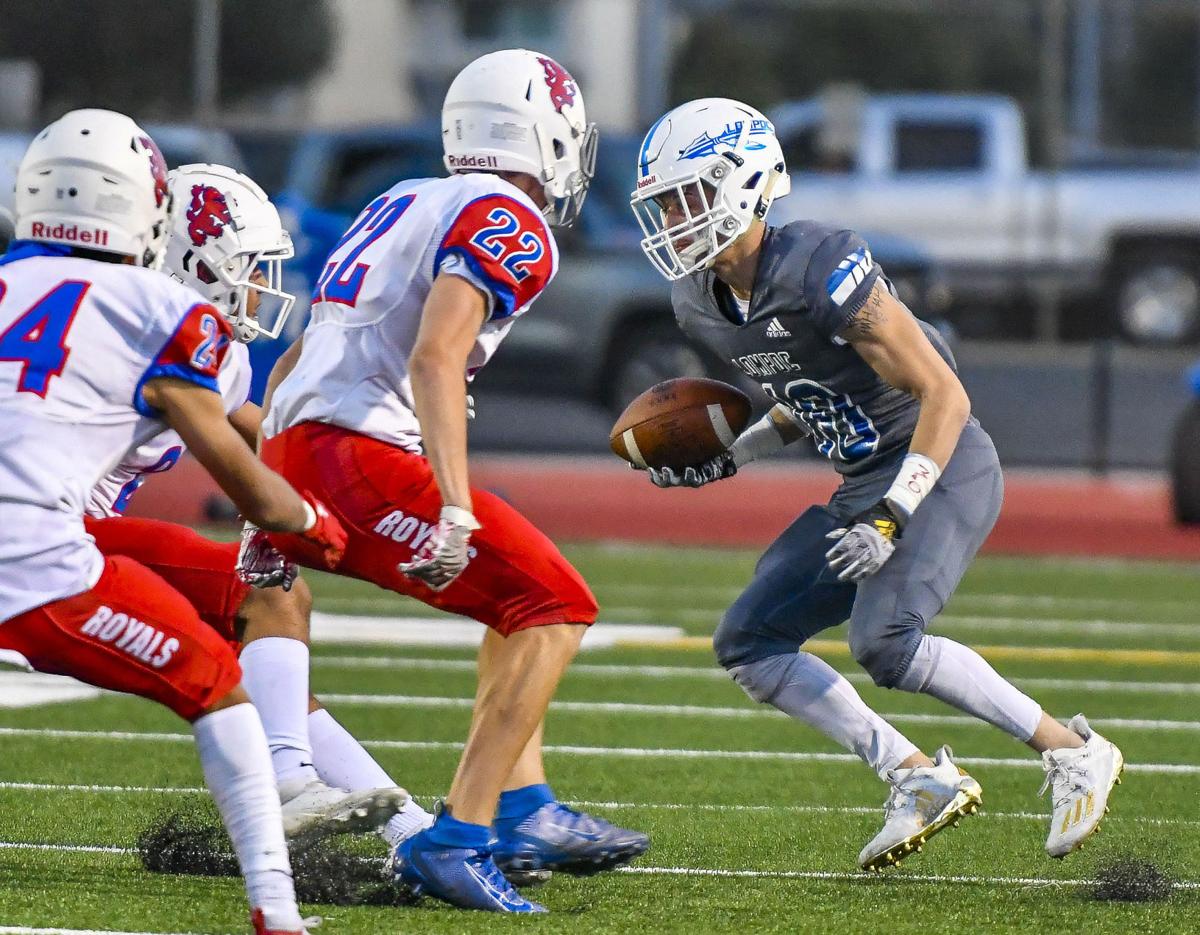 Lompoc’s Deville "Joker" Dickerson reverses his field against San Marcos on his way to his second kickoff return for a touchdown at Huyck Stadium on Friday night. 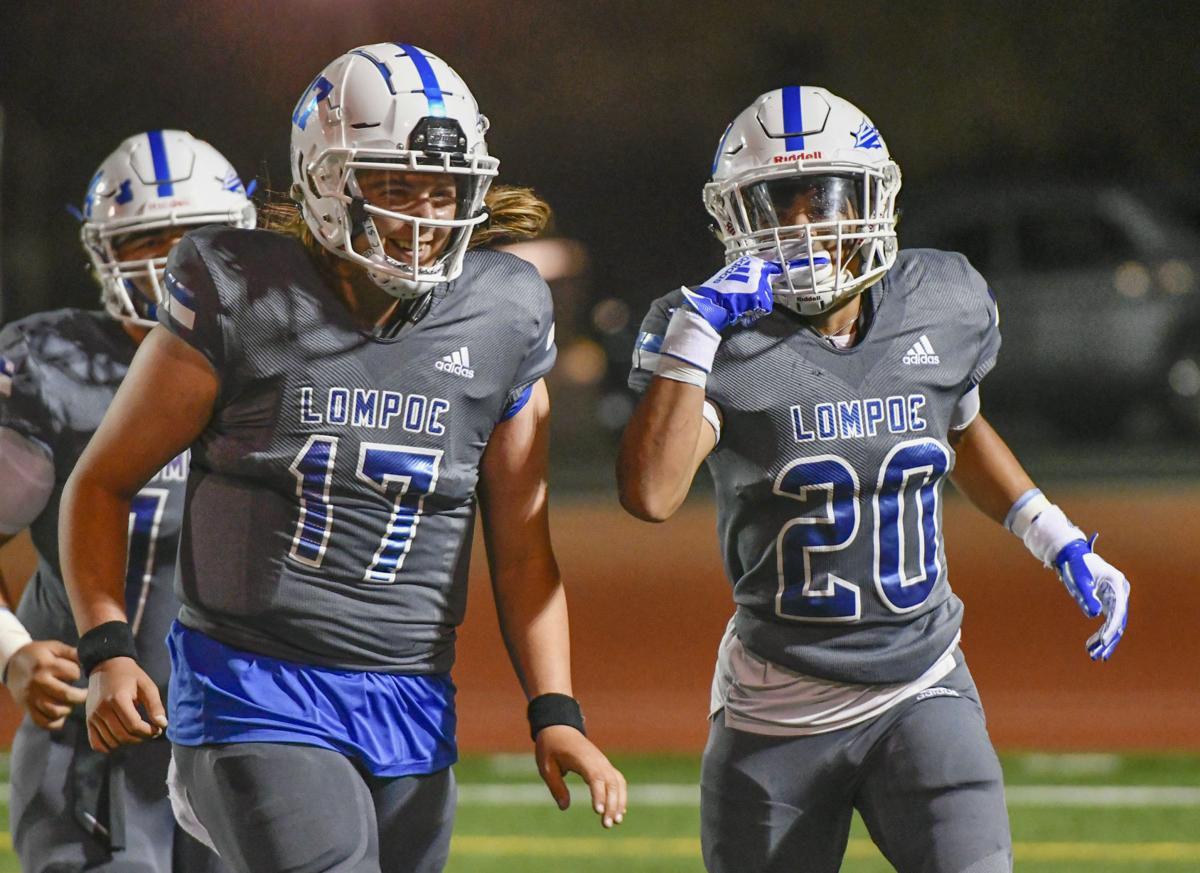 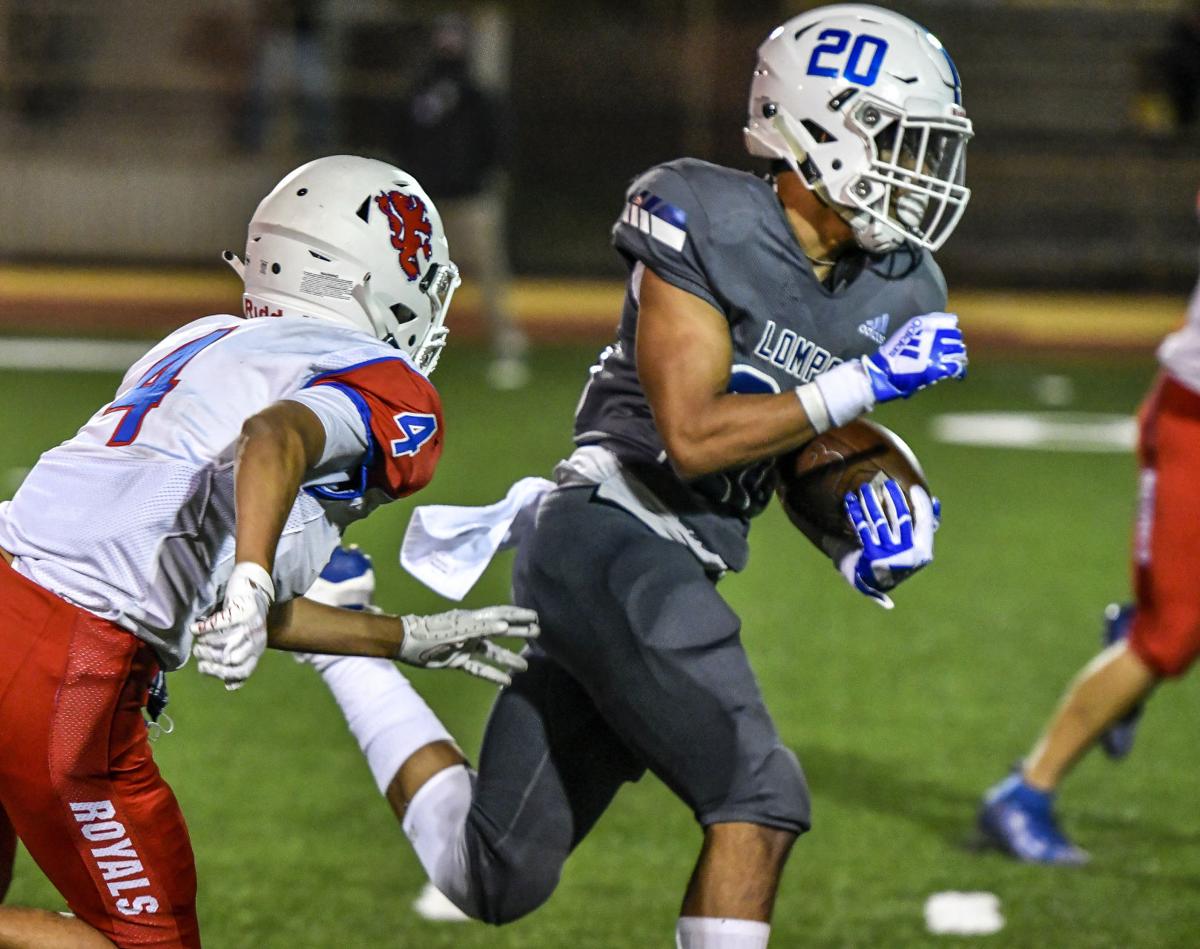 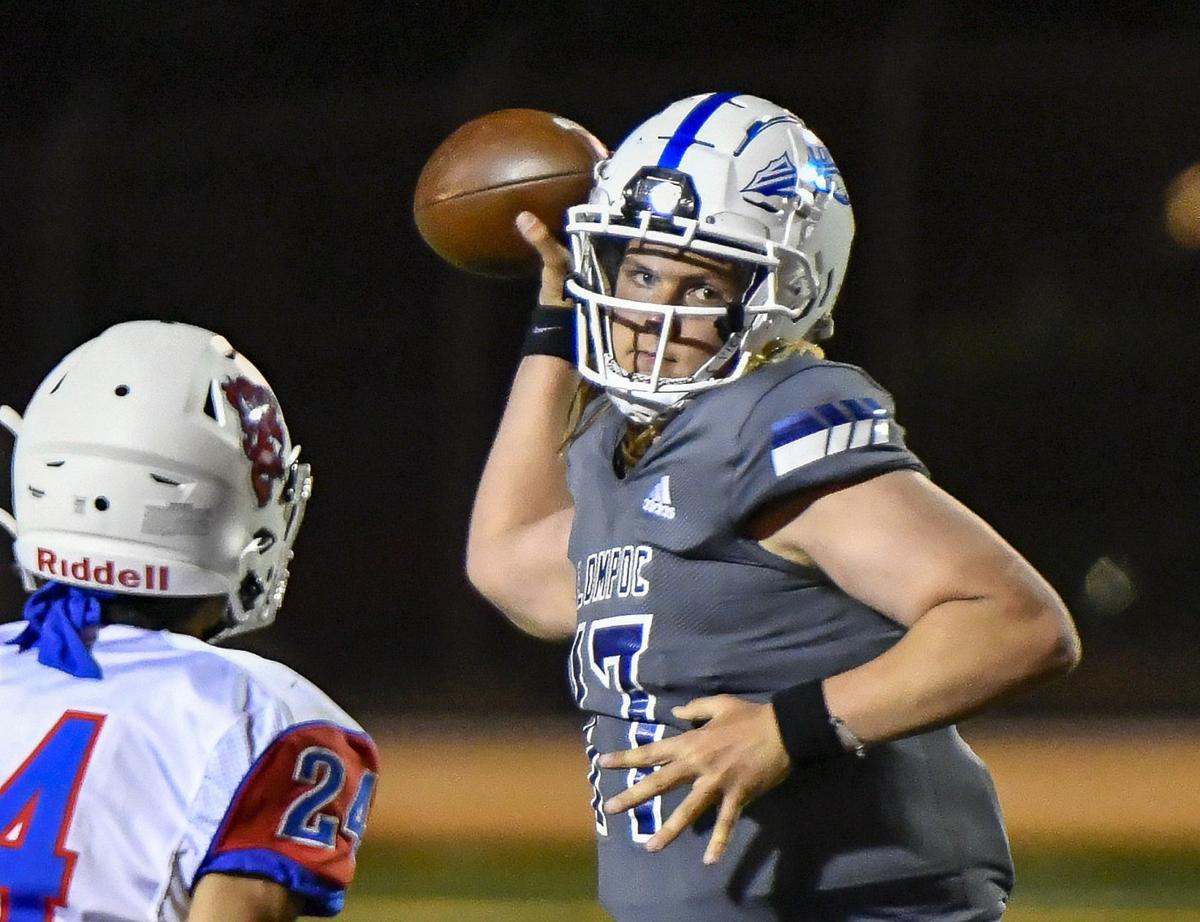 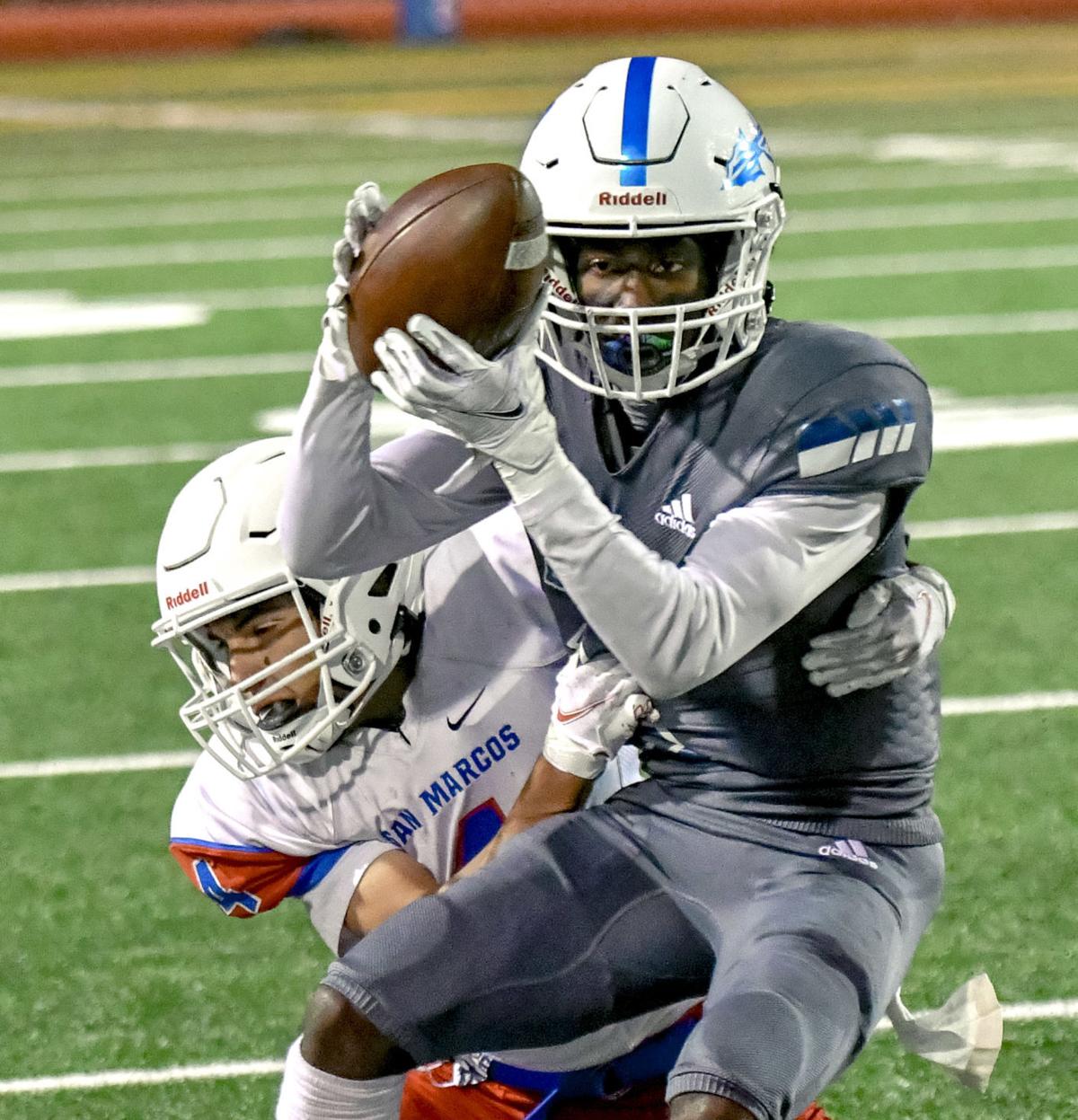 Lompoc might need more of a challenge this spring.

Lompoc could've ran up the score after building up a 47-7 lead at the break, but scored just once in the second half.

Junior defensive back/receiver Deville Dickerson continued his stellar all-around season. The best special teams performer the area has seen in awhile returned a kick for a touchdown. He also returned a punt for a touchdown for the second week in a row. (He also blocked a PAT last week).

Sophomore quarterback Cavin Ross completed 10-of-16 passes for 190 yards and three touchdowns. In three games this spring, Ross has completed 67% of his passes (50-for-75) for 785 yards, nine touchdowns and two interceptions.

Sheldon Canley Jr. rushed for 178 yards on only nine carries Friday against the Royals, scoring three touchdowns. The junior has 378 rushing yards and is averaging 11 yards per carry with seven rushing touchdowns.

Cailin Daniels caught six balls for 138 yards in the win. Daniels, a senior looking to play at the next level, has 16 catches for 332 yards and three receiving touchdowns in three games this spring.

San Marcos actually struck first, scoring on a 90-yard touchdown pass in the opening seconds. But Dickerson responded with a 75-yard kick return touchdown to tie the game immediately after the Royals scored. The Braves wound up scoring 54 straight points.

Elijah Bobo and Melanie Nunez were named the Lompoc Homecoming King and Queen during halftime of the game at Huyck Stadium.

Cavin Ross threw his first of two touchdown passes to Cailin Daniels for a 14-7 Lompoc lead, Sheldon Canley scored on a 50-plus yard touchdown run and Dickerson then added a 60-yard put return touchdown for a 28-7 lead.

Ross threw a touchdown to Gavin Townes to put the Braves up 34-7 and Canley scored again for a 41-7 lead.

Ross then threw a 55-yard touchdown pass to Daniels and Canley scored from 40 yards out for the game's last touchdown.

Dickerson also had an interception in the Lompoc win.

Their next game, though, is up in the air. The Braves were scheduled to play Cabrillo on April 9, but the Cabrillo program is in quarantine after a player tested positive for COVID-19.

Cabrillo started its quarantine on March 30. It would not end until April 9 and Cabrillo athletic director Gary West said the team can not play immediately after exiting a 10-day quarantine with no practice.

West said the Conqs are preparing for the April 16 game against Santa Ynez and that Lompoc Unified School District directed the football program go into quarantine after receiving guidance from the county health department, which West said requires a full-team quarantine if an infected player has had extended, close contact with other members of the team.

"We will not be out of quarantine until April 9," West said in a text message. "We can't play any team after no practice for two weeks. We will play on the 16th against Santa Ynez. No one wants to play Lompoc more than us...I have said since day one, if we only get one game in, I would hope we could get the Lompoc game in."

Cabrillo pulled out of its original season-opening game against Dos Pueblos, citing player safety. The Conqs then started their season March 26 with a 9-7 loss to San Marcos.

Correction: This story has been corrected to clarify Cabrillo's quarantine status, which the school says was mandated by LUSD and the county health department.

Over the last two weeks, the Santa Ynez senior running back, who also doubles as a wideout, has broken a school record while racking up nearly 700 yards of offense.

Lompoc’s Deville "Joker" Dickerson reverses his field against San Marcos on his way to his second kickoff return for a touchdown at Huyck Stadium on Friday night.