Santa Ynez quarterback Mike McCoy stiff arms Cabrillo's Sean Wood out of the way to score a touchdown during a Los Padres League football game at Huyck Stadium in 2016. 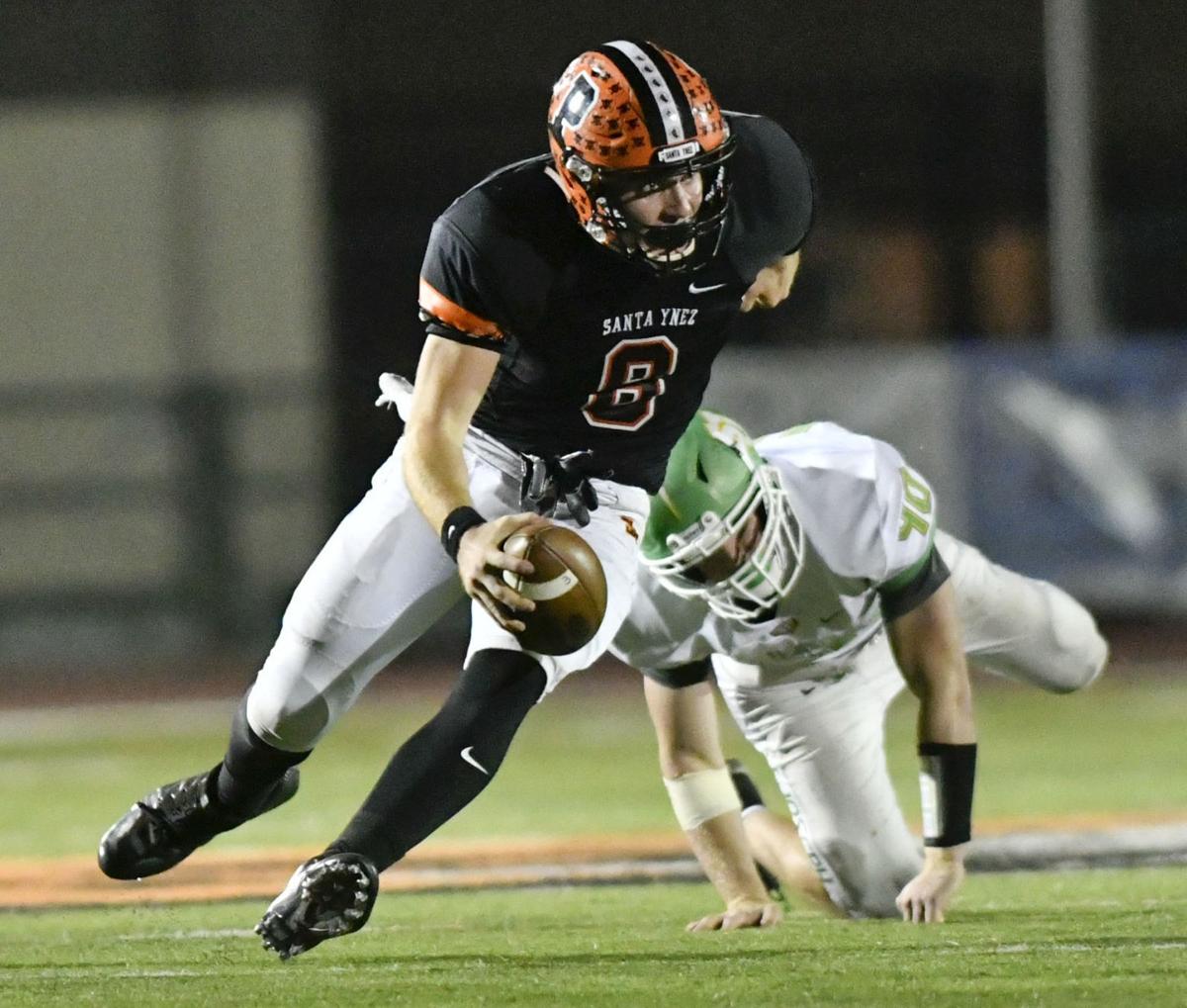 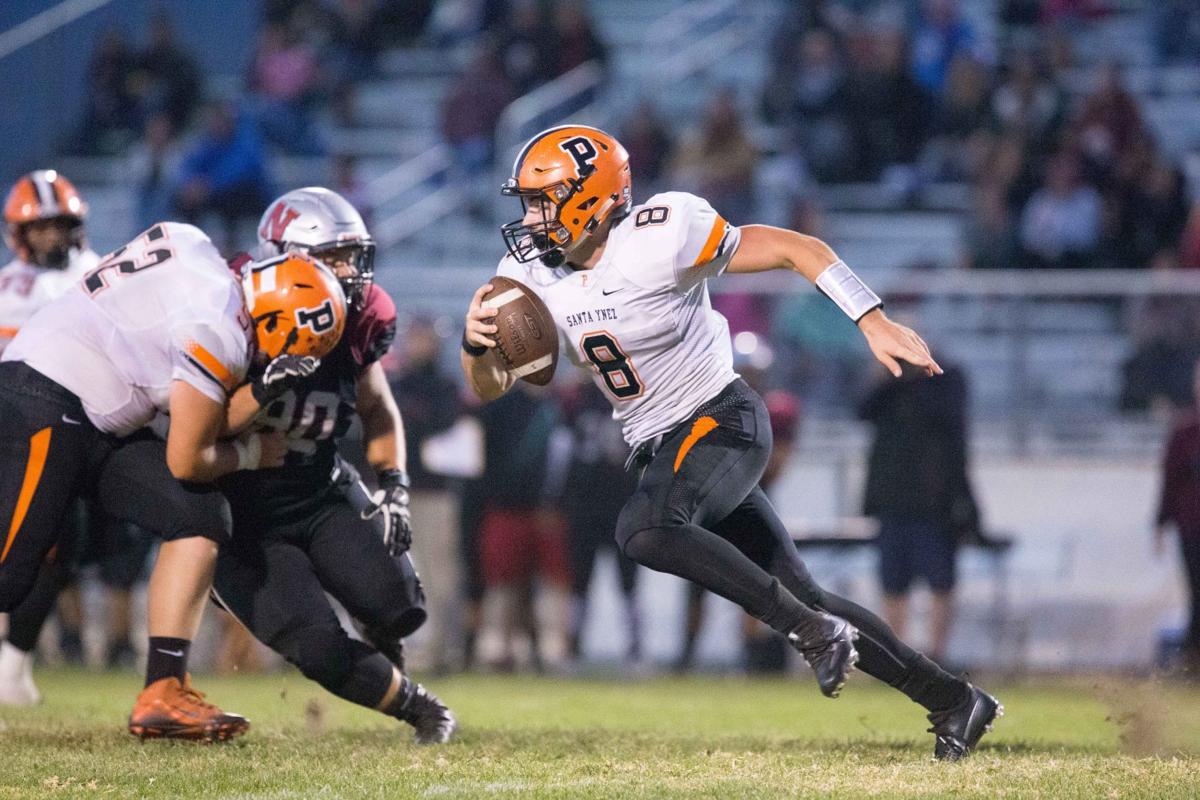 Santa Ynez quarterback Mike McCoy leaves the pocket on a bootleg in the first half of the Sept. 16, 2016 game at Nipomo. 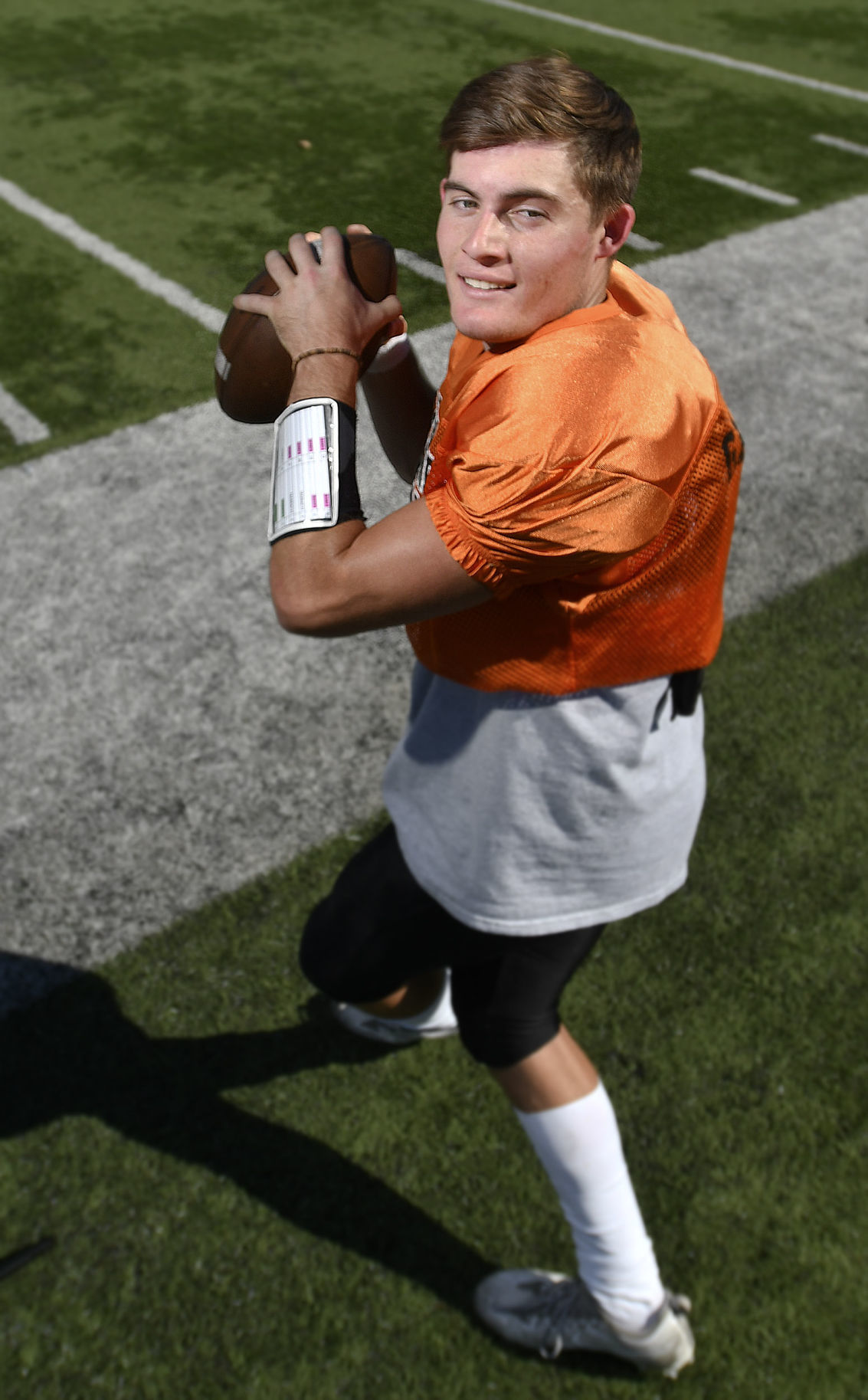 Santa Ynez quarterback Mike McCoy had a huge senior season. He threw 23 touchdowns and ran for 11 more in 2016.

Football players can put up some staggering statistics at the high school level.

Then there's Mike McCoy, whose versatility is truly unmatched.

Barnett coached tennis for 32 years, the last 23 of them at Santa Maria High School. She was inducted into the Northern Santa Barbara County Athletic Round Table (NSBCART) Hall of Fame in 2019. This year's Hall of Fame class and induction ceremony was canceled due the COVID-19 pandemic.

McCoy's career statistics at Santa Ynez are hard to fathom. He threw for over 2,500 yards and 23 touchdowns as a quarterback. He also accumulated over 1,000 career rushing yards with 13 career touchdowns. (He has three touchdown runs over 95 yards).

Righetti was 4-4 when the 2020 season suspended and eventually canceled. Would the Warriors be able to repeat as league champs? Could they play even deeper into the playoffs? Could this deep group of veteran players bring Righetti that elusive CIF title?

Not bad. McCoy, who graduated in 2017, wasn't just a two-way player, he was a quarterback who played both ways consistently and impacted the game on both sides of the ball.

But we're not done yet.

McCoy was his team's kicker as well, booting 103 kickoffs in two seasons with 23 touchbacks. He also punted 90 times for 3,000 yards, pinning 18 kicks inside the 20-yard line.

McCoy didn't just handle kickoffs, he was also a kick returner. He compiled 682 kick return yards with a kick return touchdown. He also returned a fumble for a touchdown and another touchdown on an interception return.

For his career, McCoy was good on 81 of 85 point-after tries and went 9 for 11 on field goals with a long of 48. He accumulated 108 total kick points in his career.

To recap, McCoy accounted for touchdowns in six different ways, throwing 23 touchdown passes, rushing for 13, receiving five, returning one for a touchdown on an interception and one more on a fumble and another on a kick return. He scored 21 touchdowns on his own and threw for 23 more while also intercepting 11 passes while kicking for 108 points.

"One of the most versatile players I think the Central Coast has ever seen," his former coach Josh McClurg said of McCoy. "Lock-down corner, dual-threat QB, kicker, punter, kick returner and was a great wide receiver."

“If there isn’t a spot on the team my freshman year I still plan on trying to make the team my sophomore year.“ DeBruno said. “Obviously, competing at the DI level is a goal for any high school athlete so if I could have that opportunity it would be a huge dream come true.”

McCoy is the 15th finalist for the Times' Player of the Decade. The list of finalists was compiled by the sports staff at the Santa Maria Times, Lompoc Record and Santa Ynez Valley News, which polled area coaches. McCoy led the Pirates to an 8-2 record as a senior, though they weren't selected for the CIF-SS playoffs.

McCoy's numbers are clearly different, but to see his impact you'd need to see his style of play. During his senior season in 2016, in which McCoy took over the quarterback position after contributing in his various other roles in his first two varsity seasons, he brought an electrifying ability to extend plays and make things happen out of nothing.

"Mike had tremendous work ethic and I think he made every opposing coach create a 'McCoy Drill' when they had to game plan against him due to his ability to scramble and improve broken plays," McClurg says. "He was really special when a pass play broke down because he could then use his running ability.

"Dude was special. When you had him and (receiver Gabe) Prendergast on the field together and it was 3rd and 31, we were still confident."

"My younger brother Jeff has the school record at 96 yards and Mike was always trying to beat it," McClurg recalls.

Though McCoy had never really mastered the QB position in his first two varsity seasons, McClurg had no doubt he'd find his place in that role as a senior. After all, "he won the NFL Punt, Pass and Kick competition in the fourth grade, for the entire nation," McClurg said.

Once all 16 finalists have been announced, readers will have the opportunity to vote for Central Coast Player of the Decade after winners are chosen from Santa Barbara County and San Luis Obispo County.

Cleared for takeoff: Cabrillo and Lompoc athletes set to return to campus July 6, with tight restrictions

The district athletic directors, Cabrillo's Gary West and Lompoc's Claudia Terrones, confirmed a plan has been approved by the district and county to have varsity athletes back on campus starting Monday.

Baseball's minor leagues canceled their seasons Tuesday because of the coronavirus pandemic, and the head of their governing body said more than half of the 160 teams were in danger of failing without government assistance or private equity injections.

SLO team went 2-18 in the two seasons before he took over the quarterback position in 2018. In two seasons at the helm of the Tiger offense, Corona guided San Luis Obispo to an 18-6 record.

Santa Ynez quarterback Mike McCoy stiff arms Cabrillo's Sean Wood out of the way to score a touchdown during a Los Padres League football game at Huyck Stadium in 2016.

Santa Ynez quarterback Mike McCoy leaves the pocket on a bootleg in the first half of the Sept. 16, 2016 game at Nipomo.

Santa Ynez quarterback Mike McCoy had a huge senior season. He threw 23 touchdowns and ran for 11 more in 2016.