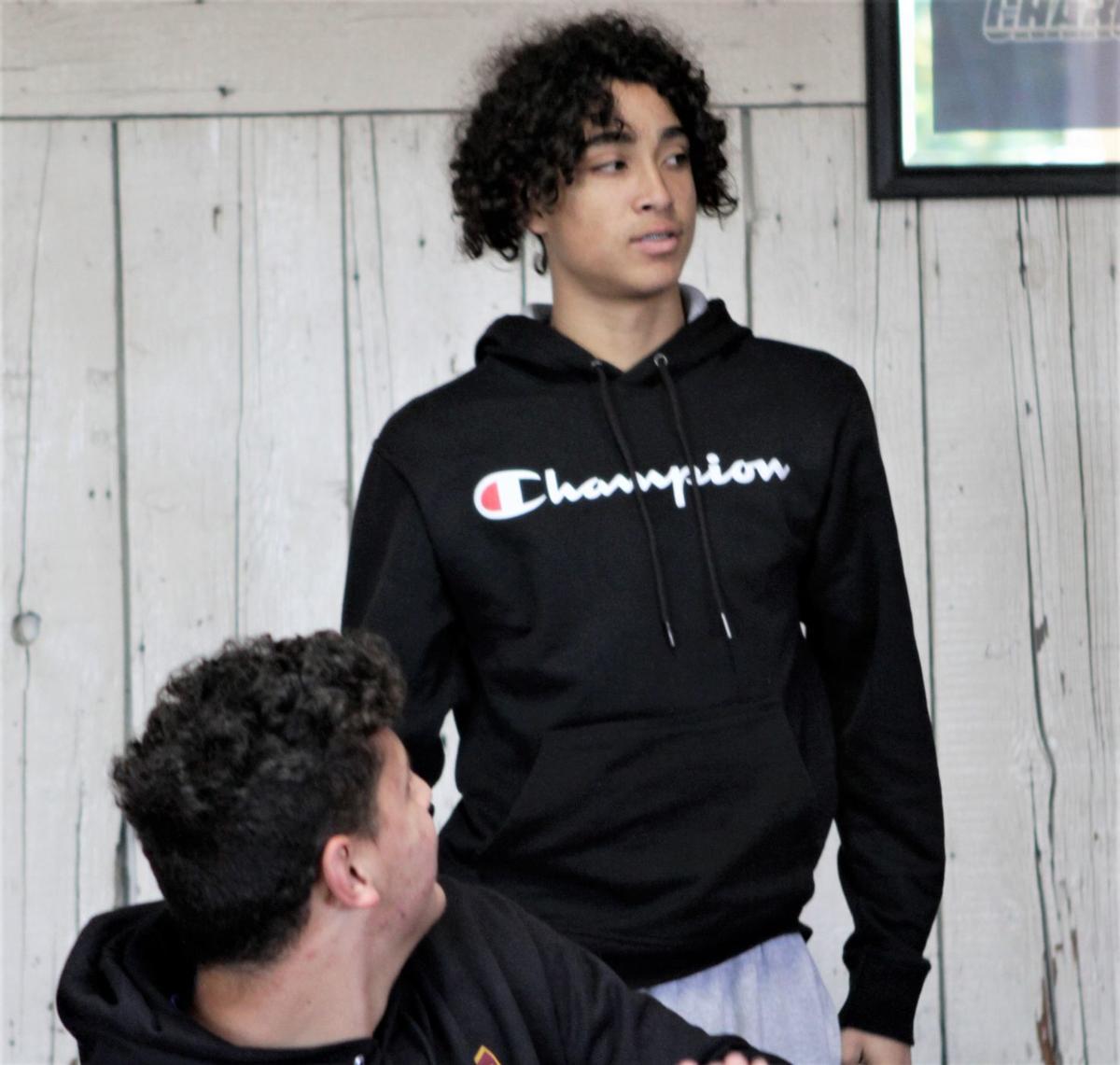 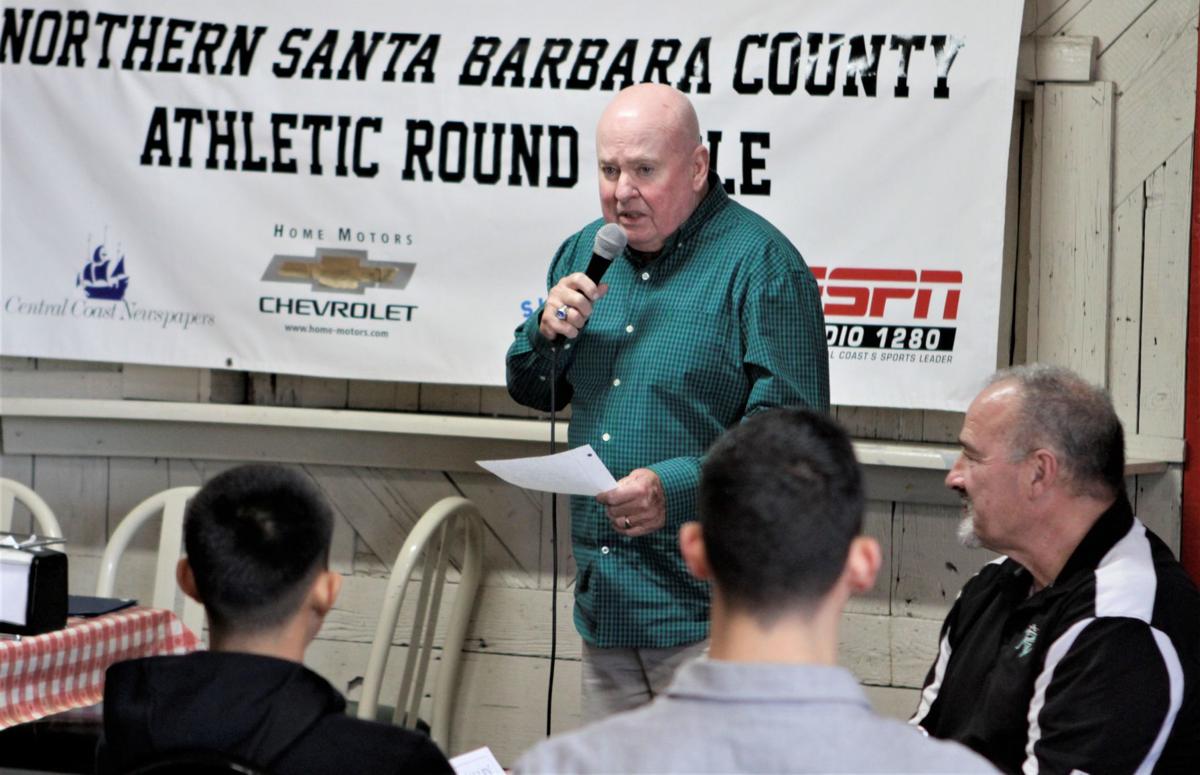 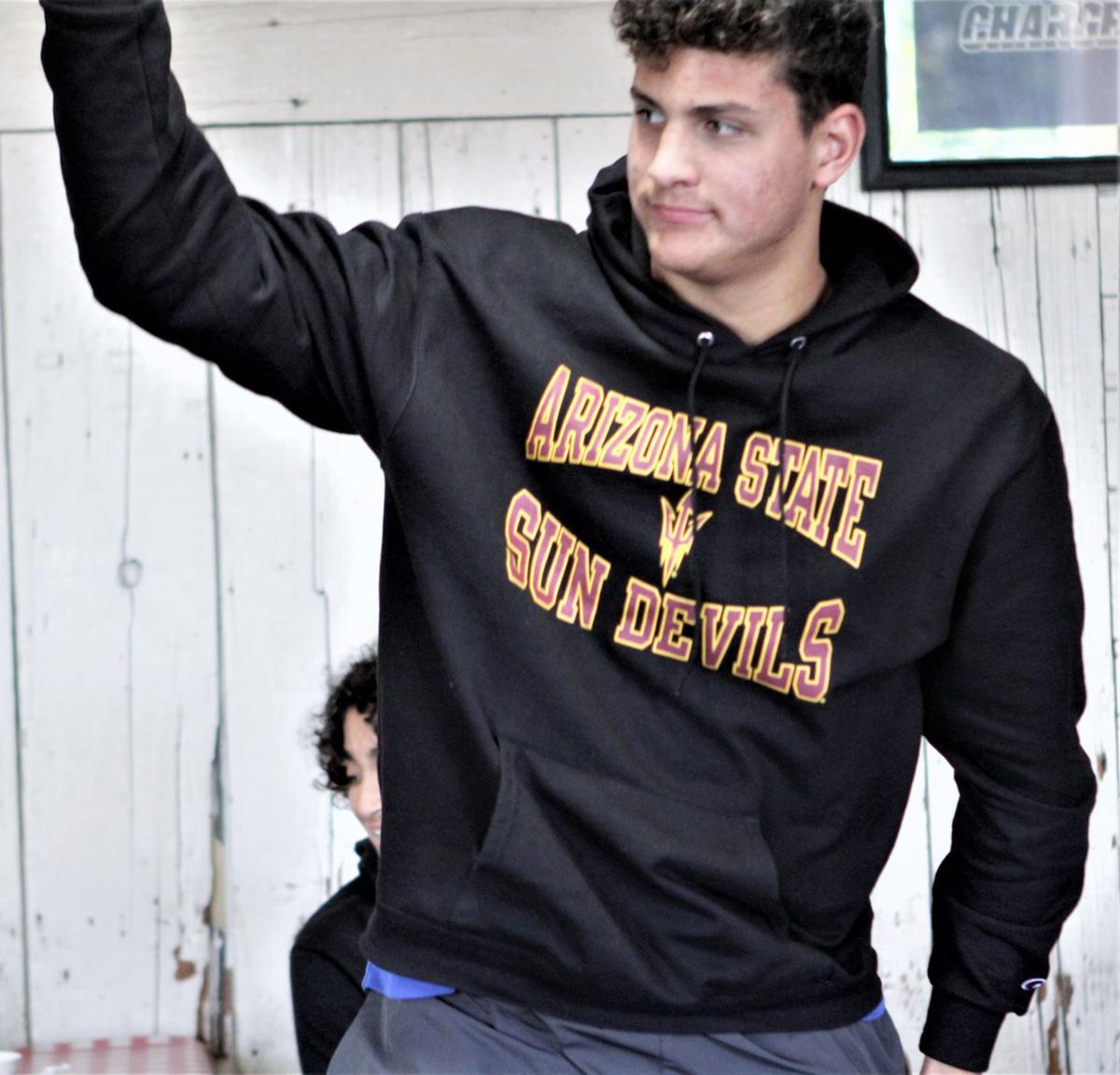 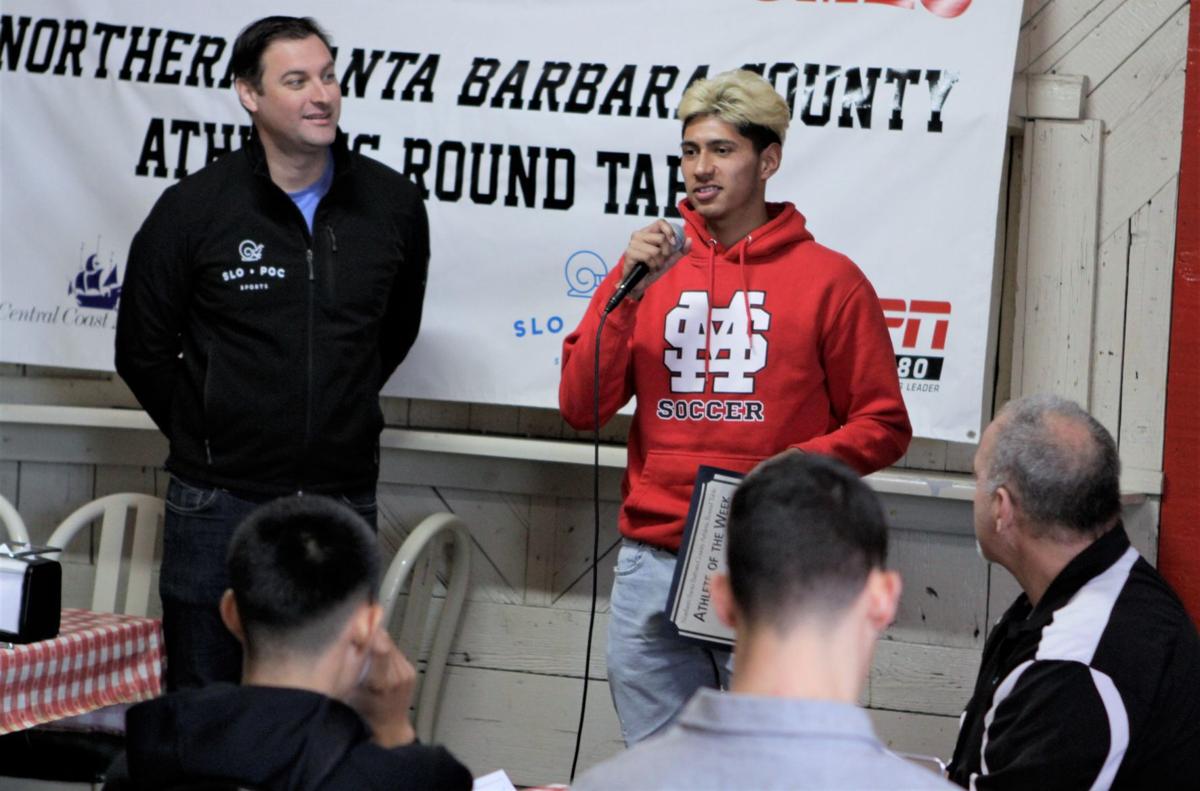 Santa Maria goalkeeper Ozzie Andrade speaks after being named the Athlete of the Week during Monday's Northern Santa Barbara County Athletic Round Table luncheon at Giavanni's Pizza in Orcutt. 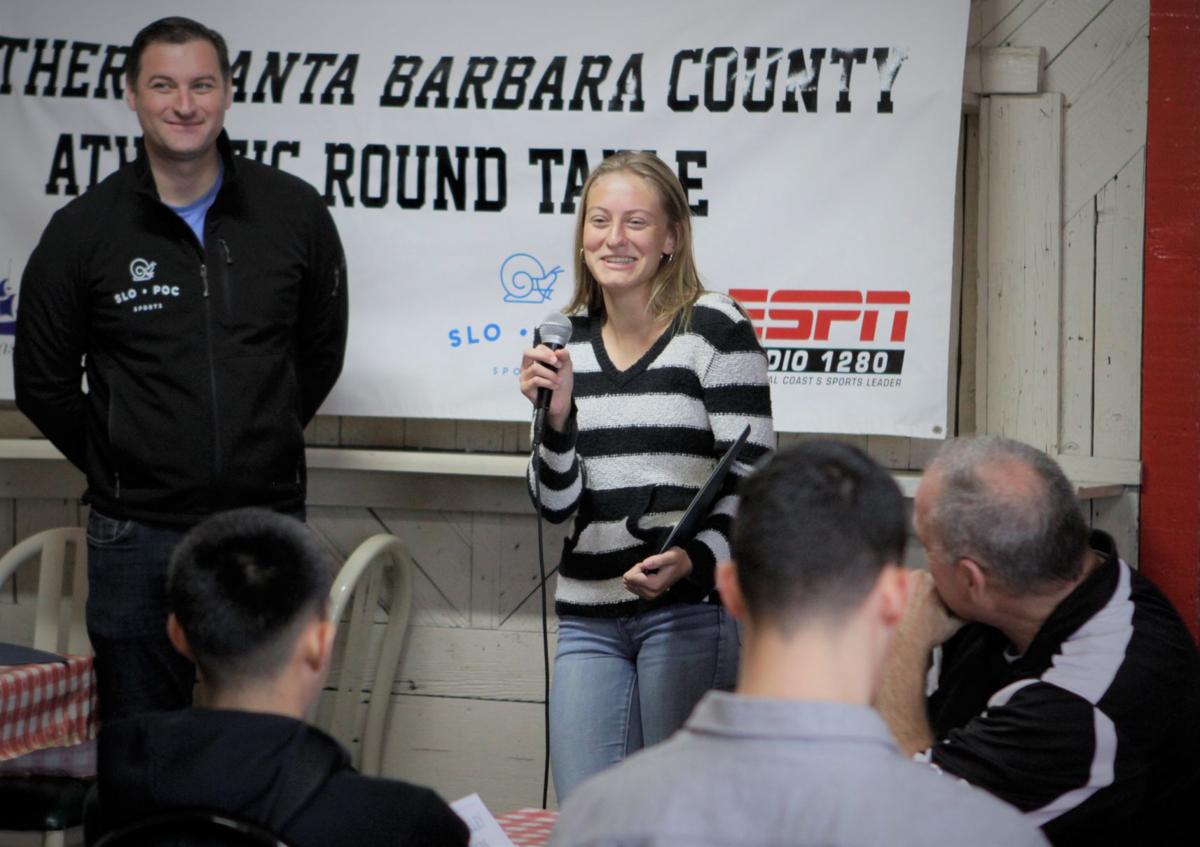 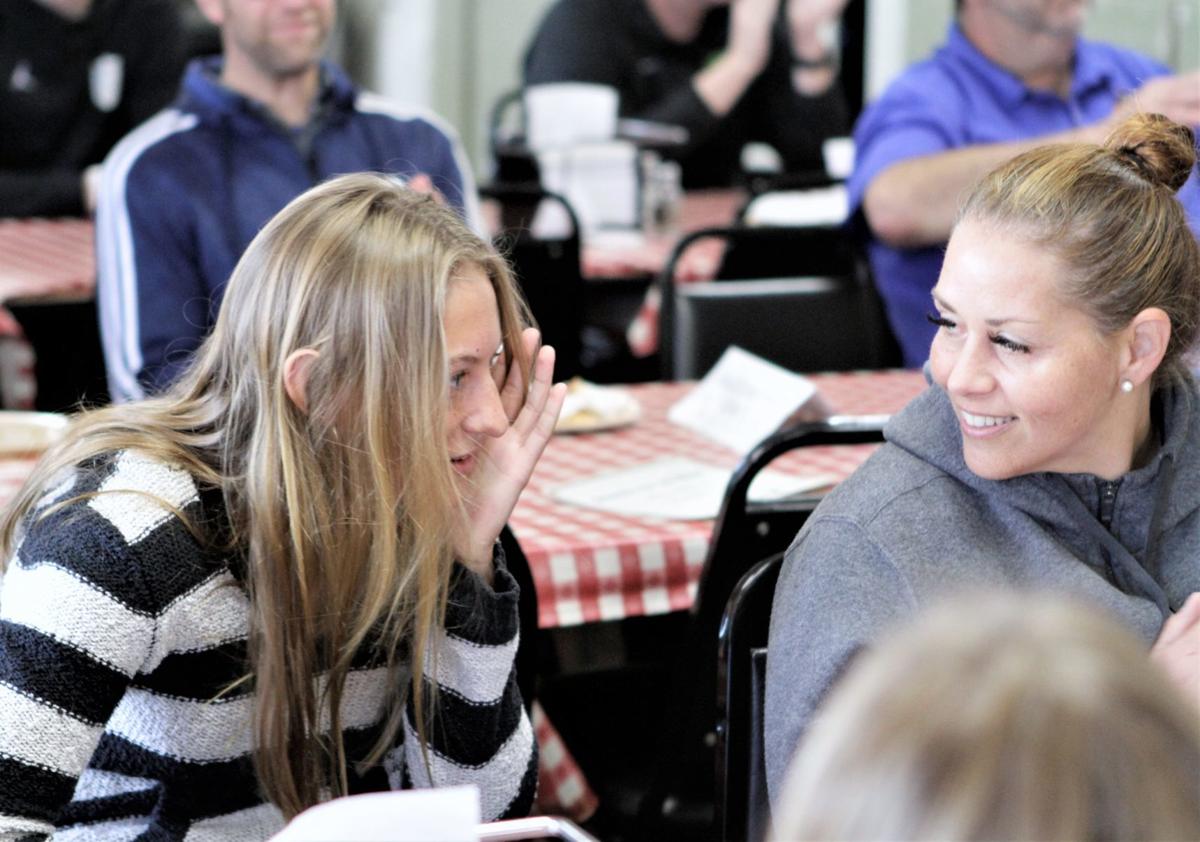 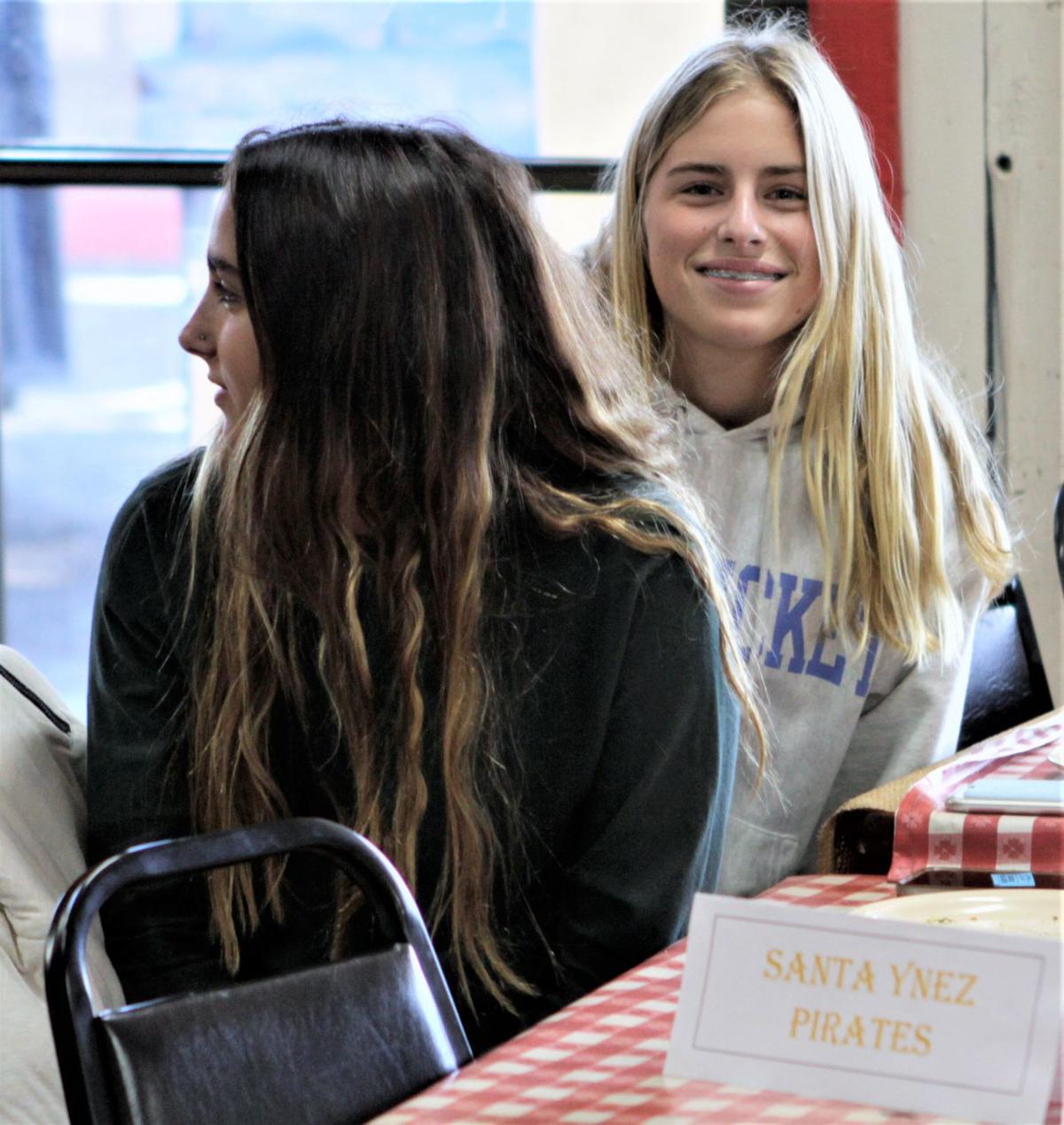 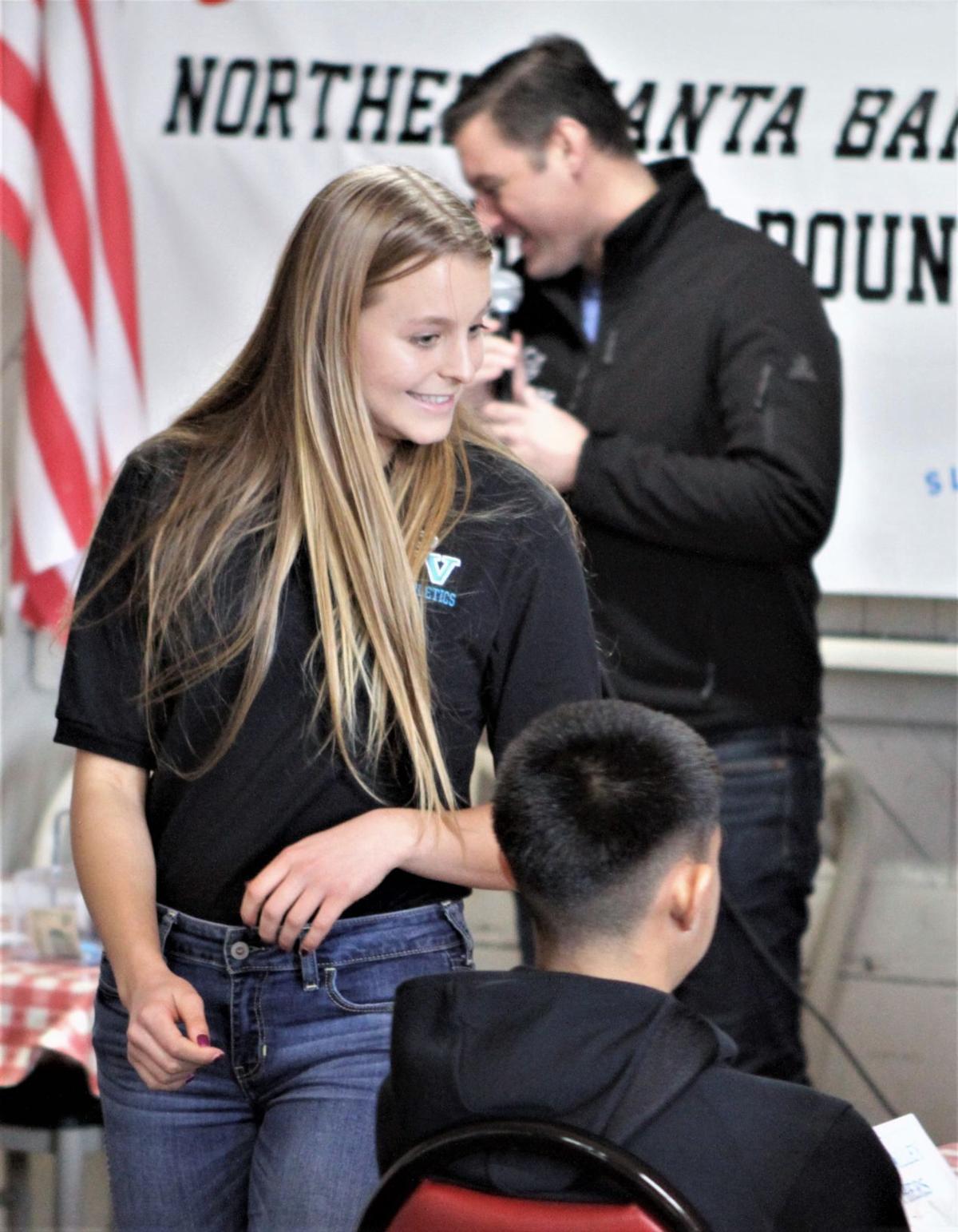 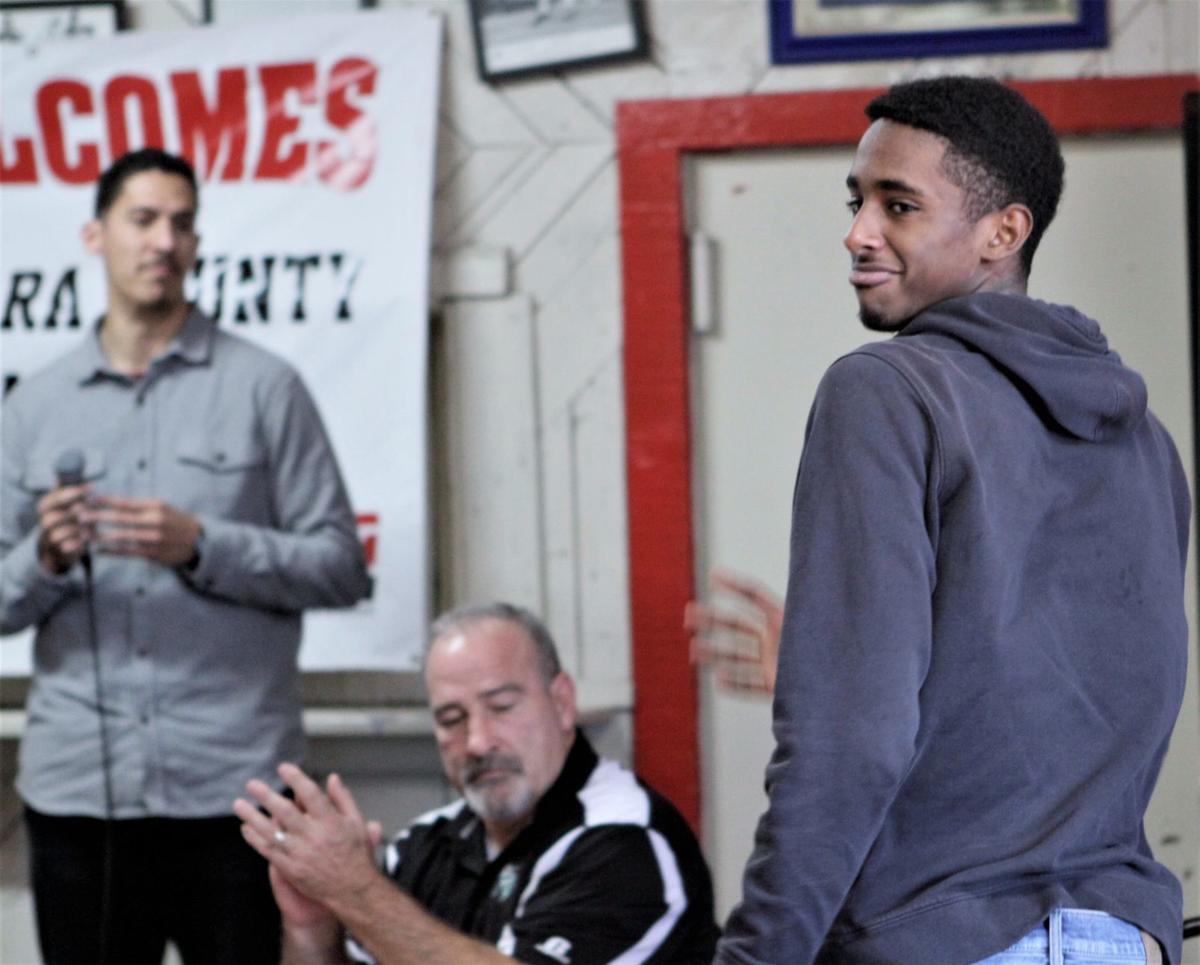 Ozzie Andrade's job is to make sure the ball doesn't find the back of the net.

Taye Luke's job is to make sure the ball does find it.

Both of them, though, earned Athlete of the Week awards at Monday's Northern Santa Barbara County Athletic Round Table.

Andrade, the goal keeper on Santa Maria High's soccer team, was named the Male Athlete of the Week.

Photos: Check out the scenes from Monday's Round Table luncheon

Luke, a goal scorer on the Santa Ynez girls water polo team, earned the Female Athlete of the Week award.

Andrade earned the honor after racking up 20 saves in his team's last three games, which includes a 1-0 shutout of Arroyo Grande last week in a critical Mountain League win for the Saints, who play at San Luis Obispo tonight in a matchup of two top CIF Central Section teams.

"I feel really grateful for this award because I've been working really hard, especially trying to motivate my team," Andrade said. "(The team) knows what's at stake and we want to achieve a lot this year with these high expectations that we have."

The Saints are 10-1-1 overall and 3-0 in Mountain League play. They're ranked 39th in the state, according to MaxPreps. San Luis Obispo is 10-3-1 and also 3-0 in league and ranked 27th in the state. The teams each beat each other last year as SLO won the league title.

"I still feel that loss from last year and I want to give something back to SLO for that," Andrade said.

Santa Maria soccer GK Ozzie Andrade is the Male Athlete of the Week for Northern Santa Barbara County. He stopped 20 shots over last three games and had a clean sheet in big league win over AG. Saints have @slohs_athletics Tuesday. #santamariatimes pic.twitter.com/E667Rc0vpl

Luke took home the Female Athlete of the Week honor after scoring seven goals apiece in two wins over Buena and Cabrillo. She also piled up three steals and six assists in those two games. Luke wasn't aware she was this week's winner until emcee Charles Sommer started reeling off her stats from last week.

"It was really scary, I didn't really expect it, it was really nice though," Luke said of winning the award. "I was definitely scared, I'm still shaking."

Luke said the win over Cabrillo last week was particularly important because the Conquistadores had beaten the Pirates earlier this year. Luke said the return of top player Ally Alderete has been key for the team taking a step forward.

"Having one of our main players back, Ally, we could all work together as a team and it's really nice coming back from the loss a few weeks ago," Luke said.

Santa Ynez water polo player Taye Luke is the Female Athlete of the Week for the Northern Santa Barbara County Athletic Round Table. She scored 14 total goals in wins over Buena and Cabrillo last week.#santamariatimes pic.twitter.com/XmFXuKS2fL

The Pirates and Conqs have played twice this year, but none of those games have been league contests, though they're both in the Channel League.

"We'll play them again soon in the actual league game and that's going to be a really great game," Luke added.

Pratt, the Pirates' goalie, had 15 blocks against Cabrillo.

Each winner and two guests were invited to a dinner, awarded with a trophy and a basketball.

"We're young, we've got some talent and we're growing," Maples said of his team. The Lions are 4-6 on the season and 2-2 in Coast Valley League play. They are at Maricopa Tuesday night in a CVL game. The VCA girls basketball team is 6-6 on the year and 3-2 in CVL play and is at Maricopa at 5 p.m.

"Tim has done a great job this year playing the forward position for us," said Tom Mott, the Knights' AD and basketball coach. "He helps us get off to a great start. Sam's also done a great job, though staying out of foul trouble is one of his big goals this year."

The Knights face their big league tests this week: They are at Arroyo Grande Tuesday night at 6:30 and host Mission Prep on Friday.

The St. Joseph girls soccer team is 5-7-1 overall and plays Arroyo Grande and Righetti in league matches this week.

"Selena is a senior and a center back, she's a real important part of our team. She gets good grades and wants to be a social worker," Barrett said of Garcia.

"We're doing well, we have three wins and we play Mission Prep on Tuesday," Magni said. "That's looking like a really nice game."

"Jomar is a great kid, he works so hard and is learning a lot about the game," Rivera said of Soriano. "Ebba is a junior and there's not a time that you see him on the bench because he plays the whole game in every game."

The Panthers play at Santa Maria in an Ocean League game Tuesday night at 6:45 p.m.

The Bulldogs (13-5) play at home against Oxnard Wednesday and on Friday the Bulldogs play at Cuesta.

Dykema noted that the Hancock men's players received their grades this week and the team averaged a 3.3 GPA.

But it wasn't a major league game or even a collegiate contest the large crowd was excited for.

No, the Lompoc supporters were there to see the Lompoc High baseball team play for a CIF championship.

Santa Maria goalkeeper Ozzie Andrade speaks after being named the Athlete of the Week during Monday's Northern Santa Barbara County Athletic Round Table luncheon at Giavanni's Pizza in Orcutt.