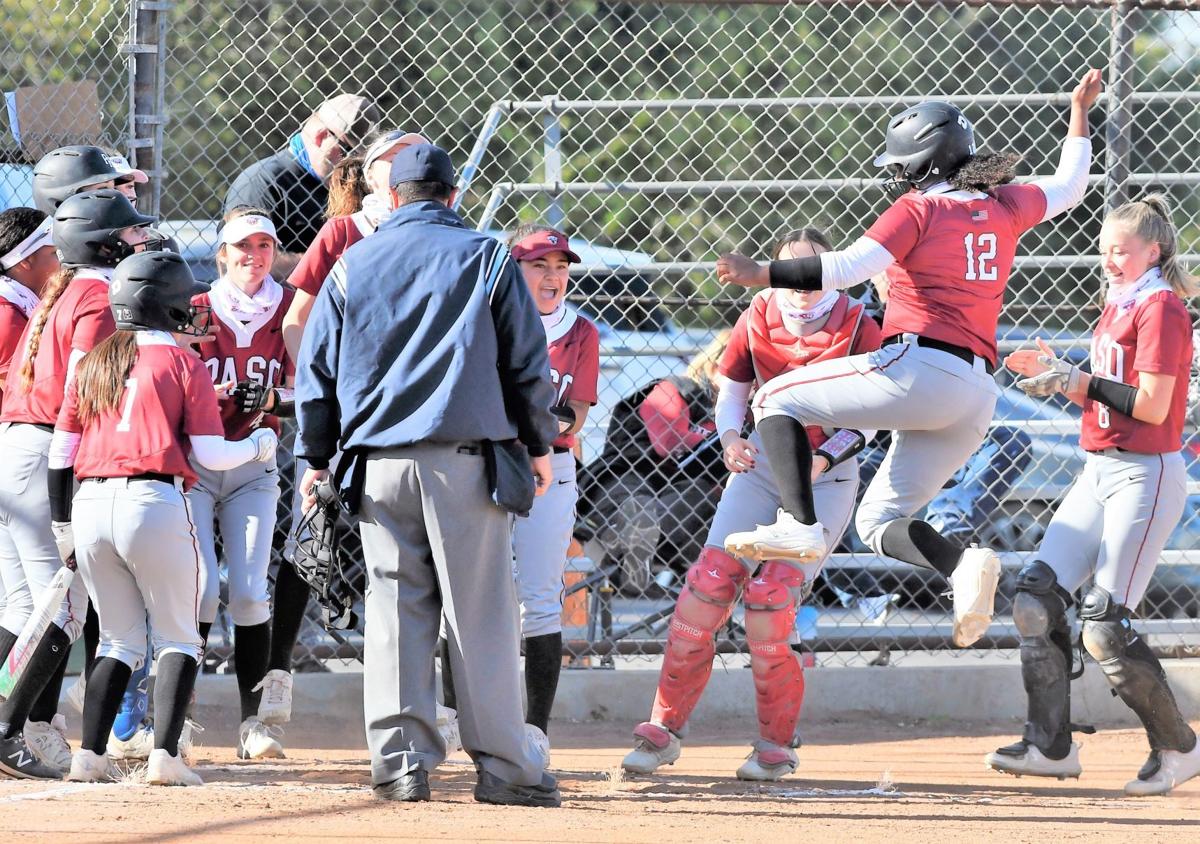 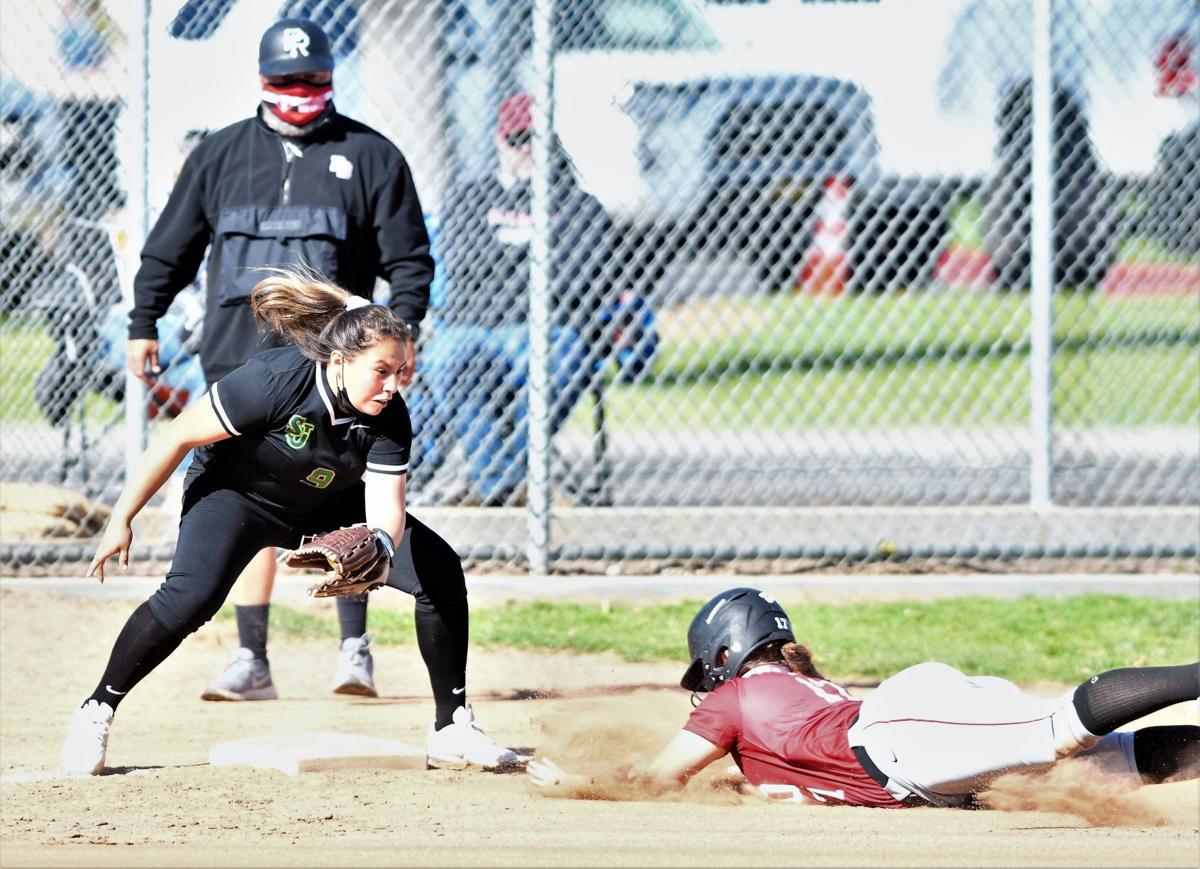 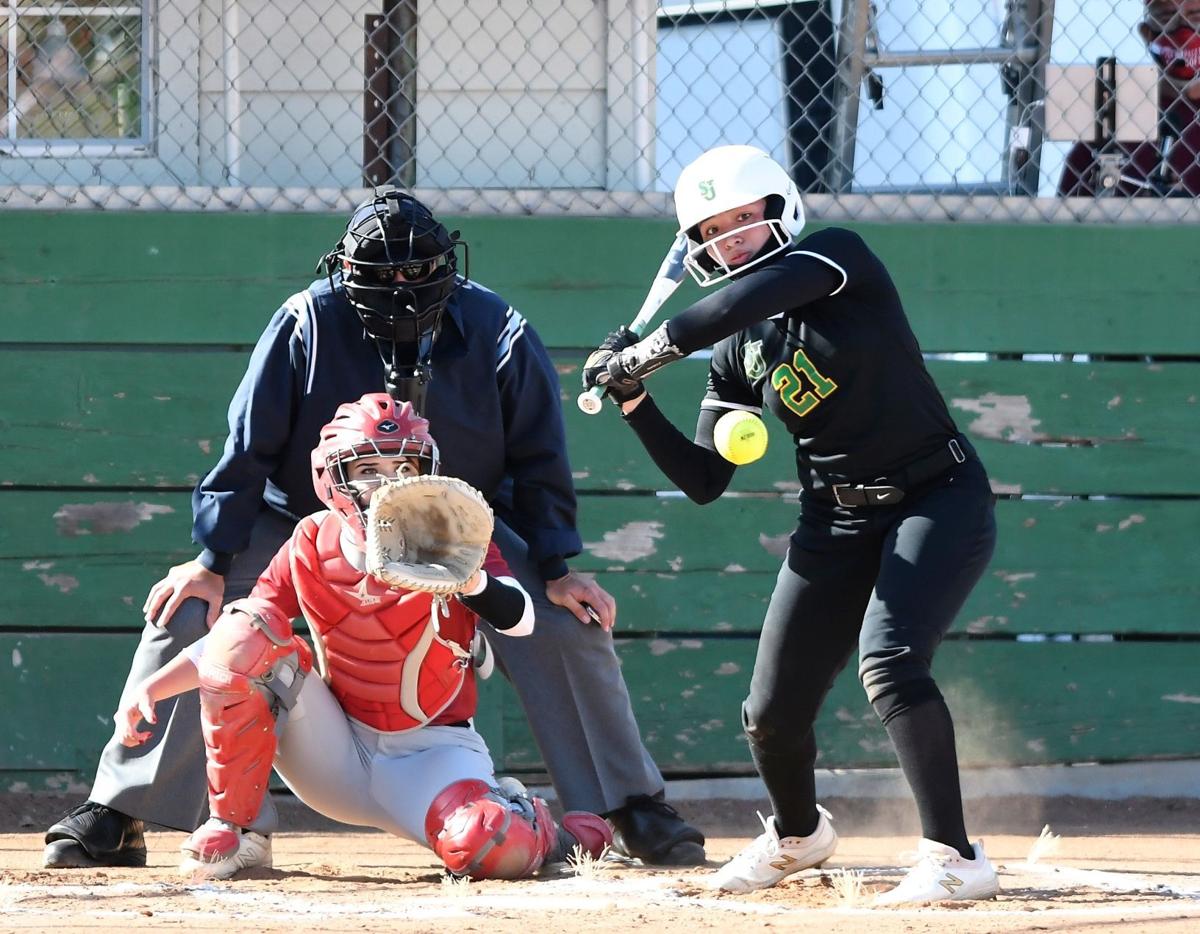 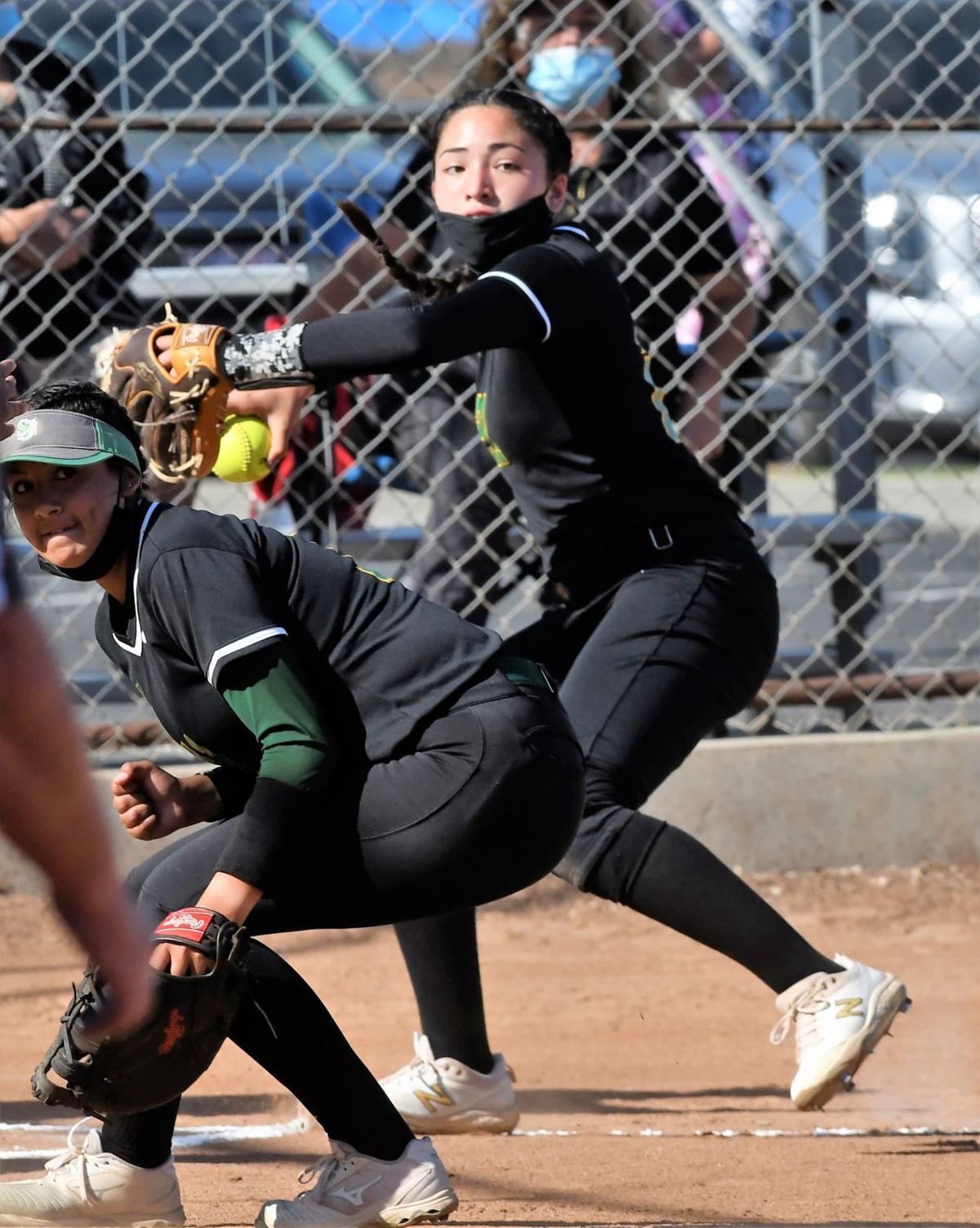 St. Joseph's Dezirae Rodriguez throws to first base for an out during Wednesday's game against Paso Robles at St. Louis de Montfort.

After St. Joseph's softball team scored a 9-8 win over the Bearcats last week, Paso Robles evened the score in a game at St. Louis de Montfort.

Paso Robles hit two home runs and Jaiden Ralston nearly shutout and no-hit the Knights before the Bearcats came away with a 12-2 win in Orcutt.

VOTE: Miller, Ast, Canley, Stineman, Nunez among those up for Player of the Week award

Ralston carried a no-hitter into the sixth inning. St. Joseph's Dezirae Rodriguez, the Knights' leadoff hitter, got the lone hit for her team with an out in the sixth. Rodriguez drove in Anissa Ordonez with a line drive double to center field.

The game was called after the Knights hit in the bottom of the sixth with the Bearcats up 10 runs.

The Bearcats' dominant win Wednesday is even more surprising considering St. Joseph came into the game 5-2 on the season, a record that includes the 9-8 win over the Bearcats on March 31. Ralston did not pitch in that game.

This week's game, played at the Knights' homefield at St. Louis de Montfort Church in Orcutt, was tied after the first inning as neither team scored. But the Paso Robles bats woke up soon after, with the Bearcats scoring once in the second and four times in the third.

Mia Chambers singled in a run on a fly ball to center, scoring Andie Dizon, for the game's first run.

Hannah Chambers then smacked a three-run homer in the third to give the Bearcats a 4-0 advantage. Dizon then hit a solo shot to make it 5-0.

St. Joseph's Briana Munoz came on to pitch in relief and stifled the Bearcats some, but they still tacked on two runs each in the fourth and fifth innings, before closing out the game with a three-run outburst in the sixth.

A Hannah Chambers single made it 6-0, Dizon singled in another run and Marissa Rovenstine made it 8-0 with a run-scoring double. Morgan Meidam then lined a single to right for an RBI, Emma Phillips drove in a run before Meidam singled in another for an 11-0 lead.

Stacey Ruiz singled in the 12th and final run for the Bearcats in the sixth. Rodriguez doubled home the lone St. Joseph run with one out in the bottom half of the inning. She then came around to score on a wild pitch to make it 12-2.

Ralston got a strikeout to end the game.

The Bearcats pounded out 16 hits in the win and are now 5-1 on the season. They're set to play at Pioneer Valley Saturday at 11 a.m.

The Saints played their first game since 2020 Wednesday and scored a win over rival Righetti.

Miki Hayashi shut out the Titans and struck out eight over 6 1/3 innings of work.

Kaitlin Rea had two hits for the Eagles. Kate Barnett threw a complete game for the Titans, striking out six.

Righetti swept a doubleheader at Morro Bay Wednesday, winning both games by a score of 3-2.

This is Miller's second complete game this spring. Miller threw a shutout on March 27 against Santa Maria then scored two touchdowns and had two interceptions in the football team's win over Paso Robles on April 2.

Gavin Long had the game-winning RBI in the second game.

Long, Bagby and Miller are all juniors.

Righetti is now 4-3 on the season.

The Eagles are now 8-0 on the season.

Ryan Tayman and Ethan Royal each drove in two runs. Zach Silva got the win, striking out five over four innings.

The Saints had three hits. Julian Ortiz had the lone RBI for Santa Maria. The Eagles pounded out 17 hits.

The Knights moved to 3-2 on the season with a shutout home win over the Spartans.

Jordan Harris went 2-for-4 and scored a run while driving in another.

Brian Lood and Travis Pratt pitched well for the Pirates, only allowing five hits in the loss.

Jackson Cloud played well in his catching debut, coach Warren Dickey sad. He went 1-for-2, scoring a run and driving in another.

The Santa Ynez squads had the medalists, but the St. Joseph teams both squeezed out a one-stroke win.

Bridget Callaghan earned medalist honors in the girls match with a 45. Callaway Winans was the medalist in the boys match with a 71. The boys played 18 holes, and the girls played the front nine at the Alisal River Course in Solvang.

Knights coach Al Garcia said the Rams scored on a deflection in the first half before the Knights tightened things up in the second half.

"The girls came through with flying colors to hold onto a tie against a very good team," Garcia said.

Zorah Coulibaly got the goal for St. Joseph with Alyssa Eaker providing the assist. Genesis Rodriguez made seven saves in goal for the Knights.

Santa Ynez improved to 3-0 on the season with a win over the Braves.

Luis Barboza and Brian Garcia each got a goal for the Pirates.

Barboza assisted on Garcia's goal to tie the game at the beginning of second half.

Grant Fieldhouse assisted on Barboza's goal from a set play to take a 2-1 lead.

Erick Jimenez scored on a penalty kick for the Braves as defenders Cesar Ortiz and Diego Rodriguez kept Lompoc in the game with solid defense. Emanuel DeLuna came off the bench provided some depth for Lompoc as Jimmy Villanueva played in goal.

Though Kaschewski and Berna have combined for nearly 1,200 yards in just those three games, St. Joseph coach Pepe Villaseñor points out that credit must be given to the Eagles' offensive line.

"The quarterback is dynamic. He has size and speed, his lateral movement in holes is fantastic," Villaseñor said Thursday, "but everything is based on the offensive line. The O-line does a good job of pulling, they read the defensive fronts properly. We have to neutralize the offensive line."

The Predictions: Does Templeton have a chance against St. Joseph?

The spring football season hits its stride this week, with a battle of unbeatens on deck and a matchup of two 2-1 teams. Though, there won't be a Big Game tin Lompoc.

St. Joseph's Dezirae Rodriguez throws to first base for an out during Wednesday's game against Paso Robles at St. Louis de Montfort.