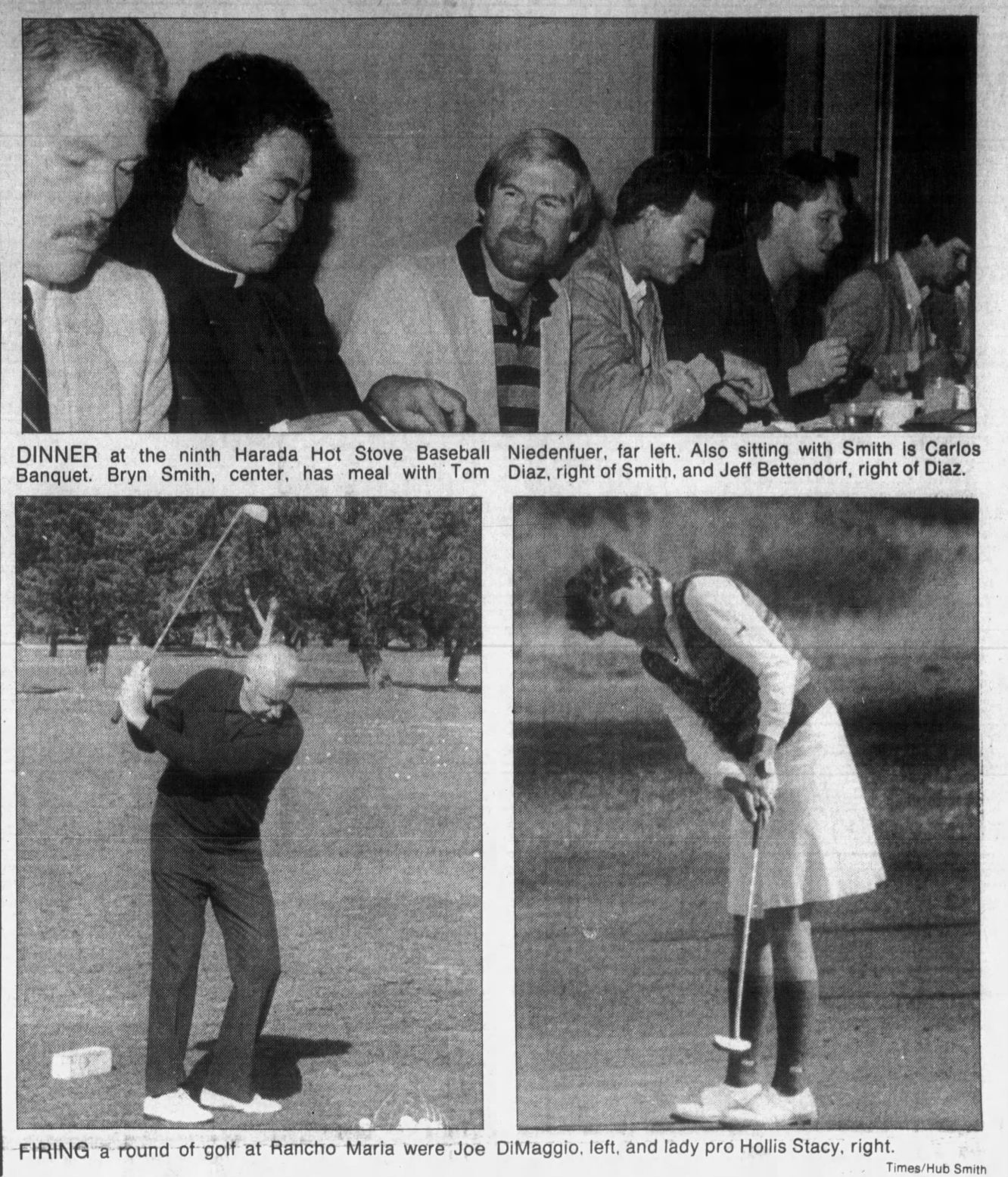 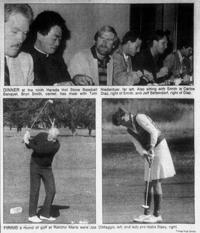 A selection of photos from the Jan. 13, 1985, edition of the Santa Maria Times highlights some of the attendees to the dinner and the golf tournament. 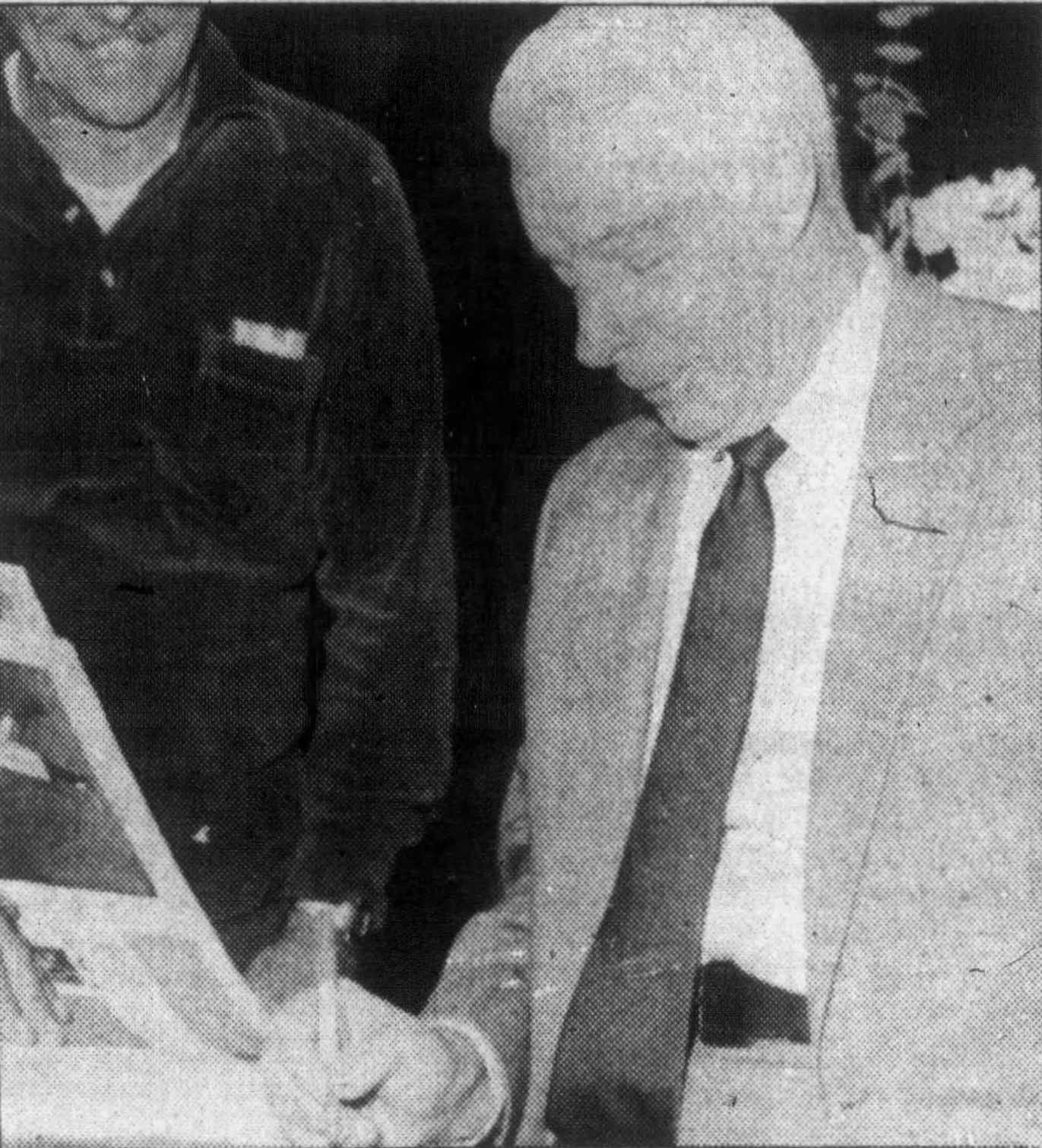 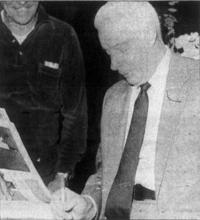 A selection of photos from the Jan. 13, 1985, edition of the Santa Maria Times highlights some of the attendees to the dinner and the golf tournament.

For the ninth time, Cappy Harada’s “Hot Stove” event was a whopping success when numerous baseball stars, both past and present, came to the Elks Lodge in Santa Maria to salute Cappy’s annual baseball banquet and to hear what Joe DiMaggio had to say.

Players turning out for the event, held on Jan. 10, 1985, included Santa Maria’s Bryn Smith, Hank Sauer, Mike Scioscia, Atlee Hammaker, Bobby Bonds, Ron Robinson, Tom Neidenfuer, Kent Bachman, Jeff Bettendorf, Carlos Diaz and, of course, the Yankee Clipper, DiMaggio. Pete Rose, who had come for the past seven years, stayed at home with a nasty case of the flu. His telegram, explaining his predicament, also said that he was already looking forward to next year’s event.

With Ed Zuchelli as master of ceremonies, all of the speakers told stories, but the one that caught the attention of everyone in the room was that of the living legend, DiMaggio.

Giving the local crowd a perspective of baseball in the 1930’s, '40’s and '50’s, he told many stories, one of which was particularly interesting.

He explained how his brother, Dom, once robbed him of six RBIs in one game while he was fighting for the RBI title. Dom DiMaggio made two spectacular running catches while Joe DiMaggio was hitting with the bases loaded.

“Before the game I had asked my brother over for dinner, and after the game I went home. When Dom arrived, we didn’t really talk about the game, that is, though, until about 5 minutes had passed. Then he just came out and said, ‘Joe, I couldn’t have gone another inch for those balls.’ Then he needled me for the rest of the night,” remembered Joe DiMaggio.

The Hall of Famer also predicted that someone would come along, someday, and break his 56-game hitting steak record. “Yes, I think that record will be broken. What record hasn’t? Sooner or later, someone like Pete Rose or Ricky Henderson will come along and break it.”

Three Dodger players, Scioscia, Niedenfuer, and former Hancock pitcher Diaz, were at the dinner. Scioscia joked with the priest who had spoken to him earlier in the evening. “The priest said that he was praying for me last year (when Scioscia was on the disabled list). I asked him about ’82 and ’83. I think that he was praying for Steve Yaeger (Dodger catcher) then.”

Giant pitcher Hammaker talked about his team’s chances in the approaching season, “I think we have the capability of winning it all.”

Giant great Bonds was also in attendance. The former slugger summed up his feelings for his sport: “I think baseball is the greatest sport in the world. I tried to get away from it for two years, but I couldn’t stay away.”

Bonds later became the hitting instructor for the Cleveland Indians.

Harada, like DiMaggio, had several stories to share with the crowd at the Elks Lodge. He teased former White Sox outfielder Sauer. “His motto was always, ‘I got it, but you take it.’”

Harada also thanked the people of Santa Maria for supporting the event.