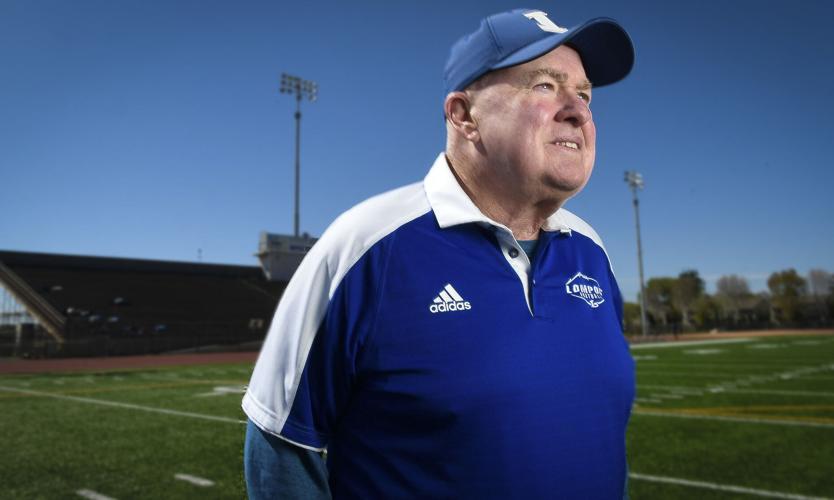 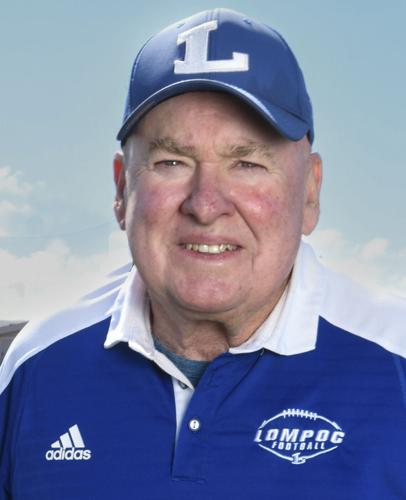 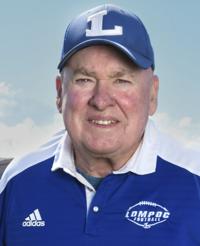 Dick Barrett isn't shy when boasting about the accomplishments of Lompoc High School.

Barrett, though, is quite humble when talking about his part in some of those successes.

Barrett, who will be inducted into the Northern Santa Barbara County Athletic Hall of Fame on May 18, led the Braves to their first CIF football title in 1990, coaching the famed team led by future NFL running back Napoleon Kaufman.

Round Table: Danica Black and Zach Liljenquist named Athletes of the Week

Barrett was the head football coach at Lompoc for five seasons, going 48-16 overall. The Braves had a stretch where they went 32-3 under Barrett, including back-to-back 13-1 seasons culminating with the CIF Southern Section Division VII title during that 1990 season.

Barrett, to this day, takes little credit for that historic run.

"I've been a pretty lucky person," Barrett said during an interview before his induction at the Round Table's end-of-year banquet next week. "I've been really lucky. I inherited some great players, like Tommy Thompson and Napoleon, guys like that. I inherited a great coaching staff."

That 1990 LHS team was the first to win a CIF title for the school after Mike Warren led the Braves to four straight runner-up finishes from 1977-80.

Lompoc went on to win four more CIF football championships, including back-to-back titles under current coach Andrew Jones in 2010 and 2011.

"Mike Warren really set the precedent before me," Barrett said. "He got to the finals four times and, unfortunately back then, there were fewer divisions and they ended up playing really big schools most of the time. Lompoc had some great teams under Mike Warren and if he hadn't taken that job at UCSB, I wouldn't be talking to you right now."

Warren was hired to resurrect the football program at UCSB and Barrett came to Lompoc High after serving as the offensive coordinator at Eastern Oregon State University during the 1984 and '85 seasons.

Barrett grew up in the San Jose area, but has roots on the Central Coast. The son of a minister, Barrett was born in Santa Maria at Sisters' Hospital. The family lived on East El Camino Street in town.

"Santa Maria was great. You'd get in dirt clod fights, play all day and come home when it's time to eat dinner," Barrett said. "It was a great little town when I was growing up."

After college, Barrett returned to James Lick High where he taught and coached football. He spent eight years there and then moved on to Truckee High School near Tahoe, taking over as the head football coach for four seasons. He led the team to a state title game in 1982 and was named the Nevada State Coach of the Year. He then went to Eastern Oregon State for two years before being hired at Lompoc High School.

Thanks in part to employing the Wing-T offense, Lompoc went 32-3 from the middle of the 1988 season to the end of the 1990 season. In that magical 1990 season, Lompoc beat Arroyo Grande 12-7 in a game played at Cal Poly in front of 9,000 people to win the CIF-SS DVII championship. Barrett was selected as the California AA State Coach of the Year by Cal-Hi Sports Magazine that year.

After stepping down as the head coach of the varsity football team, Barrett continued to serve in various roles at Lompoc High through 2008, working in the English and Physical Education departments. He was an assistant varsity coach for a couple of years and has stepped in to coach the freshman teams a number of times. He also spent three years as the school’s athletic director, from 2003-2006.

"There were so many people who lifted me on their shoulders and have had an impact on me," Barrett said.

Of his success coaching the Braves to their first CIF football title, Barrett says, "You know... it doesn't take rocket science to give the ball to No. 8 (Kaufman)."

Lompoc was 1-6 overall and 0-3 in Northern League play in Kaufman's sophomore season.

"We tried to make Napoleon into Tim Brown," Barrett said, referring to the Notre Dame and Oakland Raider wide receiver. "Tim Brown was the Heisman Trophy winner, he got the ball all the time. We gave Napoleon the ball, but not at tailback. He would catch passes, return punts and play wingback. We ran him in the fly and in the option. We were 1-6 and moved him to tailback and brought some kids up from the JVs. From then on, we went 32-3.

"That's a lesson in sticking to what you believe in. We had put in a completely different offense and we believed in it. That offense served us well for years."

"Moose played offense and defense," Barrett said of Mau. "He was a receiver, our punter and had 13.5 sacks on defense. As a team captain, he also kept everybody in line. I'll tell you, we were like the (1985) Chicago Bears, we had characters with character."

Barrett, though, says something besides wins and championships is what he's most proud of during his time in Lompoc.

"I'm still in contact with a lot of the kids I coached," Barrett says "I tell my coaches all the time, 'If you kick 'em in the butt on the field, make sure you pat 'em on the back by the time you get to the locker room.' In other words, if you're being negative to a kid, you better put your arm around them and pump them back up. That kid will then run through a wall for you. If all you're being is negative, then you're probably not going to get much out of the kid. That kid probably is not going to go the extra mile for you.

"I'm proud of the relationships I've had with kids over the years."

The Northern Santa Barbara County Athletic Round Table will be held at the Elks Lodge in Santa Maria on May 18. The Round Table will induct Barrett and another coaching legend and also announce the male and female Athletes of the Year and the male and female Scholar Athletes of the Year while also announcing the Joni Gray Heart and Soul award winner.

The Northern Santa Barbara County Athletic Round Table will induct him into its Hall of Fame at the organization’s annual awards dinner May 18.