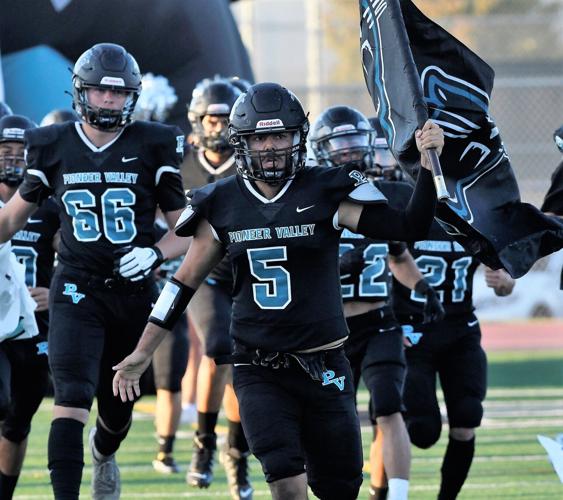 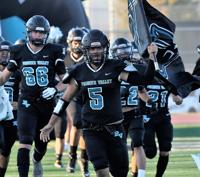 Pioneer Valley's Adrian Mora leads his team on to the field before a game against Righetti this season. Mora blocked the PAT kick after the last Atascadero touchdown, preserving a 21-20 Ocean League win for the Panthers against the league co-champion at home Oct. 28. He's been voted the Player of the Week. 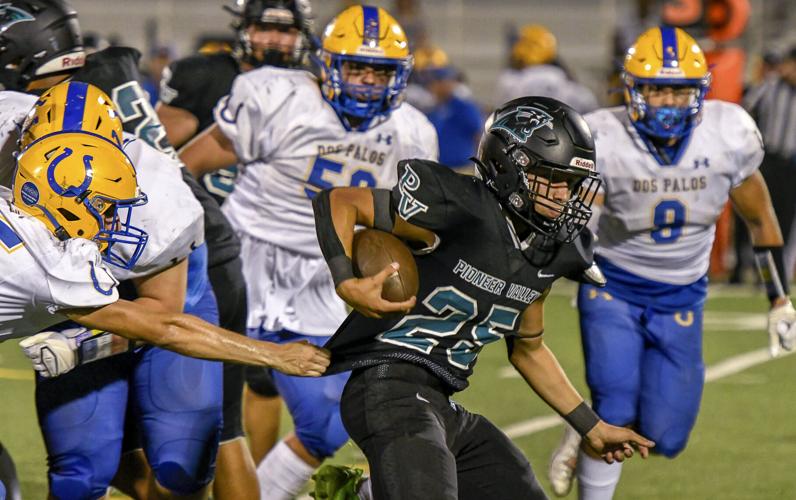 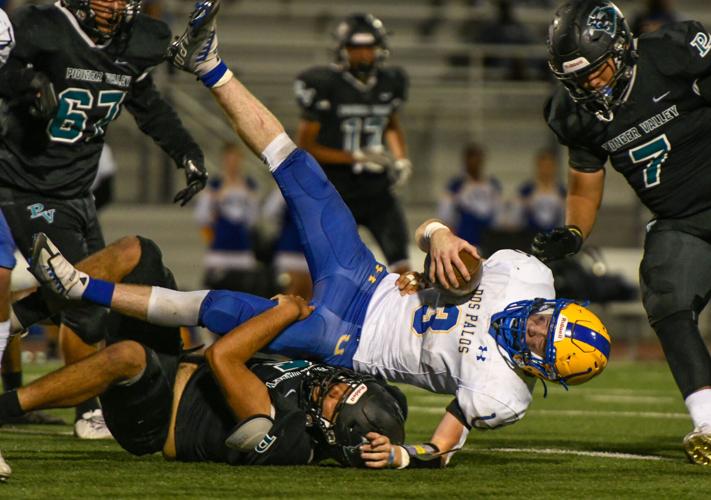 Pioneer Valley's Adrian Mora leads his team on to the field before a game against Righetti this season. Mora blocked the PAT kick after the last Atascadero touchdown, preserving a 21-20 Ocean League win for the Panthers against the league co-champion at home Oct. 28. He's been voted the Player of the Week.

Mora had 10 tackles and made a critical block of a PAT kick to help the Panthers score a 21-20 upset against co-Ocean League champion Atascadero in a league game, and regular season finale, at Pioneer Valley Friday night.

Jimenez rushed for 100 yards, including two touchdowns. No. 8 Pioneer Valley will host No. 9 Delano at 6 p.m. Friday night in the first round of the CIF Central Section Division 5 Playoffs.

Ortiz and Stouppe each won their singles matches then teamed for doubles wins as No. 10 Lompoc won 6-0 at No. 7 Paso Robles in the first round last Tuesday and 6-3 at No. 2 Fresno Christian in the quarterfinals Thursday in the  CIF Central Section Division 3 Girls Tennis Playoffs.

Ulonzo Gilliam caught eight passes for 66 yards and notched his 20th career 100-yard rushing game as the Aggies (4-4, 3-2) routed the Mustangs (1-7, 0-5) in a Big Sky Conference game at Health Stadium on the UC Davis campus Saturday.

Gilliam rushed 136 yards and two touchdowns as the Aggies beat the Mustangs for the sixth time in this series between the teams that dates back to 1939.

UC Davis has won three straight games after a 1-4 start. Cal Poly has lost six straight. The Aggies scored the last 28 points after the Mustangs trimmed an early 21-0 deficit to 28-17.

Gilliam, who surpassed the 4,000-yard mark in career rushing earlier this season, scored on a 59-yard run and went in from the Mustangs 1 in the first half. UC Davis surpassed the 50-point mark for the third straight week since its bye week earlier this month.

Cal Poly scored all its points in the second quarter then UC Davis pulled away.

Besides the three scoring marches, the Mustangs drove into Aggies territory four other times. Aggies interceptions stopped two drives, and the Mustangs turned the ball over on downs twice.

With 426 yards of total offense, Cal Poly surpassed the 400-yard mark for the fifth time in eight games this season, but UC Davis answered with 682 yards.

Brasch's 28-yard toss to Giancarlo Woods at the 10:15 mark of the second quarter capped an 83-yard, six-play drive. Brasch was 4-for-5 on the drive for 81 yards, including a 34-yarder to Chris Coleman on first down and a 14-yarder to Josh Cuevas on third down.

Brasch connected with Cuevas for a six-yard touchdown pass with 5:49 left in the first half. The 35-yard, seven-play drive was set up by the first UC Davis lost fumble this season, which was forced by David Meyer and recovered by Soni Finau.

Ohlsen's field goal at the 1:54 mark of the second quarter finished a 61-yard, nine-play drive. Brasch completions of 16 and 13 yards to Coleman and 21 yards to Zedakiah Centers extended the drive.

Brasch threw for more than 300 yards for the first time this season, this time completing 28 of 47 passes for 357 yards and the two touchdowns.

Coleman finished with 10 catches for 125 yards, becoming the first Mustang to reach double figures in receptions in a single game in 15 years. Ramses Barden caught 10 passes against Idaho State in 2007.

Cal Poly rushed for just 69 yards, 56 of those by freshman Paul Holyfield Jr. on 13 carries.

Cuevas made four catches and Centers had three.

UC Davis quarterback Miles Hastings connected on 22 of 27 passes for 425 yards and four touchdowns and earned a huge quarterback rating of 262.6. The Aggies rushed for 257 yards.

Meyer made 10 tackles, including nine solo stops, to lead the Cal Poly defense. Elijah Ponder had the lone Mustangs sack, and Donovan Saunders made his second career interception as a Mustang.

Cal Poly plays its final road game of the season next Saturday at Montana. The Grizzlies have fallen to 5-3 after a 5-0 start.

The Mustangs play their final two games of the year at home, hosting Montana State Nov. 12 and Portland State Nov. 19.

VOTE: Mora, Jimenez, McCormack, Monighetti among 12 up for Player of the Week