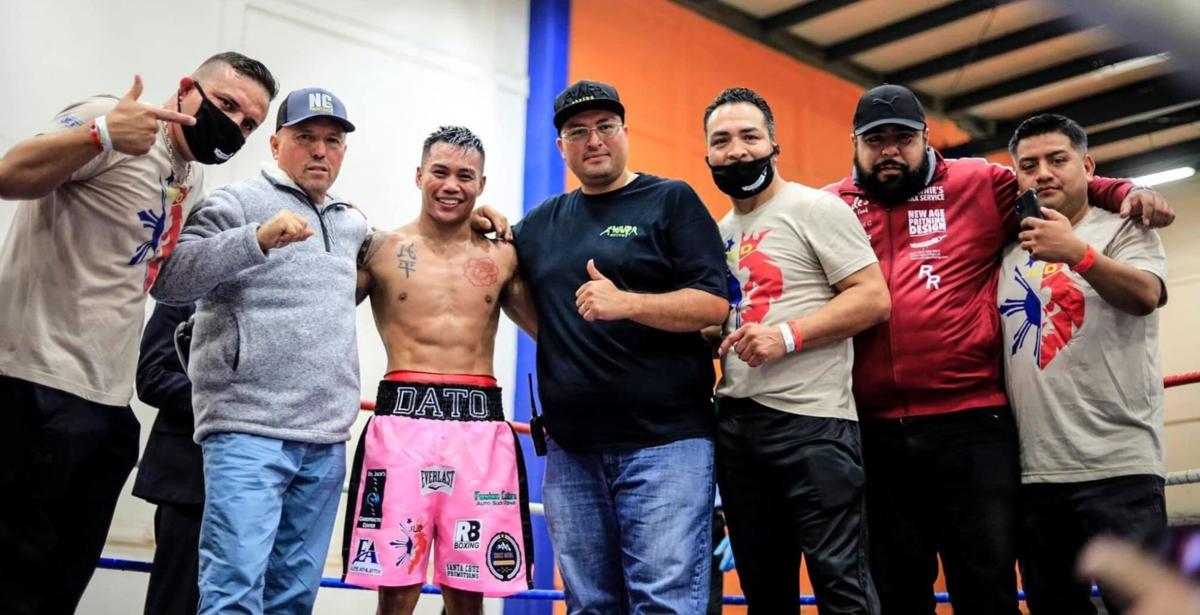 John Dato, third from left, celebrates his knockout win in Rosarito, Mexico with his team. Dato improved his career record to 16-0 with the fifth-round stoppage. 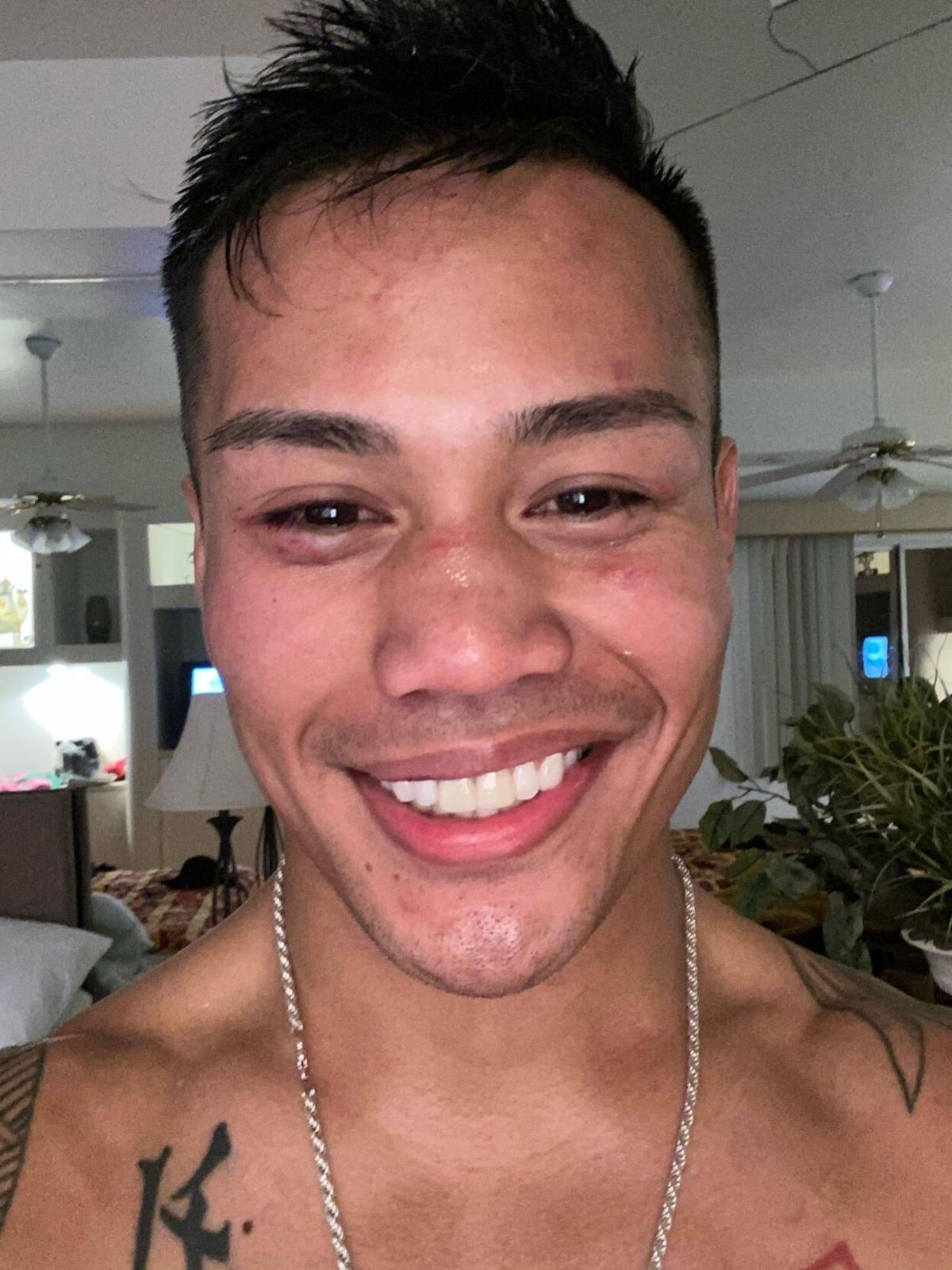 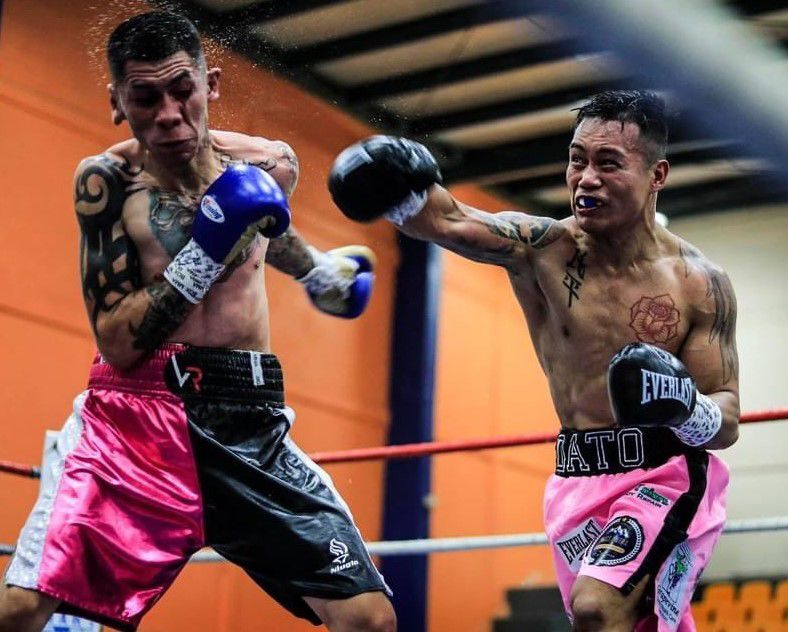 John Dato lands a punch on opponent Jorge Romero in a featherweight fight in Rosarito, Mexico. Dato improved his career record to 16-0 with the fifth-round stoppage.

John Leo Dato, the Santa Maria boxer, is ready to enter 2021 undefeated and leave 2020 in the rearview mirror.

Dato moved his career record to 16-0 with his second win of the year in Rosarito, Baja California, Mexico.

Amid the coronavirus pandemic, there haven't been many opportunities to fight in the United States for up-and-coming boxers. So both of Dato's fights have taken place in Rosarito. He's acquitted himself nicely both times, scoring knockout victories.

In his most recent fight, Dato took on 24-year-old Jorge Alberto Romero Ayala, who came into the fight with a 9-4 record. What's more, Romero held a six-inch height advantage. Dato is 5-foot-6 and Romero is 6-foot.

Dato scored a fifth-round KO, ending a competitive fight with a body shot.

"I got ready for this one like every other fight," Dato said. "I felt really good, my body was ready. Both of us were ready and came into it ready to brawl. This guy was 6-feet tall, I’m like 5-6. He had a lot of length and, in the second round, he got me a lot with his jab. He's taller than me and was using his length. He was smart. But I was smarter and learned to get aggressive."

"In the fifth round, I noticed he could take hits to the face, so I went to the body," Dato said. "I hit him with a right hand, a straight in the middle of his body, then I got him with a liver shot. He went down from there."

Dato said he weighed in about three pounds lighter than his opponent, who came in at around 130 pounds.

"This guy usually fights at lightweight and I fought at featherweight," he said. "I told my coaches, 'We are here in Rosarito, might as well take the fight.' He had a high KO percentage, with eight KOs in his nine wins. He was a tough opponent and he was young and fighting in his hometown.

"But I had more heart. I went in there with my heart and I beat him."

Dato said he's gotten used to traveling to Mexico for bouts. He and his team were tested for COVID-19 before the fight and he had his blood drawn to test before the bout.

"These promoters have a lot of rules in place for COVID. We have to wear masks until the fight starts. We follow all the rules then come out and brawl," he said.

Though he'll carry his unbeaten record into 2021, unless a last-minute fight materializes, Dato is ready to move on from a year that has saw a once-in-a-generation pandemic put its grip on the boxing world. Dato fought just twice this year after fighting six times in 2019.

"I felt this year has gone real slow for me," Dato said. "My advisor said, as far as 2021 is concerned, that things will be back to normal and we'll have a big fight set up."

Dato said he's followed the possible mega-fight between boxer Manny Pacquiao and Connor McGregor, an MMA star, and could possibly get on that undercard if a fight happens next year. Dato fought on a Pacquiao undercard last year in Las Vegas. Both Dato and Pacquiao are natives of the Philippines.

"If Manny and and McGregor are going to fight, hopefully I’m going to be on the undercard and make that happen," he said.

As 2020 winds down, Dato leaves with this message: "I want to thank God for keeping me and my family safe during these times. To all my sponsors, you know who you are, you guys have helped me so much during these tough times. I've got to stay up and keep moving forward. My fans in Santa Maria have been supporting me and we’ll keep going up and keep winning.

"We’ll see what the future holds for me."

The CIF Central and Southern sections canceled playoffs for football and other fall sports on Tuesday, noting that there's still hope those sports can be played this school year.

No question, Lompoc and Cabrillo are rivals. But, at the end of the day, the teachers, coaches and staff members are colleagues working for a …

John Dato, third from left, celebrates his knockout win in Rosarito, Mexico with his team. Dato improved his career record to 16-0 with the fifth-round stoppage.

John Dato lands a punch on opponent Jorge Romero in a featherweight fight in Rosarito, Mexico. Dato improved his career record to 16-0 with the fifth-round stoppage.