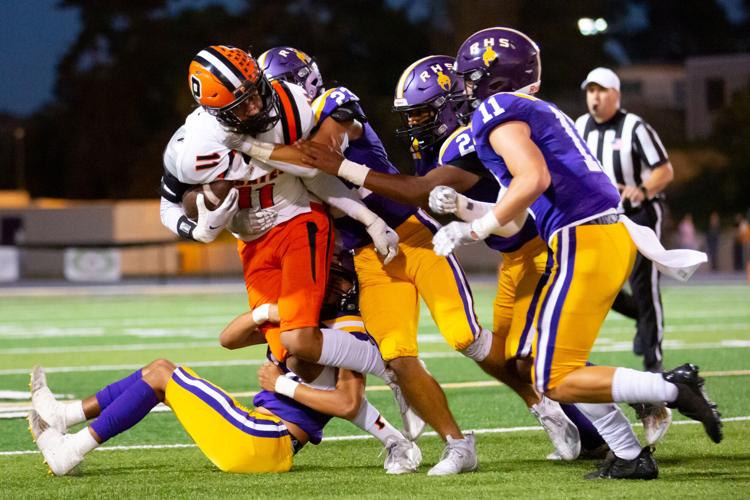 Santa Ynez wide receiver Daulton Beard (11) is brought down by a host of Righetti defenders during Friday night's matchup in Orcutt. 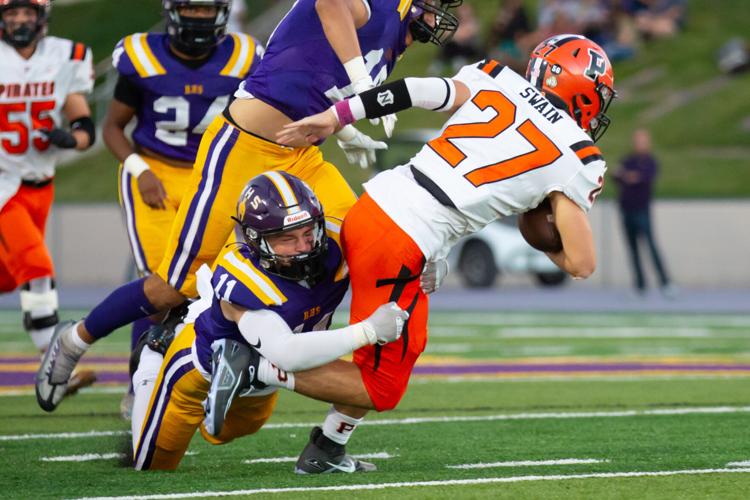 Santa Ynez running back Cole Swain (27) is brought down by Righetti High's Jacob Nelson (11) during Friday night's matchup in Orcutt. 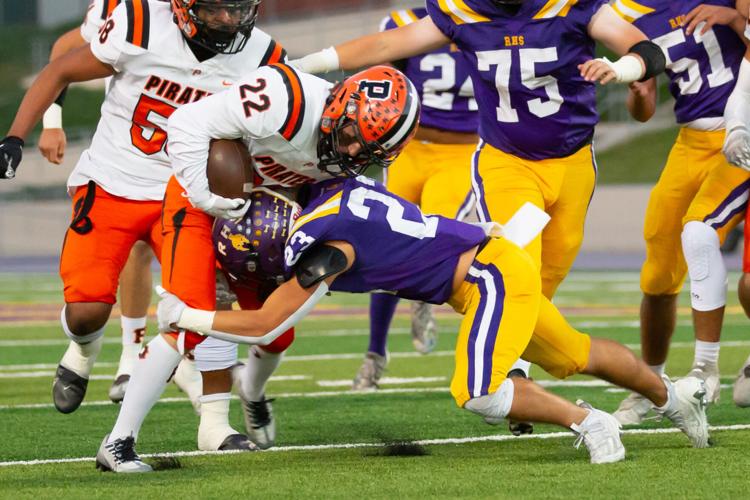 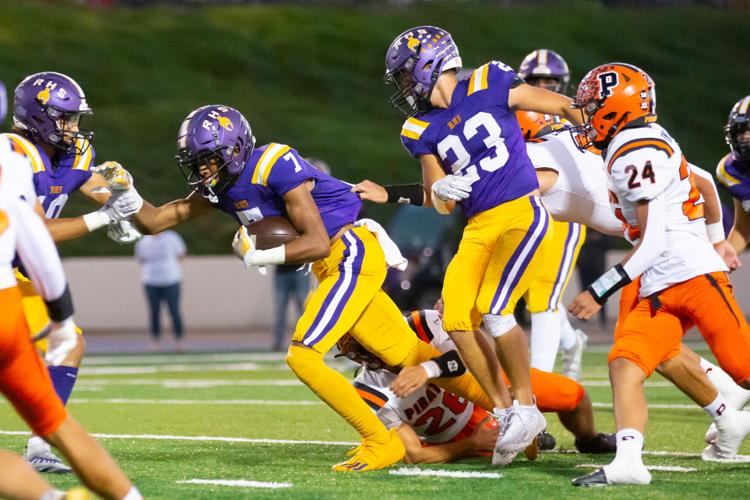 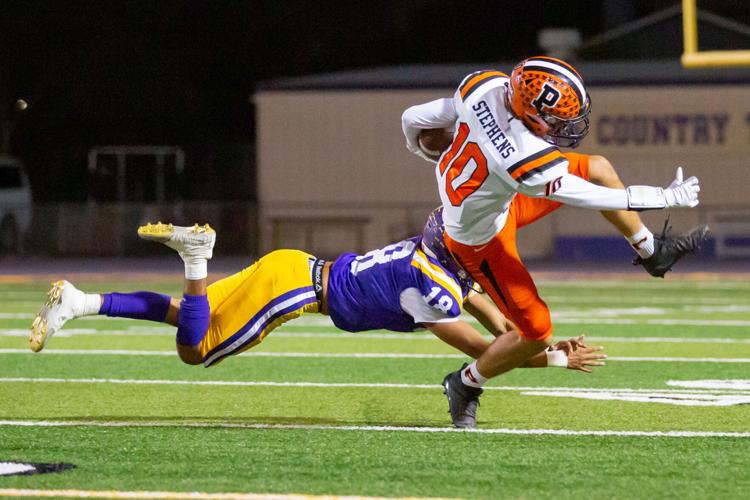 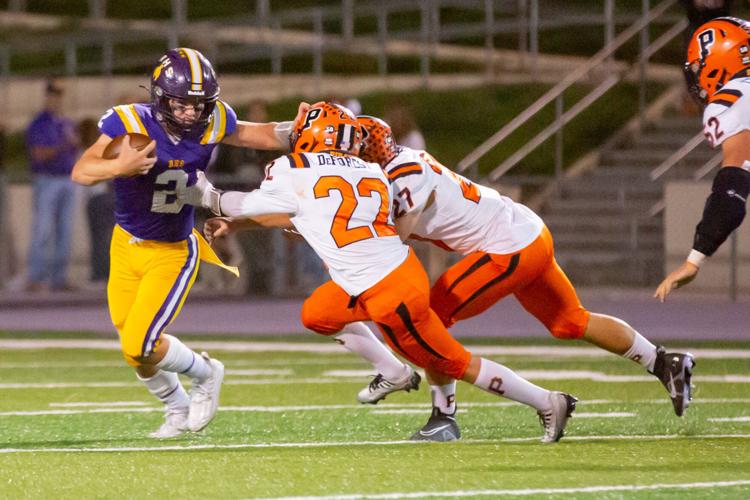 Santa Ynez wide receiver Daulton Beard (11) is brought down by a host of Righetti defenders during Friday night's matchup in Orcutt.

Santa Ynez running back Cole Swain (27) is brought down by Righetti High's Jacob Nelson (11) during Friday night's matchup in Orcutt.

With Santa Ynez facing a fourth down and 20 from the Righetti 32 on the first possession Friday night, Pirates quarterback Luke Gildred threw a strike to Dalton Beard near the Santa Ynez sidelines for a score.

That was an indication of how most of the rest of the game would progress. The Pirates finished most of their drives with scores, most of the Righetti drives fizzled out and Santa Ynez came away with a 31-11 Mountain League win at Righetti's Warrior Stadium on Righetti's Homecoming night.

The Pirates moved to 4-1, 1-1. The Warriors are 1-4, 0-2. Seniors Mariah Padilla and Vignesh Neerathalingam were crowned Righetti Homecoming Queen and King respectively at halftime.

Santa Ynez players and coaches seemed simply happy that the Pirates evened their league record after a frustrating 32-27 loss at home against Mission Prep last week in their league opener.

"We were very upset about that one," said Santa Ynez running back-outside linebacker Dallas DeForest.

A holding call did wipe out a 44-yard touchdown play on a Gildred to DeForest screen pass, but that didn't really matter. Santa Ynez scored on the drive anyway, with Gildred scrambling nine yards to the end zone and breaking the plane just before a defender knocked the ball out of his hands and out of bounds for what would have been a touchback.

"Tony had pretty severe COVID, but he's better now, he's on the back end of it and hopefully we'll have him back next week," said Garcia.

A lot of Santa Ynez linemen came over to visit Garcia afterward, exchanging greetings and hugs.

"I coached the Santa Ynez offense for two-and-a-half years, and I've spent a lot of time studying their offense," said Garcia.

"I love these guys. (Santa Ynez head coach) Josh McClurg has coached over there a long time, and he's such a quality coach who loves the game."

Santa Ynez scored touchdowns on drives of 59, 93 and then 84 yards for their last touchdown, which Gildred got on the nine-yard run in the third quarter. Andrew Davies followed with the last of his four successful PAT kicks. Davies finished the Santa Ynez scoring with a 35-yard field goal at the 4:06 mark of the fourth quarter.

Santa Ynez was without star senior tight end/defensive end Aidan Scott, who was injured at the start of the Mission Prep game last week. McClurg said he hopes Scott returns in a couple weeks.

Nolan Oslin intercepted Righetti quarterback Braden Claborn at the Righetti 43 with 32 seconds left in the first half. Two plays later, Gildred connected with Blake Smith for a 27-yard touchdown pass.

Claborn took a lot of punishment. The Pirates nailed him for 30 yards in losses. Claborn scored the Righetti touchdown, though, on a one-yard sneak with 34 seconds left. He connected with Isaiah Abrigo on a two-point conversion pass for the last points of the game.

With Santa Ynez up 14-0 after scoring touchdowns on its first two possessions, a Righetti drive fizzled at the Pirates 3. Andres Magallon kicked a 20-yard field goal.

"We're still trying to figure out what we do best," said Garcia.

"I know the score doesn't show it, but we're getting better and better each week."

Santa Ynez didn't have any players with flashy offensive stats Friday night, but a lot of players had solid ones, and that was enough for the Pirates to score plenty of points.

Gildred threw for 174 yards. He connected with Beard, the leading Santa Ynez receiver this year, eight times for 78 yards.

After the 32-yard touchdown play, Gildred mainly settled for hitting Beard and his other receivers with successful short passes that went for good yardage.

"(The short pass) was mainly what was working for us," said Beard. "We tried some long ones, but those mostly didn't work."

The short pass, "actually helped open up the run for us," said Beard. "Their safeties would play back, and that opened up the running lanes."

DeForest was the top Santa Ynez rusher with 59 yards. Eric Marmolejo ran for 50, Cole Swain had 49 more and Isaac Moran, an outside linebacker on defense who is the Pirates' season tackles leader, rushed for 41 yards.

"We had several guys combined rush for what would add up to a monster rushing game for one guy," said McClurg. Santa Ynez racked up 226 yards on the ground.

Claborn threw for 175 yards, Abrigo ran for a game-high 90, and Abrigo caught four passes for 61 yards. Abrigo also had 107 yards in kickoff returns, but the Warriors couldn't get anything going consistently, save for the two drives that ended in scores. Righetti punter Gilberto Chavez was effective again.

Besides their work on offense, outside linebackers DeForest and Swain, along with Nick Crandall, helped the Santa Ynez defense keep the Righetti offense in check.

"A lot of guys are swarming the football. That's what we wanted," said McClurg.

"The Righetti offense is tough to adjust to. They adjusted to the fact that we were giving them the sweep."

Abrigo ran for several decent gains on sweeps to the short side of the field but, "We wanted to force them out of bounds and not give up the big 20-yard plays," said McClurg. The Pirates succeeded.

Before the game, the Warriors honored Elvira Rodriguez, a young child who has undergone multiple heart surgeries.

"She's such an inspiration for all of us," said Garcia.

High School Football Hub: Get scores, photos and more on this weekend's games

In other Mountain League action, Paso Robles edged Lompoc 34-33 in the Bearcats' home opener, knocking the Braves from the unbeaten ranks in the process.

The Greyhounds pulled off a second half rally for the second straight week. Down 24-7 at intermission at Santa Maria in an Ocean League opener, the Greyhounds eventually won 28-24.

In Mountain League action next week, Santa Ynez will host St. Joseph and Righetti will play at Lompoc. Both games are set for a 7 p.m. kickoff next Friday night.