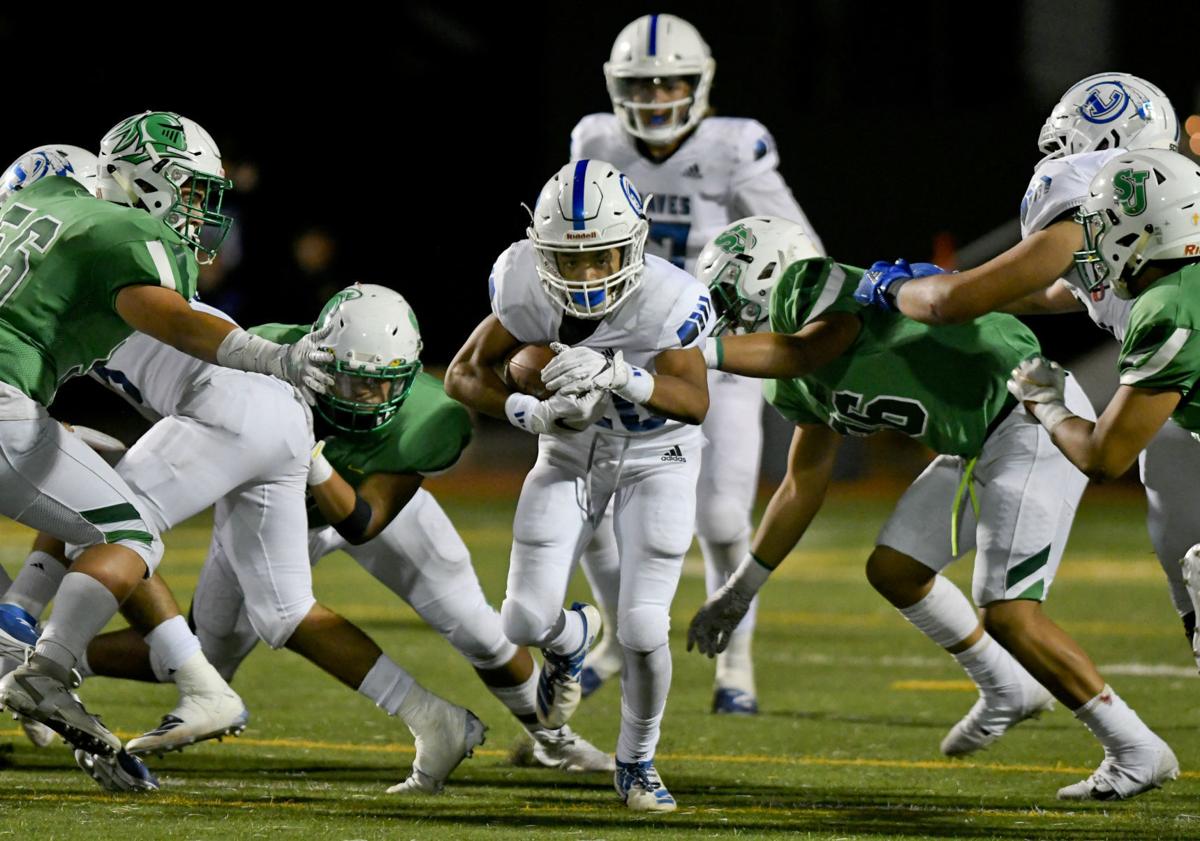 Lompoc's Sheldon Canley Jr. carries the ball against St. Joseph on Sept. 27, 2019. Canley had 808 yards on 83 carries with 14 touchdowns last season as a sophomore. He's back and ready to carry the offensive load in 2021. 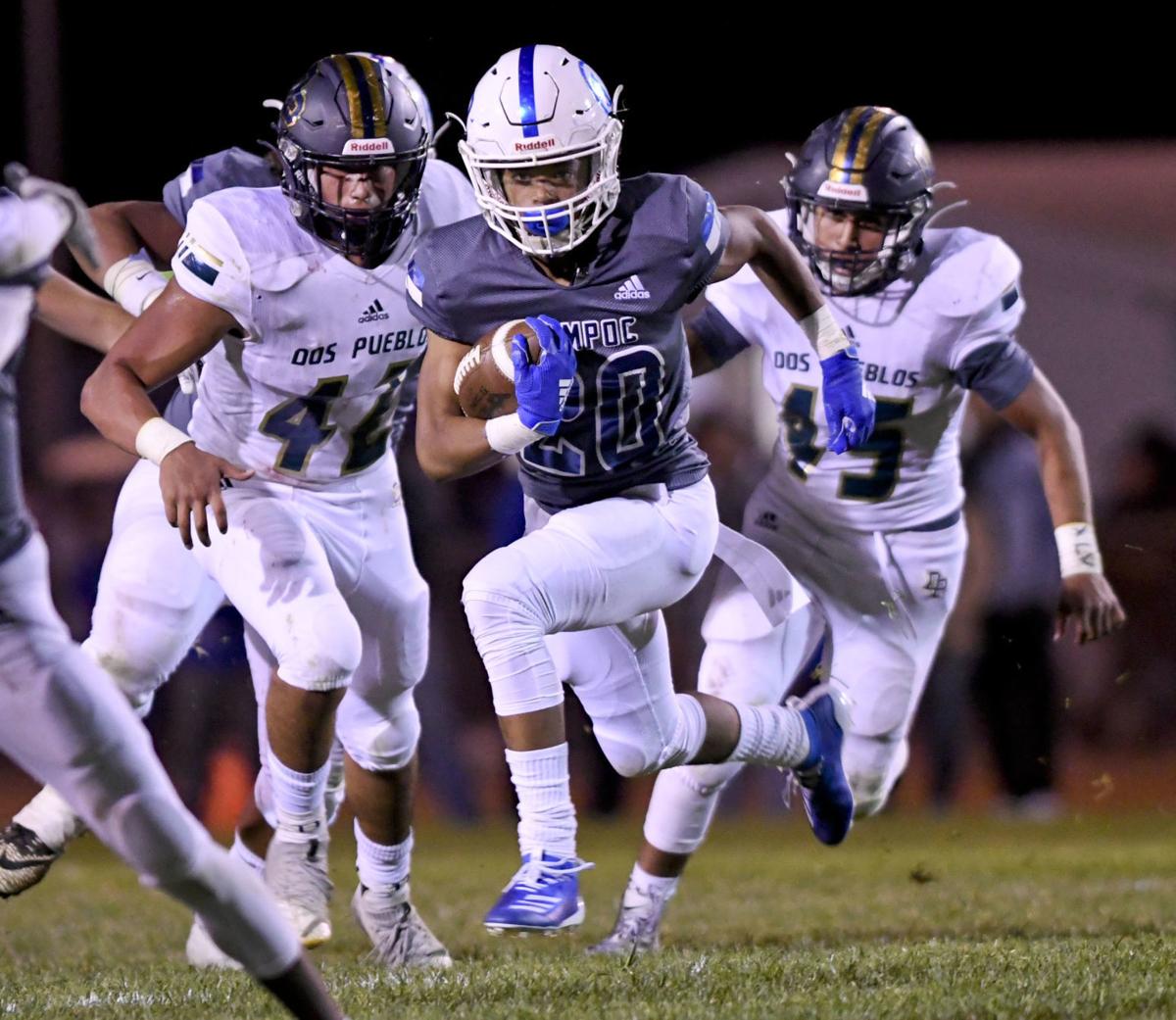 Lompoc's Sheldon Canley gets loose for a long touchdown run as Dos Pueblos' Josh Navarro and Daniel Santacruz chase during a game on Oct. 11, 2019. Canley had 169 yards on only 10 carries in the Braves' 56-0 win over Dos Pueblos last year. 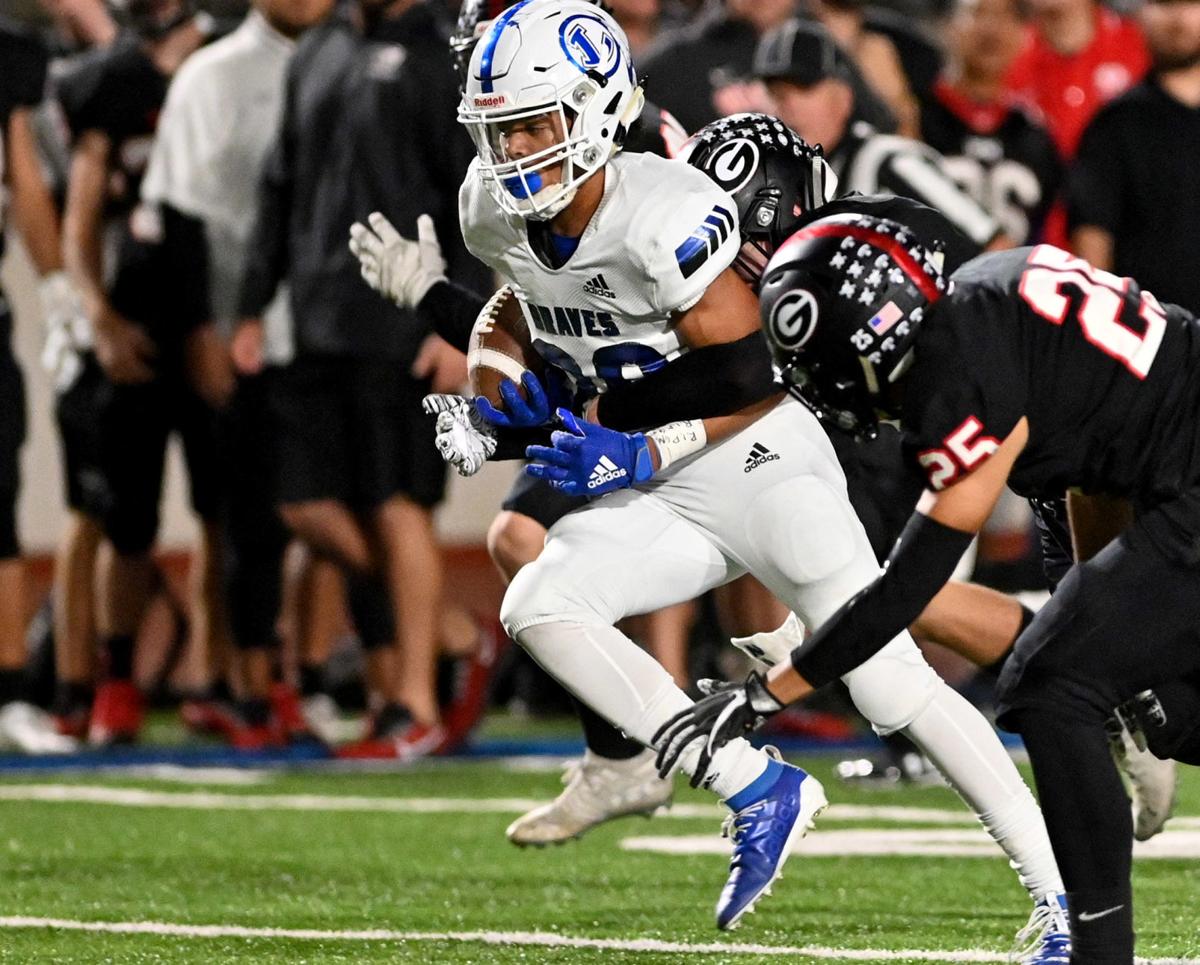 Sheldon Canley of Lompoc runs for a first down in the first half of a Division 5 playoff football game against Glendora at Citrus College on Nov. 8. Canley earned First Team All-Channel League honors as a sophomore.

Lompoc High and running backs go together like peanut butter and jelly.

Napoleon Kaufman, Sheldon Canley, Lavon Coleman, Toa Taua are all Lompoc High running backs to play major college football, with Kaufman and Canley both being selected in the NFL Draft. Coleman, who starred at the University of Washington, also had a brief NFL career. (Taua is entering his junior season at Nevada).

The next great Lompoc back has already arrived and he has a familiar name: Sheldon Canley Jr.

The youngster made waves last year as a sophomore, bursting onto the scene with a dynamic campaign where he led Lompoc in rushing on just 83 carries. He racked up 808 yards and 14 touchdowns in 2019.

Alan and Blaine Johnson's stories began on a farm in Sisquoc. But their passion for drag racing took them all the way to the top of the sport.

Canley's father starred at Lompoc High, graduating in 1986 after he was named the Northern League MVP as a senior in '85. Canley Sr. played two seasons at Hancock College and two more at San Jose State, where he set more than a dozen school records. Canley Sr. was selected by the San Francisco 49ers in the 1991 NFL Draft and also signed with the New York Jets and Denver Broncos.

The 5-foot-10, 175-pound class of 2022 running back picked up an offer from Nevada this week, the first FBS school to extend an invite. Canley Jr.'s first offer was from William & Mary, an FCS program.

"It was exciting," Canley Jr. said of the Nevada offer. "It came out of nowhere kind of."

Nevada has been known to recruit the Lompoc area. Vai Taua starred at Nevada after playing at Cabrillo and is now the Wolf Pack's running backs coach, where he coaches his younger brother Toa.

"Wow, the Nevada Wolf Pack offer is awesome news for the CanFam," Canley Sr. said. "This offer really shows my son that his student-athlete journey is just beginning. His work ethic on and off the field, must and will remain a constant through this entire process and beyond. But more importantly, have fun with all of it."

Sheldon Canley Jr. is the third of Canley Sr.'s sons to play at Lompoc High, following older brothers D'Artagnan and Dallas. Canley Sr. has been active in his youngest sons football upbringing.

Bailey: Are area schools on the right track in restarting?

Canley Jr.'s sophomore season ended with flourish after a slow start. He had just 72 yards on 17 carries through the first five games, then erupted with 105 yards on just five carries against Santa Ynez, scoring two touchdowns in the sixth game of the year. He then had 169 yards on just 10 carries against Dos Pueblos. Against San Marcos last October, Canley rushed for 272 yards on 12 carries with four touchdowns. He scored four more times the following week against Cabrillo, finishing with 128 yards on the ground.

"Sheldon doesn’t say much. He is strictly business, humble and loves football," Lompoc coach Andrew Jones said. "There’s obviously a football pedigree in his family and I believe last year he was just scratching the surface. We expect him to carry the load for us this season."

"Lompoc High has always had a rich history of running backs," Jones said. "I don’t think it’s anything extra special we do as a coaching staff. As young kids growing up in this town, they come to Lompoc High aspiring to be the next great football player."

Canley Jr. has been working out at home and on the beach since the coronavirus pandemic put a halt to all athletic events in the area. Canley says he's really focused on sharpening his skill-set as an all-purpose back.

"I'm mostly focused on catching the ball out of the backfield and using my hands," Canley Jr. said. "And staying in good condition."

Lompoc’s Sheldon Canley speaks after being named Male Athlete of the Week on Monday. He scored four times and rushed for 272 yards in win at San Marcos. @LompocFootball @Canley2220 #santamariatimes pic.twitter.com/zDaFdMnODt

Canley Sr. was a triple-threat at San Jose State as one of the top all-purpose performers in the NCAA in his senior season, piling up yards rushing, receiving and in the return game.

Canley Jr. says he has some goals set for this year himself: "I'm trying to shoot for 2,000 yards and 30 touchdowns," he said.

The Braves are scheduled to return to offseason conditioning on Tuesday.

"It's going to be cool. I hope everyone is in shape, the whole team," Canley Jr. said. "I'm just ready to start playing again."

“Cal State Monterey Bay is the school I wanted to go to,” Armani said. “I didn’t want to go anywhere else.”

The white sign features 'Huyck Stadium' in blue lettering. A circular emblem above the sign will continue to switch between the Lompoc Brave logo for LHS home games and the Cabrillo Conquistadore for CHS home games. The old 'Huyck Stadium' sign was also blue on white but featured a blue outline.

After waiting all of 2020 to get back in the ring for an actual professional bout Dato, cruised to victory in a lightweight match held in Rosarito, Mexico.

Lompoc's Sheldon Canley Jr. carries the ball against St. Joseph on Sept. 27, 2019. Canley had 808 yards on 83 carries with 14 touchdowns last season as a sophomore. He's back and ready to carry the offensive load in 2021.

Lompoc's Sheldon Canley gets loose for a long touchdown run as Dos Pueblos' Josh Navarro and Daniel Santacruz chase during a game on Oct. 11, 2019. Canley had 169 yards on only 10 carries in the Braves' 56-0 win over Dos Pueblos last year.

Sheldon Canley of Lompoc runs for a first down in the first half of a Division 5 playoff football game against Glendora at Citrus College on Nov. 8. Canley earned First Team All-Channel League honors as a sophomore.